Physical Sciences
Solid materials come in many different varieties, from highly rigid, ordered crystalline materials to the more slippery, irregular world of amorphous solids. While we have good theories for understanding the properties and behaviour of crystalline materials, the disorder in the structure of amorphous solids makes their fundamental physics complicated to understand. However, Professor Hideyuki Mizuno at the University of Tokyo has been using computational simulations to understand why and how the imperfections in these materials make them so interesting.

Properties of solid materials not only come from the chemical elements present, but also largely from the arrangement of those atoms within the solid. Unlike molecules, that may be composed of an isolated single arrangement of ten or so atoms, solids are usually made up of repeating structures of hundreds of atoms, much like shapes that have been tessellated thousands of times.

The repeated atomic motif found in solid materials is known as a unit cell, which is the smallest repeating unit that describes the full symmetry of the overall solid. For crystalline materials, such as most metals, snowflakes and even silicon in computer chips, the underlying structure is highly regular. These microscopic properties in turn affect their macroscopic, physical properties, meaning they have sharp, well-defined melting points and are often rigid.

For many applications, such as energy generation, we are interested in the ability of the solid to transfer heat, and how efficiently we can do this by tuning the atomic structure of materials. The atoms in a molecule are never at rest, even under the most freezing conditions. Instead, they are in constant movement, with some of this energy and motion being trapped in what are called vibrational modes.

As the temperature of the material increases so do the amplitude of these vibrations, or phonons as the large cooperative movements of many atoms in a solid are called. These phonons, or vibrational modes, are very important as these are what help to move the heat energy through the material. For regular crystalline solids, the positions of atoms around which they vibrate are well-defined and we have several theories to describe the types of vibrational modes and their frequencies and from which we can predict the overall properties and behaviour of the system as a whole.

This makes it possible to watch the atoms dance as energy is transferred through the structure.

However, what Professor Hideyuki Mizuno at the University of Tokyo is interested in are materials that are not so well behaved. There is a large class of materials known as amorphous solids, where the entire solid structure cannot easily be produced with a single unit cell. This is because there are defects, or imperfections, in the structure that reduce its overall symmetry and order. Although many materials, such as glasses, have this type of structure, we only have a limited understanding of how this influences the heat transfer properties of the material or exactly what the role of the molecular vibrations is in the underlying transfer mechanisms.

Amorphous descriptions
While glasses are the typical example of an amorphous solid, many other materials such as plastics, ceramics and asphalts also have the underlying structural irregularities characteristic of these types of materials. These defects, or structural inhomogeneities, can be exploited to change their physical properties such as elastic stiffness and heat conductance.

Professor Mizuno and his team at the University of Tokyo are experts in creating computational models to describe these complex systems that can be used to explore their underlying physics. In such molecular dynamics simulations, each atom is described as a small sphere with a given charge which can interact with the other atoms through a potential, a way of modelling the forces that the atoms exert on each other.

A particular temperature and amount of energy is included in the system as the beginning of the simulation that then evolves as a function of time. By calculating different properties at different time steps, it is possible to visualise the transfer of energy throughout the solid and even follow the movement of all the atoms, making it possible to watch the atoms dance as energy passes through the structure by exciting the vibrational modes.

Molecular dynamics simulations are an incredibly powerful tool for these irregular systems, that cannot be described using analytical mathematic calculations due to their randomness. They also make it relatively easy to explore ‘chemistry on the computer’, where atoms can be exchanged for other elements or the density of atoms can be increased, and by running the simulation, we can see how this affects the overall properties of the material. This is why molecular dynamics simulations are popular not just in materials design but also as a tool for pre-screening drug candidates in the pharmaceutical industry.

This work has found new ways to model and describe the physics of these low frequency modes in amorphous systems.

What is special about the types of simulations that Professor Mizuno does is that he is able to use large-scale numerical simulations to look at the underlying physics in the material. First, he has to create an accurate description of the system, in terms of the number of atoms and their positions and then he can look at how the low frequency modes of the system behave by manipulating or applying stresses to the system, in the process finding new ways to model and describe the physics of these low frequency modes in amorphous systems.

Vibrational transport
In his simulations, Professor Mizuno has been painstakingly investigating how the material response and properties change on going from highly ordered crystalline systems to defect-filled amorphous ones. By a rigorous analysis of the vibrational modes, and thermal conductivity, Professor Mizuno discerned that properties of the vibrational modes and heat transfer are highly dependent on the amount and type of heterogeneities in the solid. This is because defects change the complexity of the types of motion associated with the vibrations in the system, which also makes them more localised to specific areas of the solid.

Somewhat surprisingly, he also found that, for the amorphous systems, there are heterogeneities which are not restricted to local sites but which show the signature of the localised defect vibrations even at the macroscopic scale (the continuum limit). Such defect vibrations, which never exist in the crystalline systems, are specific to the amorphous systems. They disturb the energy transfer in the materials and reduce the heat conductivity.

Professor Mizuno’s work represents a huge development in our understanding of how the local structural inhomogeneities in amorphous systems do actually affect the overall properties of the material: they behave differently in different scales and form a ‘multi-scale structure’ in the amorphous systems. These findings provide us with new tools that can be applied to many amorphous systems, such as silicate glasses, metallic glasses, plastics, ceramics and asphalts that are widely used in the basic sciences and engineering.

What is the greatest challenge in creating these types of simulations for amorphous materials?

<> For crystalline materials, we can focus on a unit cell thanks to their periodicity and symmetry. However, for amorphous materials, we cannot get such benefits and we need to consider the whole system and simulate all the constituent particles. Particularly, in order to study the lower frequency vibrations, we need to analyse the larger system. Up to now, we have accomplished this task on ‘packing type of glasses’ where the interparticle potential is relatively short-ranged. However, we need more efforts for ‘network type of glasses’ such as silicate glasses where we handle the long-range potential, the Coulomb potential.

Insights into the complex world of amorphous solids was last modified: January 8th, 2020 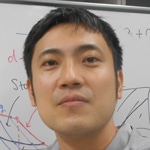 Hideyuki Mizuno is an Assistant Professor of Graduate School of Arts and Sciences at The University of Tokyo, since 2016. He earned a PhD in Engineering from Kyoto University, Japan, in 2012. He was postdoctoral fellow in The Université Grenoble Alpes, France, in 2012 to 2014 and German Aerospace Center, Germany, in 2014 to 2016.