Biology
Sloth bears are considered to be one of the most dangerous mammals in India. The number of sloth bear attacks annually rivals and may even exceed the total number of all bear attacks from the seven other extant bear species combined. Communities sharing their environment with these bears need clear-cut advice on how to behave to avoid bears and what to do in the event of an encounter or attack. To determine a safety protocol, Wildlife SOS interviewed over 350 people who had been involved in an encounter or attack. The team, led by Thomas Sharp, found that sloth bears only attack defensively. The interviews were used to formulate coherent advice on how best to avoid encounters or behave in the event of an attack.

Of the four bear species present in India, the sloth bear (Melursus ursinus) is the only one dispersed throughout mainland India. This medium-sized black bear has long and shaggy fur, a mane around the face, and large claws shaped like sickles. They can live in a wide range of habitats, from dry tropical forests and savannahs to scrublands and grasslands.

Despite this wide range of habitats, sloth bears are currently under threat due to severe habitat loss, the killing of nuisance bears, and poaching. As a result, the International Union for Conservation of Nature lists this bear as Vulnerable. Conservation efforts are essential to maintain stable population levels.

An important step to achieving these conservation goals is to maintain a low level of human-bear conflict. This is a delicate situation, as sloth bears can be aggressive towards humans and are considered by many to be one of the most dangerous animals in all of India. Not surprisingly, human-bear incidents often escalate into retaliatory killings, undermining efforts to conserve this species. 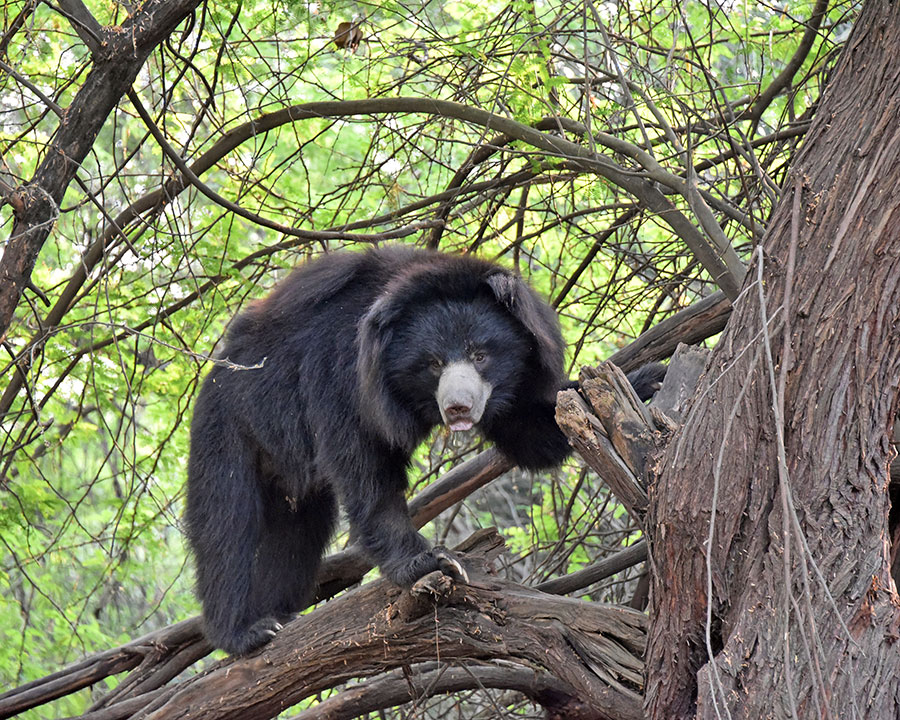 Contact with sloth bears
Thomas Sharp and the team at Wildlife SOS believe that one main problem is that local people do not know how to behave around sloth bears. There is currently no clear-cut message explaining the safest way to behave in the event of an encounter, or how to respond if the bear starts charging. Sharp believes such a message would help people better understand these animals: “Chronicling human-sloth bear conflict is only the first step to resolving conflict. Once we understand the nature of these events, we can then determine the best ways to avoid attacks, as well as how to behave during an attack.”

The results of the study clearly show that the vast majority of bear victims were alone and quiet.

To better understand human-bear interactions in the wild, and to develop a behavioural safety plan to reduce the risk and severity of bear attacks, Wildlife SOS interviewed 362 people in their native tongues in the southern Indian state of Karnataka in 2016. Between the years 1985 and 2016, the interviewees had been involved in a close encounter with a sloth bear, were attacked by sloth bear, or witnessed an attack where the victim did not survive. This is the only sloth bear attack study which interviewed people who had close encounters with bears but were not attacked. This was an important component because the team was attempting to discern why some encounters ended in an attack and others ended in the bear simply running off without attacking.

Why do sloth bears attack humans?
The study clearly revealed that sloth bears only attack defensively, and never predatorially. In other words, sloth bears only attack humans because they are attempting to neutralise what they perceive as a threat, not because they see people as food. This behaviour likely evolved over hundreds of thousands of years living amongst large carnivores, such as tigers, that pose a mortal threat. In fact, the team was unable to document a single predatorial sloth bear attack, even after combing through literature going back over 100 years.

However, local people sometimes perceive these attacks as predatorial. This is understandable, as the victims of these attacks can feel ambushed. Often, the first thing that they see is a black mass loudly charging them. It is hard to understand why the bear did not simply run off. However, the bear likely did not notice the person’s presence until the person was relatively close to the bear. Additionally, there are a few documented cases of sloth bears chewing on or even eating portions (usually the arms) of their victim’s corpses. Sharp believes this is a predominately opportunistic behaviour on the bear’s part and not the initial purpose of the attack. Yet, it is easy to understand how these actions can lead people to believe that the attack was predatorial. Additionally, when sloth bears attack they tend to focus on the victim’s head and neck, as this is a quick way to neutralise the perceived threat. Interestingly, brown bears (Ursus arctos) are known to do the same thing when they attack people. 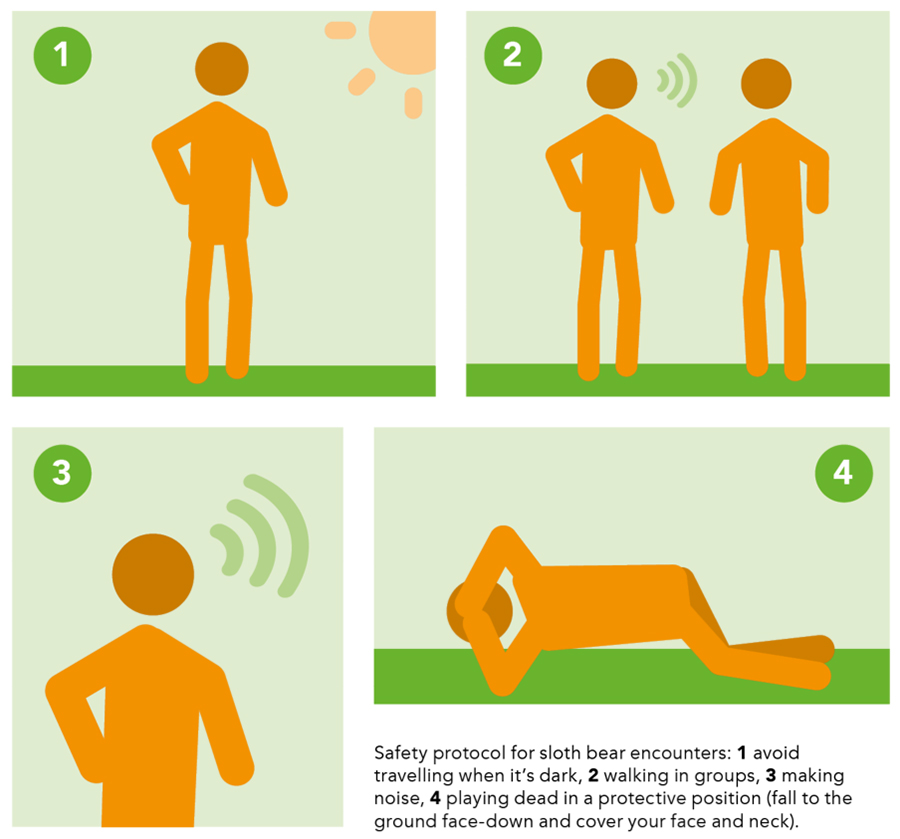 The typical diet of sloth bears seems to corroborate the team’s findings. There is no fresh red meat on the menu, and these bears much prefer a meal of termites, ants and some fruit. Though they will occasionally scavenge on carcasses, this appears to make up a very small portion of their diet.

Avoiding sloth bears in the wild
From all the interviews conducted, Sharp firmly believes that the best solution to minimising sloth bear attacks is to avoid sloth bear encounters altogether. This means walking in groups of at least two people and making noise to ensure the bear is aware of human presence. It is also advisable to avoid travelling in darker hours. While the Wildlife SOS team studied the best ways to deescalate an encounter or survive an attack, it’s simply better if the encounter never happens.

The results of the study clearly show that the vast majority of bear victims were alone and quiet. These individuals are much more likely to surprise a bear and thus be attacked. Bears are simply much less likely to be surprised by or attack a group of people making noise rather than an individual quietly moving through the forest. However, it is important to note that the advice of grouping up only works if people are close enough together to hold a conversation comfortably.

Again, it must be stated that if one can avoid a bear encounter by walking in groups and making noise, the advice on how to best defend oneself in the event of an attack becomes less necessary. “Making noise while moving through sloth bear habitat helps to avoid sloth bear encounters and attacks, and the encounters that still do take place are less likely to turn into attacks”, said Sharp. “If the bear is not startled in close quarters, its preference is to leave the area without incident.”

It is likely that if the victims used a protective position when falling to the ground, they would have suffered fewer injuries.

Run, fight or play dead?
Unfortunately, it is not realistic that all bear encounters can be avoided. So inevitably it must be addressed as to what to do when encountering or being attacked by a sloth bear.
The study found that fighting the bear had approximately a 9% rate of fatalities, and running away was found to be even worse, with 11% fatalities. This is not surprising, as fighting or running triggers a response in sloth bears, just as it does in grizzly bears. On the other hand, falling to the ground and covering face and neck was the safest option, with no recorded fatalities. If the goal is simply to survive, then falling to the ground and covering up may be the best advice.

However, the story is not this simple. When fatalities and serious injuries were combined, all three options resulted in a similar 20% of victims killed or seriously injured. Nevertheless, victims who opted to play dead suffered more moderate injuries than those who ran away or fought back.

“It is likely that if the victims used a protective position, as those prescribed for grizzly bears, when falling to the ground, they would have suffered fewer injuries”, said Sharp. “Therefore, it is at least possible that if people were taught how to properly protect their head and neck regions from injury, the severity of injuries would lessen. However, similar to brown bear defensive attacks, the victim of the attack can do everything right, including falling to the ground and covering up, and still be injured.”

For Sharp, studies such as this are vital in developing a strategy to ensure harmonious coexistence with sloth bears. They can help to formulate practical advice which can then be passed down to those living alongside these bears. He said: “We know that if these best-practice guidelines are adopted, both people and bears will enjoy a more peaceful coexistence. India without sloth bears would be a loss for everyone, so it is our hope that this work will contribute positively to both their future and human safety.”

From these results, what is the best advice you can give to populations who live near sloth bear territory?

<>When you are in sloth bear country if at all possible do the following things:

2. If you encounter a bear

3. If the bear charges you

How to behave in sloth bear territory was last modified: June 23rd, 2021 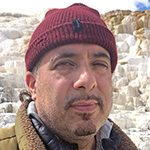 Thomas Sharp is a wildlife ecologist with Wildlife SOS with more than 25 years of experience in wildlife conservation and natural history research. He is presently the Director of Conservation and Research for Wildlife SOS. He also serves on the IUCN’s Bear Specialist Group as a co-chair of the Sloth Bear Expert Team.

Wildlife SOS interviewed people who had encountered or had been attacked by sloth bears, in order to determine a behavioral approach to safety.