Behavioural Sciences
By law in France no data about ethnicity or religion is recorded in official statistics. The homegrown, pseudo-religious Islamically-inspired terror attacks of the 21st Century have, in part, been seen as a result of a lack of geographical and economic integration among Muslim populations. The research of Lucas G. Drouhot, research fellow at the Max Planck Institute for the Study of Religious and Ethnic Diversity, aims to better understand processes and mechanisms relating to integration. In particular, he uses new data and spatial methods to study patterns of urban segregation of Muslim communities, to see whether the commonly held belief of Muslim segregation into religious “ghettos” within certain low-income “banlieues” areas holds in reality.

The urban segregation of Muslim-origin populations has long been a source of concern in political discussions as well as to the general public in Europe, especially those living in areas with high levels of Muslim populations. This has been particularly true within the last decade, and following certain religiously-motivated homegrown terror attacks in Europe linked to radicalised Islam in certain impoverished urban areas.

In France, these societal debates have revolved around the “banlieues” (roughly equivalent to “suburbs”) which are the poorer urban areas at the outskirts of large cities and the main concentrations of the post war migrants and their children from France’s ex-colonies in North and Sub-Saharan Africa. Islam in France has historically been associated in popular consciousness with the idea of the segregated banlieues, and sometimes described through a narrative of “parallel societies” divorced from the cultural mainstream by conservative pundits and politicians.

Indeed, after the 2015 Charlie Hebdo terror attacks, even the then centre-left prime minister went as far as to refer to a form of “spatial, social, and ethnic apartheid” to explain that the terror attacks resulted from alienation and socio-spatial separation. One of the big questions that Lucas G. Drouhot, research fellow at the Max Planck Institute for the Study of Religious and Ethnic Diversity, Göttingen, seeks to answer is to what extent Muslim populations have moved into more central and affluent areas, and whether the narrative of Muslims isolated in religious “ghettos” in certain banlieues actually holds true.

Why is this study important?
One of the biggest problems for researchers investigating this topic in France is that the data simply does not exist, and no empirical study to confirm or inform on that narrative has hitherto been possible. Whilst racism and racial discrimination certainly do exist in France, the French Constitution prohibits recording citizens’ “race”, religion, or ethnic origin. Additionally, there is a great sensitivity to do so; the last time this was done was during the Vichy regime during World War Two, when it was used to classify Jews, and during the somewhat shameful French colonial era in Africa. However, over the last twenty years or so, there has been growing pressure to record “ethnic statistics” in order to address some of the problems outlined above.

From the inception of an ethnicity question on the census in the early 1960s until the 1990s French residents were recorded in census data as either as French nationals or foreigners, though their countries of origin were mostly limited to binary categories of EEC and non-EEC. At the turn of the century, a new question was put on the census of the nationality of parents, which is useful in tracking ethnicity though does mean that third generation and beyond are not recorded as minorities.

The urban segregation of Muslim-origin populations has long been a source of concern in political discussions as well as to the general public in Europe.

It was around this time that the controversy of “ethnic statistics” really blew up, with its consideration being denounced as a “drift towards racism” by one side, and a necessary statistical tool to help in the fight against racism and Islamophobia by another, with all parties quite vociferous and passionate in their opinions. Other researchers also demanded the change of the category of “foreigner” to “immigrant”.

To circumvent the historical lack of official statistics on France’s ethnic and religious minorities, this study focused on places of interest to Muslim populations, which could be mapped and compared to income census data aggregated by local, fine-grained spatial units. All previous large-scale data on self-identified Muslim populations did not include location information.

How was it done?
Firstly, Dr Drouhot gathered a spatial dataset (called MAPISLAM) to study the question, the first dataset of its kind. The data uses an exhaustive census of halal butchers, Muslim bookstores, mosques and prayer rooms, and Muslim schools in Paris, Lyon and Marseille, cities which together feature almost two-thirds of the Muslim population in France. The data was harvested from various online France-based Muslim internet portals that feature user-generated listings of Islamic institutions serving the Muslim community, which was then verified through Google Street View or telephone contact with the location, with “verification rates of 87% of halal butcher shops, 74% of religious bookstores, 41.2% of mosques and prayer rooms, and 78.3% of religious schools”. 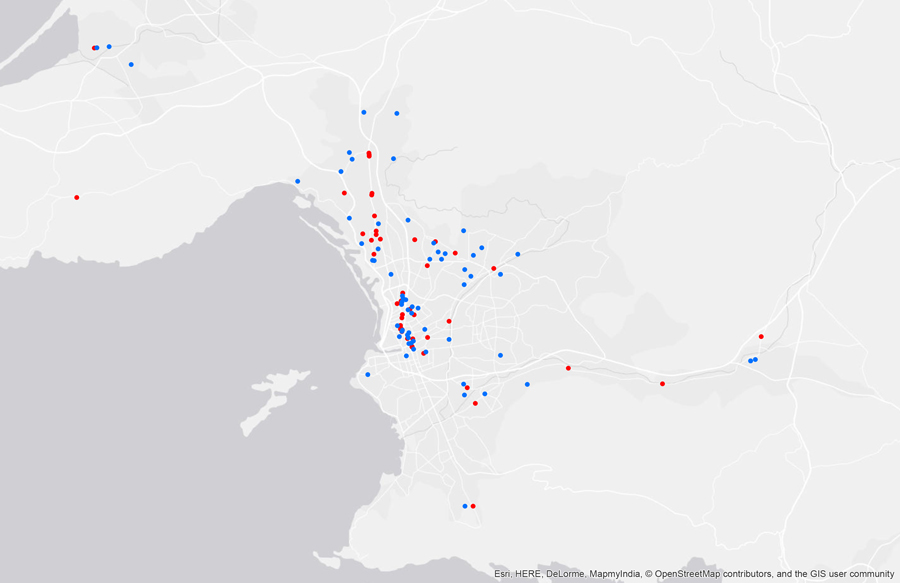 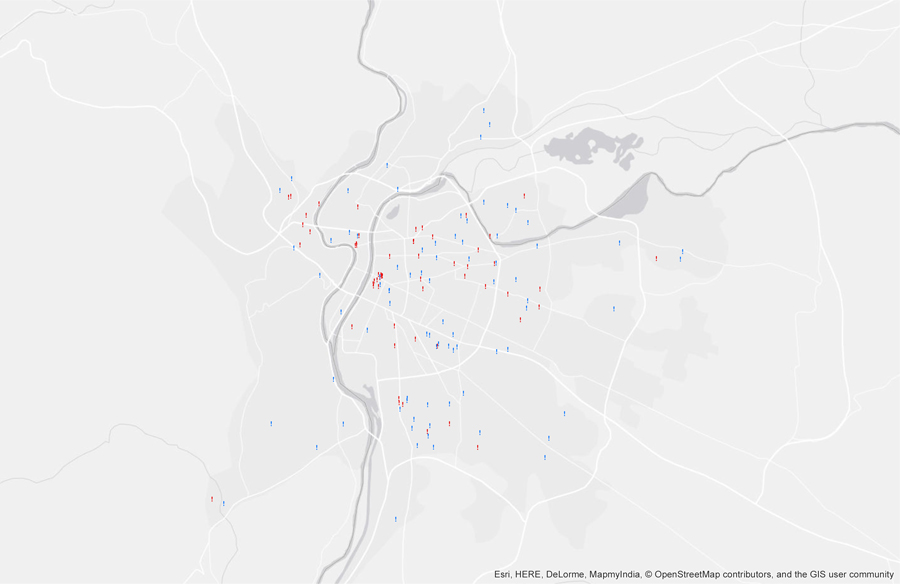 The study, which focused on the Paris urban area, utilised spatial analytical techniques to test the “parallel societies” narrative, namely by seeing if Muslim institutions are clustered in specific ways in the so-called “banlieues”. This is done by way of road network analysis which is a technique mapping space according to constraints from the built environment and not “as-the-crow-flies” distances, to see how different institutions’ catchment areas overlap and form institutionally integrated clusters, and by comparing the spatial distribution of Muslim institutions to data from the French census on income segregation by census tract.

The idea that Islam in Paris is mostly restricted to the impoverished “banlieues” is not quite true.

What does it show?
This research indicates two things. The first result was that we do find integrated clusters of religious institutions – namely halal butcher shops, religious libraries, mosques, and religious schools – but these institutions are also well-represented within Paris proper. Therefore, the idea that Islam in Paris is mostly restricted to the impoverished “banlieues” is not quite true. There exists a strong cluster in the 11th Arrondissement, for example, in the east of the city, which is generally seen as a desirable area to live due to its vibrant atmosphere featuring many bars and restaurants. However, the data also “suggests that the spatial distribution of Islamic institutions follows broader dynamics of income segregation within the entire metropolitan area, with a strong presence in the markedly poorer areas of the southeast, east, and north and little presence in the wealthier areas of western Paris and suburbs where the economic elites reside.”

The second major result was that the comparison with census data on income show that income inequality forms the basis of the spatial distribution of Muslim institutions in a fairly precise way. Hence, Dr Drouhot concludes that the spatial integration of Islam in the Paris area is better than commonly thought, but moderated by broader dynamics of income/class inequality. Despite urban mainstreaming suggested by a substantial presence within the city proper, the spatial integration of Islam thus remains incomplete.

As Dr Drouhot summarises; “Given the salience of such a key aspect of social inequality, the aggregate spatial pattern characterising Muslim institutions in the Paris metropolitan area at large is one of incomplete integration.”

How do you calculate the “catchment area” of a particular institution? Are the numbers of users of these institutions who are willing (or able) to travel larger distances insignificant?

<> The catchment areas were calculated on the basis of a 300-metre radii for butchers, mosques, and bookstores and a 500-metre radii for schools. The road-network technique then takes each geolocated point as its centre and draws the polygon boundaries using the radius constraint and the constraint from the physical built environment.

The goal of this technique is to replicate and model spatial usage as it occurs in reality rather than distance spanning physical obstacles (e.g. building, roads, bridges) that one cannot simply fly over when moving about in the city in real life. The assumption regarding the catchment area is that these institutions are used on a regular basis by religious individuals, even though it is well-known that the Muslim community is very heterogeneous in terms of religious observance and practices. Nevertheless, we know most individuals who self-identify as Muslim do follow dietary constraints imposed by their religion, such as abstaining from alcohol and eating halal food for instance. Hence, the presence of halal butchers should act as a reasonable proxy for the presence of Muslim individuals in the surrounding neighbourhood. The logic for schools and prayer rooms and libraries are largely similar. Hence, these institutions are unlikely to be a perfect proxy, but it is even more unlikely that they are orthogonal (statistically unrelated) to the spatial distribution of Muslim populations themselves.

Lucas G. Drouhot is a postdoctoral research fellow at the Max Planck Institute for the Study of Religious and Ethnic Diversity (Göttingen, Germany), with substantive interests in international migration, social networks, and social stratification. His current research agenda focuses on social diversification and the incorporation of the children of immigrants in Western Europe and the United States.

Lucas Drouhot’s research aims to understand the processes and mechanisms shaping the incorporation trajectories of immigrants and their children in Western societies.

Gathering the data was made possible by a seed grant from the Center for the Study of Economy & Society at Cornell University.