Physical Sciences
A very hot and current scientific topic is the synthesis of active pharmaceutical ingredients (APIs), the burning question being “how can we make API synthesis efficient?”. A big step towards the answer was taken by Dr Guillaume Journot, senior scientist at Servier, France, and Dr Jean-François Brière, a CNRS senior research scientist at COBRA laboratory in Rouen, France. They proved that collaboration between academia and industry is key for progress in organic synthesis, showcasing the activation of C-H bond using metals, and improving the atom economy of the synthesis process.

Two of the most commonly used terms in science, in recent times, are ‘large-scale manufacturing’ and ‘collaboration’. Moving away from bench scientific advancements for the sake of science, researchers are now focusing on taking the next step and introducing their findings on an industrial level, where number of steps in a process matter and the cost of reagents (compounds added to a system to cause a chemical reaction) must be kept at a minimum. The time of a reaction translates to money, and by-products can lead to substantial handling fees. The question of “how can we transfer API production from laboratory to industry?” is on everybody’s lips, especially given the evergreen and pressing needs for pharmaceuticals.

Based on the differences in structure and goals between academic research and R&D departments of companies, the answer can be revealed through collaboration between industry and academia. A very interesting area of research in organic synthesis is the synthesis of active pharmaceutical ingredients (APIs) from simple starting compounds. There are several steps to be followed, which break or connect chemical structures and swap molecules in existing bonds. These can result in the pure target compound, or a mixture of it with several other by-products. It could even result to the target compound and its ‘identical but evil twin’, attributed to mirrored chemical structures of the same compound. That was the case with the drug thalidomide and the 1960s scandal around its dual action as over-the-counter remedy and teratogenic.

Towards the difficult task of making organic synthesis more sustainable and industrially applicable, scientists are trying to develop new techniques for faster, better and greener reactions, keeping atom economy in mind – a concept that describes how efficient a chemical process is, i.e. how many reactant atoms actually become useful atoms of the final products.

The science behind bond activation
The majority of active pharmaceutical ingredients are nitrogen-containing molecules, including a number of carbon-nitrogen (C-N) bonds within the molecule’s chemical structure. Although seemingly trivial, the formation of C-N bonds is tricky and has been keeping synthetic chemists busy for many years. In many cases, chemical reactions towards the formation of a target compound from a given substrate start with bond activation. The concept of ’bond activation’ refers to the creation of certain chemical conditions for a given substrate, a starter if you will, to transform its structure to a different molecule by the cleavage of carbon-hydrogen (C-H) bonds and the creation of C-N bonds, using an existing C and N from the backbone structure, which initially were not connected.

The formation of C-N bonds is tricky and has been keeping synthetic chemists busy for many years.

This process can be conducted through several approaches, but the current focus is on the use of transition metals (groups 3 to 11 in the periodic table) acting as catalysts, basically promoting this ‘molecular swap’. Within the family of transition metals, special attention is given to palladium (Pd)-based catalysts. This is due to their ability of easy tuning of their reactivity and electronic environment, without this tuning affecting further compound transformations needed for the progression of the chemical reactions. Upon the introduction of Pd, the C-H bond transforms to a C-Pd bond, with Pd being also connected to a N, resulting in a -C-Pd-N- intermediate structure, namely ‘palladacycle’, meaning literally ‘a circle around Pd’. In this way, the previously dual-ended chemical structure becomes connected, using Pd as the connecting agent. This bond formation is scientifically named ‘intramolecular’, as it occurs within the same molecule. The ability of Pd to displace H from the C-H bond and create a C-Pd bond marks the activation of the C-H bond or, in different terms, the functionalisation of the bond.

Is C-H activation the end?
The next logical step towards the C-N bond formation is the activation of the N-H bond. One H is removed from the neighbouring –NH2 auxiliary, and upon Pd removal, the C-N bond can be formed (through the so-called reductive elimination step). Although simple and straightforward in thought, the achievement of the C-H and N-H activation is rather complex. In an effort to untangle the complexity, a collaboration between academia and industry aims to shed light on a novel synthetic pathway towards Coversyl, a well-known, anti-hypertensive drug with wide use across the world. Based on the findings of this collaboration, synthesis of Coversyl could be materialised using very cheap starting reagents and a greener approach. The academic member of the collaboration, Dr Jean-François Brière, is a CNRS senior research scientist at the COBRA (Organic Chemistry, Bioorganic chemistry, Reactivity and Analysis) laboratory, part of the Rouen Normandy University in France, also supported by the National Centre of Scientific Research (Centre National de la Recherche Scientifique – CNRS) and INSA Rouen Normandy. The industrial collaborator is Dr Guillaume Journot, senior scientist at Servier, France. Thanks to the financial support of both the region of Normandy and the local industrial partner, the joint-laboratory IDECHEM between ORIL Industrie (Servier’s subsidiary production site) and COBRA laboratory was initiated in 2017, focusing on a ‘win-win’ approach for both parties. Within this consortium, their collaboration investigates more sustainable chemical reactions by exploring reaction mechanisms and is trying to reduce the required steps towards a product, or employing a modern catalysis approach n order to identify more efficient routes to pharmaceutical intermediates.

Key outcomes of this collaboration include improvement of employment in the region, securing a strategic position of the company on the market and producing high-value research publications and patents. In their latest publication, Dr Brière and Dr Journot investigated – with the help of their respective teams – the use of a simple and cheap initial substrate, a phenylalanine ester, to produce a specific organic compound, indoline, a precursor for the API present in Coversyl. They compared existing methods for the synthesis of the specific precursor with their novel approach of one-pot synthesis, and investigated the effect of a series of reagents to the end product in terms of yield. Starting with the already existing methods, they used phenylalanine ester as substrate and explored the formation of different palladacycles depending on the Pd-based catalyst used. From there, using Buchwald phosphine ligands, specific phosphorous-containing compounds first defined by S. Buchwald’s group of research, they resulted in subsequent intermediates. Treating those intermediates with a base in order to deprotonate (remove a proton) them resulted to an indoline, the precursor of Coversyl.

Moving away from the existing methods, which usually require extra-activation by functionalities on the nitrogen atom to activate the N-H bond (which compromises the atom economy), they showcased a one-pot synthesis procedure for this precursor from the same substrate (phenylalanine ester), using the reagents previously mentioned, plus two extra ingredients, silver trifluoroacetate and 1,4-dioxane. They resulted in the same end product by cutting down the process steps and time needed, while improving atom economy.

Beyond reductive amination
While ensuring that the end product could be achieved, Dr Brière and Dr Journot looked deeper into the reaction specifics. They explored the effect of various Pd-based catalysts, several phosphine ligands, variations in temperature and duration of the experiment, and the presence – or lack thereof – of a base for treatment at the final step, in an effort to identify the ideal combination leading to the best results in terms of end product yield and by-products formation, as determined by NMR.

Joint efforts between industry and academia showed that there is strong potential for a more sustainable approach to traditional synthesis routes.

In order to dive deeper into the explanation of the C-H / N-H bond activation and C-N bond formation, and thanks to scientific specialists in mechanistic investigations (Prof Afonso and Prof Gandon) and collaborators of Dr Brière and Dr Journot, the team employed Density Functional Theory (DFT) calculations to assist with their experimental observations. DFT is a computational modelling method based on quantum mechanics, which can be used to investigate the electronic structure of atoms and molecules. In this case, DFT calculations were used to unravel the free energy profile of a key intermediate, in an effort to find explanations for the divergent route observed in the expected reaction pathway. What they found is that this particular intermediate, in presence of residual quantity of the initial substrate, led to divergent routes, away from the production of the expected end product (indoline). They attributed this behaviour to the nature of counterion presence of some of the reagents explored. Having this knowledge at hand, through rigorous experimentation they identified reagents with weaker counterion effects and conditions that could lead to more favourable outcomes.

In conclusion, joint efforts between industry and academia towards the revelation of mechanism insights showed that there is strong potential for a more sustainable approach to traditional synthesis routes. Using a combination of experiments and simulations, Dr Brière, CNRS researcher from Rouen Normandy University, and Dr Journot from Servier reported the first description of a deprotonative intramolecular amination reaction of NH2-bonded phenylalanine-derived palladacycles. They shared a detailed and evidence-supported screening of conditions that can lead to the formation of the wanted end product in a significant yield, avoiding unwanted by-products, and set an important precedent for further exploration of C-H amination reactions through modern metal-based catalysis approaches.

How did the collaboration between ORIL industrie and COBRA laboratory come about?

<>The collaboration started a decade ago with projects on pharmaceutical intermediates. We then developed a long-term but contemporary strategy that could benefit the both of us. For industry, it is an opportunity to reinforce innovation in R&D, e.g. employing cheap, natural starting materials or reducing our environmental imprint. The academic partner can push the limit of their fundamental tools and knowledge. But the joint laboratory IDECHEM goes far beyond C-H activation, by triggering multiple collaborations with teams in photoredox catalysis, flow and analytical chemistry! Those partnerships are fully supported by the region of Normandy concerned with the employment and strategic positions of its industries and universities. 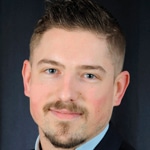 Dr Guillaume Journot gained his PhD under the supervision of Prof Neier in Switzerland. He then moved to California for postdoctoral studies at Scripps Research with Prof Baran and later worked with Prof Trauner’s research group in Munich, Germany. In 2015, Dr Journot joined the international pharmaceutical company Servier where he currently works as a senior scientist in chemical development.

The collaborative project between industry and academia, headed by Dr Guillaume Journot of Servier and Dr Jean-François Brière of CNRS, tackles the challenge of efficient syntheses of established pharmaceutical ingredients.