Physical Sciences
The renewable-fuelled future is reliant on improvements in battery energy density to smooth the grid and power electric vehicles for longer journeys. Lithium-ion cells – the industry standard – are almost at their capacity. Lithium-sulfur cells could be the answer, current technology degrades quickly due to an effect called redox shuttling. Dr Gao Liu, a staff scientist and his team at the Lawrence Berkeley National Laboratory, have taken inspiration from surfactants to redesign electrolytes. Hydrofluoroether (HFE) additives encapsulate lithium ions in micelle-like structures without problematic polysulfides dissolution.

More than 70% of the world’s energy supply is from coal and gas. However, with the price of solar in decline – it dropped 89% between 2009 and 2019 – things are on the turn. Solar, only recently the most expensive megawatt-hours on the market, is now cheaper than gas, nuclear and coal.

However, renewable energy in the U.S. still stood at a rather meagre 10% of all energy consumption in 2019. So what stands in the way of the renewable revolution? 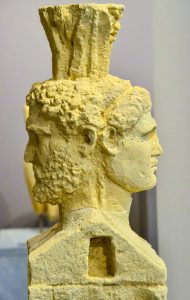 One obvious problem is the availability of these megawatt-hours. Solar panels can only output electricity when the sun is shining, and turbines only turn when the wind is blowing.

The other big barrier is the transportation of this power. Vehicles are a large energy consumer, and the source is almost always fossil fuels.

Li-ion cells: up to the job?
For a world run on renewables, new technology is required which can store energy from intermittent renewable sources. Since lithium-ion cells first hit the market in 2019, they have received enormous investment. Battery packs cost 11% of what they did a decade ago, and are used for industrial electricity storage for grid-balancing down to the mobile phones.

Suppressing lithium polysulfide dissolution in Li-S electrolytes is a means to a very specific end: a viable lithium-sulfur cell.

However, it’s been known for some time that there’s a hard limit on the energy density of lithium-ion cells, in the region of 400 Watt-hours per kilogram.

Without improving energy density, batteries remain bulky, electric vehicles remain heavy, and the grid will remain reliant on non-renewables. Breaching the 400 Wh/kg limit requires a re-think of battery technology at a chemical level. 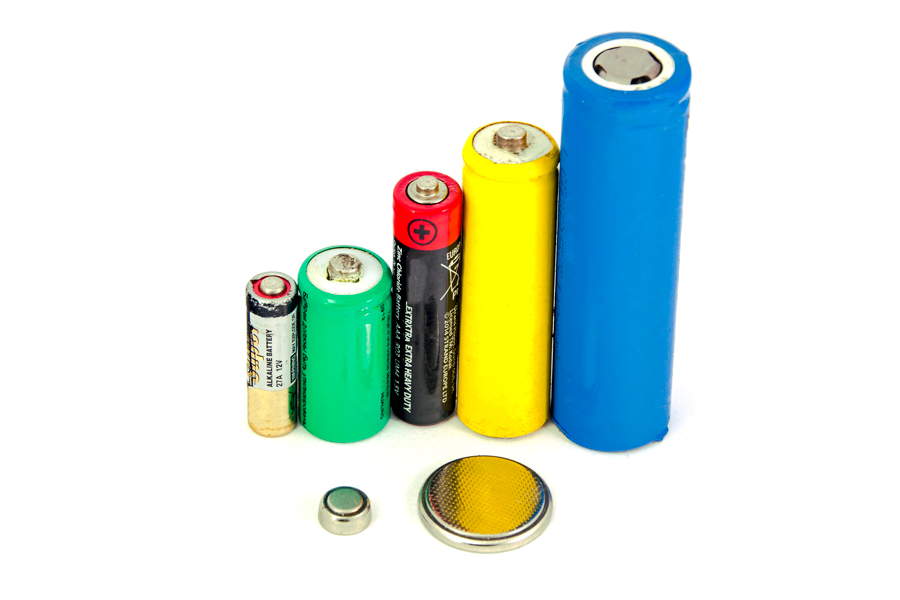 As more lithium travels to the cathode, further reactions occur, forming other lithium polysulfide molecules: Li2Si6, then Li2S4, Li2S2, and eventually Li2S. During charging, the opposite occurs.

Or at least, that’s the theory. Lithium polysulfide Li2S8 and Li2S6 are highly soluble in the electrolyte of the cell. As a result, they diffuse throughout the cell. When a lithium polysulfide molecule reaches the lithium anode, it reacts to form a shorter-chain polysulfide like Li2S4 and Li2S2, depositing some sulfur at the anode.

This molecule can travel between the anode and cathode, picking up atoms from the sulfur electrode and depositing them at the lithium electrode. Over several charge-discharge cycles, this ‘redox shuttling’ effect decreases the capacity of the cell.

Fixing the redox shuttle
Attempts to limit redox shuttling in Li-S cells have generally involved creating a barrier to prevent lithium polysulfide molecules from reaching the anode. However, creating these barriers – for example, by modifying the lithium electrode to only allow lithium ions through – is complicated and costly.

However, the conclusion of much of this research is a resort to high-viscosity solvents which have a problem of their own: poor lithium transport, where slow lithium diffusion leads to poor cell performance.

inspiration from surfactants
The Liu group have recently published a work detailing how they have taken inspiration from surfactants to create electrolytes with “localised high concentrations” of lithium salts. Their work involves using hydrofluoroethers (HFEs), a class of solvents that has previously been shown to preferentially dissolve lithium salts over lithium polysulfides. HFE molecules used up until now have generally contained a central oxygen atom, with fluorinated carbon chains on either side. The oxygen atom binds to lithium, whereas the fluorinated chains are chemically inert.

The Liu group’s most recent research takes this idea one step further, instead of having a single ether bond in a central position of the solvent molecule, they have taken inspiration from surfactants, to use HFEs with an ether section on one end and a fluorinated section on the other.

These molecules are designed to mimic surfactant molecules, which have hydrophobic and hydrophilic sections, allowing the dissolution of oil molecules in water. In the same vein, the ether section of these specialised HFE molecules is considered ‘lithiophilic’ (lithium-loving) and the fluorinated section ‘lithiophobic’. Liu refers to this as a “Janus” structure, in reference to the two-faced Roman god.

Can these form micelles?
The researchers hypothesise that when this HFE is added to a fluorinated solvent, lithium salts are solvated in a special mechanism, involving the formation of nano-sized micelle-like structures. These structures are a shell of HFE molecules, lithiophilic ether sections facing inwards towards a bundle of lithium salts.

Initial tests indicate that these ‘Janus’ HFEs do achieve the holy grail of Li-S cells: high solubility of lithium salt with suppressed dissolution of lithium polysulfide. 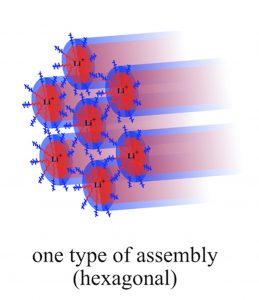 These tests suggest the presence of a new solvation mechanism, proving the existence of micelle-like structures requires a specialist spectroscopic tool, called small angle X-ray scattering (SAXS). This is commonly used in colloid research to identify the size of particles in oil-water suspensions.

SAXS data shows that particle sizes in HFE/TTE solutions differ based on the type of lithium salt, as well as the type of ‘Janus’ HFE molecule used as an additive.

A means to an end
Suppressing lithium polysulfide dissolution in Li-S electrolytes is a means to a very specific end: a viable lithium-sulfur cell. It’s important to ensure that these micelle-like structures are electrochemically stable.

Amphiphilic HFE molecules open up the possibility of efficient, high-capacity cells without needing to compromise on the lifetime of a product.

Key signs of success are coulombic efficiency and cycling stability – in other words, is energy is wasted during charging, and does the cell retain its capacity after repeated charge-discharge cycles? To test these, the group measured the cycling performance of various Li-S cells electrolytes composed of an HFE additive in 1,1,2,2-tetrafluoroethyl-2,2,3,3-tetrafluoropropyl ether (TTE) with different additive/solvent ratios. These were compared to a benchmark electrolyte, DOL in DME.

Crucially, the decay seen in the benchmark electrolyte – a result of its polysulfide dissolution – was largely avoided by the use of HFE additives.

The difference in capacity and coulombic efficiency between the 1:5 and 1:1 ratio electrolytes demonstrates that an excessive amount of HFE additive can prevent lithium from being transported between the two electrodes.

Evidence for superior performance
A final important factor in cell life is the effect of each charge cycle on the lithium anode. To test this, the group created test cells with one lithium electrode – as in the Li-S cells – but replacing the sulfur electrode with a copper one. These tests were designed to establish whether the HFE additives are chemically stable when used alongside the lithium electrode.

These tests demonstrate that the group’s electrolyte is more chemically stable than the benchmark electrolyte. Even after 200 charge-discharge cycles, the coulombic efficiency was above 99.5%, and was only slightly compromised at the highest current densities tested.

“This technology is exciting progress in the world of alkali metal (Li or Na)-sulfur cells,” said Yangzhi Zhao, a postdoc researcher from Liu’s group, “Amphiphilic HFE molecules open up the possibility of efficient, high-energy density cells without needing to compromise on the lifetime of a product – whether that’s long-distance electric vehicles or industrial-scale grid-balancing renewable electricity storage.”

Are amphiphilic molecules enough to suppress lithium polysulfide dissolution, or will additional measures be needed?

<> This work has reported a proof of concept strategy to address critical challenges in Li-S battery by using amphiphilic HFE molecules as the electrolyte. The preliminary result shows effective suppression on polysulfide dissolution and shuttling as well as the additional benefit of Li anode stabilisation. Though promising, the current result is still far from perfect and many fundamental questions still remain elusive about the electrolyte system. For example, we could use simulation method to better understand the micelle formation and solvation mechanism, which provides useful guidance on HFE molecule design. To attempt real application, research and development in other aspects of the Li-S cell system is simultaneously needed. This will require the synergistic strategy by integrating optimised electrolyte with tailored electrode architecture and optimised electrode-electrolyte interfaces. 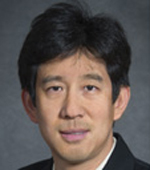 Dr Gao Liu is the Group Leader of the Applied Energy Materials Group at Lawrence Berkeley National Laboratory (LBNL), specialized in energy storage R&D. Dr Liu has over 20 years of experience in developing materials and system engineering for electrical energy storage, and has led research projects for the U.S. Department of Energy and industry. Dr Liu has over 170 peer-reviewed publications and over 20 granted patents. He is the point-of-contact for LBNL and board member for the California battery consortium - Calcharge. Dr Liu also serves as board member and scientific advisor for industry.