Physical Sciences
Dr Katharine Tibbetts (Virginia Commonwealth University) has been developing a novel approach for the synthesis of metal nanoparticles, based on a reactive laser ablation in liquid technique. She uses ultra-short laser pulses to ionise water molecules and generate a highly energetic plasma of electrons capable of reducing soluble metal ions to neutral atoms, which then coalesce to generate a nanoparticle suspension. At variance with traditional chemical approaches based on strong reducing agents and surfactants, the laser ablation technique is fast, environmentally friendly and it can be used to control the nanoparticle size and properties.

Nanomaterials exhibit characteristic structures containing particles of sizes between 1 and 100 nm (1 nm=10-9 m), in an unbound state or in the form of aggregates. Examples of natural nanomaterials include the capsid structures of viruses, some butterfly wing scale patterns and colloidal fluids, such as milk and blood. Synthetic nanomaterials, on the other hand, are engineered and manufactured to have well-defined mechanical, physical or chemical properties, which makes them suitable for technology and in industrial processes. In particular, metal nanomaterials and metal oxide nanocomposites have important applications in optoelectronics, sensing, drug delivery and catalysis. Bimetallic nanoparticles have for instance been shown to be promising catalysts for processes including the water-splitting reaction and the reduction of CO2, and they represent a highly promising path towards sustainable energy generation, storage, transmission and utilisation on a global scale. The enhanced activity of bimetallic nanoparticles has been attributed to synergistic effects between the metals and defect sites in nanocrystal structures.

In order for nanomaterials to be chemically effective, the size of their constituent nanoparticles has to be tightly controlled. For instance, in catalytic processes, smaller nanoparticles yield better catalytic turnover, because the ratio between their surface area (where chemical reactions occur) and their volume is large. Traditional approaches to metal nanomaterial synthesis typically use strong reducing agents to produce nanoparticle seeds and surfactants to prevent excessive growth. Surfactants, however, are toxic and they can have a substantial environmental impact. Furthermore, surfactant molecules can hinder catalytic reactions by binding strongly to a nanoparticle’s active sites and making them inaccessible to potential reactant molecules. Finally, chemical methods are slow, and they require hours, or even days, to grow nanoparticles of the desired size.

Plasma synthesis of nanoparticles with laser light
The reactive laser ablation in liquid method pioneered by Dr Tibbetts and her collaborators offers a powerful and flexible alternative to the purely chemical approaches to nanomaterial synthesis currently in use. It is a fast and “green” method, which generates nanomaterials within minutes, does not require toxic reducing agents and surfactants, and enables the formation of nanostructures with novel morphologies and bonding environments. The key idea of this method is that laser light, rather than a chemical agent, can be used to provide the electrons required to reduce soluble metal ions to their neutral metal atom counterparts, which then assemble themselves to form a nanoparticle phase.

A typical synthesis uses water solutions of metal ions (e.g. Au3+ or Ag+), and it can include a solid target, such as a silicon wafer. Laser light is applied in the form of very short (ca. 30 fs, or 30 quadrillionths of a second) and intense pulses, which exchange enough energy with the water molecules to induce the emission of electrons from them. These electrons are highly energetic and form a dense plasma with transient temperatures as high as 5000-7000 K, comparable to the surface of the Sun. These free electrons reduce the Au3+ and Ag+ ions in solution to insoluble Au or Ag atoms, which assemble to form the nanoparticles. The rate of metal-ion reduction is directly proportional to the production of electrons in the laser-induced plasma, as has been demonstrated in the case of the reduction of Au3+ in [AuCl4]- in water solution. Furthermore, the rapid cooling following the reduction caused by the solution mixing can determine the formation of novel metastable nanoparticle structures, which are not observed in chemical synthesis carried out in milder conditions.

Controlling nanoparticle size and composition
In addition to creating the reducing electron plasma, the laser radiation also forms hydroxyl radicals (OH.) by breaking apart water molecules. OH radicals react with each other to produce hydrogen peroxide (H2O2), which can act as a reducing agent for species like Au3+ (therefore further promoting the formation of Au nanoparticles), but also as an oxidising agent for reduced metal atoms, like Ag. As a consequence of the formation of H2O2, fast growth of Au nanoparticles is therefore typically observed, whereas no Ag nanoparticles form at all because the Ag atoms are quickly back-oxidised to Ag+ ions. To prevent the formation of H2O2, OH. scavengers, which include ammonia, sodium acetate and isopropyl alcohol, can be added to the solution. This enables superior control over the formation of both Au and Ag nanoparticles. For instance, Dr Tibbetts and collaborators have shown that adding isopropyl alcohol reduces the size of Au nanoparticles from 4.9 to 3.8 nm and makes them significantly more monodisperse (the same size). This has been attributed to the reduced production of H2O2 in the presence of isopropyl alcohol, which prevents the formation of large particles. For Ag, different morphologies are observed depending on the amount of ammonia added to the solution. The presence of the silicon wafer can also be exploited to reduce the rate of back-oxidation, as the laser pulses cause the photo-ejection of silicon atoms and clusters from the wafer, which can both react with the forming OH radicals and stabilise the incipient nanoparticles by attaching to them.

Challenges and opportunities of plasma synthesis
Although a general model of the physical and chemical phenomena occurring during laser ablation in liquid has been developed, based on the chemical and morphological characterisation of the synthesis products along with in situ measurements (optical emission spectroscopy, cavitation bubbles with shadowgraphy and small-angle X-ray scattering) and quantum mechanical (DFT) simulations, a number of details concerning the kinetics of the reactions induced by laser irradiation remain largely obscure. The team lead by Dr Tibbetts has been pioneering the use of in-situ UV-vis spectroscopy measurements carried out during plasma synthesis to unravel the complexity of the chemical reactions involved in the process and the dynamics of nanoparticle growth. Understanding the real-time dynamics of the species generated during laser ablation and the kinetics of the metal-ion conversion to nanoparticles, as well as establishing a correlation between the observed reaction rates and the properties of the products are important steps toward the optimisation of the synthetic conditions for generating nanoparticles with wide varieties of compositions, sizes and chemical reactivities. In particular, the ability to synthesise sub-5 nm nanoparticles composed of earth-abundant metals (Cu, Fe and Ni), in place of the noble metals Au and Ag, is an ambitious and far-reaching goal, which has the ability to transform laser ablation in liquid from a cutting-edge technique for the synthesis of metal nanoparticles into a practical, general and sustainable approach to develop new catalytic species for large (potentially industrial) scale chemical processes.

A current significant limitation of bimetallic nanoparticle catalysts is that their chemical activity deteriorates over time, owing to metal leaching and particle agglomeration. A promising approach to hinder the occurrence of these adverse processes is to support the nanoparticles on thermally stable and chemically inert oxides, such as silica (SiO2). Chemical approaches have been proposed to this aim, which use commercially available silica supports. These methods do not use surfactants, but they require a separate precursor synthesis and they are relatively slow (typically their duration is at least two days). Recently, Dr Tibbetts’s group has demonstrated that the reactive laser ablation in liquid technique can be used to promote the formation of Au nanoparticles with diameters as small as 1.9 nm supported on an amorphous silica matrix. This is the first report of laser-synthesised supported sub-3 nm metal nanoparticles, which paves the way for the development of a clean, fast and highly tunable approach for the synthesis of metal oxide nanocomposites with enhanced catalytic activity. Plasma synthesis can also be extended to the creation of catalytically active multimetallic nanostructured materials with morphologies and physico-chemical properties not accessible to other methods. The work initiated by Dr Tibbetts will provide a more detailed and insightful picture of the plasma synthesis processes in a variety of conditions and enable better control of the properties of the resulting nanomaterials.

How do you expect your method evolve in the near future, and do you expect it to see it applied to industrial or commercial processes in the short term?

<>As we learn how to manipulate the concentrations of reactive species in the plasma, we expect to gain greater control over nanoparticle sizes, compositions, oxidation states, and surface properties, as well as expand the scope of accessible metals. For instance, if we can’t remove enough hydroxyl radicals to make copper or iron nanoparticles in water, we could switch to a different solvent like methanol. Right now, our method can’t make sufficient nanoparticle quantities for commercial applications, but it is only a matter of time before a laser ablation in liquid method will achieve this. A group in Germany recently reported production of gold nanoparticles at a rate of 4 g/hr by ablating gold foil with a specialised high-repetition-rate laser.

Laser ablation in liquid: A powerful route to new nanoparticle catalysts was last modified: May 22nd, 2019 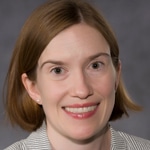 Katharine Tibbetts received her PhD in Chemistry at Princeton University with Herschel Rabitz. She was a postdoctoral fellow at the Center for Advanced Photonics Research at Temple University with Robert Levis. She began her independent career at Virginia Commonwealth University (VCU) in 2015.

Dr Tibbetts Current research areas focus on (1) synthesising metal-based nanoparticles from metal salt precursors and elucidating reaction mechanisms for these transformations in the condensed phase, and (2) probing and controlling the dissociation dynamics of polyatomic radical cations in the gas phase.