Behavioural Sciences
The comparative research of long-term trends of gender inequality largely neglects structural mechanisms. As more women reach positions of power, structural elements will become more significant. Despite the growing body of literature in this area, the long-term effect of the changing gender composition of occupations on their relative pay has been largely neglected. Hadas Mandel, an Associate Professor in the Department of Sociology and Anthropology at Tel Aviv University, has addressed this gap in the literature by exploring the negative effect of occupational feminisation on occupational pay in the US and the mechanisms underlying these trends.

The theoretical argument for understanding long-term trends of the association between feminisation and occupational pay rests on a distinction between two processes related to gender inequality, that have occurred in recent decades in the labour markets of most western democracies. The first process, which relates to women as individuals, addresses the upward occupational mobility of women, meaning that women are incrementally entering higher rungs of the occupational hierarchy. The second process – which is conceptualized as a structural process – refers to the criteria for rewarding occupations. The question in this regard is whether gender is one of the criteria and if so whether occupations are devaluated following the entry of women. The literature documenting long-term trends in gender inequality has tended to focus heavily on the former – i.e. the upward occupational mobility of women on the occupational ladder. The latter, i.e. the structural implications are largely overlooked. However, the two are inherently connected, as a notable consequence of the growing occupational attainments of women over recent decades is evident in the way occupational feminisation affects the pay level of occupations. Although a considerable amount of research has highlighted the negative association between the percentage of women in occupations and their rewards, most of these studies have focused on the causal mechanisms of the process rather than on the dynamics over an extended period of time. 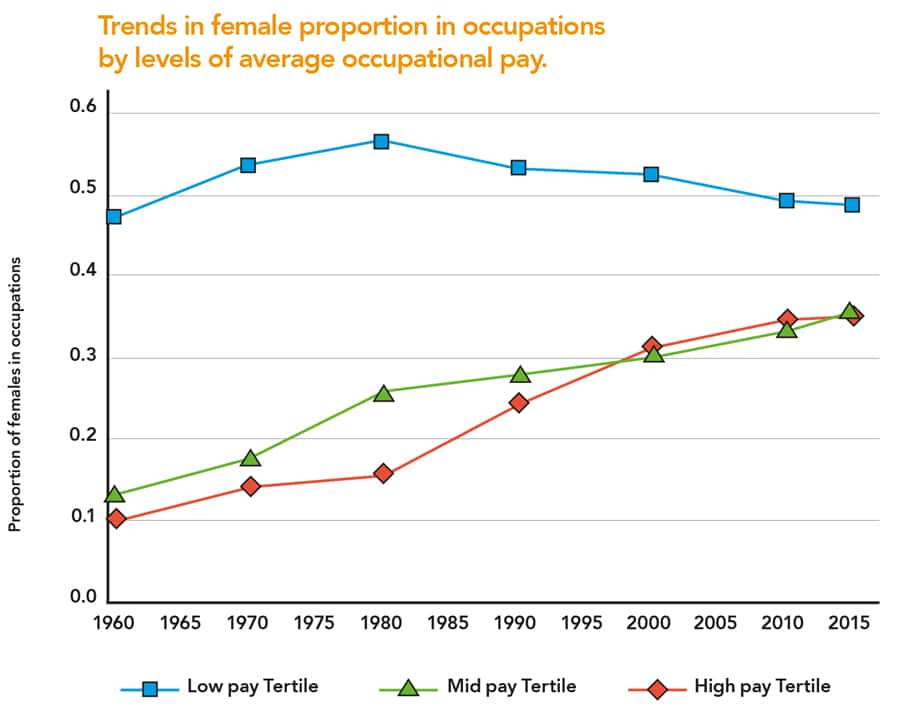 Prof Hadas Mandel sought to address this lacuna in the literature by examining trends in the effect of occupational feminisation on occupational pay over several decades in the US and exploring the mechanisms underlying these trends. Using integrated data on individuals and occupations from the US Census (1960-2010) and the ACS surveys (2001-2015), her findings show, similarly to previous studies, that in recent decades, and especially from 1980 onwards, a growing number of women in the US have approached the head of the occupational ladder (see the first figure above). This shift has been fuelled by women’s growing educational attainments, which, together with the rising economic premium to education, have greatly contributed to the decline in gender wage gaps. Furthermore, based on these changes, the negative association between female percentage in occupations and occupational pay levels declines over time (see model 1 in the second figure below). This decline is most apparent from 1980 onward, a period in which US women witnessed a significant improvement in their occupational standing, and a period where occupations requiring higher education enjoyed a large wage premium. However, when examining the effect of gender composition of the occupation after accounting for women’s higher education and for the level of education in occupations, the trend is reversed; the negative net effect of female percentage on occupational pay intensifies over time (see model 2 in the second figure below). These two opposite processes reflect the upward occupational mobility of women, on the one hand, and its gendered consequences, on the other hand.

Structural mechanisms of gender/race inequality are not directed at any specific individual and thus are more ambiguous and more difficult to track empirically.

The major role education plays in explaining the divergent trends is twofold. The entry of women into occupations requiring higher education, and the growing economic reward to high education and to occupations with higher educational requirements, may both conceal the trend in the devaluation effect as they contribute to weakening the correlation between the percentage of women and pay across occupations over the course of time. Thus, the intensification of the devaluation effect is revealed only after controlling for education (at both the occupational and individual level), because the growing educational level of women, and the growing rewards to education, are processes that run counter to devaluation and thus conceal its intensification. 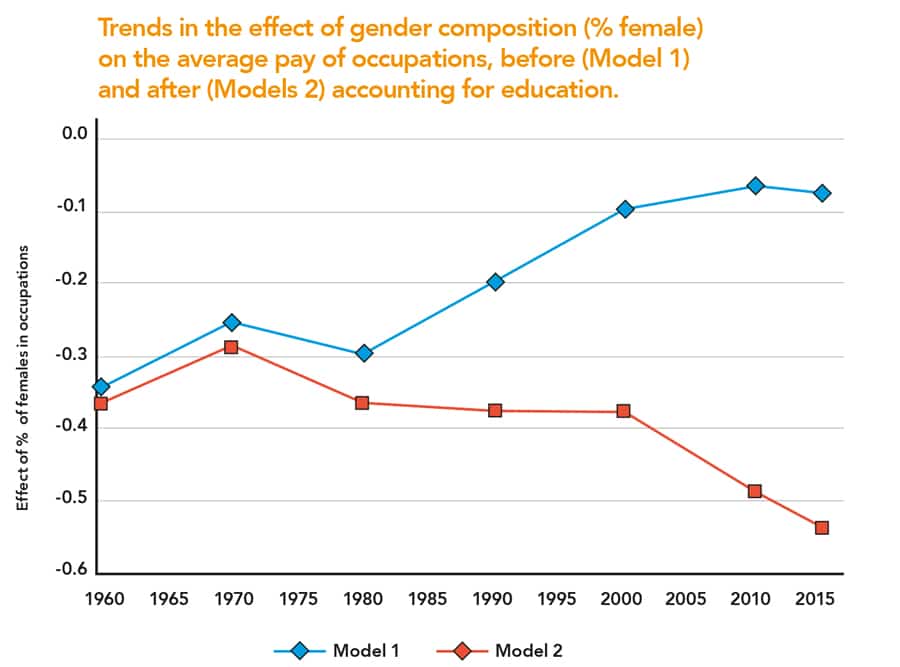 The findings demonstrate the interrelationship between two opposing gendered processes and provide concrete evidence that gender stratification operates differently at the individual and at the structural/occupational level. The split between individual and occupational forms of gender in/equality and the divergent trend of each are crucial for our understanding of gender inequality in theory as well as in practice. This is because structural mechanisms are not directed at any specific individual and thus are more ambiguous and more difficult to track empirically. The danger is therefore that the importance of gender as a determinant of economic inequality in the labour market will be less visible, less amenable to empirical assessment, and not sufficiently acknowledged.

Gender and racial pay gaps
A different topic that Prof Mandel investigates deals with the intersection between race and gender in earnings inequality. Segregation and earnings disparities between blacks and whites observed at the turn of the 21st century in the US, are considerably lower than those documented in the middle of the 20th century. The rate of decline in racial pay disparities was fairly rapid following the enactment of the Civil Rights Act but has slowed in recent decades. Despite the wide consensus that racial economic disparities are declining, researchers do not fully agree on the sources, causes, and trajectory of the decline or whether the trends are similar for both men and women. Although the literature on racial earnings disparities has grown, most studies on the topic focus on the male population. 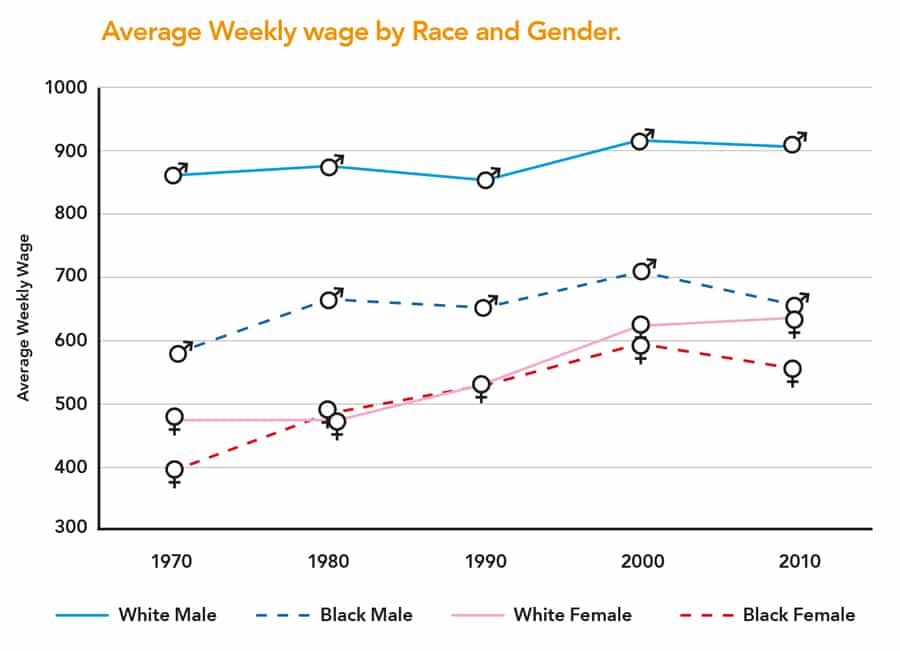 To address this issue, Prof Mandel, in collaboration with Moshe Semyonov, used IPUMS data between 1970 and 2010 to examine the trends and sources of the racial pay gap among men and women in the US labour force. Findings highlighted the significance of the intersection between gender and race. They found that gender differences in the racial pay gaps were so pronounced that it was not possible to reach conclusions regarding racial pay gaps based on data for only one of the two gender groups. Racial pay gaps were substantially larger among men than among women at all time points. Although this demonstrates the significance of the intersection of gender and race, the findings do not support a double disadvantage hypothesis. Instead, they show that black men, not black women, are the prime target of economic discrimination in the US labour market. However, the findings also show that earning inequality is more gendered than racialized. They find that women of both races have an economic disadvantage in comparison with men. The ‘racial advantage’ of black women compared with black men should thus be understood within their overall gender disadvantage.

Despite these differences between the genders, the trend over time was very similar for both genders; racial gaps sharply declined between 1970 and 1980 and continued to decline at a slower rate until 2000. However, at the turn of the millennium, the trend reversed for both gender groups. Given that earning inequality was found to be “more gendered than racialized” the similar trends is intriguing. The post-1970 decline in the gap can be understood as resulting from the enactment of the Civil Rights Act and the implementation of affirmative action policies. The reversal of the trend at the turn of the millennium may have several explanations.

One possible explanation relates the widening racial gaps to the sharp increase in overall income inequality during the 2000s. The findings showed that, in the case of men (but not women), once variations in income inequality across decades were statistically controlled, the increase in the racial pay gap during the 2000s was much smaller. This implies that in addition to changes that are directly related to race, shifts in income distribution during the first decade of the millennium were more detrimental to the earnings of blacks, particularly black men, than to those of whites.

Shifts in income distribution during the first decade of the millennium were more detrimental to the earnings of blacks, particularly black men, than to those of whites.

Some evidence also implies an increase in market discrimination against blacks at the beginning of the new millennium. During the 2000s, rewards to academic degree increased for whites more than for blacks and thus whites benefited more from higher education relative to blacks. This was followed by stagnation in the processes of occupational desegregation, which may also indirectly indicate a rise in economic discrimination against blacks. Although different pay rewards of higher education for blacks and whites, as well as stagnation in desegregation, are only implicit indicators for discrimination, the simultaneous changes in the two trends – i.e., the reversal of the trend among the two gender groups, coupled with our knowledge of government reforms during this very period– may point to growing discrimination.

What is the focus of your future research in this area?

<>I expect the dynamic of the structural vs. individual processes to vary between countries and also by class. I thus seek to examine the processes in four representative countries – Sweden, Germany, Spain and the United States – that differ in many of the institutional aspects that affect gender inequality, including the provision of welfare, gender ideology, wage structure, and political economy factors. Therefore, gender in/equality processes in these countries are expected to take different forms in both structural and individual appearances. That said, in all countries I expect gender in/equality processes to vary by class, and I thus seek to examine the processes after distinguishing between classes of workers. I expect gender equality to be more pronounced and rapid for advantaged women. At the structural level, however, the rapid upward occupational mobility of skilled and educated women may expose highly rewarded occupations to devaluation and pay reduction more than others. 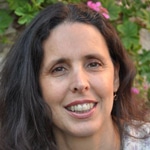 Hadas Mandel is an Associate Professor in the Department of Sociology and Anthropology at Tel Aviv University. Her research focuses on the intersection between gender, class, race and the complex implications of welfare state policies on women’s economic attainments. Since 2017, she is the Principal Investigator of the ERC-funded ‘Structural vs. Individual’ project addressing the analytical and methodological distinction between structural and individual aspects of gender inequality underpinning the development of gender inequality over time and across societies.

One thought on “Gender inequality: occupational devaluation and pay gaps”