Health & Medicine
Dr Sanjay Gupta from Case Western Reserve University is exploring the chemopreventative properties of phytochemicals such as polyphenols and flavonoids, found in plants. The team aim to enhance our understanding of the epigenetic mechanisms that are influenced by phytochemicals resulting in cancer prevention. By manipulating gene expression, without changing the genetic code, phytochemicals can inhibit both oxidative stress and the effects of cancer-inducing proteins. Using dietary agents could be a cost-effective, non-toxic therapeutic tool to prevent cancer and improve the quality of life of patients.

Cancer is a leading cause of death worldwide and is responsible for one in six mortalities. Furthermore, around 70% of cancer deaths in 2008 occurred in developing countries. Cancer treatments are extremely expensive and the effectiveness of these drugs is limited. Consequently, many people cannot afford treatment, especially patients from low-income countries, resulting in suffering and increased mortality. However, around 30% of all cancer deaths could be prevented by a change in lifestyle and diet.

It is well known that phytochemicals, derived from plants eaten as part of our diet, are powerful bioactive compounds and have an important role in antioxidation and cancer chemoprevention. This inspired Dr Gupta and his team to conduct extensive research that explores natural cancer prevention using dietary agents. In particular, Dr Gupta is focussed on the role of phytochemicals as epigenetic modifiers in cancer.

What is epigenetics?
Epigenetics is the study of chemical changes to the genome that are heritable, reversible and affect gene expression without alteration of the genetic code itself. One essential epigenetic mechanism is DNA methylation. This is where methyl groups are added to the DNA molecule, most commonly at the 5-carbon of the cytosine ring. The addition of the methyl group inhibits a process known as transcription, resulting in reduced gene expression. The removal of these methyl groups, or ‘DNA demethylation’, can therefore enhance gene expression. Another important epigenetic mechanism is histone modification. Histones are proteins which have a role in DNA packaging. DNA wraps itself around eight histone proteins to form chromosomes. Modification of histones by processes such as acetylation can affect gene expression. Addition of acetyl groups to the histone proteins decreases the strength of the interaction of the histone protein with the DNA resulting in a more relaxed chromatin structure. This is associated with increased levels of gene transcription. Conversely, the removal of acetyl groups from the histone protein (deacetylation) results in reduced levels of gene expression. By investigating the impacts of phytochemicals on epigenetics, Dr Gupta aims to use cost-effective, minimally toxic dietary agents as a cancer preventative or to improve the quality of life of suffering patients.

GTP has the potential to alter both DNA methylation and chromatin remodelling – two essential epigenetic mechanisms.

Green Tea Polyphenols
In a recent study, Dr Gupta and his colleagues showed that polyphenols, found in green tea, can be used to delay breast cancer progression and invasion. The molecular pathway regulating tumour development is extremely complex. One of the earliest steps in the pathway is extracellular matrix (ECM) remodelling. The ECM is a network of macromolecules such as glycoproteins and enzymes that provide support to the surrounding cells. In tumour progression, matrix metalloproteinases (MMPs) degrade parts of the ECM, generating matrikines. These are active molecules that enhance tumour progression and tumour cell invasion. MMP activity is regulated by ‘tissue inhibitors of matrix metalloproteinases’ (TIMPs). These are natural inhibitors of MMPs and it has been hypothesised that upregulation of TIMPs in cancer cells could inhibit invasion and metastasis. Interestingly, studies have shown that green tea polyphenols (GTPs) such as epigallocatechin-3-gallate (EGCG) suppress the activity of MMPs in breast and prostate cancer lines. Dr Gupta and his team decided to explore this further by investigating the effect of EGCG on TIMP regulation and the potential epigenetic mechanisms underpinning this interaction. The team treated two different lines of breast and prostate cancer cells with EGCG for 72 hours and found that TIMP-3 mRNA and protein levels increased significantly. Additional investigation revealed that this was due to epigenetic regulation. EGCG treatment increases histone protein acetylation, resulting in increased levels of TIMP. Furthermore, the team discovered increased H3K27 trimethylation at the TIMP-3 promoter site, which enhanced gene expression.

Chemoprevention of prostate cancer
Prostate cancer is the second leading cause of cancer-associated mortality and is the most common cancer in men. In the UK, 129 men are diagnosed with prostate cancer every day. Clearly, there is an urgent need to develop novel therapies to combat prostate cancer. Dr Gupta and his colleagues explored the molecular pathway underpinning prostate cancer and investigated the epigenetic impacts of GTP exposure. Epigenetic silencing of gluthathione-S-transferase pi (GSTP1) is a key feature of prostate cancer. GSTP1 is an enzyme that has an important role in detoxification of potent compounds such as carcinogens. In prostate cancer, GSTP1 gene expression is repressed due to the epigenetic mechanism of DNA methylation at the promoter site. The team performed a study in which human prostate cancer cells were exposed to GTP for 1–7 days. Results revealed that GSTP1 was re-expressed and DNA methyltransferase (the enzyme responsible for DNA methylation) was inhibited, reducing the inhibiting effects of DNA methylation at the GSTP1 promoter site. Furthermore, chromatin immunoprecipitation assays revealed that prostate cancer cells treated with GTP have remodelled chromatin, resulting in increased transcriptional activation of the GSTP1 gene, leading to increased gene expression. Overall, these ground-breaking results show that GTP has the potential to alter both DNA methylation and chromatin remodelling – two essential epigenetic mechanisms, highlighting the value of GTP as a chemopreventative tool for prostate cancer.

Antioxidant properties of apigenin
Apigenin is a flavone subclass of flavonoid, found in many herbs, fruits and vegetables such as parsley, onions, oranges and chamomile and is an essential component of our diet. Studies have shown that apigenin possesses a variety of beneficial properties such as tumour growth inhibition and antioxidant activity. Dr Gupta and his team aimed to research the effect of apigenin on prostate cancer cells. Human prostate cancer is extremely vulnerable to oxidative stress in which free radicals react with proteins and DNA, often causing extensive damage. DNA mutations caused by oxidative stress can result in malignant changes, enhancing the risk of prostate cancer development. The team performed an in-depth study, exploring the cellular uptake of apigenin in prostate cancer cells. Results revealed, for the first time, that apigenin accumulates in the nuclear matrix and binds to DNA, reducing DNA damage via oxidative stress. Interestingly, apigenin preferentially accumulates in cells which have androgen receptors. Apigenin binds to androgen receptors and inhibits its expression in prostate cancer cells. Dr Gupta suggests that apigenin could possess androgen receptor inhibition properties, interfering with androgen signalling, reducing oxidative stress. However, more research is needed to clarify this hypothesis.

Apigenin accumulates in the nuclear matrix and binds to DNA, reducing DNA damage via oxidative stress.

Future research
Dr Gupta’s ground-breaking research has shown the value of dietary phytochemicals as cancer preventative agents. The role of phytochemicals as epigenetic modifiers has been supported by the studies of Dr Gupta and his team.However, our knowledge about the exact molecular mechanisms underpinning epigenetic alterations is still limited. Furthermore, more clinical research must be performed. For example, an important next step is determining the most effective dose of phytochemicals required for optimal beneficial effects in humans. Overall, these cost-effective, low toxic dietary agents have the potential to be used as preventatives for people at risk of developing cancer or as treatments to improve the quality of life of those suffering.

Where do you see your research focus in five years’ time?
In the next five years, our plan is to move our research from the bench to the clinic in testing the promising agents through clinical trials. 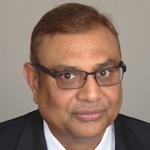 Dr Gupta was awarded his PhD by Avadh University in 1992 and his research was conducted at the Industrial Toxicology Research Center and King George’s Medical College, Lucknow, India. He completed his postdoctoral fellowship in the Department of Dermatology at Case Western Reserve University.

Dr Gupta’s mission is to identify and develop cost-effective, minimally toxic bioactive agents as cancer preventative agents for long-term use and as adjuvants in various therapies with a focus on epigenetic research.

One thought on “Plant phytochemicals. A new cancer chemopreventative?”