Health & Medicine
The cause of death in sudden infant death syndrome (SIDS) is unknown. Scientists know that risk factors include the prone sleeping position, prematurity, low birth weight, and non-lethal infections. SIDS likely has a respiratory origin, but the diaphragm that powers the vital respiratory pump has not been adequately investigated in the context of SIDS. Diaphragm failure is a well-known cause of death in adults, and SIDS-Critical Diaphragm Failure (SIDS-CDF) hypothesis posits that the diaphragm plays a central role in SIDS. Pontus Siren investigates the diaphragm in the context of SIDS.

Sudden infant death syndrome (SIDS) is defined as the sudden and unexpected death of a seemingly healthy infant. By definition, SIDS is a diagnosis of exclusion, and despite five decades of intense research efforts, the cause of death is unknown. In developed countries, SIDS remains a leading cause of death for infants 6 months and younger.

SIDS is prominently associated with sleep, premature and low-birth-weight infants, the male gender (60% of cases), non-lethal infections, and the prone sleeping position, but several other risk factors such as cigarette smoke and hyperthermia are also associated with the syndrome. SIDS has a bell-shaped mortality curve with peak incidence in infants aged between 2 to 4 months and is rare in infants older than 6 months.

It is generally accepted that sudden death is not caused by trauma or airway occlusion and that the syndrome is due to either respiratory or circulatory failure. Clinical observations, heart rate, and respiratory recordings of infants who subsequently succumb to SIDS strongly suggest a respiratory pathway for the syndrome.

The investigation of the respiratory origins of SIDS has focused on the lungs and over the past two decades on the central nervous system (CNS). In total, over 1,600 articles have been published on these two topics. However, the diaphragm that powers the vital respiratory pump has not been adequately investigated in the context of SIDS with only 59 PubMed articles published in the past 50 years.

The respiratory muscles are as vital as the heart and they can and do fail. In adults, diaphragm failure is a terminal event and a common cause of respiratory failure. Given that SIDS likely has a respiratory origin, Mr Pontus Siren – an independent researcher based in Switzerland – argues that the diaphragm’s possible role in SIDS should be investigated since existing research offers no compelling reasons to exclude it.

The respiratory muscles (RM) are as vital as the heart and they can and do fail. RM failure is a well known terminal event in adults.

Mr Siren has written about the diaphragm and SIDS since 2010 and advanced the SIDS-Critical Diaphragm Failure (SIDS-CDF) hypothesis to explain the link between SIDS and the diaphragm. The hypothesis posits that the diaphragm is a vital organ that must continuously generate adequate force to maintain ventilation, and that CDF is a terminal event and the cause of death in SIDS. The hypothesis argues that all SIDS risk factors either increase the workload of the diaphragm or reduce its force generating capacity, and that while SIDS has many contributing factors, it has one cause, namely the failure of the vital respiratory pump.

The role of the prone sleeping position and non-lethal infections in SIDS
Research has identified many risk factors for SIDS, but the prone sleeping position and non-lethal infections are especially important. Indeed, a strong correlation and seasonal pattern between SIDS cases and deaths due to respiratory infections has been reported in infants (Figure 1). Similarly, following the “safe sleep” campaigns around the world to encourage infants to sleep on their backs, SIDS deaths decreased between 40% and 80%.

The one pathological finding that characterises over 70% of SIDS cases is intrathoracic petechiae, the incidence of small red or purple spots caused by bleeding into the intrathoracic tissue. Research shows that an infection together with gasping or a “struggle to breathe” episode is required for the formation of characteristic intrathoracic petechial haemorrhages. The clinical signs of respiratory muscle fatigue are rapid shallow breathing, paradoxic chest wall movements, and respiratory pauses combined with hyperventilation.

Currently there is no commonly accepted mechanism to explain why the prone sleeping position is such an important risk factor in SIDS. Mr Siren points out that the prone sleeping position significantly increases the workload of the infant diaphragm compared to the supine position. He argues that the relationship between the prone position, increased diaphragm workload and SIDS should be investigated further.

Other risk factors for SIDS and the diaphragm
In addition to non-lethal infections and prone sleeping position, there are several other SIDS risk factors that suggest that the diaphragm may play a key role in the syndrome.

Mr Siren points out that SIDS is significantly associated with REM sleep. During REM sleep, the auxiliary respiratory muscles (the internal and external intercostals) become largely or totally inactive. This inactivation can have a significant effect on respiratory function since these muscles are critical for ventilation in the infant with a pliable chest wall and usually support a fatigued diaphragm.

Research shows that SIDS victims experience one or more hypoxic events over several hours to days before death that is characterised by decreased systemic oxygen levels. Mr Siren notes that hypoxia is known to significantly decrease muscle function in both humans and animals and impairs the diaphragm’s ability to generate force. Given the above, he argues that the possible link between hypoxia and the diaphragm should be investigated.

The diaphragm is the most important muscle in the human body after the heart, and in pre-term infants is only as thick as 10–17 sheets of paper.

Mr Siren highlights that hyperthermia, or overheating, is also associated with SIDS even though a causal mechanism has not been established. He postulates that since it is well known that hyperthermia increases the respiratory workload, it could be a contributing factor to diaphragm fatigue and, in conjunction with other risk factors, lead to critical diaphragm failure.

Finally, studies carried out both in animals and humans have explored how cigarette smoke contributes to SIDS. The findings conclude that cigarette smoke can affect the energy metabolism of the diaphragm, leading to reduced force generating capacity.

The missing link?
By definition, SIDS is a diagnosis of exclusion where no cause of death can be established. Of the critical cardiorespiratory organs, the possible role of the heart, lungs, and central nervous system in SIDS has been extensively investigated. These investigations have not produced a satisfactory explanation of the origins of the syndrome. However, there is a broad consensus that SIDS likely has a respiratory origin. Mr Siren has repeatedly argued that the diaphragm, which powers the critical respiratory pump, remains an serious blind spot in SIDS research.

Mr Siren suggests that more research is needed to explore the potential role of the diaphragm in SIDS. He highlights the imperative to investigate the link between respiratory muscle function and SIDS, and proposes that scientists leverage research on the adult diaphragm and its dysfunctions in the context of SIDS.

Mr Siren hopes that by highlighting the possible role of the diaphragm in SIDS, researchers will start investigating the missing link in SIDS and progress towards understanding the underlying mechanism of the syndrome.

How do you think scientists could be encouraged and supported to undertake more research projects looking at the role of the diaphragm in SIDS?

<>
SIDS has been intensively investigated for over five decades, but the cause of death has not been identified. Besides the diaphragm, all other critical cardiorespiratory organs have been comprehensively investigated in the context of SIDS. The diaphragm has been extensively studied in other vulnerable patient populations and this large body of evidence should be leveraged in SIDS research. The respiratory pump is as vital as the heart, and it remains a collective blind spot in SIDS research. 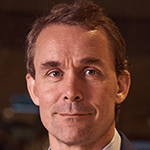 Pontus Siren is an independent researcher based in Switzerland.

Pontus Siren highlights the fact that the diaphragm has not been adequately investigated in the context of sudden infant death syndrome (SIDS) and that it may be the missing link in the syndrome.