Earth & Environment
Active volcanism is prevalent across much of the Earth’s surface, yet the deep mantle and crustal processes that drive it are still being understood by geologists. Untangling the complex chemical relationships that arise from magma differentiation offer some clues as to the relationships between melting of mantle rock and crystallisation of molten magma to igneous rocks. Professor Vander Auwera at the University of Liège uses geochemistry to study these complex processes at the subduction zone that forms the long Andean Arc in South America.

Volcanoes and earthquakes are the most obvious sign that the Earth is a dynamic, geologically active planet. They are a visible representation of plate tectonics: the slow movement of the Earth’s outermost, brittle layer. The exact mechanism for how and why these plates move is still hotly debated by geologists. There are around 1,500 active volcanoes on Earth. Many of these are situated along plate boundaries amongst large populations of people. Understanding the hazards that surround volcanoes is important for communities who live under their shadow, highlighting the importance of volcano research by geologists and volcanologists.

To understand what types of eruption to expect and the risks that volcanism poses, geologists research must answer many questions. What type of plate boundary is the volcano formed on? What kind of magma chemistry fuels the volcano? What are the subsurface structures around the volcano? Geologists like Professor Jacqueline Vander Auwera study previous eruptions and magmatic material to discover answers to some of these questions. She is a geochemist at the University of Liège, Belgium, and completes in-depth chemical analyses of igneous rock samples from volcanic eruptions in order to understand the geochemical processes within the magma prior to its eruption.

What are Plate Tectonics?
The Earth is divided into layers, which differ in both physical and chemical properties. The outermost layer of Earth is wrapped in tectonic plates. These make up the brittle ground surface above the ocean (continental crust) and the thinner ocean floor (oceanic crust), and both rest on the uppermost section of the Earth’s mantle. Geologists refer to the brittle crust and mantle layer beneath as a single unit called the lithosphere. Beneath the lithosphere lies the asthenosphere, where the mantle rock is almost at melting point. This layer is weak and can deform over long periods of time. The lithosphere moves slowly over the top of the thin asthenosphere layer, moving the tectonic plates across Earth’s surface. But what might be driving this movement and how does this generate volcanoes?

Whilst the Earth can be split into layers based on its physical properties, such as brittle or soft plastic layers, it can also be divided based on its chemistry. And differences in chemistry are dependent on what type of rock is present. Geologists categorise igneous rocks by the minerals they can identify within them. The minerals that form depend on the chemistry of the magma (molten mantle rock) that igneous rocks form from. Oceanic crust is thin, only about 7km thick, and is made of a dark, dense igneous rock called basalt. The continental crust has a significantly different chemistry to oceanic crust. It is much thicker, reaching up to around 70km depth, and has a more complex chemistry with an overall granitic composition in its uppermost layer that has a lower density than basalt.

The types of boundaries between tectonic plates help to describe how the different types of crust move in relation to each other across Earth’s surface. At convergent boundaries, two tectonic plates push against each other. The denser plate will begin to subduct or sink into the mantle below. Where an oceanic plate meets a continental plate, the denser oceanic plate will sink below the continental plate, creating a subduction zone. 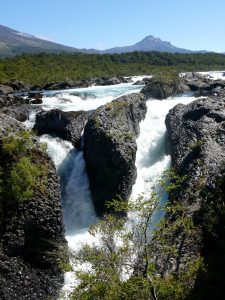 The Andean Arc is so long that geologists split it into four key areas, and Professor Vander Auwera’s work is focused on the Southern Volcanic Zone in Chile. Here the Nazca oceanic plate is subducting beneath the South American continent, and stratovolcanoes such as La Picada are located along the continent’s western margin. Stratovolcanoes are steep, conical-shaped volcanoes built up from many layers of repeated eruptions.

The magmas that are generated from melting of the mantle will rise up through the continental crust above. As pressure and temperature increase for the subducting crust, the minerals that contain water (hydrous minerals) are destabilised, and release fluids. Between the subducting Nazca plate and the overriding South American continental plate, there is a ‘mantle wedge’, and these fluids allow the mantle wedge rock to melt at a slightly lower temperature. It generates molten magma through a process known as partial melting, and as the molten magma is less dense than the surrounding mantle, it rises through the continental crust. The magma will start to solidify the higher it rises through the cooler continental crust, but can form chambers of molten magma which are the source of erupted lavas.

The Complexities of Igneous Petrology
Professor Vander Auwera and her colleagues study the formation and crystallisation of these magmas, a branch of geology known as igneous petrology. Igneous rocks are formed from the crystallisation of magmas, which are often very chemically complex. They are made of a variety of major elements, which form particular mineral structures, such as the magnesium and iron-rich magmas that form basalt rock.

The team calculated that the majority of mineral crystallisation occurred at about 7-11 kilometres depth in the crust.

The partial melting process that generates molten magma and the crystallisation process during cooling cause further complexities in igneous rock chemistry. Deep mantle rock is only melted in small amounts, with some rock remaining solid (partial melting). The melt can be quite different in composition to its parent rock type because the elements are variably split between the solid and liquid. When this melt rises into the cooler crust, it will progressively solidify by crystallising a series of minerals. Sometimes, a mineral that crystallised (becomes solid) at higher temperature can later react with the leftover melt and form a completely new mineral. The challenge for geochemists is to untangle these complex chemical relationships between the minerals, their parent magmas and the original mantle rock to determine how igneous rocks crystallise.

La Picada Magma Chemistry
The team collected samples from La Picada, which is an extinct stratovolcano with a similar geochemistry to the active volcano Osorno that sits partly above it. The two volcanoes are likely to share ‘plumbing systems’, the interconnected chambers and channels along which magma moves. They collected 47 samples from the different volcanic units that formed La Picada during its active period. To analyse the igneous petrology of these samples, Professor Vander Auwera and her colleagues completed a suite of tests. They made thin slices of the rocks and studied these under a microscope to identify all the minerals present and the texture of the rock (how much is formed of larger, well-developed crystals compared to the microcrystalline groundmass). They also ground up the rock samples and identified how old they were (when the eruption occurred) and measured their composition of major and trace elements. They studied the element compositions of the crystals to calculate the pressure at which they formed, which represents the depth of formation in the crust.

The lava samples ranged from basaltic samples through to dacites, which are more like a granite in mineral composition. The team calculated that the majority of mineral crystallisation occurred at about 7-11 kilometres depth in the crust, the main magma storage region. Interestingly, when the magmas crystallised here, they hardened so much that much of the magma began behaving as a solid and could no longer be erupted. However, the remaining melt liquid could escape from this crystalline mush to produce even more evolved lavas. The basalts that were collected were enriched in mineral components that were drawn down with the subducting slab, and were also enriched in water molecules, suggesting the initial mantle was melted in relatively wet conditions. The team also confirmed that the magma ascended rapidly, aided by the presence of large fault systems within the continental crust.

Magma differentiation is incredibly complex, and no single volcanic system is completely identical to another. The underground ‘plumbing’, the melting processes within the mantle and the type of plate boundary that forms the volcano all have complex controls on its development as well as the frequency and type of eruption. By studying these past volcanic events and the igneous petrology of magmatic materials, geologists can begin to understand the processes that are currently ongoing deep in the crust and aid predictions about how volcanoes may behave in the future.

What first sparked your interest in igneous petrology and the complex geochemistry of magmas?

<> I was curious to understand how the magmas are initially formed and how the process of solidification can produce the large variety of igneous rocks we can observe at the Earth’s surface. Also, the theory of plate tectonics, that was accepted in the seventies by most geologists as the new paradigm of the Earth Sciences, provides an exciting unifying model for explaining the origin of igneous rocks. Volcanism is an active process that we can observe happening today, something rare for geologists who usually analyse the remnants of past processes to decipher their origin. 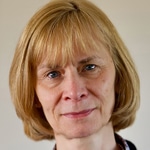 Jacqueline Vander Auwera’s research is focused on magmatic rocks, from the production of the magmas at their source region to their crystallisation and final emplacement.