Rice is a staple food for much of the world’s population, but it is also highly prone to absorbing environmental arsenic compared to other cereal crops. Biochar from microwave-assisted pyrolysis – microwave heating under low oxygen conditions – has been shown to remove contaminants from soil. Microwave soil heating also increases crop growth. Dr Graham Brodie, Governor of the International Microwave Power Institute, and his team have successfully reduced the arsenic concentration of rice grains using both microwave soil heating and biochar incorporation. This technology also improves soil fertility and can be applied to other important environmental contaminants.

High concentrations of arsenic are toxic to humans, and the most common entry point is the consumption of foods containing arsenic. Rice is especially prone to accumulating arsenic (which is naturally present in soil) and water compared to other cereal crops. In contrast to wheat and barley, rice has been shown to absorb at least ten times more arsenic from contaminated soil. Industrial processes, such as mining, manufacturing, fertiliser synthesis, and pesticide applications are raising the soil arsenic concentrations of this already abundant contaminant. Although arsenic itself is ubiquitous in the environment, deposited by the weathering of arsenic-containing rocks and mineral deposits, its contamination of the food supply has become a global concern.

Rice is a staple food source for half the world’s population, but it is also grown on some of the most contaminated soils. This is in part because rice is a heavily irrigated crop, requiring more water than other cereal crops, and is therefore more exposed to long-term arsenic build-up in the field. The high levels of contamination are a major public health concern for a population which eats an estimated 250–650g per person per day.

Removing the contamination
There are many established methods to remove arsenic from both water and soil. However, they are often cumbersome, expensive, impractical, and not always effective. Some older methods to remove arsenic from water include precipitation, filtration, and reverse osmosis. Available techniques to remove it from soil include flushing, acid extraction, or electrokinetic treatment. Many of these rely on capturing and disposing of arsenic, which introduces its own challenges in terms of disposal of the trapped contaminants. Releasing it back into the environment would increase the arsenic concentration of whatever land is used as a dumping area.

In place of a filtration or capture mechanism, Dr Graham Brodie and his team have developed an innovative new method for removing arsenic from soils using a combination of microwave treatments.

By heating plastic and organic waste materials with a controlled dose of microwave radiation in an oxygen-free environment, the scientists were able to generate biochar, bio-oil (a hydrocarbon-rich liquid) and syngas (somewhat like natural gas). Specifically, the processing of the plastic and organic waste involves irradiating the waste with microwave radiation, thereby increasing its temperature up to 700ºC under low oxygen conditions, in a process known as pyrolysis.

Brodie’s team have also been experimenting with the microwave heating of soils for pathogen and weed control since 2007. They noticed that plants grew better in the treated soils, often producing yields which are 35% or more higher than those of crops grown in untreated soil.

Rice is a staple food source for half the world’s population, but it is also grown on some of the most contaminated soils.

The combination of microwave soil heating and the incorporation of biochar produced from the microwave pyrolysis process resulted in a reduction in arsenic levels and increased bioavailability of beneficial soil nutrients for better crop growth and yield.

To further optimise microwave soil heating treatment with regard to arsenic reduction, researchers tested two levels of microwave radiation, as well as an untreated control sample. Clay-type soil samples, optimal for growing rice, were mixed with additional arsenic at levels of 20, 40, 60, and 80mg per kg of dry soil, as well as an untreated control. Microwave radiation treatments were tested at three- and six-minute durations.

Successful arsenic reduction
With increasing soil arsenic levels, the grain yield and overall growth of the rice plant decreased. Importantly, excess arsenic is toxic to plants as well as humans. It interferes with plant metabolic processes and reduces chlorophyll content, which decreases growth and grain development. When plants were grown on the experimental soils, the microwave treated soil samples facilitated a significant increase in plant size and yield, diluting the effect and concentration of the added arsenic in the rice plants. The highest dose of radiation for the longest duration had the greatest effect, though the mechanism behind this reduction is unclear.

The research also showed that the incorporation of a moderate amount of microwave-generated biochar further enhanced this increase in plant size and crop yield; however, doubling the amount of biochar in the soil reversed this beneficial effect. Therefore, there is an optimal amount of biochar for reducing the toxic effects and accumulation of arsenic in rice crops.

Another theory suggests that microwave treatment increases the bioavailability and absorption of important nutrients in the soil. This type of heat treatment has been shown to increase soil organic matter, which would act as a natural compost filled with essential macronutrients. These include nitrogen, phosphorous, and sulphur, among others. Nitrogen is particularly important for producing plant biomass and phosphorous is necessary for proper seed development. Microwave radiation has been shown to mineralise the nitrogen present in the soil, thereby making it more available to the plant; this increase in nitrogen content would be analogous to applying a nitrogen fertiliser. In addition to its effect on soil minerals, microwave soil heating has also been shown to disintegrate microbial cells. The breakdown of this living biomass could add intracellular and extracellular macromolecules to the soil, but the exact impact of microwave treatments on soil microbes is not fully understood.

A further possible mechanism for the success of microwave treatments could be the direct reduction of arsenic absorption by the plant. The microwave breakdown and mobilisation of critical macronutrients creates compounds which compete with arsenic for absorption by the plant. Specifically, phosphate – a version of phosphorous with greater bioavailability – and silicone have a similar plant uptake mechanism to arsenic. Both are made more abundant in soils treated by microwave radiation, thereby affecting how arsenic interacts with the soil particles and the entry points into the plant.

Biochar and arsenic adsorption
The researchers were also interested in testing the capacity of microwave-generated biochar in removing or immobilising arsenic in soil. Char is a solid matter produced by the low-oxygen thermotreatment of plastics and biomass. Its porous nature makes it efficient at adsorbing pollutants in the soil, or holding the particles on its surface. In contrast to absorption, which is the incorporation of particles within the material, adsorption is a surface-level interaction. The porosity gives biochar a large surface area to bond many arsenic particles as well as other soil contaminants. However, its ability to bind arsenic can depend on many factors, such as soil texture and type of biochar.

Sawdust biochar was tested at concentrations of ten and 20 tonnes per hectare. Researchers observed a significant increase in plant growth and grain yield for rice grown on ten tonnes per hectare of biochar, but this decreased with the 20 tonnes per hectare treatment, regardless of microwave treatment or arsenic concentration. This was thought to be a result of the complex interaction of biochar and soil minerals. One of the effects of adding biochar is an increased concentration of molecules which compete with arsenic for entry into the plant, as seen with the competition between arsenic, phosphate, and silicone discussed above. However, biochar has also been shown to react with arsenic and can immobilise it within the soil.

Further applications
In addition to mitigating arsenic levels in the food supply, microwave radiation treatments are known to be effective against other forms of soil contamination, such as inorganic pollutants, organic waste, and heavy metals. Brodie’s team is also studying the effects of microwave radiation treatment on plastic and biological waste. The decomposition of these materials during pyrolysis duplicates the conditions within the earth which converted organic matter into coal, oil, and gas millions of years ago. The application of these same conditions converted the plastic and other contaminants to oil, gas, and char within minutes.

These initial findings show how microwave pyrolysis is a promising approach toward purifying our contaminated soils and increasing their fertility. More work must now be undertaken when it comes to the large-scale application of these processes. With more practical field testing, the technology could offer a cheaper and simpler alternative to the current methods of arsenic reduction, ensuring a healthier global food supply.

Has there been any experimentation as to the effect of the microwave irradiation treatment on the soil microbiome or symbiotic fungi which are beneficial for plant growth?
Our team have explored some of the impacts of microwave soil heating on soil biota. Experiments demonstrate that the heating process kills several pathogenic fungi, which cause serious diseases in plants, and changes the species composition of the bacteria and other fungi in the soil. Microwave heating does not sterilise the soil; however, as some species are killed by the heat others increase in number to fill the ecological niches that are vacated. So far, the experiments show that beneficial bacteria, such as those that are responsible for fixing nitrogen in the soil for plant use, benefit from these changes in the soil. Further research is underway to better understand this. 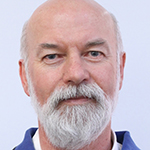 Graham Brodie is Governor of the International Microwave Power Institute, who has explored applications of microwave energy for plasma surface sterilisation; heating of biomaterials and soils; pyrolysis of plastic and bio-wastes; and microwave holography for sensing objects in soil and built environments.

Dr Graham Brodie researches microwave heating of soil and the application of microwave-generated biochar as a means of reducing arsenic absorption.

This work was unfunded; however, the research associated with the microwave weed management and soil heating projects was funded by both the Grains Research and Development Corporation and AgriFutures.