Earth & Environment
Forage crops like alfalfa (Medicago sativa L.) comprise a fundamental component of the agricultural industry. The consumption of forage species by livestock is far from energy-efficient, resulting in implications for livestock health and the health of the environment through the release of greenhouse gases. Additionally, the prevalent force of climate change challenges crop resilience and sustainability. Research scientist Dr Stacy Singer of Agriculture and Agri-Food Canada (AAFC) aims to reduce the environmental impact of agriculture and produce more resilient crops by using innovative biotechnological techniques, including genome editing.

The forage crop alfalfa is the fourth most cultivated crop in the United States superseded by corn, soybean, and wheat. It is one of the most widely grown leguminous forage species due to positive qualities including high biomass yield, protein content, palatability, adaptability to varying growing conditions, and its nitrogen-fixing ability. Despite these qualities, like some other crop species, breakdown of alfalfa and conversion to livestock protein (in the form of meat and milk) is not optimal. This is due to forage proteins being readily digested during rumen fermentation, compared to slower and poor digestion of plant cell wall components (cellulose and hemicellulose).

This asynchrony causes a high loss of nitrogen which is transferred into the surrounding environment through excretion. Not only do producers of crops like alfalfa lose out on profits, but the environment can take a heavy hit. Nitrogen passed through animal waste can leach into the groundwater as nitrates and cause water pollution. Nitrogen can also act as a substrate for nitrous oxide formation, a formidable greenhouse gas. Inefficient rumen fermentation can also lead to the emission of large quantities of methane. This is a powerful greenhouse gas that is said to cause an environmental impact 25 times greater than carbon dioxide.

These challenges warrant the need for more sustainable agricultural practices. To mitigate the negative effects associated with forage crop cultivation, researchers like Dr Stacy Singer are turning to biotechnology for answers. Some of the ways in which livestock performance can be improved and environmental impact reduced include:

Increasing lipid content
Lipids are structural components of cell membranes which act as a permeable barrier to the cells’ external environment. Plant lipids play an important role in cellular signalling and energy storage compounds. Research has shown that lipids have higher calorific content than other energy sources like carbohydrates and proteins. With this knowledge, scientists have proposed increasing lipid levels in livestock feed to increase calorific content and mitigate greenhouse gas emissions including methane. This is because intake decreases with increased lipid supplementation.

It has been estimated that increasing leaf lipid content to between 7 and 8% dry weight (DW) would yield a 10% increase in energy without damaging rumen function or compromising protein end products. Enhancing the lipid content of livestock feed may be a viable and cost-effective solution for the environment and crop producers, respectively. Furthermore, increasing forage oil content may also be of added benefit, providing a reduced risk of bloating while maintaining efficient energy conversion and reducing nitrogenous waste. As there is little variability in the leaf lipid content trait, traditional plant breeding is not a suitable avenue for experimenting to encourage higher forage lipid levels. This is where molecular breeding takes centre stage.

Dr Singer, along with Dr Surya Acharya from the Lethbridge Research and Development Centre at AAFC, are attempting to use genome editing to increase lipid levels in alfalfa. In a preliminary study with Dr Champa Wijekoon at AAFC in Winnipeg, they used a molecular technique known as virus-induced gene silencing (VIGS) in a close relative of alfalfa (Medicago truncatula) to down-regulate genes involved in the reduction of lipid content in crop species. In Arabidopsis thaliana, genes SUGAR-DEPENDANT 1 (SDP1), ADP-GLUCOSE-PYROPHOSPHORYLASE SMALL SUBUNIT 1 (APS1), TRIGALACTOSYLDIACYLGLYCEROL 5 (TGD5), and PEROXISOMAL ABC TRANSPORTER 1 (PXA1) were found to increase leaf lipid content when down-regulated. The same genes were identified in M. trunculata and are known to be present in alfalfa. The genome of alfalfa has only been sequenced and assembled to the diploid level which is why M. trunculata was used in this study.

Within the context of the study, VIGS involves the targeting of SDP1, APS1, TGD5, and PXA1 using viral vectors to transport the gene into the host plant via Agrobacterium tumefaciens infection. The genes are transcribed and translated and the double-stranded DNA produced is modified to produce a complex which cuts its complementary RNA. This process leads to the knock-down of the target genes.

Out of all four targeted genes, the authors found that knock-down of SDP1, APS1, and PXA1 produced a significant relative increase in lipid content of M. trunculata plants (3–4% DW) compared to empty vector-infiltrated control plants. Manipulation of these genes was also shown to significantly alter the fatty acid composition of the total acyl lipids of vegetative tissues. Alpha-linolenic acid (18:3) showed a significant increase with the silencing of SDP1 and PXA1. Increased levels of this polyunsaturated fatty acid are known to be protective against cardiovascular diseases and hyperlipidaemia. This could be a benefit for consumers of livestock products. Overall, SDP1, APS1, and PXA1 proved to be promising candidates for genome editing in alfalfa, and are currently being targeted using this platform, to produce lipid-enriched crops that reduce methane production, encourage healthier livestock, and provide consumer health benefits.

Boosting crop yields
Another area of focus for Dr Singer is the improvement of photosynthetic efficiency/capacity of forage crops such as alfalfa under changing environmental conditions. Her research team was on the precipice of starting research in this area but was forestalled by the coronavirus outbreak. When the team are to commence this research, they will be working on identifying genes in wheat, canola, and alfalfa that are important to the process of photosynthesis. Following identification, these genes could be used in downstream molecular breeding experiments.

Dr Singer is focused on the improvement of photosynthetic efficiency/capacity of forage crops such as alfalfa under changing environmental conditions.

In her 2017 review on molecular improvements being made in alfalfa, Dr Singer highlighted a number of genetic tools and methods that could be used to improve productivity and adaptability in forage crops. One way of enhancing photosynthetic capacity is by upregulating the expression of genes involved in photosynthesis, such as those that encode enzymes utilised in the Calvin cycle. This has been conducted for rice and tobacco, resulting in increased photosynthetic activity and increased biomass. However, this was only truly observed in cases of high CO2, light, or osmotic stress. In another review focusing on the potential effects of high CO2 on legumes like alfalfa and soybean (2019), Dr Singer obviates the need to harness crop traits to be able to utilise growing CO2 levels as climate change becomes more pronounced in future.

While some legumes have been shown to thrive under such conditions, this is not the case for all. Factors including a plant’s ability to assimilate CO2, store carbon, fix and utilise nitrogen, and harness energy from symbiotic relationships with bacteria all contribute to crop biomass and overall yield. Ascertaining the underlying molecular mechanisms behind these qualities will be key for conducting molecular breeding experiments to engineer climate-resilient cultivars for future food security.

Abiotic stress resilience
In addition to improving forage plant traits and livestock performance for more sustainable agricultural practices, Dr Singer is interested in the modulation of genes in alfalfa to increase resiliency to abiotic stress. She is particularly focused on improving tolerance to drought, salinity, and flooding, which are likely to become more pronounced as climate change intensifies.

Alfalfa is known to be quite resilient to drought, but the trait may need to be enhanced as temperatures rise and water sources for crop cultivation become scarce. Flooding and increased levels of salinity will be detrimental to crop production if not monitored and prepared for. Molecular knowledge of the pathways involved in the plant stress response, particularly of alfalfa, to any of these aforementioned stresses will enable the targeting of genes for molecular breeding of highly resilient cultivars. Dr Singer endeavours to utilise transcriptomics and metabolomics to identify genes and molecules in wild relatives of alfalfa that may play a beneficial role in this context. A successful CRISPR/Cas9-mediated genome editing platform has also been developed in this species (in collaboration with Dr Abdelali Hannoufa from AAFC in London, Ontario), and is currently being used to target multiple genes with the aim of improving abiotic stress tolerance. 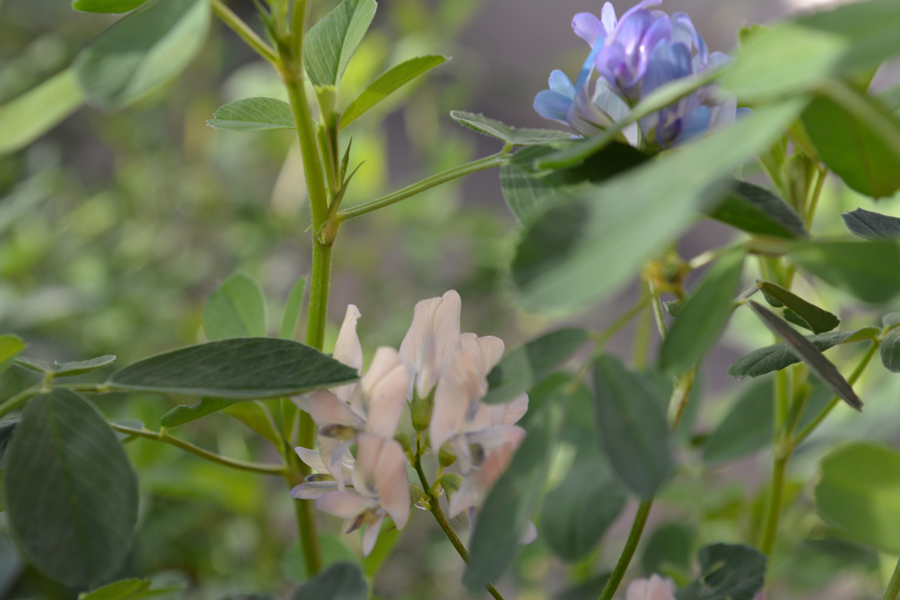 What advancements in improving forage crop traits might the scientific community expect through the use of CRISPR/Cas9 technology?

<> This technology is advancing at an incredible pace, and the number of traits that have been improved in plants using CRISPR/Cas is growing rapidly. In other plant species, enhancements in disease resistance, abiotic stress tolerance, yield, and nutritional quality have been achieved, and there is no reason that this could not also be the case in alfalfa. Genome editing is akin to gene surgery – we are modulating a single, pre-defined region of DNA for mutation. It is highly specific compared to other breeding techniques and has the potential to improve the pace of crop breeding substantially. 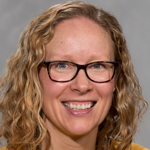