Greenhouse gases pose a major environmental threat that needs to be tackled. Nanotechnology offers great potential, with novel nanomaterials such as metal-organic frameworks (MOFs) being strong candidates for the adsorption of greenhouse gases. Dr Ocean Cheung, assistant professor at Uppsala University in Sweden, looked into a MOF sub-category, zeolite imidazolate frameworks (ZIFs), and examined how mixing raw materials for ZIF production could result in porous materials with properties tuned towards efficient carbon capture and gas separation.

Greenhouse gases and global warming have become household terms in recent years and most of us are familiar with the threats they pose. Of the several greenhouse gases, carbon dioxide (CO2), methane (CH4), and fluorinated gases, such as sulphur hexafluoride (SF6), are of most interest. Greenhouse gases are emitted when burning fuel for power or heat, during chemical reactions, or during animal agriculture, among other sources.

Especially in the case of burning fuel and chemical reactions, there has been a lot of research over recent decades into creating a carbon capture system that can successfully remove harmful greenhouse gases from the bulk of emissions. Ideally, this would perform gas separation, selectively removing specified gases from the emissions stream, rather than aiming to capturing all gases at once. So far, there have been a few proposed and applied options, such as carbon capture using amine-containing liquid (amines act like a ‘glue’ for CO2). However, these methods are not viable, mainly due to their high cost and high maintenance requirements, hence ongoing research needs to focus elsewhere.

Nanotechnology to the rescue
The field of nanotechnology has developed massively over the past few years, with novel nanomaterials and their applications appearing in numerous sectors. With a vast list of available materials and an even bigger list of advantages, several categories of nanomaterials are now being researched for their ability to capture carbon and separate gases from emission streams. These include zeolites (microporous solids containing aluminium and silicon), activated carbons (carbonaceous materials with enhanced porosity), silica gels (amorphous materials based on silicon dioxide), and metal-organic frameworks (porous compounds consisting of metal ions and organic ligands). All of these classes of nanomaterials also belong under the umbrella of ‘framework porous materials’.

Metal-organic frameworks have drawn much attention due to their ability to form geometric, coordinated frameworks that offer controlled porosity.

Framework porous materials have a usually geometric structure that allows for void space (porosity). The most common analogy to understand porous materials and porosity are sponges, which have an ostensible external volume, but due to their structure they hide a much bigger internal void volume that can be used to carry or store other materials. For example, a sponge can take up a large volume of water. Another important property of nanomaterials, especially useful in carbon capture and gas separation, is selectivity. This describes the ability of porous nanomaterials to selectively remove a substance from a mixture, usually based on size exclusion through fine-tuning of pore sizes, or affinity of a substance to the specific nanomaterial. This idea is very similar to sieving or filtering, using a sieve of certain size allowance, or a magnet. Only items of certain size will pass through the sieve (size exclusion), and only magnetised items will be attracted to the magnet (affinity). Nanomaterials that can separate gases based on porosity in combination with affinity are called adsorbents, and the separation procedure is called adsorption.

Creating nanomaterials that fit the porosity and selectivity brief required for gas separation, on top of other beneficial properties, can be quite tricky, as the dimensions involved are in the range of nanometres, a billion times smaller than meters. Production and regeneration costs at bulk, while being sustainable, can also be very high. Consistency of the pores and of the pore network is key, alongside careful tuning of the affinity to reinforce the gas separation and carbon capture process.

Dr Ocean Cheung, assistant professor at Uppsala University, Sweden, has been looking into a novel approach to this problem.

Metal-organic frameworks
Out of the aforementioned nanomaterials, metal-organic frameworks (MOFs) have drawn much attention, mainly due to their ability to form geometric, coordinated frameworks that offer controlled porosity. A relatively new sub-category of MOFs is ZIFs, zeolitic imidazolate frameworks. As opposed to MOFs which consist of various metal ions or ion clusters and various organic linkers, ZIFs consist of transition metal ions (iron, cobalt, copper, zinc) and imidazole-based linkers (imidazole is an organic ring molecule with three carbon and two nitrogen atoms). Different metal and linker combinations can result in ZIFs with different physical and chemical properties, and careful selection of starting materials can allow for fine-tuning of final properties.

Dr Cheung’s research has focused on the selective adsorption of two important greenhouse gases – CO2 and SF6 – using ZIFs. He explored the potential of synthesising ZIFs using mixed imidazole-based linkers instead of only one. He used two well-known single-linker ZIFs as base, ZIF-7 (mIm linker) and ZIF-8 (bIm linker), and a mixture of mIm and bIm linkers at various percentages, to synthesise novel ZIFs with different properties. Cheung characterised these novel ZIFs using several methods to identify their physical and chemical properties and tested them to identify their potential for carbon capture and gas separation.

Several categories of nanomaterials are now being researched for their ability to capture carbon and separate gases from emission streams.

Carbon capture using ZIFs
In both MOFs and ZIFs the linker has proven to be very important for the structure of the final material and in consequence the properties it will have and its performance on applications. Dr Cheung synthesised eight different ZIFs containing both mIm and bIm linkers at different percentage ratios and compared their properties to ‘parent’ compounds ZIF-7 (only mIm linker) and ZIF-8 (only bIm linker). The idea behind mixing linkers was to fine-tune the pore size of the resulting materials and ‘borrow’ properties from both parents, in order to improve their selectivity of greenhouse gases over nitrogen and enhance their carbon capture and gas separation performance.

When the new ZIFs were characterised, it was generally shown that properties fell in between those of ZIF-7 and ZIF-8. When carbon capture and gas separation abilities were examined, performances were particularly enhanced, highlighting the potential of mixed linkers for ZIFs to be used in such applications. Dr Cheung showed that by mixing linkers in appropriate ratios he was able to fine-tune the pore size of ZIFs. A 90% bIm percentage (closer to ZIF-8) resulted to an efficient adsorbent for carbon capture, with pores of a very small size that only CO2 would fit in. A 74% mIm percentage (closer to ZIF-7) resulted in a highly selective sorbent for SF6 gas separation, with pores tailored to the size of the SF6 molecule. The targeted greenhouse gases were physisorbed onto the ZIFs, meaning that the gas molecules were attached on the pores through weak chemical interactions, and indicating that CO2 or SF6-loaded ZIFs could be easily regenerated and reused. Further analysis showed that CO2 adsorbed much faster (seconds) than SF6 (minutes), and mathematical evaluation of results revealed the models that described the adsorption on each occasion, showing how the different ratio of mIm to bIm affected adsorption performances.

Zeolites and amorphous carbons
Dr Cheung’s research interests extend to other framework porous materials, including looking at the potential of zeolites for carbon capture. One recent study showcased the ability of zeolites synthesised with exchangeable cations (such as sodium or potassium) and varying ratios of silicon to aluminium. He found that the ratio of silicon to aluminium, as well as the introduction of potassium exchangeable cations, affected the ability of zeolites to adsorb CO2 efficiently. In a separate study, Dr Cheung examined the potential of amorphous (non-crystalline) porous carbons to selectively adsorb SF6. The synthesised materials had a very high porosity and scored SF6 uptakes among the highest reported in literature, indicating the potential of such materials for gas separation applications.

Nanotechnology and greenhouse gases
With the world fully waking up to the challenges of global warming, Dr Cheung’s research on the potential use of nanotechnology and framework porous materials to tackle the presence of greenhouse gases shows great potential. His work indicates several options specifically for carbon capture or SF6 gas separation and structural and performative insight on how these materials could be used in adsorption.

How easy is to produce ZIFs at commercial scale for industrial applications?

When materials such as MOFs and ZIFs were first developed and introduced, the production costs were very high. Therefore, zeolites which had been around for much longer and could be found in nature had always had the edge over MOFs and ZIFs in various applications. Despite the high production cost of MOFs and ZIF at first, years of collaborative research and development improved the efficiency of the production of these materials. One of the most studied MOFs (MOF-5) is now being produced on an industrial scale at a very comparable costs to zeolites. Similarly for ZIFs, as long as scientists and engineers work together, low costs, efficient and large scale production will be possible. 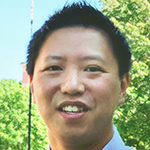 Originally from Hong Kong, Ocean did his secondary education in the UK. He holds a Master of Chemistry (MChem) degree from the University of Warwick, UK, and a PhD in Materials Chemistry from Stockholm University, Sweden. He has been an assistant professor at Uppsala University in Sweden since 2019.

Artwork by Jessica and Jannica Westergård.

Careful catalysis converts CO2 emissions into useful chemicals
Physical Sciences
Read This Article
When control is lost: Studying the interactions of ATP and acetylcholine in the urinary bladder
Health & Medicine
Read This Article