Physical Sciences
Positron emission tomography (PET) is a powerful imaging technique that uses radiotracers injected into the body to look at biology in tissues and cells, making it an important tool in biomedical research and drug development. Dr Victor Pike, Chief of the PET Radiopharmaceutical Sciences Section of the Molecular Imaging Branch at the National Institute of Mental Health in the U.S., has been using radiochemistry to develop new radiotracers with not only long-term potential to improve existing medical diagnosis and treatment but also to enhance the use of PET to look anew at diseases and biological processes.

Medical imaging is all about finding ways to peer inside our bodies. Diagnosing diseases and problems that cannot be seen is a challenging task, and so doctors depend heavily on the help of medical imaging devices and their inventive ways of visualising internal organs, tissues and biological processes.

Most types of medical imaging devices rely on light with wavelengths that are invisible to the human eye. Probably the most widely used kind of light are X-rays, an example of light with a very short wavelength that is very efficiently absorbed by dense tissue like bone. This strong absorption means that X-rays can give very high contrast images of the structure of the bone that can be used to identify breaks and fractures.

Some medical imaging techniques make use of radioactive tracers to capture not just static images of the structures in the body but also to visualise biochemical mediators and processes, and thereby gain information on normal or impaired function. A paramount example of this kind of imaging technique is positron emission tomography (PET). This uses radioactive tracers that very quickly decay to give pairs of gamma rays of a specific energy that can penetrate tissue. These rays can be detected when arriving outside the body by sensitive PET scanners. A scanner surrounds an area of the body (e.g. the trunk or brain) with highly sensitive gamma ray detectors that record images every few minutes. ln this manner, the location of the radiotracer in the body, even in an organ such as the brain, can be accurately determined. If you go for a PET scan, you will be carefully placed inside the scanner and you will usually be given the radiotracer by injection.

PET radiotracers capture not just images of structures in the body but also visualise biochemical mediators and processes, and thereby gain information on normal and impaired function.

Radioactive tracers
The radiotracer is key to providing specific biological information relevant to understanding disease processes and their treatment. The kind of information that is obtained depends critically on the molecular design of the radiotracer. For example, a radiotracer based on glucose, an important energy source that we obtain from food, will be transported to cells that need glucose for energy. The brain uses glucose almost exclusively for its energy. Cells with a higher energy demand would use more glucose, and so greater amounts of radiotracer build up in regions with these cells. In this way, for example, energy-demanding tumours may be detected as very bright spots on a PET scan.

Radiotracers must contain a source of radioactivity called a positron-emitter, a special kind of radioisotope that gives off gamma rays. Often, these isotopes have very short half-lives, meaning they undergo radioactive decay rapidly, ultimately to the point where they no longer emit radiation. Therefore, PET scans pose little radiation risk. However, there is a constant need and demand for new types of radiotracers that can be used to image different facets of biochemical processes and their roles in disease, including neurological and psychiatric diseases. Generating the new radiotracers is a challenging task – especially because it may require new chemistry to be developed to successfully incorporate a positron-emitter into a new radiotracer. Dr Victor Pike, Chief of the PET Radiopharmaceutical Sciences Section of the Molecular Imaging Branch at the National Institute of Mental Health in the U.S., and his research team focus on developing new radiotracers that expand the range of processes that PET can be used for imaging, especially in the brain.

One of the enzymes in the brain that has just now been visualised is a potential drug target for Alzheimer’s treatments.

New tools for PET radiotracer development
Dr Pike’s research looks at new ways of synthesising radiotracer compounds. Typically, radiotracers are made by incorporating either of two positron-emitters, carbon-11 or fluorine-18, into the tracer. In our daily lives we encounter carbon mainly in the form of carbon-12, which is not radioactive and is therefore known as a stable isotope. Carbon-11 is still carbon but has one fewer neutron in its nucleus than carbon-12. This neutron deficiency makes it unstable. The half-life of carbon-11 is just 20 minutes – meaning that every 20 minutes half of what remains disappears. The positron that is emitted during decay annihilates with a nearby electron to give the two equal energy gamma rays according to Einstein’s equation, E = mc2.

There is no natural source of carbon-11 or fluorine-18. These radioactive isotopes must be created with machines known as cyclotrons, where the nuclei of particular types of stable atom are bombarded with high energy particles to make new radioactive atoms. Part of the problem with carbon-11 and fluorine-18 is that they can be produced from a cyclotron only as part of a few simple chemical compounds like carbon dioxide, methane and fluoride. This means the chemical conversion of one of these to make a more complex PET radiotracer is challenging and a race against time.

However, Dr Pike and his team have found a way of synthesising several new radioactive reagents, including [11C]fluoroform, in which stable carbon is replaced with carbon-11, and [18F]fluoroform – fluoroform in which one non-radioactive fluorine atom is replaced with a fluorine-18 atom. The key advantage of his synthetic routes to these new radioactive reagents is that they can be performed in the gas phase and are fast, highly reliable, and reproducible. Being able to synthesise more complex radioactive chemicals than carbon dioxide and methane means a greater number of starting materials are available for even more ambitious chemical syntheses of PET radiotracers. The new reagents are highly versatile and efficient in their applications. For [11C]fluoroform, the synthesis process makes use of cyclotron-made radioactive [11C]methane, and is rapid, simple, and reliable. Another even more recent development makes a useful radioactive analogue of phosgene from 11C-labelled carbon dioxide. This also shows great potential for making new types of PET radiotracer.

New possibilities
[11C]Fluoroform and other radioactive reagents developed by Dr Pike and his team have potential to create new kinds of radiotracer with possibilities to look at a broader range of biological processes and their biochemical components. Biochemical components include, for example, enzymes and proteins laid down in Alzheimer’s disease, and proteins and enzymes involved in harmful inflammatory processes. In fact, one of the enzymes in the brain that has just now been visualised is a potential drug target for Alzheimer’s treatments. PET imaging of this enzyme can be used to show how new candidate drugs might affect this target, and whether the drugs might work.

The success of PET as a medical imaging technique is dependent on the creation of suitable radiotracers. Creating new compounds, either for radioactive labelling of radiotracers or to use as radiotracers directly, is a complex process, particularly given the short lifetimes of carbon-11 and fluorine-18 as both isotopes undergo radioactive decay on short timescales. However, Dr Pike’s developments in this area not only increase the possibilities of chemical compounds that can be created with these unstable isotopes, but also the possibilities of what can be seen with PET in the future. This will help to unleash the technique’s potential for medical research and new drug development.

What do you think are the next major challenges in creating new radiotracers?

<> Aside from the major challenges of discovering ever-better and more versatile methods for labelling radiotracers with carbon-11 or fluorine-18, major challenges still lie ahead in the design of PET radiotracers to show exquisite precision and sensitivity for measuring biological phenomena. This requires strong collaborative efforts. 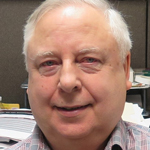 Dr Victor W. Pike is a chemist and Chief of the PET Radiopharmaceutical Sciences Section at the Molecular Imaging Branch of the National Institute of Mental Health (USA). He has over four decades of experience in developing radiotracers for brain imaging with PET.

Dr Pike and his team have successfully synthesised new radioactive labelling agents with potential to usher in a new realm of PET radiotracers.