Health & Medicine
In recent years, immunooncology has paved new avenues for effective treatment across cancer types. In addition to cytotoxic chemotherapy, we can now harness the power of the human immune response against malignant cells. However, immunotherapy is not perfect, and as always, cancer has mechanisms to evade these attacks. Dr Svetlana Hamm, Head of Research and Translational Medicine at 4SC in Germany, has uncovered an exciting new combination therapy which has the ability to increase anti-tumour efficacy of immunotherapies. 4SC, a German biotech company, is developing this combination for treatment of cancer patients resistant to PD-1/PD-L1 therapy.

In the last few years, immunotherapy has become one of the leading methods of cancer treatment. Immunotherapy stimulates the immune system to destroy tumours more effectively and can be used in monotherapy as well as in combination with other cancer therapies or surgery. Now, scientists are finding ways to refine immunotherapy through enhancing the tumour cell immunogenicity, increasing the number of immune cells at the tumour site, or by blocking specific molecules which cancer cells produce to suppress the immune system’s attack on the tumour.

One particularly exciting immunotherapy combination approach has been discovered by the Research and Translational Medicine group at 4SC, headed by Dr Svetlana Hamm. Along with her team, she is exploring the potential of an HDAC (histone deacetylase) inhibitor called domatinostat. Domatinostat works in conjunction with immunotherapy, specifically one that targets the PD-1/PD-L1 (programmed death protein 1 and PD-ligand 1) axis, with the aim to restart the immune system’s attack on the tumour.

Cancer immunity and the PD-1/PD-L1 axis
Genetic mutations in cells can result in a dysregulation of cellular processes and uncontrolled cell proliferation, eventually causing tumourigenesis. On the other hand, mutations and dysregulated gene expression cause tumour cells to produce tumour antigens and release signals, marking them as foreign and dangerous to the organism. Depending on how visible this process is to the body, the immune system will respond and eliminate such cells. However, often cancer cells remain unnoticed or manage to block the immune attack.

Domatinostat aims to restart the immune system’s attack on the tumour and works in conjunction with immunotherapy, specifically one that targets the PD-1/PD-L1 axis.

The immune response generally involves an influx of specific cells of the immune system, so-called cytotoxic T cells (CTLs), to the tumour site. These cells specifically kill tumour cells through recognition of their tumour antigens. However, tumour cells can block this attack by upregulating the PD-L1 molecule on the surface. PD-L1 binds to the inhibitory PD-1 receptor expressed on CTLs, blocking their activity and rendering them essentially useless. The so-called checkpoint blockade is one form of immunotherapy which stops the PD-L1 molecule from binding to the CTL’s PD-1 receptor, thereby unleashing the CTL attack on the tumour cells. As successful as this approach has been in many cases, responses in patients vary greatly between different cancer types and between individual patients. This can be due to the absence of a tumour-specific immune response, downregulation of tumour-specific antigen presentation, or immunosuppressive cells and molecules produced by the cancer cells to inhibit CTL function, independently of the action of PD-L1.

Cancer cells have many defence mechanisms
Tumours can display different levels of immune system involvement. ‘Hot’ tumours have CTLs present in the tumour immune microenvironment but are actively expressing PD-L1 as a defence to suppress the CTL attack (see figure 1, panels 2, 3, and 4). ‘Cold’ tumours do not have immune cells in their microenvironment and likely have avoided immune detection, so there is no need for these tumour cells to upregulate PD-L1 (panel 1). In this case, the aim of the therapy is to ‘heat up’ the tumour and cause CTLs to infiltrate. Checkpoint inhibitors can then contribute to the tumour-specific immune response by blocking the PD-1/PD-L1 interaction, resulting in the killing of cancer cells (panel 2).

Unfortunately, tumours fight back. Tumour cells try to avoid recognition and binding by CTLs through downregulation of antigen presentation (panel 3), or they recruit immunosuppressive cells, which inhibit CTL function. As a result, even where PD-1/PD-L1 is successfully blocked, the microenvironment still manages to inhibit the effectivity of CTLs. The CTLs are then in a so-called exhausted state and thus ineffective (panel 4). Therefore, a drug is needed that can work alongside and complement the checkpoint therapy.

HDAC inhibitors are a group of synthetic molecules which have been shown to increase the expression of cancer antigens and their presentation to CTLs, as well as the number of CTLs in the tumour microenvironment via the production of cellular signals attracting immune cells to the tumour.

Domatinostat, which is a specific HDAC inhibitor, has previously been tested and showed promising anti-cancer activity as monotherapy. Given the varied effectivity of PD-1/PD-L1 blockade dependent on the microenvironment, Dr Hamm and her team at 4SC proposed that the addition of domatinostat would combat cancer defences causing resistance to checkpoint therapy. 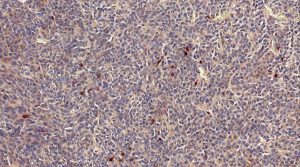 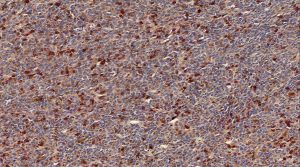 Figure 2: The infiltration of CTLs into the tumour can be analysed by staining these cells with specific colours. Here, tumour cells are blue and CTLs are brown. Domatinostat strongly increases the number of CTLs in the tumour (on the right) compared to the untreated tumours (on the left).

Testing domatinostat in tumour-bearing mice
The first step was to test domatinostat on mice bearing tumour types with varying CTL levels (‘hot’ or ‘cold’ tumours). The mice were then treated with domatinostat and PD-1/PD-L1 blockers (mouse-specific analogues of established human checkpoint inhibitors like nivolumab, pembrolizumab, or avelumab). CT26 tumours are a type of tumour that is considered non-inflamed (cold) and C38 tumours are inflamed (hot).

The results were clear. In the cold CT26 tumours, domatinostat alone decreased the tumour size by half and increased the number of CTLs by eightfold (see figure 2). Furthermore, the treatment triggered the immune-related cellular machinery, enhancing inflammation and turning the tumour into a hot one. Domatinostat also increased the recognisability of tumour cells to the CTLs by upregulating the production of tumour antigens and their presentation on the cell surface. When a combination of domatinostat and PD-1/PD-L1 blockers was administered, the anti-tumoural effect was increased further, whereas PD-1/PD-L1 blockers alone were not effective.

The results from the hot C38 tumour model were similarly impressive. Although C38 tumours already accommodate a high number of CTLs, these cells are not able to eliminate the tumours because of their exhausted state. Consequently, blockade of PD-1/PD-L1 alone has only a minor effect in this type of cancer. Domatinostat, however, managed to increase the number of CTLs in these tumours by nearly twofold, and more importantly, also increased their activity and effectivity. As a result, a greatly increased survival time was achieved, both with domatinostat alone as well as in combination with PD-1/PD-L1 blockade, which resulted in complete healing of more than 50% of the test animals.

Adding to the cocktail
MHC-II (major histocompatibility complex-II) molecules are proteins present on the surface of cells. They support the generation of additional tumour-specific CTL types, thereby enhancing the immune attack on the tumour. Domatinostat has been shown to increase MHC-II molecules in tumours. However, this beneficial effect on the immune response generation is often found to be levelled out by a negative effect on CTL activity due to the binding of MHC-II to another inhibitory CTL receptor LAG3, which blocks the function of CTLs similarly to PD-1. Thus, in another experiment with tumour-bearing mice, Dr Hamm and her team at 4SC added a LAG3 blocker to the mix of domatinostat and PD-1/PD-L1 blockade. This resulted in even higher anti-tumour activity, with the tumour regressing in 80% of the animals tested.

Another important component in this context is a cellular molecule called 4-1BB, which is a co-stimulatory receptor for CTLs. Co-stimulation is a mechanism required by CTLs to become fully effective. 4-1BB encourages CTL proliferation, and when CTLs are exhausted, co-stimulatory receptors like 4-1BB can partly restore their cell-killing capabilities. Indeed, co-stimulation of 4-1BB was found to be more efficacious than PD-1/PD-L1 blockade, with a response rate of 35% in these hard to treat T cell-exhausted tumours. Remarkably, when domatinostat was added, the response rate doubled to 70%.

In this trial, domatinostat is given as monotherapy for two weeks before checkpoint blockade is added. The 4SC team monitors the expression of relevant genes in the tumours of patients before and after administration of domatinostat. They observed increased expression of cancer antigens, antigen presenting machinery and enhanced inflammation in the first patients evaluated, which confirms the observations from the prior animal tests, and implies an increased susceptibility to the subsequent treatment with checkpoint inhibitors.

From bench to bedside
Domatinostat has proved itself in these early tests to be a very effective combination partner for PD-1/PD-L1 inhibitors. As described above, it accomplishes this by not only increasing CTL count in the tumour microenvironment, but also by enhancing CTL activity and effectivity, and activating immune pathways which combat the cancer cell resistance mechanisms. These effects are expected to be particularly useful in cancers like melanoma, Merkel cell carcinoma (MCC), urothelial cancer, and colorectal carcinoma.

These early biomarker results for domatinostat therapy from the SENSITIZE trial are very encouraging and the whole 4SC team is looking forward to continuing development of this potentially practise-changing drug for combination immunotherapy.

What did the toxicity profile look like in the patients tested so far?

<> Domatinostat alone, as well as in combination with pembrolizumab, was safe and well-tolerated in patients. So far, only a few severe treatment-related adverse events have been observed and the SENSITIZE trial continues to recruit patients. Additionally, domatinostat is under evaluation in further clinical trials testing the combination of domatinostat with checkpoint inhibitors in patients with colorectal and gastric cancer or with MCC that is relapsed or refractory to checkpoint inhibitor therapy.

Hassel, J.C. et al. (2019). Phase Ib/II study (SENSITIZE) assessing safety, pharmacokinetics (PK), pharmacodynamics (PD), and clinical outcome of domatinostat in combination with pembrolizumab in patients with advanced melanoma refractory/non-responding to prior checkpoint inhibitor. Annals of Oncology, 30, v559. Available at: https://doi.org/10.1093/annonc/mdz255.058
Poster available at: https://www.4sc.de/wp-content/uploads/SENSITIZE_Poster_ESMO_final.pdf Hegde, P.S. et al. (2016). The Where, the When, and the How of Immune Monitoring for Cancer Immunotherapies in the Era of Checkpoint Inhibition. Clinical Cancer Research, 22, 1865–74. Available at: https://clincancerres.aacrjournals.org/content/22/8/1865 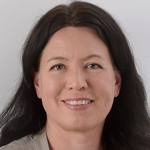 Dr Svetlana Hamm has been working in the area of cancer immunology for more than 15 years. She is Head of Research and Translational Medicine at 4SC. 4SC, a biotech company in the South of Germany, is developing new therapies supporting the patient’s immune system with the aim to change the way cancers will be treated in future, providing lasting responses and definitive cure.

Dr Hamm and her team are examining the HDAC inhibitor domatinostat and its ability to increase anti-tumour efficacy of immunotherapies.