Health & Medicine
The link between two classes of essential fatty acids – omega-3 and omega-6 – and health has, until now, been unclear. This is partly because it has been difficult for researchers to define exactly what each does in the body. To address this problem, Dr Jing X. Kang of Massachusetts General Hospital and Harvard Medical School, USA, developed novel strains of genetically modified mice, each of which was able to produce defined types and quantities of the fatty acids. The work revealed that the tissue/cellular ratio between omega-6 and
omega-3 is crucial and of great significance in the development of chronic diseases such as cancer and diabetes.


In many fields of medical care, treatments are now available that would have been impossible even a few decades ago. Unfortunately, despite these advances, chronic diseases are on the rise. Around the world, the number of people living with serious conditions such as diabetes, cardiovascular disease and cancer is steadily and constantly increasing.

There are many possible explanations, ranging from genetics to lifestyle, for the inexorable rise in chronic illness. However, researchers have noticed that the growing prevalence of chronic diseases appears to coincide with an increase in omega-6 fatty acids in the diet, and a corresponding decrease in omega-3 fatty acids. This change is likely due to the shift in farming methods and a move towards processed foods in many parts of the world.

Both omega-6 and omega-3 are essential for health and must be obtained from food; these are the only two fatty acids that humans cannot synthesise themselves. Omega-6 is found in ‘healthy’ foods like nuts, seeds and vegetable oils, but is also common in processed foods and snacks, and fatty or cured meat. Omega-3 is also found in certain nuts and seeds, as well as fish like mackerel, salmon and sardines. These fatty acids play many vital roles in the body: they are essential components of cell membrane and are involved in inflammatory processes and blood clotting, for example.

Some research has linked high levels of omega-6 to chronic inflammation in the body. This could contribute to serious and long-term conditions like arthritis. Confusingly, however, other studies have contradicted this claim, with the results suggesting that omega-6 is not only safe but could actually boost some aspects of cardiovascular health. Meanwhile, other researchers have found that omega-3 may be able to reduce inflammation. To unravel the true benefits and risks of these two essential fatty acids, a new approach is needed.

Revealing the fatty acid ratio
Researchers investigating the role of fatty acids in health and disease have tended to focus on either omega-3 or omega-6. The relationship between the two fatty acids, and particularly the tissue/cellular ratio of omega-6 to omega-3, has, until now, been neglected. This is partly because it has proven difficult to determine the roles of each fatty acid in the presence of other nutrients, which act as confounding factors.

Researchers have noticed that the growing prevalence of chronic diseases appears to coincide with an increase in omega-6 fatty acids in the diet.

To tackle this problem, Dr Jing X. Kang and his team at Massachusetts General Hospital and Harvard Medical School have developed unique strains of genetically modified mice. These mice have the ability to produce certain levels of omega-6, omega-3, or both, within their bodies (something that normal mice, like humans, cannot do). In previous studies, levels of omega-6 and omega-3 have been controlled via supplemented feed. The novel approach taken by Dr Kang and his colleagues allows the researchers to study the effects of varying ratios of the two fatty acids, without the confounding factor of diet which has hindered the research progress in the field.

In a recent project, Dr Kang used different types of mice to investigate the effects of the omega-6/omega-3 ratio on metabolic conditions and chronic diseases. Four groups of mice were selected: wild-type, or ‘normal’, mice, which cannot synthesise omega-3 or omega-6; a genetically-modified strain the team called FAT-1, which can produce omega-3; FAT-2, which produces only omega-6; and FAT1+2, which produces both omega-6 and omega-3 fatty acids in a ratio close to 1:1. All of the mice were fed an identical diet.

In order to investigate the effects of different omega-6/omega-3 ratios, the research team used the transgenic mice in combination with multi-omics technology. Multi-omics refers to a type of biological analysis in which multiple data sets are considered, including the genome (i.e. all the genetic material of an organism), the metabolome (the total number of metabolites in an organism), and more.

Omega-6/omega-3 ratio influences disease development
The results showed what Dr Kang had suspected: the ratio of omega-6 to omega-3 influences the development of chronic disease. The varying ratio of the two fatty acids seemed to affect the mice in a number of different ways: in their gut microbiota and in the products of metabolism, for example. The mice also differed in their susceptibility to conditions including obesity, fatty liver, glucose intolerance and cancer.

Of the four types of mice, the FAT-2 – which synthesise omega-6 only and had the highest ratio of omega-6 to omega-3 – were the most likely to experience metabolic illnesses and cancer. In fact, by the end of the study, most of the mice in this group had developed liver cancer. In contrast, the FAT-1 and FAT1+2 mice were at far lower risk of these conditions. The latter two groups of mice had a balanced ratio of the two fatty acids, as their bodies were able to convert omega-6 to omega-3. Interestingly, the FAT-2 mice were also heavier, with a higher level of body fat, than the other three groups – despite all the mice receiving the same diet.

Further analysis of the data revealed that the ratio of omega-6 to omega-3 had profound effects on the gut microbiota of the mice. There were clear differences in the types of bacteria found in the FAT-2 mice when compared with the other three groups, and especially with the FAT-1 and FAT1+2 mice.

Many of the bacterial species found in the FAT-2 mice were pro-inflammatory; in other words, they may encourage the development of long-term inflammation in the body. The FAT-2 mice also had a correspondingly low number of anti-inflammatory bacteria. This suggests that an altered gut microbiota as a result of a high omega-6/omega-3 ratio could play an important role in the development of chronic diseases.

The ratio of omega-6 to omega-3 had profound effects on the gut microbiota of the mice.

Is omega-6 responsible for chronic disease?
While previous research has suggested a link between omega-6 and the development of chronic disease, the precise way in which this might happen has been unclear. Now, though, the results obtained by Dr Kang and his colleagues suggest a route via which the omega-6 to omega-3 ratio might directly influence chronic disease.

Dr Kang’s research has shown that the two essential fatty acids, while similar in many ways, are not equal. In fact, the two substances appear to exert not just different, but opposite influences in some chronic conditions. While omega-6 tends to promote chronic inflammation – which can, in turn, lead to other serious conditions – omega-3 tends to do the opposite. Overall, there is good evidence that excessive consumption of omega-6 is linked to poor health. To balance the ratio of essential fatty acids, an increase in omega-3 is likely to be necessary.

Preventing chronic disease through dietary change
The research conducted by Dr Kang and his team clearly suggests that a diet high in omega-3 and low in omega-6 might help to prevent or manage many chronic diseases. This has significant implications for public health advice, which often does not differentiate between the two essential fatty acids.

Research suggests that most people alive today have an omega-6 to omega-3 ratio of around 10:1 or higher. To put this into context, for most of human history the ratio would have been close to 1:1. Given the ever-increasing prevalence of diseases such as cancer, diabetes and arthritis, most of us are likely to encounter at least one of these conditions during our lifetime. Dr Kang’s research strongly suggests that reducing omega-6 in our diets, while boosting omega-3, could help to prevent these debilitating illnesses – a finding which is surely relevant to almost everyone, around the world.

Are there any other areas in which the transgenic mice used in this research might be useful?

<> The creation of the FAT-1 mouse model has opened new frontiers for omega-3 research. This unique model made it possible to study the authentic biological functions of omega-6 and omega-3 fatty acids without the confounding factors of diet, thereby overcoming the many hurdles of conventional dietary studies. Since it became available in 2004, the FAT-1 mouse model has been widely used by more than 80 laboratories worldwide to study a variety of diseases (over 50 different health conditions) ranging from obesity to cancer. So far, more than 200 scientific papers based on the use of FAT-1 transgenic mice have been published in top journals, which have generated a vast pool of knowledge about the biological effects of elevated tissue omega-3 fatty acids and greatly increased our understanding of the importance of the omega-6/omega-3 ratio in the development of chronic disease. 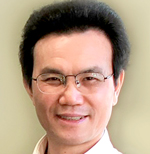 Dr Jing X. Kang is the director of the Laboratory for Lipid Medicine and Technology at Massachusetts General Hospital and Harvard Medical School. He is currently the President of the International Society for Omega-3 Research. He is an expert in using genetically modified animals to study the effects of omega-3 fatty acids and omega-6/omega-3 ratio on health and disease.

Prof Kang is evaluating the impact of varying amounts of omega-6 and
omega-3 fatty acids and their ratios on metabolic conditions and chronic disease development.