Physical Sciences
Raindrops can adopt remarkably similar shapes, sizes and movements as they fall to the ground, but so far, our understanding of their behaviour has remained far from complete. Through her research, Dr Merhala Thurai at Colorado State University uses innovative techniques to learn more about what happens as they fall, particularly during stormy weather. Her team’s work offers important new insights into the physical properties of rainfall, and could lead to improvements in weather forecasting and radio communications in rainy conditions.

Although we barely notice them until they hit the ground, raindrops can display some fascinating behaviours as they descend from the sky. Through the various environmental factors and collisions (with other drops) that they encounter on their journeys, they adopt different shapes and sizes, oscillate in characteristic patterns, and fall at different speeds.

For meteorologists, it is critically important to consider these factors, which have significant influences on the radar techniques used to observe and predict the weather. At the same time, they have important implications for communications systems which use millimetre wavelength electromagnetic waves along earth-satellite links. There is now active research to use the data from such links to infer raindrop characteristics. Dr Thurai uses novel techniques to measure the intriguing attributes of raindrops, gaining new insights into how they fall and change shape.

Conforming behaviours
Mathematically, falling raindrops can be described as spheres for tiny drops; but for larger drops the forces of gravity, surface tension and aerodynamic drag cause a flattening of the base and a convex shape on the top which have been squashed and stretched to varying degrees along its vertical axis, but not as much horizontally. As they interact with the environment and collide with other slower falling ones, they come to steadily oscillate over time. Such shapes are defined through the principle of ‘rotational symmetry,’ which allows an object to be spun around on one particular axis without any apparent change to its shape.

As they form, these shapes will influence the ‘terminal velocity’ of the droplets – a speed limit for falling objects which is reached when their weights equally match their drag due to air resistance. In most circumstances, a vast majority of raindrops will retain their rotational symmetry as they oscillate, until they hit the ground. This remarkable consistency has been widely studied in the past, including by Dr Thurai and her colleagues.

Measuring the dynamics of rainfall
To measure the velocities, shapes and size distributions of raindrops, meteorologists typically use a device named a ‘disdrometer,’ (or drop size meter) which measures the properties of the droplets as they fall onto a sensing surface. More recently, the 2D video disdrometer (2DVD) incorporates both the observations of two cameras facing in perpendicular directions across the sensing surface, and measurements of the drop silhouttes imparted on different parts of the detector by individual droplets. When combined, these techniques make the disdrometer accurate enough to analyse the characteristics of individual raindrops in real time.

The 2DVD has been used to study raindrops at many different locations around the world, at altitudes ranging from sea level to as high as 1.4km. Through a series of studies spanning two decades, Dr Thurai and team have used a 2DVD (Joanneum Research Digital) to probe the physical properties of rainfall in meticulous detail. So far, their techniques have ranged from controlled experiments, to real measurements of natural raindrops.

Artificial and natural rain
In a 2005 study, the team studied the dynamics of artificial rain, created using the Jauntal railway bridge in Austria. Rising 80m above the river below, the bridge provided the researchers with an ideal opportunity to create a controlled simulation of rainfall. When poured from a hose at the top of the bridge, streams of

water quickly formed columns of steadily oscillating droplets, which travelled at terminal velocity by the time they hit the ground. Using 2DVD, the team processed images of 115,000 raindrops, with diameters ranging from 1.5 to 9.5 mm. From these measurements, they could build up ‘probability contours’ of their simulated droplets, revealing how likely it was for individual droplets to adopt particular shapes and diameters.

A vast majority of raindrops conform to the same rotational symmetry as they fall and oscillate; even though their average diameters are significantly varied.

In subsequent work, Dr Thurai and colleagues supplemented these results with measurements of naturally occurring raindrops across widely varied locations, including Alabama, USA, and Queensland, Australia. In most cases, a vast majority of raindrops conformed to the same rotational symmetry as they fall and oscillate; even though their average diameters were significantly varied. In more extreme circumstances, however, this is not necessarily the case.

Exceptional shapes in turbulent conditions
Despite the reliability of the patterns they measured in their earlier studies, Dr Thurai has shown that rotational symmetry in raindrops can be broken when subjected to strong and gusty winds, particularly in storms. In a recent study, she analysed raindrops produced by tropical storm Nate, which struck the US Gulf Coast in October 2017. Taking measurements from Huntsville, Alabama, the researchers again combined 2DVD measurements with the perpendicular camera setup to determine the 3D shapes of individual droplets, which were then recreated through use of custom software by Dr Michael Schoenhuber of Joanneum Research in Graz, Austia.

In turbulent conditions, characterised by sudden changes in wind speeds and directions, they found that the oscillations of the droplets became larger – not only in the usual vertical direction, but also along both horizontal axes. This means that in some, exceptionally rare cases, rotational symmetry can be broken. In turn, these distorted raindrops appeared to become less aerodynamic, with their terminal velocities reduced by as much as 30% as they fall – an effect which the researchers could not fully explain but later attributed to turbulent enhancement of the drag which could ‘slow’ down the drop fall speeds.
Implications for meteorology and communications

This work has important implications for weather forecasting. Since microwaves and shorter radio waves have similar wavelengths to the diameters of raindrops, they are readily scattered in characteristic patterns as they pass through rainfall. To detect rainfall over wide geographical areas, meteorologists employ radar systems to simultaneously send out two streams of polarised radio waves; one aligned in the vertical direction, and the other horizontal. Due to the flattened shapes of raindrops, meteorologists can finely tune these two streams, ensuring a strong interaction with raindrops, giving the best possible accuracy in their final measurements.

Dr Thurai’s team now believe that the advantages of this technique are likely being counteracted (but to 2nd order) by the asymmetrical droplets produced in some types of intense storms where drops are formed via warm rain processes in addition to melting of ice particles formed aloft (e.g., land falling hurricanes and tropical depressions).

The team aims to explore this effect further by combining raindrop measurements with direct measurements of surrounding atmospheric turbulence. Developing new techniques to account for raindrop distortions will enable meteorologists to make better estimates of rainfall characteristics in extreme weather.

More generally, the discoveries made by Dr Thurai provides new insights into the minute yet influential physical processes which play out during rainfall events. Going forward, she hopes that this work could lead to improvements in communications along earth-satellite paths which transmit and receive data in the form of microwave and shorter radio frequencies. By accounting for how these waves are influenced by distorted droplets, this approach could lead to clearer exchanges of information in stormy and rainy weather.

Improving future precision
Dr Thurai expects to make even more advanced discoveries in raindrop physics using new technology, including the ‘3D sonic anemometer.’ Using sound waves to measure wind speeds and directions with pinpoint accuracy, even in rainy conditions, the intensity of the turbulent flow can be characterised, and the drops’ response to it. Combining sophisticated technology with advanced mathematical calculations, the team aims to reveal the underlying mechanisms behind effects such as the reduction in terminal velocity of distorted falling droplets. Ultimately, their research promises to make important advances, both for weather forecasting and radio communications systems, benefiting many lives around the world.

What first sparked your interest in researching rain drop characteristics?

<>My interest in rain drop characteristics stemmed from my work relating to atmospheric effects on radiowave propagation, in particular the effects in rain. With developments in instruments such as the 2D video disdrometer, it became possible to characterise the essential parameters such as shapes and fall velocities on a statistical basis. Together with developments in polarimetric weather radar worldwide we can now study the variations in a variety of rain types and locations. I have worked with many colleagues with genuinely shared interests in this topic. 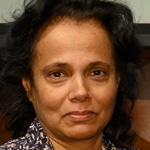 Dr Thurai received her B.Sc. from Imperial College, London, (1980) and Ph.D. from King’s College, London (1985) in Physics. She worked at Rutherford Appleton Laboratory from 1986-2000 before moving to Colorado State University in 2004.