Health & Medicine
Knowledge is power and in this modern age, data is often our most valuable commodity. Nowhere is this truer than in healthcare, where patient data is revolutionizing the way we treat diseases such as cancer. To that end, the National Prostate Cancer Register (NPCR) is providing a valuable resource for physicians, patients, and researchers. And it has already contributed to several improvements to prostate cancer care in Sweden.

The National Prostate Cancer Register (NPCR) of Sweden is a clinical cancer register, which serves as a tool for quality assurance and research. The ultimate goal of the NPCR is to ensure that every man diagnosed with prostate cancer receives optimal treatment. The NPCR enables this by collecting information on men diagnosed with prostate cancer, their treatments and the outcome of treatments. Information in NPCR is used in a number of ways by patients, physicians and researchers to improve patient outcomes.

The forerunner to the NPCR was the Southeast Regional Prostate Cancer Registry, set up in 1987. Other healthcare regions joined and by 1998 all six of Sweden’s healthcare regions were part of NPCR. Since 1998, NPCR has captured information from 98% of all newly diagnosed cases of prostate cancer as compared to the National Cancer Registry to which reporting is mandated by law. As of March 2018, a total of 181,660 cases of prostate cancer had been registered. 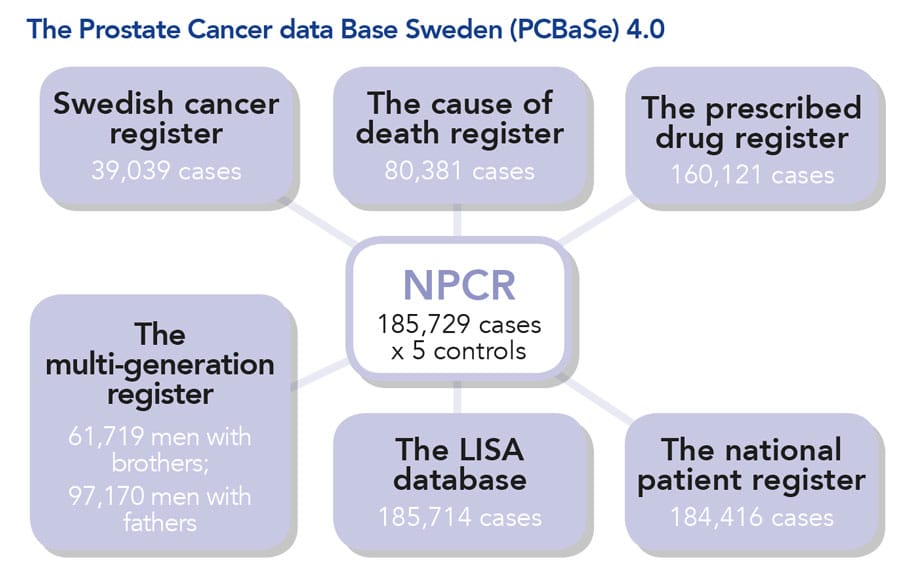 Management and operation of the register is overseen by its steering committee, consisting of one urologist and one oncologist from each of the six healthcare regions in Sweden, as well as two patient representatives. The Swedish Association of Local Authorities and Regions is a major funding body of NPCR.

Using the unique Swedish person identity number, the NPCR has been linked with a number of other registries such as The National Patient Registry, the Cause of Death Registry and the Prescribed Drug Registry in the Prostate Cancer data Base Sweden (Fig 1). This means that researchers now have access to a database of close to 200,000 prostate cancer cases and one million prostate cancer-free men to use as controls, creating an invaluable resource for research. The usefulness of PCBaSe as a tool for researchers is evident from the fact that it has formed the basis of more than 130 peer-reviewed research articles since its inception in 2010.

Raising standards of care
The reports generated from data in NPCR allow both patients and physicians to access information on quality of care in all departments in Sweden and their adherence to the national treatment guidelines.

The first of these reports, termed “What’s going on” is a dashboard panel that enables healthcare professionals to access data on patient treatment in real-time on a secured server (Fig 2). Data is collected, collated, and reported promptly, and the system is designed to provide information in a user-friendly format that enables efficient quality control of patient care. The service allows physicians to select specific groups of patients and compare the care provided by their department with national standards and other departments in Sweden. The dashboard report presents results for ten indicators of the quality of care taken from Swedish National Prostate Cancer Guidelines.

Another public reporting system has recently been set up. RATTEN (www.npcr.se/RATTEN) is an online portal where patients and other stakeholders can access a database and create reports according to their own requirements (Fig 3). At the RATTEN home page, the viewer is presented with a short report and some key data, they can then select the healthcare region, year of diagnosis, age and cancer risk category they desire in order to create a report for their

desired population. The data can then be presented as a table, figure, or heatmap, and users can export the results as a spreadsheet.

The steering committee of the NPCR strongly promotes the use of the What’s going on and RATTEN reporting systems, as they firmly believe that use of these systems by healthcare professionals and patients will improve standards of care in the treatment of prostate cancer. Indeed, improvements have already been seen as a result of the work of NPCR. For example, the NPCR has repeatedly drawn attention to the number of men with low-risk prostate cancer who received bone scans at each department in its annual report. In 2008 and 2009, the number of patients receiving these unnecessary investigations was as low as 3%, down from 45% in 1998. The use of active surveillance, the recommended treatment strategy for low-risk cancer, increased from 40% to 74% between 2009 and 2014. Although this is also the recommended treatment in many other countries, no other register has reported such high use of active surveillance.

A randomized clinical trial showed the superiority of radiotherapy and androgen deprivation therapy (ADT) as compared to ADT alone in decreasing mortality. Accordingly, in men aged 70–80 with high risk, non-metastatic prostate cancer, use of radiotherapy plus ADT has increased from 10% in 2001 to almost 50% in 2012 (https://statistik.incanet.se/npcr/; Fig 3c). The steering committee believes the NPCR shares the credit for bringing about these positive changes.

NPCR as a research tool
Post-authorisation safety studies (PASS) are investigations of rare adverse events from drugs that are in common use. To perform such studies, data on drug use and outcome from very large populations are required. PCBaSe is the perfect basis for PASS. In a paper published in JAMA in 2015, Loeb and colleagues used information from the PCBaSe to investigate a purported link between one of the drugs most commonly used to treat erectile disfunction (Viagra, a phosphodiesterase Type 5 Inhibitor PDEi) and an increased risk of malignant melanoma. They found no clinically meaningful increase in risk.

NPCR, a clinical cancer register is used in a number of ways by patients, physicians and researchers to improve cancer care and patient outcomes.

In a more recent study, Robinson et al found little support for an association between the use of GnRH agonists, a drug used by men with advanced prostate cancer and Alzheimer’s dementia, which had been reported in some previous publications. These studies show the value of a comprehensive and readily accessible clinical database with complete data on drug exposure, cancer outcome and other relevant factors such as socioeconomic status.

Future outlook
The NPCR and PCBaSe continue to be improved. For example, NPCR now implements electronic patient reported outcome (PROM) questionnaires distributed before radical radiotherapy and prostatectomy, and after 3 months, 1, 3 and 5 years after treatment. This enables the quality control of the results of radical treatments that carry an important risk of erectile dysfunction and urinary incontinence (Fig 4). NPCR has also initiated Patient-overview Prostate Cancer (PPC) that longitudinally records data on men with metastatic prostate cancer. This is an invaluable resource since there are now several drugs that can increase survival and quality of life in men with metastatic prostate cancer. At the other end of the disease spectrum, diagnosis of prostate cancer has drastically changed with the advent of improved magnetic resonance imaging. The effect of this new diagnostic must be documented and assessed and here also NPCR has an important role to play. NPCR continues to strive to reach the goal that every man diagnosed with prostate cancer receives optimal treatment, maximal cancer treatment with minimal side-effects.
For more information about NPCR visit http://npcr.se//

What does the NPCR steering committee see as the important trends in the future of prostate cancer treatment, and how will the NPCR and PCBaSe evolve to meet those needs?

<>The NPCR steering committee are focusing on reporting of patient reported outcome (PROM) questionnaires as it is a crucial part of the evaluation of the quality of care. PROM is collected both in conjunction with radical therapy and longitudinally in men with advanced prostate cancer.

NPCR: Next generation cancer register was last modified: May 30th, 2019

NPCR is a nationwide, population-based clinical register that captures 98% of all newly diagnosed prostate cancer cases in Sweden since 1998. Through the use of the unique Swedish person identity number, NPCR has been linked to other health care registers and demographic databases in prostate Cancer data Base Sweden (PCBaSe).

The National Prostate Cancer Register (NPCR) is a tool for quality assurance and quality improvement of health care for all men with prostate cancer in all ages in Sweden.