Health & Medicine
The use of pacifiers is an ancient practice, but often becomes a point of debate between parents and professionals. The research of Dr Alejandro Gustavo Jenik, a paediatrician at Hospital Italiano de Buenos Aires, Argentina, aims to explore the relationships between pacifier use and breastfeeding. His current research is investigating the impact of early introduction of pacifiers on breastfeeding prevalence and duration.

Sudden unexpected infant death (SUID), including sudden infant death syndrome (SIDS), is the leading cause of death in the developed world for infants aged one month to one year of age. Recent SIDS rates vary across high-income countries (2012-2014), ranging from 0.05 deaths per 1,000 live births in Sweden to 0.39 per 1,000 live births in the U.S. SUID is defined as the sudden, unexpected death of infants when subsequent investigations fail to demonstrate a definite cause of death. Other causes of SUID must be considered and excluded before a diagnosis of SIDS can be established.

Dr Alejandro Gustavo Jenik is a paediatrician based in the Neonatal Department at the Hospital Italiano in Buenos Aires. His research into SIDS has included investigating pacifier use in relation to breastfeeding. 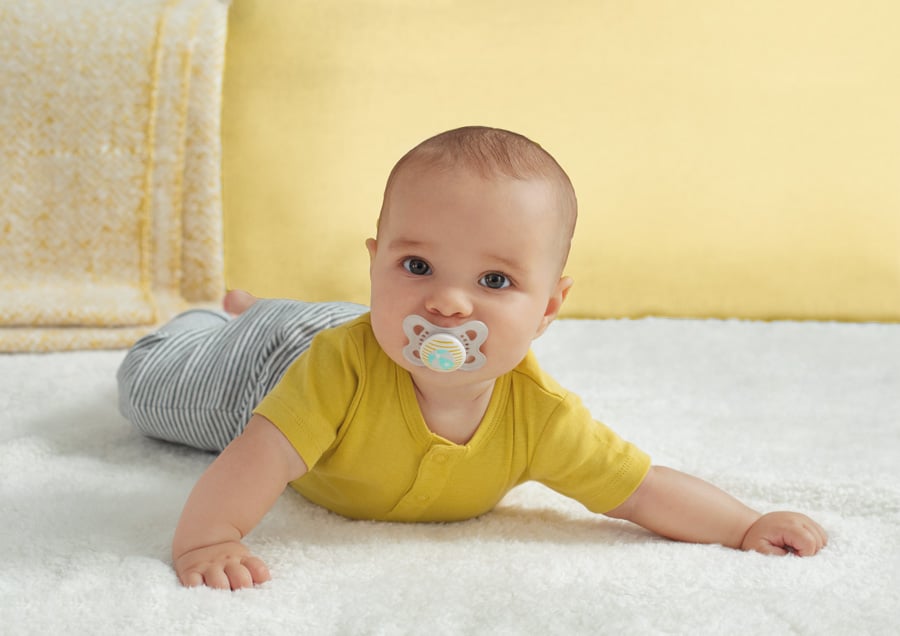 Dr Jenik works alongside Dr Nestor Vain, who contributed to the design and discussion of the study. Dr Peter Weiss MSc, PhD, CChem, FRSC, MRSH (now deceased) was Dr Jenik´s mentor in regards pacifiers. Dr Weiss is considered to be one of the leading authorities on infant feeding and use of pacifiers, especially in relation to the clinical effects on babies and young children. Dr Weiss’s interest also included the possible effects of chemicals used in the production of baby products. All the colleagues belonging to the Department of Neonatology of the Hospital Italiano had a collaborative attitude towards this study, which allowed it to be recognised internationally.

Pacifiers and breastfeeding success
The real debate over pacifiers has been whether its use interferes with the establishment and duration of breastfeeding. Lactation consultants believe that use of pacifiers interferes with breastfeeding and significantly decreases duration of lactation, but Dr Jenik did not believe this to be the case. Evidence to the contrary includes a randomised controlled trial developed in Argentina. The objective was to evaluate whether the recommendation to offer a pacifier once lactation was well established reduced the prevalence or duration of lactation. The population included 1023 mothers highly motivated to breastfeed whose newborns regained birth weight by 15 days. Mothers were randomly assigned to one of two groups: offering a pacifier, and not a offering pacifier. The offering group received a package containing six silicone pacifiers, supplied by MAM Babyartikel Gesmbh (www.mambay.com/professionals) and not sold in Argentina. The study demonstrated that when mothers are determined to breastfeed for more than three months and they are successfully breastfeeding at two weeks, the advice to use or not to use a pacifier does not affect breastfeeding.

Baby Friendly Hospital Initiative
The ‘Ten Steps to Successful Breastfeeding’ declaration was established following a meeting between international health organisations to help governments support breastfeeding and published at a joint WHO/UNICEF Statement in 1989. Step 9 of the statement recommends total avoidance of artificial teats or pacifiers for breastfeeding infants. The declaration was mandatory at hospitals certified as ‘Baby Friendly Hospitals’ by UNICEF. When the ‘Ten Steps’ were developed in 1989, there was no epidemiological evidence showing that pacifier use was detrimental to breastfeeding. The first observational study which concluded that pacifiers are causally associated with weaning was published in The Lancet in 1993. The investigation regarding pacifier and breastfeeding continued. Whilst many observational studies have demonstrated a negative association between pacifier use and breastfeeding duration, observational studies cannot be used to determine whether the pacifier is the single cause of breastfeeding cessation or is simply a marker of breastfeeding difficulties.

Sudden unexpected infant death, including sudden infant death syndrome, is the leading cause of death in the developed world for infants aged one month to one year of age.

Results from four randomised controlled trials revealed no difference in breastfeeding outcomes at different types of pacifier interventions. The Jenik Study from Argentina (n=1021) and the Kramer study from Canada (n=281) were included in the Cochrane review.

The topic of step 9 has been updated (2018) according to evidence-based medicine guidelines:
“Counsel mothers on the use and risks of feeding bottles, teats and pacifiers”, a phrase which neither encourages nor condemns the use of pacifiers alongside breastfeeding. This modification is a paradigm shift that allows families to make informed decisions on the use or avoidance of pacifiers. 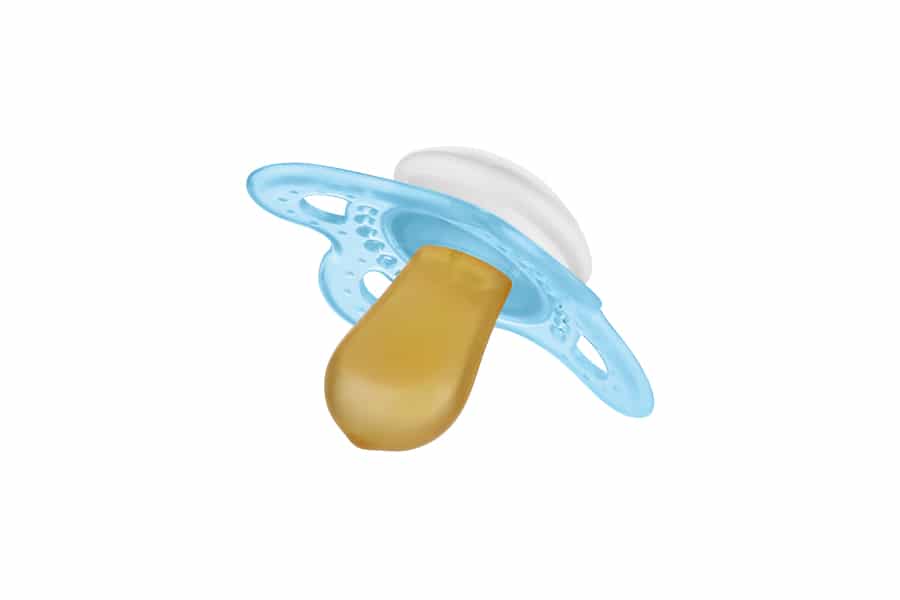 Pacifiers and Sudden Infant Death Syndrome
A landmark study carried out in 1993 first showed the connection between SIDS and pacifiers, specifically, the reduced risk of SIDS if a pacifier had been used. This was supported by eleven further case-control studies (which compare a treatment or intervention group with a group which have not received the treatment). These studies showed that risk of SIDS was reduced by approximately 50% if a pacifier was used. Additional meta-analyses, which analyse the results of multiple studies, also reached the same conclusion.

The reduced risk of SIDS appeared to be greater when pacifiers were used in infants with adverse sleep conditions, such as those who sleep prone or on their side, as well as those who co-sleep with a mother who smoked. Leading on from this, one study showed that the protective effect of pacifiers was mainly confined to those who shared a bed with parents or siblings. Interestingly, the use of a pacifier at the onset of sleep appeared protective, even if the pacifier falls out of the mouth after the infant falls asleep.

The way in which a pacifier can reduce the risk of SIDS is still unclear but there are numerous mechanisms proposed that contribute to the reduced risk. These include improved autonomic control and preventing the infant from rolling over into the prone position. They also help to maintain upper airway patency, increase blood pressure during sleep and induce a forward movement of the jaw which may facilitate breathing.

Conclusions of the Jenik group study
The results of Dr Jenik’s study showed that at three months, 85.8% of infants in the pacifier group and 86.2% of infants in the non-pacifier group were being exclusively breastfed. Furthermore, the recommendation to offer a pacifier did not produce a significant decrease in the frequency of exclusive breastfeeding, the prevalence of breastfeeding at any age, or the duration of lactation.

Mothers who are motivated to breastfeed their infants should be allowed to make their own decisions regarding pacifier use.

Although the use of pacifiers is not routinely included in government and health agency guidelines, the American Academy of Pediatrics recommend that it may be beneficial to consider offering a pacifier at naptime and bedtime, once breastfeeding is well established. This is part of their “Recommendations to Reduce the Risk of Sudden Infant Death Syndrome” document.

This study is therefore important as it encourages lactation consultants and international agencies to re-examine their staunch position on discouraging the use of pacifiers, due to adverse effect on breastfeeding. It paves the way for physicians, nurses and healthcare staff to continue supporting breastfeeding without needing to avoid the use of pacifiers; an intervention that has been clearly demonstrated to reduce the risk of SIDS.

The missing answers: When is it safe to introduce pacifier to the breastfed baby
Evidence is particularly lacking to guide advice regarding pacifier use in the earliest days for infants born at full term. The conclusions of a Cochrane study suggest that the introduction of pacifiers at 14 days or later has no detrimental effect on breastfeeding, but there is less evidence exploring the impact of pacifier use from birth. Studies on the risks and benefits of pacifiers are hampered by the issue of reverse causality. For example, does pacifier use have an adverse effect on breastfeeding, or it is a marker for breast feeding or weaning difficulties? It is this evidence gap that Dr Jenik hopes to fill.

More research is still needed to define whether pacifier use has any impact on early feeding and weaning. To begin to answer this question, Dr Jenik and colleagues plan to undertake another study to assess the impact of offering a pacifier on breastfeeding during these first days of life.

How are pacifiers protective in the sleep environment?
One recent study suggests that pacifiers lower the auditory arousal threshold. They may provide a mechanical barrier to rolling over into the prone position. Sucking on a pacifier keeps the tongue forward maintaining upper airway patency. An infant who is soothed by a pacifier may not move as often during sleep, thus limiting the chance of becoming covered by blankets. It has also been suggested that pacifier use could lead to slight carbon dioxide retention and increase the respiratory drive.

Do you think there are other, as yet unidentified, factors which link pacifier use and reduced risk of SIDS; for example, social or environmental influences?

<> The studies demonstrate a trend towards increased protection when pacifiers are used in an adverse sleeping environment, such as in a prone or side sleep position, sleeping with a mother who smoked, or sleeping on soft bedding. A recent study that sampled a large number of African American, low-income women found that 73% of mothers had received no advice from a physician related to pacifier use during sleep. 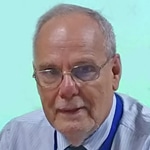 Dr Alejandro Jenik is a well-known neonatology specialist at the Hospital Italiano de Buenos Aires. He holds a leading role in SIDS research in Latin America. He has led workshops, conferences and worked on this topic with specialists throughout the world. He was the vice president of the International Conference on SIDS that took place in Montevideo in 2016.