Climate change affects the spatial distribution of commercially important tuna species in the tropical Pacific Ocean. Predicted shifts of tuna outside the jurisdictions of Pacific Island countries and territories could have a significant impact on the revenue they receive from tuna fishing, threatening their economic stability during climate change. Dr Johann Bell from Conservation International and the University of Wollongong, and colleagues Dr Inna Senina and Dr Sangaalofa Clark, describe the likely future impacts of various greenhouse gas emissions scenarios on tuna redistribution. Their analysis will inform a more equitable and efficient approach to managing the valuable tuna resources underpinning Pacific Island economies.

As greenhouse gas emissions continue to impact our planet, climate change could seriously affect fish populations in the coming decades. Climate-driven variations in sea-surface temperatures, ocean currents, oxygen levels, and prey availability influence the distribution of commercially important tuna species in the tropical Pacific Ocean, such as skipjack, yellowfin, and bigeye tuna. These tuna species are projected to move progressively eastwards, and to higher latitudes to some extent.

Fishing for tuna is vital to the economies of many Pacific Small Island Developing States (SIDS), but especially for the ten SIDS that are considered to be tuna-dependent. More than 95% of tuna purse-seine fishing in the Pacific Island region occurs within their combined exclusive economic zones (EEZs), and an average of 37% of their government revenue comes from access fees paid by industrial fishing fleets (Figure 1). Climate-driven shifts in tuna distribution will result in a significant decrease in tuna catch from the EEZs of these Pacific SIDS, severely impacting their economies. Their loss of government revenue due to tuna redistribution is a serious climate-justice issue for Pacific SIDS; they contribute negligible amounts to global emissions but face a disproportionate financial impact.

A team led by Dr Johann Bell from Conservation International, including Dr Inna Senina and Dr Sangaalofa Clark, used modelling to simulate changes in tuna biomass in the EEZs of the ten Pacific SIDS and the high seas to evaluate the impacts on island economies. The modelling was designed to assess the potential implications for tuna biomass and purse-seine catches within the combined EEZs, and estimate future changes in government revenue. The findings from the multi-disciplinary research were used to identify the actions needed to enable tuna-dependent economies to retain the benefits they currently receive from tuna.

By 2050, tuna biomass is projected to decrease by 13% in the combined waters of Pacific SIDS.

The ecosystem modelling provides enough information to confirm that tuna biomass will shift substantially from the combined EEZs under continued high emissions, with significant economic implications for the ten Pacific SIDS.

Tuna-dependent economies
The implications for economies arise because changes in tuna biomass are expected to affect purse-seine catches. Under the high emissions scenario, by 2050, the purse-seine catch from the combined EEZs of Pacific SIDS is estimated to decrease by an average of 20%, which represents 284,000 tonnes of tuna. In contrast, in the EPO-C, the catch is estimated to increase by an average of 27%, or 125,000 tonnes of tuna. These changes could reduce total earnings from access fees by an average of $90 million per year for Pacific SIDS, and reduce annual total government revenue for individual SIDS by up to 13%.

Since most of the catch from purse-seine fishing within the Pacific Island region occurs within the combined EEZs of Pacific SIDS, they currently command high access fees. However, as the tuna are redistributed to the east from the EEZs, both the demand by foreign fleets to fish for tuna in the waters of Pacific SIDS, and the rate they are prepared to pay to fish there, are expected to decrease. In the years ahead, a greater portion of the tuna catch from the waters of several SIDS will be needed for local consumption, further reducing the quantity of tuna available to earn revenue and support employment.

Fisheries management
Nine Pacific SIDS, of which eight are the Parties to the Nauru Agreement (PNA), have a collaborative system, known as the Vessel Day Scheme (VDS), for managing the purse-seine fishery. The VDS is administered by the PNA Office, under the direction of Dr Sangaalofa Clark as CEO, and limits the total annual purse-seine fishing effort within the combined EEZs of PNA members to around 45,000 fishing days, allocated to members based on their fishing effort history and the size of their EEZs. However, members are able to trade days to adapt to climate effects. For example, during La Niña episodes, when strong south-east trade winds push warm surface waters westward and relocate the prime purse-seine fishing grounds further west, the fleets follow the fish and buy days from PNA members located in the east. The reverse happens during El Niño events when the best fishing is further east.

As a result, annual variation in earnings from fishing access fees by PNA members is reduced, helping to stabilise revenue in tuna-dependent economies. In addition, the VDS helps maintain tuna resources, with the healthy status of stocks in this region attributed to the sustainable fisheries-management practices implemented by PNA members, the Pacific Islands Forum Fisheries Agency, and the Western and Central Pacific Fisheries Commission (WCPFC).

However, as the fish move from EEZs to the high seas, sustaining tuna resources will be challenging because it is more difficult to monitor and control illegal, unreported, and unregulated fishing there. Increasingly, WCPFC will need to implement tighter fishing controls in the high seas of the western and central Pacific Ocean outside the jurisdiction of PNA.

Proposed solutions
It is clear from the estimated losses in government revenue stemming from tuna redistribution that action must be taken to sustain tuna-dependent Pacific Island economies and ensure climate justice. The most important pathway for achieving this is to reduce greenhouse gas emissions to limit the rise in global temperature to 1.5oC. By achieving the goals of the Paris Agreement, the potential impacts of climate change on tuna-dependent economies are expected to be greatly reduced.

However, should these goals fail to be met, a regional approach will also be required. Negotiation through the Convention on the Conservation and Management of Highly Migratory Fish Stocks in the Western and Central Pacific Ocean (WCPF Convention) is a promising pathway for Pacific SIDS to retain their current economic benefits from tuna, regardless of climate-driven redistribution of the fish. The conservation and management measures of the WCPF Convention provide a framework for considering the special requirements of Pacific SIDS without placing a disproportionate responsibility for conservation on SIDS.

By achieving the goals of the Paris Agreement, the potential impacts of climate change on tuna-dependent economies can be reduced.

The negotiations should also recognise the injustice of climate-driven tuna redistribution and identify a mechanism for granting more responsibility to Pacific SIDS for managing tuna in the high-seas areas of the western and central Pacific Ocean. Such outcomes would significantly reduce the impacts of climate-driven redistribution of tuna and allow tuna-dependent Pacific SIDS to maintain economic stability.

Future applications
Further work is needed to reduce uncertainty in the timing and extent of tuna redistribution. Reducing this uncertainty will depend on improving the resolution of ecosystem modelling, incorporating all potential emissions scenarios and integrating additional biogeochemical models into the simulation. Identifying the stock structure of each tuna species is also expected to help reduce uncertainty by allowing the response of each tuna stock to climate change to be modelled separately. A clearer picture of the total change in tuna biomass from EEZs to high-seas areas can then be assembled from the redistributions of each stock.

Bioeconomic modelling will also be needed to reduce the uncertainty in future purse-seine catch and its contribution to tuna-dependent economies. Such modelling should explore how various emissions scenarios affect catch rates and government revenue derived from access fees. It should also examine the extent to which proposed fisheries management strategies empower Pacific SIDS to maintain control over their historic levels of purse-seine catch.

The results of the proposed research will enable tuna-dependent Pacific SIDS to better negotiate for the international agreements necessary to sustain their economies. They will also provide the information required by the WCPFC and Inter-American Tropical Tuna Commission – the regional fisheries management organisation for the eastern Pacific Ocean – to harmonise the conservation and management measures needed to minimise the impact that climate change has on the sustainability of tuna resources.

Do you think some Pacific SIDS will be impacted more than others under the projected scenarios?

Yes. We know that tuna purse-seine catch rates in different parts of the tropical Pacific Ocean are linked to spatial variation in, for example, ocean currents, oxygen levels, and nutrient supply among locations. Our modelling also indicates that, under a high emissions scenario, the suitability of environmental conditions for tuna will deteriorate at varying rates among EEZs in the decades ahead. However, Pacific SIDS will always need to manage their tuna resources co-operatively, regardless of the impacts of climate change on catches in their individual EEZs. They will need to negotiate as a block to achieve climate justice for the region. 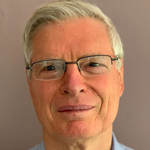 Johann Bell, PhD, led the first assessment of the vulnerability of fisheries to climate change in the Pacific Island region, completed in 2011. He used this experience to lead the research as Senior Director – Tuna Fisheries, with Conservation International. Johann is also an Honorary Professor at the University of Wollongong.

Inna Senina, PhD, has 20 years experience in modelling spatio-temporal dynamics of biological populations, focusing on quantitative models based on mechanistic descriptions of animal movement. Inna used her predictive ecological models to assess the impacts of climate change on tuna through her affiliations with CLS, France, and the Pacific Community. 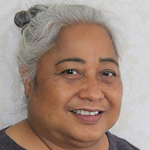 Sangaalofa Clark, PhD, is the CEO of the Parties to the Nauru Agreement (PNA) Office. The core business of the Office is operation of the PNA Vessel Day Scheme, which has sustained tuna catches and enabled Pacific Island countries to substantially increase the economic benefits they receive from tuna fishing.