Physical Sciences
The Standard Model of particle physics may represent our most advanced understanding yet of the universe’s fundamental building blocks, but many physicists believe it is incomplete. One of the most enticing prospects for updating the model lies with ‘neutrino-less double beta decay’ – a process which has been theorised for many decades, but has yet to be observed. Professor Francesco Cappuzzello at University of Catania and Dr Clementina Agodi at National Institute for Nuclear Physics (Laboratori Nazionali del Sud) are the lead researchers of the NUMEN Project. Representing the efforts of a global team of physicists, they ultimately aim to unveil the key nuclear aspects of neutrino-less double beta decay for the first time.

Beta decay is one of the most well-understood processes in subatomic physics. It occurs when an atomic nucleus is composed of particular arrangements of protons and neutrons which make it unstable, causing it to either release a beta particle (an electron) from one of its neutrons, turning it into a proton, or an anti-beta particle (a positron) from one of its protons, transforming it into a neutron. In some very rare cases, double beta decay can occur, where two neutrons will simultaneously transform into protons, or vice versa, releasing either two positrons or two electrons. 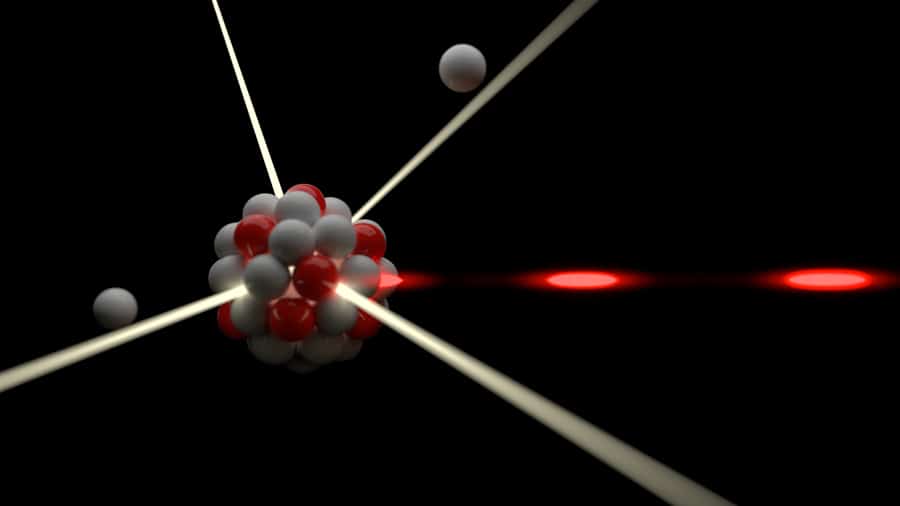 In our current understanding of particle physics, defined by a set of rules called the Standard Model, there are several fundamental values which need to be conserved in every process, one of which is the ‘lepton number’. Leptons are a family of fundamental particles which include positrons and electrons, along with chargeless and extremely light particles, named neutrinos. Since electrons are ‘matter’ and positrons, ‘antimatter’, the Standard Model dictates that during beta decay, they must be released alongside either an anti-neutrino or a neutrino, respectively.

However, another type of beta decay has been predicted theoretically where this is not necessarily the case. In ‘neutrino-less double beta’ (0νββ) decay, two beta particles are emitted, but no neutrinos. On the surface, this process would appear to violate lepton number conservation, but for several decades, physicists have had reason to believe it may still be possible. Therefore, observing the process experimentally would have profound consequences for our current understanding of fundamental physics.

Breaking the standard model
In 1937, Italian physicist Ettore Majorana made an intriguing proposal: that it could be possible for some particles to be their own antiparticles. We know for a fact that this can’t be the case for a majority of fundamental particles, since one particle cannot have both positive and negative charges, for example. However, based on our currently-limited understanding of neutrinos, the possibility remains that they could be so-called ‘Majorana particles’.

Since 0νββ-decay emits no neutrinos, its observation would confirm for the first time that elementary Majorana particles can exist. “0νββ-decay is potentially the best resource to probe if neutrinos are their own antiparticles, as predicted by Majorana, and to extract their effective masses,” explains Professor Cappuzzello. “Moreover, if observed, 0νββ-decay will signal that the exact balance between matter and antimatter can be violated in nature.”

This disparity in the enormous amount of matter compared with antimatter in the universe is currently one of the biggest problems faced by physicists. The direct confirmation that 0νββ-decay can occur would, therefore, be a big deal for particle physics, nuclear physics and cosmology; potentially giving researchers the tools they need to re-draw the Standard Model to more accurately describe the fundamental constants of the universe.

If observed, 0νββ-decay will signal that the exact balance between matter and antimatter can be violated in nature.

“Presently, this physics case is among the most important research into ‘beyond the Standard Model of Particle Physics’,” Professor Cappuzzello continues. “It might guide the way toward a Grand Unified Theory of fundamental forces (electromagnetic, weak and strong interactions) and unveil the source of matter-antimatter asymmetry observed in the Universe.”

The race for 0νββ detection
Shaking up our understanding of the most fundamental building blocks of the universe is, understandably, an enticing prospect for physicists. As Dr Agodi describes, this has meant that the hunt for 0νββ-decay has ramped up in recent years. “Despite the fact that the process has never been observed, there is a kind of worldwide race, involving large scientific collaborations and international laboratories in the fields of neutrinos, nuclear and particle physics, in order to detect it,” she says.

Theoretical physicists have proposed a variety of methods to infer the extremely long decay time for 0νββ process (more than 1016 times longer than the life of universe), stemming from the rules which must be obeyed by atomic nuclei in all double-beta decay (ββ) processes. “Since the ββ-decay process involves transitions in atomic nuclei, nuclear structure issues must be also accounted for, in order to describe it,” Professor Cappuzzello continues. “In particular, the key quantities are the so-called Nuclear Matrix Element (NME), which express the probability that the parent nucleus can spontaneously convert into a daughter nucleus, as result of ββ-decay.”

Based on state-of-the-art theoretical calculations, physicists in worldwide studies are now aiming to evaluate the NMEs which control the 0νββ-decay time specifically. However, since it would be incredibly difficult to detect the process occurring directly, these calculations are faced with significant challenges in providing the meticulous levels of precision which physicists require in their experiments.

“Despite the tremendous efforts and improvements achieved by nuclear structure studies, the ambiguities in the present models are still too large to provide NMEs with the necessary accuracy,” says Dr Agodi. In their research, Professor Cappuzzello, Dr Agodi and their colleagues are aiming to realise this level of accuracy for the first time, with the help of cutting-edge facilities based at the INFN Laboratori Nazionali del Sud in Catania.

Observing a close analogy
ββ-decays are not the only processes in physics where two charges are exchanged simultaneously. As Professor Cappuzzello explains, other ‘Double Charge Exchange’ (DCE) processes would be far easier to observe directly than 0νββ-decay. “In this scenario, the experimental study of DCE reactions, which are processes promoting analogous nuclear transitions as ββ-decay, could provide important information,” he says. “The advantage is that DCEs can be studied under controlled laboratory conditions.”

Professor Cappuzzello and Dr Agodi’s team take advantage of the fact that the processes underlying 0νββ-decay are comparable with those governing easier-to-observe DCE reactions. Therefore, the physicists suggest that 0νββ-decay NMEs could be inferred by observing DCEs occurring in one particular controllable environment: collisions between heavy, fast-moving ions.

The team have attempted to do just this in previous studies. So far, however, their efforts have been hindered by the tiny probabilities by which the products of their heavy ion collisions were scattered – a value named the collision ‘cross-section’. With such imperceptible cross-sections, it has been incredibly hard for the physicists to know where to look for the collision products, where DCEs are occurring. But since these setbacks, new upgrades have been made to the INFN-LNS facility of Catania, owned by Italy’s National Institute for Nuclear Physics, which could make their task far easier.

With the new equipment, Professor Cappuzzello and Dr Agodi’s team now hope to make cross-section measurements of heavy ion collisions far more easily. “Recently, we established an innovative experimental approach at the INFN-LNS laboratory in Catania, which allows us to largely overcome such experimental challenges, and consequently, to extract quantitative information on NMEs from DCE reactions,” recounts Professor Cappuzzello.

NUMEN is a challenging project at the intersection of nuclear and neutrino physics, driven by an important physics case.

Introducing: The NUMEN Project
In 2014, Professor Cappuzzello, Dr Agodi and their colleagues unveiled their plans for the ‘NUclear Matrix Elements for Neutrino-less double beta decay’ (NUMEN) Project. “The aim of NUMEN is to investigate the nuclear response to DCE reactions for all the isotopes explored by present and future studies of 0νββ-decay,” says Dr Agodi. “Several aspects of the project require the development of innovative techniques, for both experiment set-up and theoretical interpretation of the collected data.”

At the heart of the new capabilities of the NUMEN Project are two, state-of-the-art installations at the INFN LNS laboratory Catania. The first piece of equipment is named the K800 Superconducting Cyclotron – a particle accelerator capable of accelerating heavy ions to high speeds, while ensuring precise, head-on collisions between ions. Secondly, the MAGNEX spectrometer will analyse the products of these collisions to incredibly high degrees of precision. “While K800 accelerates the heavy-ion beams with the required high resolution and low emittance, MAGNEX detects the reaction products with large acceptance and high resolution in mass, energy and angle,” Professor Cappuzzello explains.

With the help of these facilities, along with new cutting-edge theoretical calculations which have been developed in view of the NUMEN results, the researchers soon hope to embark on the most extensive search for 0νββ NMEs ever undertaken. “The INFN-LNS facility is today unique for this research in worldwide context, and will likely be in view of a major upgrade of the whole research infrastructure, which is going to start in the coming months,” says Professor Cappuzzello.

A promising future
The NUMEN Project represents the coming together of minds encompassing a diverse range of fields in physics. As Professor Cappuzzello and Dr Agodi conclude, the researchers at NUMEN believe this is exactly what is needed to make a major new discovery. “NUMEN is a challenging project at the intersection of nuclear and neutrino physics, driven by an important physics case and opening interesting scientific scenarios and potential technological fallout,” they say.

In the coming years, the researchers involved with the project look set to be at the forefront of the global race to unveil 0νββ-decay experimentally, and provide the first clear evidence for the existence of Majorana particles. If they are successful, a long-awaited shakeup to the Standard Model could finally be realised, allowing for an unprecedented opportunity to explore the most fundamental building blocks of the universe.

The NUMEN Project is a truly global collaboration. Can you give us a bit of the history behind how this collaboration was formed? 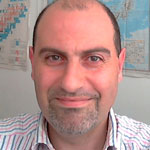 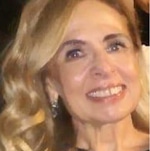 Clementina Agodi is an experimental nuclear physicist working in the field of reactions and structure of atomic nuclei. She holds a degree in Physics from Catania University and is currently senior researcher at INFN Laboratori Nazionali del Sud. In 2007–2015 she was member of Nuclear Physics board of INFN. Dr Agodi is Spokesperson of NUMEN Project.

The NUclear Matrix Elements for Neutrino-less ‘double beta decay’ (NUMEN) Project is an innovative project based at the INFN-Laboratori Nazionali del Sud. Using cutting edge technology, it aims to enhance our knowledge and understanding of fundamental physics.