The seas of science are unrelenting: researchers have spent lifetimes trying to attain the unattainable – and fallen overboard into obscurity when they were unsuccessful. In the disciplines of Quantum Field Theory and Materials Science, the ability to create light emitting devices from silicon has long been seen as a perpetual white whale. But, as Professor Motoichi Ohtsu, of Research Origin for Dressed Photon (Japan) has demonstrated, anything can be achieved if you choose the right tools. In his case, an exotic particle known as the Dressed Photon is exactly what was needed to conquer the unconquerable.

Back in 1981, when the first CDs were released, scientists had inadvertently spawned an audio revolution. Digital audio had already been around for about a decade at that point, but it was now possible to play it from a storage device which could be held in the hand. Records and audio cassettes were relegated to the dusty cupboards of history or the pristine shelves of connoisseur collectors. In the mid-90s, a similar thing happened with video: VHS gave way to DVD and we could now squeeze around four times the data that a record could hold onto a disk taking up less than 16% of the area. In 2004, when the first ever Blu-ray was released, the quality of our home entertainment catalogues rocketed, with a whopping 25GB of data now easily stored on that same small disk – that’s 60 times the data that a record can contain. Have you ever wondered what was behind these leaps and bounds in home entertainment?

In this particular case, advances in laser technology are what made the difference. Data is etched onto such devices using lasers – and read in the same way. The size that one bit of data takes up on a CD, DVD or Blu-ray depends on one thing only: the wavelength of light used to read and write it. For CDs, a 780 nanometre (nm) laser was used (that’s a laser that produces light with a wavelength of 780 thousand-millionths of a metre!). DVDs and Blu-rays used 680nm and 405nm laser light respectively. So why don’t they just create a laser with a wavelength of 1nm and be done with it?

The Dressed Photon has a lot of unique features which have never been described by the conventional quantum field theories.

Well, when it comes to light emitting diodes (LEDs) and lasers, scientists have long been struggling with the same problem: the wavelength of light emitted by a device is intrinsically linked to the underlying atomic structure of the materials used. In other words, scientists can’t just decide which wavelengths they want to produce: they have to find materials, or engineer specific combinations of materials, that will give the results they are looking for. That’s why advances in this technology come in apparent sporadic leaps and jumps.

Professor Motoichi Ohtsu, of Research Origin for Dressed Photon (Japan), has been able to make another leap forward in this field by creating the first high powered Silicon (Si) LED and laser devices. He has achieved this by exploiting the peculiarities of the recently discovered Dressed Photon.

The Dressed Photon
To understand what a Dressed Photon is, you first have to understand that the physical world is largely made up of tiny building blocks of matter and energy. Atoms are the most widely known about, but they too have their own constituent parts: neutrons, electrons and protons to name a few; and then there are their more exotic cousins such as quarks, muons, pions and bosons (amongst others). You might even have heard of the famous Higgs Boson, the so-called God particle, whose existence was finally proven at CERN in 2012. The fact is that our universe, which is bigger than we can possibly imagine, is absolutely teeming with tiny particles that are so small we can’t even see them. A photon is simply a particle of light (when light chooses to behave like a particle, that is).

Particles, of all shapes and sizes, interact with their environment in very specific ways. For example, photons can – and do – knock electrons out of their orbits on the outskirts of atoms – but only for a limited time: the ousted electron usually returns to send the photon off with a swift kick and a burst of light. Scientists call this process excitation and emission. It is a phenomenon that has been exploited throughout science to produce many of the technological wonders we currently take for granted. How a particle interacts with its surroundings can usually be described in very precise, reliable ways.

Sometimes, though, particles behave unexpectedly: they appear to break the laws of conventional physics, having more influence on their surroundings than their size, or other measurable qualities, indicates they should. Scientists call these Dressed Particles and as Professor Ohtsu has demonstrated by exploiting a particularly special case, the Dressed Photon, they are beginning to lead us in completely new directions.

Off-shell science: scouting the hinterlands of Quantum Field Theory
Physics can be divided into many different areas – classical physics, relativistic physics, quantum physics (to name a few) – and one of the great problems of our time is that these areas don’t always play nicely with each other. Quantum Field Theory (QFT) was developed to try and bridge the gap between classical field theory, special relativity, and quantum mechanics and is used to represent the world of sub-atomic particles.

In QFT, when a particle obeys a set of equations from classical physics, we say that it is an example of on-shell science. The terminology comes from the fact that these specific equations relate to the particle’s energy, momentum and what physicists like to call its mass-shell (but which can be thought of as plain old mass for our purposes). When a particle doesn’t obey these equations of motion, it is an example of off-shell science—an area of physics we still have much to learn about. ‘The Dressed Photon has a lot of unique features which have never been described by the conventional quantum field theories that treat only the phenomena of on-shell science,’ explains Professor Ohtsu.

Off-shell science is an extremely fertile area of physics and nobody really knows what secrets it might unlock in the future. Back in the year 1960 when a couple of unassuming physicists built the first laser, it didn’t really have a purpose. Today, as we have already seen, it is at the heart of our home entertainment systems and so much more: laser technology is central to our current push towards nuclear fusion which will unlock an essentially limitless energy supply. If achieved, it will change the course of history forever.

High-powered LEDs and lasers using silicon crystals
Professor Ohtsu has used this fertile area of science to develop the world’s first high-powered LEDs and lasers from silicon crystals. This is important because, after oxygen, silicon is the most abundant material in the Earth’s crust: for more than half a century it has been the primary material used in electronics and, as a result, a worldwide infrastructure is already in place for creating silicon-based devices. In other words, it would be extremely cost effective to develop light emitting devices based on silicon. On the other hand, silicon is widely believed to have a low light emitting efficiency and, as a result, is thought of as an extremely difficult material to work with when creating light emitting devices. Rather than be put off by such a seemingly unattainable challenge, scientists around the world have set it as their target – intent on catching the white whale of materials science.

To create his devices, Professor Ohtsu has not engineered a new combination of materials to achieve the light emitting devices required but developed a new method for engineering them. His new approach, which he calls Dressed Photon-Phonon Assisted Annealing is a nano-fabrication technique which uses off-shell science to produce light emitting materials in a novel way. Using a technique called Joule-heating, and flooding the material with light during the process, he is able to lock-in specific wavelengths in a way that has never been seen before. ‘The unique feature of the fabricated device is that the wavelength of the emitted light is equivalent to that of the light irradiated during the annealing,’ explains Professor Ohtsu. ‘This surprising feature is named the “Photon Breeding”, which has never been observed in conventional LED and laser devices.’

In one process, Professor Ohtsu has simultaneously achieved the apparently unachievable and unlocked new information.

In one process, Professor Ohtsu has simultaneously achieved the apparently unachievable and unlocked new information about the world that we live in. Not only will his devices be extremely useful in many aspects of science and technology, but the surprising new science he has uncovered provides a new direction for researchers to head in their efforts to understand the unknown. Chipping away at the vast wall of the undefined and filling the small cracks with knowledge and understanding is how science progresses. Who knows what else might be uncovered by shining the light that Professor Ohtsu has created with his research?

Your work takes place in an extremely multidisciplinary area, simultaneously uncovering new phenomena in science and having practical uses in technologies around the world – which do you find most interesting?
It is most interesting to draw a precise physical picture of a dressed photon. Also, from the technical point of view, it is essential to investigate the mechanism of fabricating and operating Si-LEDs and Si-lasers.

Industry-academia collaboration is nothing more than a by-product of basic research.

The Dressed Photon: Shining light on the unknown using the unconventional area of off-shell science was last modified: May 28th, 2019 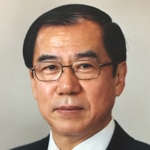 Motoichi Ohtsu was awarded his Dr. Eng. from the Tokyo Institute of Technology where he went on to become an Associate Professor and Professor. Later, he became Professor at the University of Tokyo. He is now Professor Emeritus at both the University of Tokyo and the Tokyo Institute of Technology. Professor Ohtsu is also Director-in-chief of research institute, the “Research Origin for Dressed Photon”. Professor Ohtsu has published 560 papers and 80 books. He has received 87 patents and been awarded 20 prizes.