Earth & Environment
Climate change is real, is here, and it will not go away unless we do something. Based on current scientific advancements on energy systems, energy storage, renewable energy options, and understanding of the Earth’s feedback mechanism, there is hope that global efforts could help avoid an environmental catastrophe. However, the action plan needs to be global, based on collective approaches, and implementing state-of-the-art science. Professor Michael Düren from the Center for international Development and Environmental Research in Germany shares his thoughts on the bigger energy picture and proposes actionable approaches towards overcoming the most important challenge of our life.

When asked about the most important numbers in their life, many people might think about bank account balance, number of children, PINs, maybe even body measurements. Not many will think of the number which can affect us all in ways that we have heard of, maybe partially experienced, but we most certainly do not want to think about too much. This number is the agreed maximum temperature rise – a mere 2oC – the Earth can afford before tipping the scale towards tremendous changes in life as we know it. With our attention being on the hottest and most current topic of all, we elaborate on scientific advancements towards understanding how the Earth responds to climate change, sustainability within the energy sector, and ways that can help delay, or even prevent, catastrophic events.

Climate change and feedback mechanism
There is an at least vague awareness of what climate change means, its main causes, and what needs to be done to combat it. However, not many people are aware that the Earth has a feedback mechanism, perceiving changes and responding to them instead of ‘passively’ accepting our lifestyle choices. This mechanism shows a response pattern, with a sharp temperature increase, followed by a less sharp temperature decrease back to the initial level. A known trigger for such a response is the change of solar radiation, and the peak pattern is attributed to complex internal mechanisms of the Earth system. One could argue that the Earth system is like a sleeping tiger (base temperature level), which suddenly wakes up (sudden temperature increase) due to a trigger, and then it cannot fall back to sleep for a long time (slow decrease).

Although it seems that eventually the tiger goes back to sleep (after typically 50,000 years), we need to be careful of the triggers, as we cannot control solar radiation, but we potentially control other triggers such as greenhouse gas emissions, fossil fuel usage, and land use. Explaining the potential disaster of climate change using the tiger analogy, so far (during the last 800,000 years) after each warm, interglacial period the tiger was able to eventually go back to sleep, whereas with anthropogenic triggers we might end up changing the sleeping pattern for the worse. This means that the feedback mechanism can adjust only so much before not being able to stick to the known pattern. Besides temperature rise, indications that the Earth’s feedback mechanism is close to giving up on absorbing our choices, are droughts and water scarcity, big population counts not having access to food and medication, the very real possibility of pandemics, and migration of populations from ‘well-used’ areas to areas which are still able to ‘give’.

The Earth has a feedback mechanism, perceiving changes and responding to them instead of ‘passively’ accepting our lifestyle choices.

A new energy system
Usually, proposals on how to combat climate change are not being viewed under a global perspective free of political implications, or combined with other, ostensibly unrelated, tangibles of the same problem. For example, there is a tremendous amount of research on topics around water, energy, and carbon, but that knowledge is not often combined to produce a coherent plan, in a similar way that these three elements are seamlessly combined in the environment. The current energy system towards production of energy to meet anthropogenic demands is unsustainable, as it uses extreme amounts of carbon and water, deranging the natural cycles. Hence, a novel, sustainable energy system should be developed in order to meet our energy demands.

Pivotal towards the development of global, sustainable concepts based on information collected from various different sectors is the work of Professor Michael Düren from the Justus Liebig University in Giessen, Germany. Michael Düren is a particle physicist, and current Professor of experimental physics, who is also member of the executive board of the Center for international Development and Environmental Research in Giessen and member of the energy group at the German Physical Society. He co-founded the DESERTEC foundation in 2008, an initiative developed by scientists, politicians and economists, aiming to develop a sustainable future. Recently, Prof Düren authored a book on the bigger picture of energy, explaining the Earth’s feedback mechanism, focusing on renewable energy solutions towards a necessary energy transition, and proposing concepts that should be implemented on an international level, towards solving the energy problem and creating a peaceful future of the global community.

Energy demand and consumption varying in different parts of the world is not new, but the difference can be within an order of magnitude. Energy transport can be very costly, especially when accounting for power losses. Investing in a high-voltage direct current (HVDC) power grid which could combine electricity supplied from various sources can help, as well as having an additional chemical energy carrier. Making the HVDC power grid international would be a great step towards a global effort to energy transition, as countries which produce less electricity could benefit from countries where abundant renewable energy resources make energy production inexpensive. Furthermore, investing in efficiency plans about energy production, transport and consumption could make a big difference in energy associated metrics per sector, season, and country.

Moving to a sustainable future does not only mean moving forward, but also cleaning up the existing mess.

After production, consumption, and transport, the next key issue is energy storage, which might be either efficient but expensive, or less expensive but not as efficient. Instead of excluding energy storage options as ‘overall not good enough’, we should focus on identifying the best option combination from both categories, aiming for short-term and long-term storage, in an effort to cover the year-round energy requirements.

Renewable energy: what, how, who
Towards a more sustainable future, the energy sector should stop relying so heavily on fossil fuels and instead explore the untapped potential of renewable energy. There are several forms of trustworthy renewable energy options, such as exploiting solar power, wind power, the power of oceans, and geothermal power. Furthermore, there are mature technologies which could be easily populated in selected locations, according to their key strengths. For example, solar power could be harvested from a sunny desert, whereas wind power could be produced in the wind belts of our planet. Under the umbrella of renewable energy and sustainability, Prof Düren’s book also discusses the available options for maintaining the availability of fresh water supplies. He gives insight and examples with a futuristic approach on water collection and storage, ways to save and recycle water, how to ‘make’ water from humidity, and the art of desalination.

Black carbon sequestration is the new black
Within the proposed global approach for energy transition towards a sustainable future in order to tackle climate change, carbon sequestration could not be missing from the picture. The point of moving to a sustainable future does not only mean moving forward, but also cleaning up the existing mess. A great example is to reduce the levels of carbon dioxide present in the atmosphere. This could be achieved through reforestation, use of organic construction materials, and black carbon sequestration. Shedding light into the latter, Prof Düren explains that the concept of black carbon sequestration could replace the existing efforts for carbon sequestration and storage, as in contrast to carbon dioxide, black carbon does not pose any deadly side effects. This method is based on pyrolysis, basically burning carbon-baring substances in absence of oxygen, and results in charcoal, which is a safe form of carbon storage, and syngas, which can be further used to produce hydrogen, or alternative fuels. In this way, even plastic can be transformed to products helpful for the environment and further human use.

A much-needed energy transition
With the Earth’s feedback mechanism being on the verge of not providing feedback positive for life as we know it, energy transition is necessary. And with our current technologies, it can be done! However, alongside energy transition we need to master mindset transition: Prof Düren’s action plan requires countries and continents to put their political interests aside, and individuals to disregard their financial interests, and join forces to fight for keeping the tiger’s sleeping plan in check.

What would be a realistic timeline for complete energy transition to renewable sources, given political implications allow it?

<>What is a realistic timeline when a tiger wakes up and follows your path? How much will you accelerate your pace? Mankind was always able to cope with extraordinary challenges. The Apollo programme took eight years to bring a man to the moon. With the technology of the 1960s, this was certainly not a realistic timeline. The energy transition is the easy part of climate change. More difficult will be the restauration of our biosphere and the reduction of the existing CO2 in the atmosphere. There is no guarantee that we will make it in time.

How can political implications and financial capitalism be set aside for an agreement on energy transition to be reached?

We can currently observe a sell-out of our natural resources, our biodiversity and our environment. Even science and truth are bargained. All that are natural consequences of our ill-designed global economic system. We need planetary thinking: economists that design a sustainable economy, politicians that stand for the benefit of the people and a young generation that refuses stupid consumerism. And of course, we need birth control. 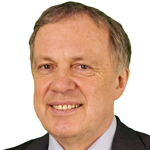 Michael Düren (*1957) is a particle physicist and professor for experimental physics at the Justus Liebig University (JLU) in Giessen, Germany. He is member of the executive board of the Center for international Development and Environmental Research (ZEU) in Giessen und member of the energy group at the German Physical Society (DPG). He co-founded the DESERTEC foundation in 2008.

In his book, Prof Düren develops a concept for a renewable energy system based on technology that is readily available today and international cooperation.

Prof Düren thanks his late colleague
Dr Gerhard Knies, who invented “DESERTEC”, for many years of fruitful cooperation, his colleagues from the working group “energy” of the German Physical Society for innumerous pieces of background information and discussions, especially Prof Dr Gerhard Luther,
Prof Dr Christian-Dietrich Schönwiese and Prof Dr Hartwig Spitzer, and his friends at the DESERTEC Foundation, Dii, DLR and ZEU.