Business & Economics
What role do values play in knowledge transfer between social enterprises, and what are the factors which facilitate or inhibit the exchange of innovative practice? Those are the questions behind new research by Imran Chowdhury of Wheaton College in Massachusetts, USA. Looking at social entrepreneurship through the lens of a partnership to transfer a model of affordable eye-care services from India to South America, his work has practical implications for programme managers, consultants, and professionals in different settings worldwide.

Imran Chowdhury, Associate Professor of Business & Management and the inaugural Diana Davis Spencer Chair of Social Entrepreneurship at Wheaton College in Massachusetts in the USA, conducts research at the intersection of business and society. His work covers topics such as social entrepreneurship, corporate social responsibility, philanthropy, and community-focused organisations.

Dr Chowdhury is particularly interested in organisations that pursue joint social and economic goals and use business strategies and methods to achieve social objectives. Distinct from corporates which use profits to pursue philanthropic goals, and non-profits which fund services by developing revenue streams, these models of social entrepreneurship are true ‘hybrid organisations’.

Dr Chowdhury’s latest work looks at what happens when hybrid organisations seek to transfer their models of social innovation to partners with different institutional logics, when the rationality for generating social impact varies between organisations in a partnership. The research is based on a longitudinal, qualitative field study of three social enterprises that formed a partnership to scale-up social innovation and adapt a model of affordable eye-care services developed in India to a clinic in Paraguay, South America.

Dr Chowdhury’s focus is on how organisations manage relationships and resolve conflicting demands emanating from their internal and external environments. In addition, his research examines the factors that influence knowledge transfer between partners in different settings, particularly the role that values play in such transfer.

Negotiating in good faith with partners may result in positive outcomes that both parties can live with.

Field study
Located in the city of Madurai in southern India, the Aravind Eye Hospital has more than 45 years’ experience in providing eye-care services to poor people, with the aim of eliminating needless blindness. In 2017/2018, the hospital recorded more than four million outpatient visits and performed nearly half a million surgeries. Half of these were delivered at no cost to the patient.

Founded in 1992, Fundación Visión is based in Paraguay’s capital Asuncion and leads blindness prevention in the country. It is the only institution that provides opthalmological outreach services in rural areas. Eye-care procedures can be expensive and to help patients fund the cost, Fundación Visión linked up with Fundación Paraguaya, a leading microfinance provider with a network of local offices and contacts in remote areas of the country.

To learn more about their programme, Dr Chowdhury conducted a series of semi-structured interviews with managers and staff from all three organisations. This was supplemented by extensive fieldwork, on-the-ground observation, and detailed examination of documents and publications related to the project.

Chronologies and logics
Analysis of the data gathered allowed Dr Chowdhury to identify key moments in the development of the partnership and code them according to how, as hybrid organisations, partners managed and aligned their social and economic logics.

The results showed the existence of multiple competing logics which reflected the partners’ institutional complexity. The most variation between partner organisations was at the level of social logics, which Dr Chowdhury further identified as either spiritual or social welfare logics. He explains: ‘Whereas the social welfare logic obtains legitimacy by making products and delivering services to address local social needs, the spiritual logic obtains legitimacy by linking the provision of social services and goods to an association with deities and faith as its fundamental guiding mechanism.’

Despite the partners’ different religious backgrounds, the fact that Aravind and Fundación Visión had a values-driven spiritual logic and shared an underlying commitment to a ‘higher power’ was an important point of unity and common purpose. This helped to facilitate collaboration between the two clinical systems and mitigate clashes when there was a mismatch of economic logics.

In contrast, decision-making in Fundación Paraguaya was informed by a social welfare logic which focused on the provision of products and services to address local social needs, but privileged those who ‘deserved’ support. In addition, a mismatch of economic logics between Fundación Paraguaya and Fundación Visión was exacerbated by the fact that there was a lack of alignment between the two organisations’ social logics.

It was vitally important that common ground was found between Fundación Paraguaya and Fundación Visión, because the microfinance organisation’s country-wide local network provided the clinic with access to a greater number of patients for its outreach eye-care services.

Theoretical background
Dr Chowdhury’s analysis of the study data suggests that how organisations respond to and manage conflicting demands can be a function of their ethical backgrounds and cultures. In this way it builds on the work of the American social psychologist Jonathan Haidt, who studies the psychology of morality. Dr Chowdhury comments: ‘The present study, by examining how varying social motivations (emerging from varied social logics) can manifest as tensions or conflicts in partnerships, builds on Haidt’s notions by providing a basis for developing mechanisms for resolving these organisational tensions as they emerge in practice.’

In addition, the findings demonstrate that in practice, the alignment of the partners’ organisational logics and values facilitated the way in which they were able to transfer knowledge about social innovation from a densely populated urban setting in India to dispersed, rural populations in Paraguay. The alignment of values helped to build trust which, in turn, enabled them to work together to find practical solutions to problems which arose. As Dr Chowdhury explains: ‘Negotiating in good faith with partners may result in positive outcomes that both parties can live with.’

Dr Chowdhury’s research also helps to advance current theory on social entrepreneurship, not least the concept of ‘bricolage’. Made famous by the French anthropologist Claude Lévi-Strauss in the 1960s, the ‘do-it-yourself’ approach to development and problem-solving is to fashion solutions from what is at hand, rather than what may be recommended as ideal.

Values alignment helps entrepreneurs to transfer social innovation to partners in distant settings, despite the barriers posed by geography, language, and culture.

Dr Chowdhury comments: ‘Evidence from the case study suggests that institutional bricolage – the crafting of improvised solutions in resource-constrained settings – can serve as a potent force in driving innovation transfer and the process of re-combining available resources may be facilitated by the extent to which the values between partner social enterprises are combined.’

It reveals the important role that values alignment plays in international management and helping entrepreneurs to transfer social innovation to partners in distant settings, despite the barriers posed by geography, language, and culture. It further defines the concept of ‘social’ in the practice of social enterprises who have either a spiritual or social welfare approach to their work and sheds light on faith and entrepreneurship and the importance of organisational belief.

The study has interesting implications in the wake of the global pandemic. Dr Chowdhury’s research illustrates the importance of partners modifying practice to fit the context in which they operate, particularly with regard to resources. He explains: ‘In a COVID-19 affected world, those constraints could well apply to the urban areas which have been hardest hit by the pandemic.’ In addition, the pandemic has shown how the universal acceptance of mask-wearing in countries such as Taiwan and South Korea – an alignment of values between individuals and the state – helped to inhibit the spread of infection, at least during the early stages of the COVID-19 outbreak.

Dr Chowdhury comments: ‘Focusing on values alignment may therefore be a means to overcome some of the resistance to measures such as vaccines and also help to rebuild trust in public health institutions and other organisations charged with preserving well-being.’

The study highlights the importance of values and institutional bricolage in social innovation transfer. What was the most interesting example of these that emerged within your research?

<>What stood out for me was how important values alignment was to fashioning solutions which facilitated the transfer of the social innovation in this study. The two focal organisations were in alignment at the level of values, both were hospitals guided by spiritual / religious principles at their core. This speaks to a larger issue in the way we consider social enterprises: while it is easy to group them under one umbrella, it is important to note that how such organisations seek to create social impact is often as important as the fact that they seek to create this social impact in the first place.

The role of values in social innovation transfer was last modified: September 24th, 2021 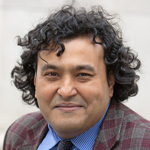 Imran Chowdhury, PhD, is the Diana Davis Spencer Chair of Social Entrepreneurship and Associate Professor of Business & Management at Wheaton College (MA) and Visiting Professor at the Free University of Berlin’s International Summer and Winter University. He teaches and conducts research at the intersection of business and society, encompassing domains such as social entrepreneurship, corporate social responsibility, philanthropy, and community-focused organisations.