Biology
Lady beetles are toxic to predators and display a colourful warning – the perfect example of aposematism. After tasting a bitter lady beetle, predators learn the colours to avoid in future. As a result, lady beetles of certain colour patterns are less likely to be eaten. Copying successful lady beetles helps to avoid predation. Professor Oldřich Nedvěd from the University of South Bohemia set out to investigate this phenomenon, known as Müllerian mimicry, in the central mountains of Iran and discovered a new species in the process.

Coccinellidae, more commonly known as lady beetles, ladybugs, or ladybirds, are a well-known family of beetles that are easy to recognise by their brightly coloured, dome-shaped bodies. Lady beetles can range in colour from cream to dark red and can have few or many black spots on their wing covers (also called elytra). There are over 6000 known species of lady beetle worldwide and there are hundreds of unique colour patterns. However, some species are polymorphic, which means individuals from the same species can have different colour patterns (also known as morphs). This is controlled by genetics and is similar to the control of eye colour or hair colour in humans.

Generally, lady beetles have a bright colour which acts a warning known as aposematism. This aposematic colouration signals to visual predators that lady beetles are protected by chemicals that make them toxic and distasteful. Birds and other predators that hunt using sight, then learn various distasteful colour patterns (such as red-and-black or yellow-and-black patterns) and avoid them in the future. The quicker predators memorise this information, the fewer distasteful prey they will eat. With this in mind, lady beetles that look more like each other are less likely to be eaten. This resemblance is called mimicry. The two most commonly described forms of mimicry are Batesian and Müllerian. Batesian mimicry is when one harmless, tasty species resembles a chemically protected one. Müllerian mimicry is when chemically protected species resemble each other. In both examples of mimicry, individuals of one species change their colour pattern during evolution to resemble another. The original, constant species is called a model. The changed species is called a mimic.

Most of Adalia bipunctata in orchards in Chaharmahal and Bakhtiari province had a pink background and a narrow brown stripe at the suture like Oenopia conglobata.

Mimicry, and the general evolution and ecology of lady beetle colouration, is of particular interest to Professor Oldřich Nedvěd at the University of South Bohemia. Professor Nedvěd has been studying lady beetle biology for over thirty years and has published multiple scientific papers on the topic. Recently, Professor Nedvěd along with his colleagues, Amir Biranvand, Mehdi Zare Khormizi and Derya Şenal, have focused their research of lady beetles in the mountains of Iran.

Naming species
Professor Nedvěd and his colleagues studied three lady beetle species: Adalia bipunctata, Oenopia conglobata and Oenopia shirkuhensis. Scientists refer to species by their full Latin names. The first name is the genus and it gives an indication that the species is genetically similar to other species with the same genus name than to species of different genera. Of these three lady beetles, Oenopia conglobata and Oenopia shirkuhensis are closely related. The genus can be abbreviated as an initial. The second name is the species and can be more descriptive. For example, Mehdi Zare Khormizi named O. shirkuhensis after the Shirkuh Mountain where it was discovered.

Polymorphic species can also have an extra name that describes their colour morph. In Iran, A. bipunctata has four different morphs. The most common morph is orange-red with two spots and is called A. bipunctata forma typica. Forma means form (or morph) and can be abbreviated, and typica describes the particular morph. The other morph can be orange-red with 14 spots (f. fasciatopunctata). O. conglobata also has many colour forms, but the typical colour morph is pale pink with 16 spots and a narrow black stripe at the suture (the seam where the wing covers meet).

Changing spots
In orchards in Chaharmahal and Bakhtiari province, Iran, Professor Nedvěd and his colleagues studied the colouration of A. bipunctata and O. conglobata. To do this, the scientists collected multiple lady beetles from trees and observed their colouration and other minute morphological characters under microscope. They found that most of the A. bipunctata f. fasciatopunctata they collected had a pink background with a narrow brown stripe at the suture. Pink is an unusual colour in beetles and is created by a having layer of red pigments over a white layer deeper in the elytra.

The scientists suggested the similarities can be explained by Müllerian mimicry, where O. conglobata is the model species and A. bipunctata f. fasciatopunctata is the mimic. The mimic, A. bipunctata f. fasciatopunctata did not change their spots, but added a suture stripe that is not present in other morphs. The two species live in the same isolated orchards surrounded by the mountains and are vulnerable to the same predators. This environment provides the opportunities for selection of matching colours. In some cases, groups of more than two similarly coloured lady beetles can form Müllerian mimicry rings. However, this generally occurs when the mimic and model species live in the same place.

Indian governments have been reluctant to fully embrace the technology of genetic modification, and farmers’ enthusiasm for Bt cotton has been questioned.

Discovering new species
In the diverse mountain habitats of Yazd and Kerman provinces, Iran, Professor Nedvěd and his colleagues discovered and described a new species of lady beetle: O. shirkuhensis. This new species was the only species of lady beetle found at high elevation on the slopes of the Shirkhuh mountain. The scientists took body measurements and photographs, and also dissected the male genitalia from the beetles as this is a reliable method of identifying insect species. Up until this discovery, there were four known Oenopia species in Iran. Besides the shape of genitalia, O. shirkuhensis can be also separated from other Oenopia species by the orange-red colour of its elytra and its two rounded black spots.

Although the colour pattern of O. shirkuhensis is strikingly similar to the orange-red common form of A. bipunctata f. typica, the placement of the spots is identical to the largest spots on O. conglobata. The scientists believe that O. shirkuhensis only evolved from O. conglobata when they became isolated on the Skirkuh mountain.

Bidirectional Müllerian mimicry
In Chaharmahal and Bakhtiari province, O. conglobata is the model species and A. bipunctata is the mimic. Here, A. bipunctata f. fasciatopunctata adopted a pink background that is not found elsewhere in the species. However, in Yazd and Kerman province, A. bipunctata is the model species and the Oenopia genus is the mimic. Here, it is thought that O. conglobata increased red colouration and reduced its spots before geographic isolation led to the evolution of a new species (O. shirkuhensis). Considered together, Professor Nedvěd and his colleagues suggest this is an example of bidirectional Müllerian mimicry. The lady beetles take on the role of both mimic and model in different provinces of Iran.

What inspired you to study lady beetles?

<>When I entered Charles University in 1984, I met Dr Ivo Hodek, who was a world-leading specialist on this family of beetles, with contacts to many other specialists worldwide. He wrote a book about ladybirds in 1973, which I liked very much and I wanted to study these beetles. He became my supervisor. Another teacher who showed me ecology of these beetles in the field was Alois Honěk, and Ivo Kovář taught me taxonomy of the group. The fact that these beetles are favourite ones of many people and that they are beneficial to agriculture played a smaller role.

Are there many other examples of bidirectional Müllerian mimicry?

<>Mimicry usually has one species as model and another as mimic, and that is all. In the Capuchinbird, sexual mimicry appears to be bidirectional. Some individuals of both sexes have been observed to mimic the behaviour of the opposite sex at their lek. There are numerous possible examples of interspecific resemblance in song components and plumage among territorial birds. When two birds mimic each other’s warning signals, ‘character convergence’ of phenotypes should occur. In insects, wing patterns of the Heliconius butterflies exhibit local convergence. 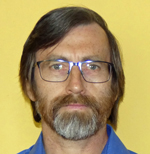 Oldřich Nedvěd’s research is focused on the biology of ladybirds.