Around two billion peripheral intravenous catheters are inserted each year globally. However, a large percentage of these lead to complications, such as infections or becoming dislodged, requiring replacement in order for therapy to continue. Dr Sheng Zhang at Adhezion Biomedical, USA, has been involved in developing an adhesive, SecurePortIV®, which secures intravenous catheters by holding them in place and sealing the insertion site to prevent bacteria from entering the bloodstream. This offers a promising and proven option for reducing the health and economic burdens associated with failed catheter insertions.

Catheters are tubes inserted into veins and arteries to deliver medications and fluids directly into the bloodstream. They are also used for critical vital sign monitoring. Peripheral intravenous catheters (PIVC) are usually placed on the arm or the back of the hand. The placement of a PIVC is the most common invasive hospital procedure globally, with more than 300 million inserted each year in the USA alone and two billion worldwide.

As well as those placed peripherally, some catheters are inserted directly into one of the central veins in the neck, chest, or groin – these are called central venous catheters (CVC). Devices placed in central veins are intended to remain in place for longer intervals for patients who require longer-term treatment. A peripherally inserted central catheter (PICC) is a type of CVC, usually placed in the upper arm and threaded through the vein until it terminates in one of the large veins near the heart. These catheters are often used in patients who require longer-term intravenous therapy, like chemotherapy or antibiotic therapy.

Typically, IV catheters are inadequately secured using a transparent dressing, gauze, and tape. This approach leaves the catheter vulnerable to migration and dislodgement. Previous research has shown that bacteria can migrate to the insertion site and colonise the hub, the part of the IV catheter device which joins the needle to the blood line.

Although 60–90% of all patients will require a vascular access device during their hospital stay, there is a high chance of complications, like infection, dislodgement, or blockage, which require the catheter to be removed prematurely. This corresponds to around 25% of CVCs including PICC lines, and 30–40% of PIVC. Infections may increase the length of time someone has to stay in hospital, delay the care they are there to receive, and contribute to the emergence of antibiotic resistance in bacteria.

Placement of peripheral intravenous catheters is the most common invasive hospital procedure carried out around the world.

There is a financial impact associated with replacing these devices and an added burden to healthcare professionals who must spend the time to replace the catheter and treat any associated complications. Catheter-related bloodstream infections (CRBSI) in European countries account for an estimated 14,000 deaths each year, with related costs of up to 164 million euros. In the USA, CRBSI are estimated to cause around 28,000 deaths per year and cost the healthcare system up to 2.3 billion US dollars annually.

Dr Sheng Zhang, Vice President of Research and Development at the medical device company Adhezion Biomedical, explains how he and his team have developed a pioneering catheter-securement and catheter insertion-site sealing adhesive called SecurePortIV®. SecurePortIV® is designed to reduce these common complications associated with venous and arterial vascular access devices.

Adhezion Biomedical have led the field in the development and production of adhesives and other products. They have commercialised a range of adhesive products for uses other than IV catheter management. For example, their products include adhesives that can be used for sealing different types of wounds, including surgical or chronic wounds, and those which reduce or eliminate infections. The latter can be used to form a barrier which helps maintain a sterile area during operations and prevents any bacteria on the skin entering the surgical incision. The company has also produced an innovative adhesive for use in veterinary medicine.

The product is based on cyanoacrylate, a recognised strong, fast-acting adhesive which is already used in many settings and perhaps best known for its role in superglue. Medical-grade cyanoacrylate adhesives are very similar, except they are required to undergo more rigorous testing to meet stringent quality control standards. Zhang emphasises that SecurePortIV® is currently the only medical-grade cyanoacrylate-based product approved by the US Food and Drug Administration for use with IV devices.

Using a specially designed dropper, the liquid adhesive is placed directly at the needle insertion site and under the catheter hub. Once applied, the adhesive is allowed to dry for 30 seconds and maintains its seal and securement. It is immediately water resistant and seals the insertion site, providing rapid haemostasis and creating a barrier which prevents bacteria from entering through the wound in the skin.

This means that SecurePortIV® catheter-securement adhesive can secure the catheter at the insertion site, as well as hold the hub in place against the skin, reducing movement and the risk of dislodging the device.

The adhesive slowly releases as our skin cells naturally regenerate, starting at about five to seven days after application. Any residual adhesive does not need to be removed before reapplication of SecurePortIV®. If needed, at catheter removal, standard adhesive remover may be used to remove SecurePortIV®. It is also safe for all catheter materials, including silicone and polyurethane.

When used in combination with a transparent dressing, SecurePortIV® can secure the catheter to the skin up to ten times more securely than a dressing alone. This is particularly important given that Zhang states dislodgement or migration accounts for up to 50% of failed catheters.

SecurePortIV® has been shown to have antimicrobial effects against bacteria, fungi, and yeast and can immobilise them, preventing them from entering the insertion site and causing infections. When we consider that there can still be microbial colonisation at a catheter insertion site in over a fifth of patients, despite the use of antiseptic preparation products, this becomes a critical benefit. In addition, previous research showed a 90% reduction in CVC-associated bloodstream infections following the use of SecurePortIV® in some settings.

Sticking the research together

Zhang and colleagues have recently reviewed the existing literature to explore the use of cyanoacrylate adhesive for catheter securement. The review included 16 articles that met their inclusion criteria, and the results showed that the adhesives have promising implications for PICC and CVC insertion sites, although more work may be required to expand on their benefits for peripherally inserted IV catheters. However, many of the previous findings can likely be translated to this common hospital procedure.

Some studies have shown that cyanoacrylate adhesives have been up to 100% effective in reducing bleeding after the insertion of intravenous catheters. Therefore, Zhang and colleagues have suggested that SecurePortIV® can quickly seal the insertion site, preventing bleeding and reducing the risk of infection. Many clinical studies have proven that cyanoacrylate adhesives such as SecurePortIV® can significantly reduce blood stream infections associated with CVC, PICC, and PIV catheters.

Even when taking the cost of SecurePortIV® into account, Zhang’s research suggests the intervention was cost neutral overall. He highlights the need for further research, especially into the cost–benefit analysis of using cyanoacrylate adhesives with PIVCs.

From central to peripheral use

SecurePortIV® has been well adopted to reduce/inhibit complications associated with CVC and PICC, suggesting there will also be significant benefits to its use with PIVCs.

Given that around 0.18% of the two billion peripheral catheter insertions done annually around the world lead to a bloodstream infection, such a large reduction in infection could potentially help millions of people. In addition, infections from peripherally inserted IV catheters was one of the top ten patient concerns listed by the Emergency Care Research Institute in 2019 and again in 2021. Reducing the incidence of infection also builds patient trust and reduces fear around the vitally important procedure.

Zhang suggests that SecurePortIV®, used in combination with transparent dressings, should represent the gold standard of catheter insertion.

SecurePortIV® is the first cyanoacrylate adhesive designed and approved for use with intravenous devices. Zhang explains it is up to ten times stronger than transparent film dressings alone and can significantly reduce catheter movement, migration, and dislodgement. The fast sealing of the wound means that bleeding is quickly stopped, and a water-resistant barrier is created that protects the patient from infection. 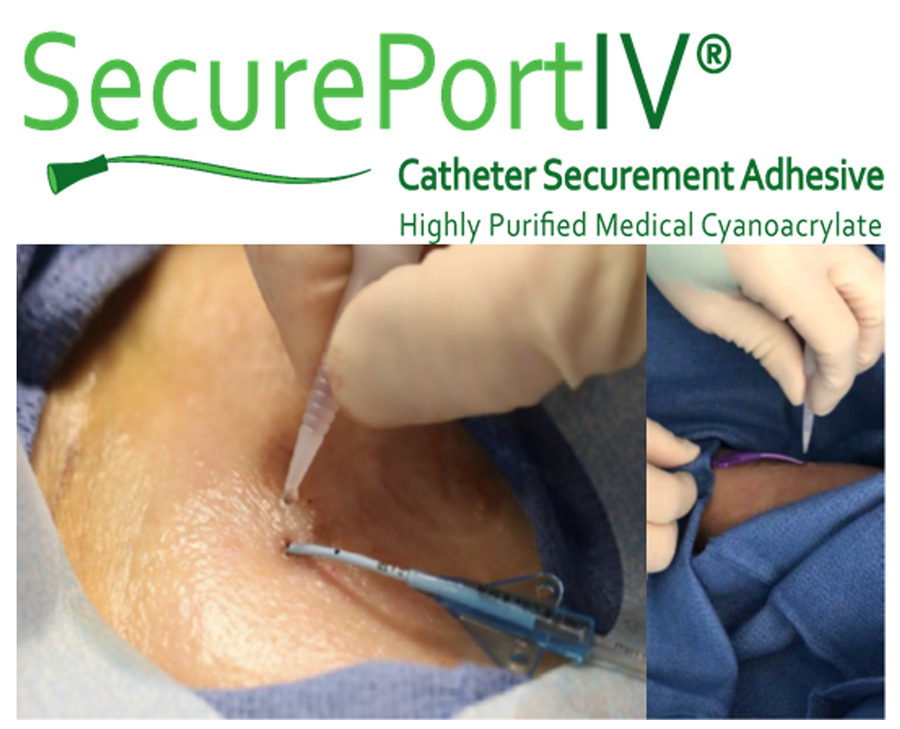 Zhang suggests that SecurePortIV®, used in combination with transparent dressings, should represent the gold standard of catheter insertion. A growing body of published and podium presentations have already concluded that cyanoacrylate adhesives have a promising application for reducing complications associated with PIVCs.

As confirmed by many clinical studies, SecurePortIV® can be an effective, safe and powerful, yet cost-efficient solution to address the under-evaluated but unacceptably high complication rates associated with peripheral catheters. This will reduce the length of hospital stays and the level of care required throughout admission, as well as reducing associated healthcare costs and overall mortality rates from IV catheter acquired infections.

Due to its efficacy to prevent or reduce various complications of catheters, long-term cost savings using SecurePortIV® for catheter care and maintenance can be substantial. To address the significant threat posed by peripheral-IV-related blood stream infections, application of SecurePortIV® on PIV catheters becomes a pressing need.

Do you see SecurePortIV® being used as an adhesive for other purposes in healthcare, in addition to catheter securement?


Cyanoacrylate is an active ingredient of many products that have had a space in the healthcare industry for decades. Cyanoacrylates are used externally for surgical wound closure, wound care, dental or eye surgery, skin microbial immobilisation, and internally to seal vascular leakage and treat bleeding gastric varices or brain aneurysms, and in veterinary care, for example. SecurePortIV® is uniquely formulated and designed for improving the care and maintenance of vascular access devices. The use of glue formulations continues to evolve and expand and it’s not unexpected that they will have more uses in the future.
SecurePortIV®: The cyanoacrylate adhesive providing a new gold standard for all vascular access care was last modified: October 31st, 2022 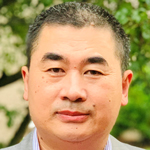 Dr Sheng Zhang currently serves as Vice President of R&D at Adhezion Biomedical, with over 20 years of experience in medical devices and chemistry research. He is the inventor of more than 120 awarded patents and pending patent applications and the author of 40+ peer-reviewed scientific publications.

Dr Zhang would like to thank Lori Kaczmarek and Marcia Wise from Adhezion’s clinical team for providing insights and revising the article. He would also like to acknowledge the hard work and support of associate investigators in this project, including Bethany S Lingle, Shannon Phelps, and Nastassia Price.