Dr Farzan Beroz has developed a physical theory of sensing that predicts cell behaviour. Cells measure stiffness by pushing and pulling on their surroundings. However, because their tissue surroundings are disordered, it has been unclear what information cells actually learn by probing. Dr Beroz estimated what a cell learns and predicted that some cells change their shape and move around to gather as much information as possible. Farzan’s findings establish a model of cell behaviour and inspire novel ways to engineer high precision sensors.

Cells are continuously exposed to mechanical stimuli from the surrounding extracellular matrix (ECM) and their neighbouring cells. These interactions give signals that guide cell behaviours from an organism’s embryogenesis to its adulthood, including cell differentiation, migration and wound healing. Throughout their lifecycles, cells probe the stiffness of their surroundings using mechanosensitive proteins. In response to stiffness cues, biochemical pathways are activated so that cells adapt and react appropriately. This biological phenomenon is called mechanotransduction.

A small change in mechanical forces can have large implications for cell behaviour. For example, shear stress on a developing tissue may determine whether a cell’s fate is to become endothelial or hematopoietic. Such decisive changes in behaviour drive metastasis and fibrosis. Thus, mechanical sensing is inextricably linked to wound healing, cancer progression and ageing. To ensure normal bodily function, cells and their microenvironment constantly engage in a reciprocal and dynamic dialogue with one another. Mechanosensing enables cells to adapt to changes in their microenvironment.

Click here to view the image in a separate windowTo add complexity, the cellular microenvironment varies dramatically in composition and topology across different tissues and over time. For example, the ECM is composed of non-cellular components (water, polysaccharides, and proteins including collagen and fibrin) and provides scaffolding for cells. It is a highly dynamic structure that cells remodel to keep our bodies functional. How do cells sense and gather useful information from a diverse landscape that shifts over time? Can a cell glean enough information from its immediate surrounding to keep our bodies running?

Intersecting physics and biology
The relationship between mechanical signals and cell function has become clearer in recent years. Since the start of the millennium, research has identified intracellular molecules that react to mechanical stimuli and influence cell proliferation, differentiation and migration. Thanks to advances in mechanobiology experimentation, researchers can now estimate the forces that cells exert to traverse, shape and probe their surroundings. With these exciting new tools, many studies have started to investigate cellular mechanosensing in tissue culture models.

These intelligent strategies exemplify how cells have evolved to cope with an uncertain microenvironment and sense useful information.

To date, most cellular mechanosensing studies have been conducted on flat surfaces. Early investigations employed soft, polyacrylamide gels coated with purified ECM proteins. These substrates were engineered to be homogeneous, flat slabs that mimick the overall stiffness of a brain, muscle or bone over their entire surface. The investigations found that cells can actually sense stiffness to distinguish between 2D substrates. In reality, however, connective tissues are highly heterogeneous 3D networks that cells live inside and move through. Culture models also fail to capture the fact that the cellular microenvironment is continually remodelled in living tissue.

Click here to view the image in a separate windowTo overcome these bottlenecks, mathematical models have been developed to elucidate how cells sense the mechanical signals of their tissue surroundings to make important decisions.

Dr Farzan Beroz’s childhood fascination with building construction toy models along with his ongoing studies in theoretical physics inspired him to foster an international collaborative effort to understand messy living architectures. He teamed up with researchers from the Max Planck Institute of Dresden, Harvard University, Ludwig-Maximilian University of Munich and Princeton University to discover how the disordered cellular microenvironment impacts on mechanosensing.

This mathematical model could lead to revolutions in medical sensors, materials science, microrobotics and econophysical modelling.

At the time of investigation, researchers had never probed tissue stiffness on the microscale, adding complexity and challenge to this revealing study. Using 3D confocal microscopy images of collagen and fibrin networks, the team developed a computer simulation that accurately captures the heterogeneity and complexity of the ECM. The research team established that in a network environment, different spots exhibit stiffnesses over a wide range. Strikingly, the range is so wide that a single local stiffness measurement does not yield enough information to distinguish tissues as distinct as brain and bone. Thus, rather than optimizing an individual measurement, cells benefit more by processing the results of multiple measurements. Published in Nature Communications in 2017, these findings can explain the presence of hundreds of focal adhesions in some cells. They also imply that cells must use intelligent strategies if they want to sense stiffness accurately enough to discern tissue identity.

Finding intelligent strategies for sensing
The collaboration’s initial findings of extreme mechanical disorder in tissues raised an intriguing question. Given that cells cannot discern the identity of their tissue with a single probe, how do cells collect enough information for tissue development and upkeep? This mystery spurred Dr Beroz to team up with physicists from University of Michigan to develop a set of equations that elucidate the best force a sensor can apply to sense stiffness. For a cell that is restricted to performing only one probe, the team proved that the cell’s best option is to grab all nearby tissue fibres and pull inwards, a process called ‘force dipole’. This is the most intelligent pattern of forces because it feels out the broadest extent of the tissue. 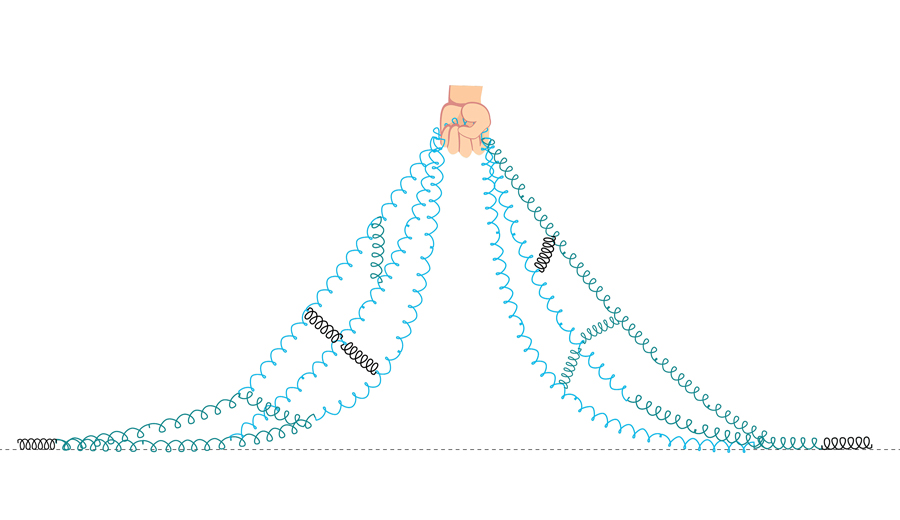 Click here to view the image in a separate window 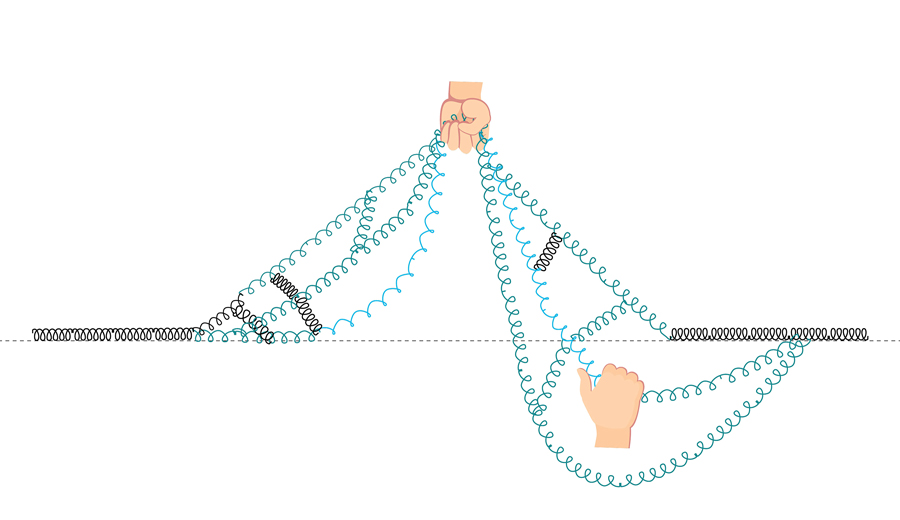 Click here to view the image in a separate window

After a dipolar probe, the cell can collect more information by performing additional probes to feel out other parts of the tissue. For example, if the cell remains in the same location, it could push and pull simultaneously. Pushing fibres forward and backwards while pulling fibres from the side is a ‘force quadrupole’. By pushing and pulling at increasing frequencies, cells glean more bits of information. To collect every last bit, a cell has to perform as many distinct probes as it can. The cell completes its inference by averaging the stiffness cues in an intelligent way. This ‘sensory multiplexing’ strategy allows cells to learn more with each additional probe. Consistent with these predictions, cells appear to use sensory multiplexing to distinguish between substrates that differ in stiffness by as little as 5%. Such precision would enable a cell to distinguish between brain, heart, and bone based on their mechanical properties.

This study has huge implications for cell biology – the findings can help explain cancer metastasis (how do tumours detect appropriate locations to colonise?) and wound healing (how do cells know when to secrete proteins to heal wounds?) Moreover, the study’s mathematical framework bears on a remarkably broad range of other systems, including dielectrics, diffusing materials, frictional materials, geomaterials, piezoelectrics, thermoelectrics and econophysical entities. It could potentially revolutionize medical sensors, microrheology, quality control and microrobotics. In all of these contexts, the discoveries of Dr Beroz’s investigation pave the way for making sensors that estimate material properties at the physical limits of spatial resolution.

What is the future trajectory of your research in relation to cellular function, such as cell migration during differentiation?

We focused on cells embedded inside a medium. I am adapting our framework to different sensory geometries and to moving sensors to investigate the trade-offs between undulation and migration. In the long run, I hope to generalise our sensing framework to account for thermal fluctuations, which are relevant to intracellular phenomena. More broadly, addressing cellular trade-offs and thermal fluctuations will be major steps on my path to developing a unified physical understanding of perception.

Sensing in a disordered environment was last modified: September 2nd, 2021 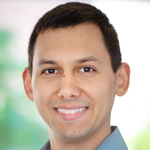 Farzan Beroz is a Life Sciences Fellow at the University of Michigan where he develops theories of living architectures. He received his Ph.D. in Physics from Princeton University. Before that, he double majored in Physics and Russian at Duke University.

The research of Farzan Beroz aims to uncover the physical principles that shape living architectures, including tissue networks and bacterial biofilms.

This work was supported in part by a Michigan Life Sciences fellowship, the National Science Foundation, a Margaret and Herman Sokol Faculty Award, the Harvard Materials Research and Engineering Center, a Lewis-Sigler fellowship, the German Excellence Initiative via the program ‘NanoSystems Initiative Münich’ (NIM) and the Deutsche Forschungsgemeinschaft (DFG), and the hospitality of the Aspen Center for Physics.