How can we bend matter to our will? Folding patterns, as employed in origami, imply severely limited shape-shifting possibilities. These soft materials also need to have the right shape-morphing properties to be useful for their desired application. Professor Ho-Young Kim at Seoul National University has been building and modelling particle rafts – new soft composite interfaces with superior deformability, that hold some exciting possibilities for the future of wearable electronics, soft robotics, biomedicine, and smart architecture.

Folding is a process whereby an object is bent into a new shape. When folding objects like paper, we often deliberately introduce creases, so the object will hold its new shape. With the right arrangement of folds, incredibly complex architectures can be created with a whole host of different shapes and structures.

A good paper for origami is thin enough to be folded easily but sturdy enough that it will hold its shape and structure without bowing or tearing during the process. As paper is easy to crease, it is straightforward to give the material a ‘memory’ of the shape. In the case of paper, this process is irreversible, which may be problematic when it comes to reusing paper for future creations.

Biology and polymers do not initially seem to have much in common with the properties of paper. However, many biological systems are examples of soft, deformable matter. The final structural properties of polymers depend very much on their chemical composition, treatment, and processing, but they can also be designed to be highly elastic and flexible.

Creating materials that can be used as the starting point for shape morphing is much more challenging than the physical process of trying to fold paper. First, there needs to be a way of manipulating and folding these soft systems at will. Often, the desired reshaping process is significantly more complex than simply folding the complex or substrate in half, so there needs to be a way to create the driving forces to form such shapes.

This material looks incredibly promising in terms of applications that demand a controllable soft matter.

Nature already has many ways of achieving this level of shape morphing. One example is in plants, where parts of the plant structure can be arranged or swollen by transporting water to different areas. Some species, like mushrooms, have caps that start to droop in drier conditions as the water moves out. In petals and leaves, plants can deform the structures to move to advantageous conditions, or, during the growth process, the growth can be driven asymmetrically to create the complex and often highly visually appealing construction of a flower petal.

Professor Ho-Young Kim at Seoul National University and his team have been puzzling over how to create artificial systems that can maintain some of the shape-morphing complexities found in natural species. As well as creating new materials that can be shaped at will into a variety of complex structures, Kim and his team have been working on new multi-physics models to explain the morphing process and the topography of the three-dimensional structures they can create with their new soft material systems.

Electric fields
The first challenge when designing a soft-matter system to undergo shape morphing is finding a way to trigger the shape-changing behaviour and control the geometry of the final state. Kim and his team have been achieving this with strong electric fields.

Kim and his colleagues found that, on applying an electric field to a fluid-fluid interface system, the electric field acts as a stimulus to destabilise the fluid interfaces. This can be a problem for some shape-morphing materials as this means for structures that generate high amounts of electric shear stresses near the interface, the overall stability of the structure is likely to be poor. If the interfacial deformation is extreme enough, this can lead to ejection, detachment, and jetting of the particles, which can completely destabilise the entire structure.

Design tricks
To avoid any issues with electric shear stresses, Kim and the team designed their new material to include a raft of dry insulating particles at the interface and a balance mechanism arising from electric discharge. This means no extreme shear stresses build up that would result in the destruction of the overall shape, and this also ensures that the particles remain stable after they have undergone the morph into their new shape.

Making Kim’s new particle rafts meant designing a material that was highly elastic. This meant the shape-changing process could be reversible and controllable. Unlike with folding paper, where it is impossible to remove the creases, these flexible soft-matter systems can be transformed between different states at will. That has meant designing materials that can deal with large amounts of asymmetric forces but that can keep a smooth and stable surface and interfacial structure throughout the morphing process.

The new materials designed by Kim and his team can be morphed into tower-like shapes from a flat raft by a remote electrode. The towers can also be translated by moving the electrode. While this material looks incredibly promising in terms of applications that demand a controllable soft matter, there are still many more questions to answer about some of the dynamic and non-linear behaviours of the materials more generally. The team believe the rafts are ideal model two-dimensional granular systems, and they are some of the first systems that can also be propelled horizontally while still maintaining their shape.

It has been a huge challenge to find particle systems that can be assembled into three-dimensional shapes and remain stable, let alone to find one that can also be propelled. Kim’s work represents a huge step forward, not only in better understanding the complexities of these morphable soft-matter systems, but also in moving them closer to potential applications.

Applications of soft materials
Controllable, deformable soft materials, like Kim’s, could potentially be used to create flexible and smart structures. As the morphing process is reversible with no ill-effects on the particle integrity, it is just a case of finding sources to act as electrodes to provide the necessary fields for the shape-changing to take place. One possibility for this could be human fingers or other polymer species to start to develop controllable human–machine interfaces. Otherwise, they could be used to create more advanced articulation in robots for more complex tasks than can be achieved with standard mechanical articulation.

Other possibilities exist in the world of biomedicine. Stretchable, elastic polymers could be used to create artificial, self-healing skin. Another use of morphable particle systems could be in drug delivery – where the drug is encapsulated into the material structure and can then be released at the desired location when the external stimulus is applied to trigger the shape change. This is an ideal way of ensuring drugs are delivered only at the required site, and a good way of minimising side effects or unwanted uptake of drugs in other regions of the body.

Kim’s material has a promising future and his multi-physics models are another key step in helping other researchers design flexible, foldable systems for the soft matter of the future.

What types of structure do you think it may be possible to create in the future?

By sophisticated control of the external electric field, it will be possible to express subtle curvature of complicated three-dimensional structures like a human face, and to build tall and complex structures like a miniature Eiffel Tower. This will eventually lead to a three-dimensional physical display with high precision, which will revolutionise how we create and consume visual contents in the coming era of the metaverse. 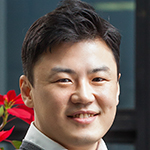