Biology
The ridges on the pads of our fingers, and the fingerprints we produce, have several benefits, including identification purposes. However, this was not the evolutionary purpose of ridged skin on the finger pad, and it is more likely to have evolved to optimise grip and touch. Professor Gun-Sik Park, Seoul National University, has explored how the finger pad has its own moisture regulation mechanisms to ensure optimal grip in both wet and dry conditions.

A fingerprint is an impression left on a surface, made by friction ridges on the finger. A friction ridge is a raised portion of the epidermis, the outermost of the three layers which make up the skin. Every human finger pad has a unique pattern of these ridges, as do some primates and koalas. However, some species have smooth pads.

It is generally believed that fingerprints evolved to help with grip and touch, and possibly to prevent blisters, but the exact mechanisms by which ridges on the finger pad may help grip remains unclear. In some cases, ridges have been shown to increase friction through interlocking contacts with a surface but may also reduce friction by reducing the contact area with a surface. It is also thought that moisture plays an important role, however too much moisture can lead to slipping. The hands and feet also have a much greater density of sweat glands than flat skin, although these seem to respond to anxiety and stress rather than functioning to regular temperature.

Professor Gun-Sik Park and colleagues at Seoul National University have explored this in further detail and hypothesise that there is another, undiscovered moisture regulation mechanism for optimising the grip of ridged skin.

Moisture regulation in finger pads
The researchers used a variety of measurement techniques to analyse fingerprint contacts with glass. These included techniques based on electromagnetic waves, in a variety of ranges from megahertz to visible ranges. Electromagnetic waves are created by periodically changing electric or magnetic fields and depending on how this periodic change happens and the power generated, different wavelengths within the electromagnetic spectrum are generated. These wavelengths range from radiowaves, through visible light, to gamma rays as their frequency increases and their wavelength decreases. Megahertz (MHz) corresponds to a frequency of one million cycles per second, compared with visible light which has a wavelength of around 400–790 terahertz (one terahertz equals one trillion cycles per second).

A fingerprint is an impression left on a surface, made by friction ridges on the finger.

These advanced imaging techniques allowed the researchers to measure and visualise changes in moisture in the furrows between the ridges after occlusion and external wetting.

Professor Park asked participants to place their finger pads on a glass panel. These participants were males aged 27 to 33 years old. The finger pads were either dry or wet, meaning that a small droplet of water was added in between the finger pad and the glass.

The researchers measured the levels of friction between the finger pad and the glass. They also used a special moisture sensor and several different imaging techniques to explore the level of grip.

The results showed that regardless of whether the finger pad was wet or dry, there was a consistent volume of moisture within the furrows. This is likely the level of moisture required for optimal grip. In addition, the researchers found that the level of friction seemed to be higher in the thumb, compared to the little finger. This would also correspond to an increase in the size of the surface area in contact with an item.

Initially, after the water droplet is inserted between the finger pad and the glass, the water gathers in one area. This water is then gradually disseminated through the furrows on the finger pad, instigating a drying phenomenon. The imaging techniques used by the researchers also showed that this evaporation rate varied across the finger pad, depending on the depth of the furrows and where they are located on the finger pad. Moisture also seems to accumulate in the base of the furrow. The furrows towards the side of the finger appear to siphon moisture to the entrance of the channel where it can evaporate. They do this by creating a low resistance pathway for the water to move through.

The researchers explained how finger pad ridges are able to maintain optimal moisture levels for grip.

The study also showed that this evaporation only happened when liquid was added to ridged skin, the same effect was not seen with flat skin such as that on the chest, forearm, or thigh. Alongside this, there did not seem to be an optimal moisture level for flat skin, as the volume of moisture did not equalise as it did with the ridged finger pad. This may be explained in part by the increased levels of sweat secretion in flat skin compared to ridged skin.

It may initially be thought that due to the ridged nature of the finger pad, this would reduce the contact area that touches a surface. However, Professor Park explains that other factors such as force and the level of plasticity must also be taken into account.

The ability to regulate moisture levels through evaporation is key when we consider that excessive levels of moisture on a finger pad can reduce friction and increase the risk of slipping.

Overall, the results suggested that two different mechanisms are at play. The first allows ridges to act as a microfluidic array, moving fluid through microchannels on the finger. This also promotes the evaporation of excess moisture whilst still allowing some to remain where it is needed.

Secondly, when moisture is present, the finger ridges become soft and conform to the gripped surface and subsequently block sweat pores. If the ridges of a dry finger pad are pressed tightly to the surface, then sweat pores essentially become blocked. Whilst a wet finger pad will initially have unblocked sweat pores, the ridges become plasticised (more flexible and mouldable) over time. This softening of the ridges allows a closer contact between the finger pad and the surface, as with the dry finger pad. The result of this close contact is a cessation of sweat secretion and a steady state hydration level which is optimal for friction and grip.

Both mechanisms help to maintain the optimal amount of moisture in the furrows to maximise grip, regardless of whether a finger pad is initially wet or dry. Professor Park explains that these evolutionary adaptations have allowed primates to utilise manipulative and locomotive abilities in both wet and dry conditions, something which may have given them an advantage over other animals.

A film of moisture between the ridges of the finger pad and the contact surface could cause a loss of friction and increase the risk of slipping, something that may be catastrophic for a primate high in a tree. The interaction of ridges with a surface is complex and involves retention of moisture through capillary action, as well as a softening of the ridges which reduces the space where a film could form. Both of these events prevent a film of water forming and improve grip.

Improving technologies
One limitation of this study is that it required the use of glass as a contact surface due to its transparency for imaging. However, natural surfaces are rough and can be permeable to moisture. For example, materials such as paper have been shown to absorb secreted sweat and decrease friction over time. The ability to soften and mould to a surface may be one way in which the ridges on finger pads overcome this challenge.

The work of the Seoul National University research team provides evidence of the underlaying mechanisms used by finger pads to regulate moisture, and thus ensure optimal grip. The furrows on the side of the finger pad encourage evaporation but the ridges towards the centre of the finger pad retain sufficient moisture to ensure the ridges are plasticised and conform to their contact surface.

Professor Park’s research helps improve existing knowledge of the evolutionary benefit of fingerprints. In addition, a better understanding of the friction of finger pads has important connotations for progressing technologies, such as touch screens, and may help us understand more about how we perceive textures.

Do you plan to do further research into why and how fingerprint ridges help grip?

<>The ways we will try to extend this research include developing a deeper understanding of the physics behind this phenomena and observing time-resolved phenomena in fingerprint furrows. 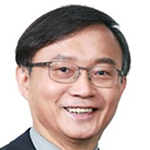 Gun-Sik Park received a PhD degree in physics from the University of Maryland, College Park, MD, USA, in 1989. Since 1995, he has been a Professor at the Department of Physics Education and Department of Physics and Astronomy, Seoul National University and he became Professor Emeritus in 2021. Currently, he is Director of the Center for THz-driven Biological Systems in SNU which is sponsored by National Research Foundation and Ministry of Science and ICT of Korea. He has been an Honorary Professor of Samarkand State University in Uzbekistan since 2020

This work was funded by the National Research Foundation of Korea through the Korea government Ministry of Science and Information Communication and Telecommunication (MSIT) under Grants 2016R1A3B1908336.