Junfan Lin is a postdoctoral researcher at the Sun Yat-sen University, China. His research interests lie in Chinese cuisine and culinary tourism, where he has helped to rethink Chinese food through a geographical lens. In his research paper, Taste and place of Nanxiong cuisine in South China, he specifically explores the identity of the city, Nanxiong. Through interviews and observation, he explores the role that spicy food has in the culinary traditions of this city, using a regional framework to explore the true connection between taste and place.

The research of Junfan Lin, Sun Yat-sen University, revolves around the phrase ‘we are where we eat’. Lin explores the idea that cuisines have different geographical and human implications. Different regions around the world experience taste differently and construct different cultural conceptions of taste. In this age of mass tourism, the appeal of local, authentic food is only increasing in popularity. Lin is interested in exploring the connections between taste and place identity. To do this, he uses a regional analytical framework, a method he views as being under-utilised in cuisine research.

The connection between taste and place
Lin argues that taste is not just an abstract concept but rather a way of creating one’s own geographical identity. For instance, different regions have different concepts of taste. Lin particularly focuses on spiciness, which is not considered one of the West’s basic tastes. In Chinese culture, however, the main flavours include saltiness, sourness, sweetness, bitterness, umami, astringent, and spiciness. This is why spiciness was chosen to be studied in the Chinese context. Within China, there are many variations of taste throughout the regions. Lin chooses to focus on the city of Nanxiong, in Guangdong Province, in order to examine these particular subtleties and nuances.

Taste comes in three dimensions. First, there’s the physiological process on the tongue. Second, there are the individual preferences of what each person does and doesn’t like. Third, there’s the fashion and aesthetics of taste. It can be an indicator of class, wealth, and place identity. It’s this latter dimension that is the focus of Lin’s research.

Studying taste in Naxiong
To study the connections between taste and place within a regional framework, Lin focused on the case study of Nanxiong cuisine. Participant observation data was collected, along with 14 group interviews and a further 38 in-depth interviews. These took place in Nanxiong, a mountainous, tropical city. While it lies within Guangdong Province, it’s close to the borders of the Hunan and Jiangxi provinces. This makes it an interesting place to research the sense of identity that the food from this region offers.

The food culture of Nanxiong is founded on Hakka cuisine. This food doesn’t tend to be spicy, using ingredients such as chicken, mountain rats, mushrooms, crabs, pickled cabbage, dumplings, duck, goose, and pork. Lin immersed himself in the food culture of the region, even working as a waiter for ten days. This gave him ample opportunities to interact with the flavours of the food and gauge how this impacted the locals consuming it.

Lin found that Nanxiong cuisine went beyond traditional Hakka dishes, using plenty of chilli peppers to increase the spiciness. This hot food is thought to increase resistance to the cold, which is useful in China’s harsh, windy mountainous regions. The consumption of spicy chillis has long been documented in the Nanxiong region and is believed to have given farmers energy to work in these harsh conditions. Spiciness, therefore, is part of Nanxiong’s history, being passed down the generations.

Lin argues that taste is not just an abstract concept but rather a way of creating one’s own geographical identity.

Place is paramount
One of the main conclusions of Lin’s studies is that place is one of the most important shapers of cuisine. The study showed that the regional approach is a useful one because it has a long historical duration, is concretely identified, and covers a large area. The concept of place tends to be smaller, less concrete, and with less history. Despite this, it’s clear that geographical location is indeed a large determinant of taste.

While the Hakka cuisine on which Nanxiong dishes are based may be mild in flavour, this unique city considers spiciness an integral part of the local identity. Nanxiong is connected to places in other provinces and, therefore, borrows their flavour traditions, going against many of the cuisine choices within Guangdong Province. Spiciness, though, is considered part of what has made Nanxiong a great city. That’s why many continue to add more chillis than visitors might expect.

Spiciness can help identify insiders and outsiders. For instance, one participant in the study didn’t view Cantonese cuisine as being particularly spicy. However, after sampling some local Nanxiong dishes, the participant learned about the subtleties and nuances that exist in different regions. The introduction of spices into the Hakka cuisine eaten in Nanxiong represents a long history of this region, forming strong bonds with other regions that appreciate spicy food. It’s also important to note that Lin’s research suggests that ethnicity plays a limited role in taste and that place is far more important.

Seasoning the senses
Another significant aim of Lin’s research was to examine the flavour principle in place. He found that while seasoning is a useful way of simplifying cooking, it can also be used as a way to explain cuisine, people, and place. The use of certain flavours in different dishes can quickly identify which region a person comes from. For example, one participant said that he smelled the combination of sour bamboo shoots and spicy chillis coming from a neighbour’s home. Without having ever met them, he knew instantly that they were Nanxiong locals.

In this age of increased mobility, foods from one region can easily be found elsewhere. When eating the classic Nanxiong dish of sour bamboo shoots and spicy chilli peppers, a person can feel at home, even when they’re far away in Shenzhen. In fact, the increased globalisation and homogenisation of food has caused many to seek out authentic dishes from their childhoods. In doing so, it’s possible to feel deeply connected to a place, even when you’re a long way from home. The right combination of seasoning is about more than just simplifying cooking; it’s about understanding and experiencing a particular place-bound practice and culture.

Lin’s research uses a regional framework to understand the complex connections between taste and place. By interacting with participants and working with the food industry in Nanxiong, he understands the nuances of this particular style of cuisine. Using the metric of spiciness, he’s uncovered how Nanxiong food differs from similar styles and how this is expressive of the place identity for those people living in this region.

To what extent does the mountainous terrain of Nanxiong affect the local cuisine?

This terrain feature affects Nanxiong cuisine in two ways. First, it is colder in the mountains in winter when there may be snow; eating chillis helps to protect against the cold, wind, and damp. Second, traditional Hakka cuisine – the basis of Nanxiong food – uses lots of mountain food products and, therefore, mountainous terrain becomes a historical symbol for ethnic Hakka. 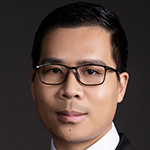 Junfan Lin recently graduated from the University of Leeds. He has a research interest in Chinese cuisine and culinary tourism. He has recently worked on rethinking contemporary and traditional Chinese food with a geography lens.

Junfan Lin explores the connections between taste and place identity.