Arts & Humanities
Misconceptions about the Vikings are more numerous than facts, one being their portrayal as sailors blindly battling through cold, fog, wind, and turbulence. Through scientific research and their own voyage on the (not so) high seas, Professor William Doolittle (University of Texas) and Professor Stephen Stadler (Oklahoma State University) have dispelled this myth. Summertime winds and currents would not have been serious obstacles. Moreover, it took the Vikings 200 years to finally cross the Atlantic, after discovering and settling one island at a time. Once established, travel between islands took only a few days. By the time they arrived in North America, they were familiar with North Atlantic geography, including its islands, the waters between, and the regional climatology and meteorology.

The prevailing 21st-century view of the Vikings is one of pelt-clad warriors battling the elements as they sailed through the treacherous waters and inclement weather of the North Atlantic Ocean. However, this long-unchallenged prevailing narrative of pre-European trans-oceanic sailing does not constitute proof. Two American academics – Professor William Doolittle (University of Texas) and Professor Stephen Stadler (Oklahoma State University) – have questioned this narrative. From their first-hand experience on North Atlantic waters, along with analyses of Viking sailing technology and expertise, oceanic systems, and climatic data, Professors Doolittle and Stadler have subjected this accepted narrative to scientific investigation. In the process they have revealed a potential new narrative, one that puts Viking trans-Atlantic crossings in a different light and shifts the focus from swashbuckling opportunism against the elements to clearly planned and executed navigation by a people familiar with seasonal oceanic conditions.

Viking Technology
In contrast to the shield-bearing, oar-powered long boats of our imagination, the Vikings actually used sailing boats, known as knarrs, for their long-distance oceanic travels. Purpose-built cargo ships, knarrs were long (approximately 16m), wide (4.6m at the widest part), and had a deep draft (approx 1m); the freeboard distance (between the waterline and the upper deck level) was more than 1m. Despite their sturdy design, they were light, and constructed from peg-fastened oak planks using the clinker method (that is, the edges of the planks overlapped). With a square sail of some 90m2, knarrs could reach speeds of 10 knots (or approximately 11.5 terrestrial miles per hour). They had a capacity of up to 24 tonnes, and fully loaded could reach up to 3–6 knots (around 3.45–6.9 terrestrial miles per hour).

Along with the boats themselves, the Vikings had various navigational technologies at their disposal. First and foremost, they took note of their travel times between destinations, and were able to calculate their speed of travel. Using a sun compass, they were able to calculate their sailing direction, and using sunstones (sólarsteinn, light-polarisation stones used to determine sun angles under cloudy conditions) they could calculate their latitude from the sun angle. These technologies were used to great effect, particularly as they were combined with deep knowledge of the oceanic and marine environment. Many of their long-distance travels were towards known landmarks or landmasses, and they were adept at interpreting the appearance and behaviour of marine mammals and birds to determine distances and directions to land. Moreover, the Vikings had extensive knowledge of the stars, allowing them to navigate at night.

Along with the boats themselves, the Vikings had various navigational technologies at their disposal.

It took the Vikings 200 years to cross the Atlantic, after discovering and settling one island at a time. The first island was found around 800 CE, but it took another 200 years to reach Newfoundland for the first time. Once a new island was found, there was much travel between it and the island(s) discovered earlier. In this way, a deep knowledge of North Atlantic geography emerged.

Once established, travel between islands took only a few days. Depending on the wind, from Norway, they could reach the Shetland Islands (165 nautical miles to the west) in approximately 28 hours (assuming a heavily laden knarr speed of 6 knots). They then moved on to the Faroe Islands (161 nautical miles and around 27 hours), whence they approached Iceland (at 230 nautical miles and around 38 hours, this was one of their longest open-ocean crossings). The longest stretches at sea, those around the coast of Greenland and from Baffin Island down the Labrador coast to Newfoundland, took up to five or six days (covering 700–800 nautical miles at a time), but were largely in sight of land.

Wind, ice, and currents
Regardless of tools and know-how, the greatest obstacle to ocean transit (then and now) remains weather and water conditions. The North Atlantic is typically portrayed as cold, foggy, windy, and turbulent. Although this is generally true, Doolittle and Stadler have gathered climatological and first-hand experiential evidence that shows that these waters can have reliable, even calm, sailing conditions, along with good visibility during the warm summer months. Previous research by others concluded that temperatures during the Viking settlement period were well above normal, and sea ice was minimal. North Atlantic winds are generally in a westerly direction, shifting occasionally for only brief periods. In particular, there are two westerly drivers: the clockwise circulation around the northern Azores Subtropical High-pressure cell, and secondly, a counter-clockwise circulation around the Icelandic Low pressure. The pressure gradient between the Azores High and the Icelandic Low peaks in winter, resulting in high wind speeds (typically 10–20 knots) that drive treacherous waves that would threaten to overtop the low gunwales of knarrs. Moreover, the high-altitude Polar Front Jet Stream is at its strongest in the winter, generating dangerous middle-latitude cyclones that can reach hurricane strength.

In contrast, the low summer-time pressure gradient between the Azores High and Icelandic Low creates relatively slow south-westerly winds, with few strong disturbances. Remnants of tropical storms and hurricanes from lower latitudes only rarely intrude during the summer months. The Vikings, who avoided sailing directly against strong winds, had a good understanding of these conditions. Sensibly, they were hesitant to sail in the winter.

Current speeds and directions are largely a function of average wind speeds and directions, along with the positions of islands. The North Atlantic currents were generally manageable for Viking navigation for three main reasons: firstly, current speeds (< 1 knot) are negligible compared with that of the knarrs (3–10 knots); secondly, the Vikings travelled with the currents, or obliquely to them; and thirdly, the current routes along which the Vikings travelled are generally free from large eddies, and are more stable than the Gulf Stream further to the south. By the time the Vikings arrived in North America, they had extensive knowledge of the geography of the North Atlantic.

The final potential issue was sea ice. However, with the North Atlantic sea-ice season running from October to June, and by restricting their activities to the summer months, the Vikings could largely avoid the problem while crossing the open sea. Moreover, evidence from Iceland suggests that sea ice was less extensive and shorter lasting prior to 1100 CE, helping to facilitate Viking travel. Even had they encountered significant sea ice, a 1976 re-enactment of a 550 CE voyage found that waters were calm while sailing among sea ice between Greenland and Baffin Island. Shoreline ice did remain an issue when approaching coastal settlements around Iceland and Greenland, but the slow speed and high manoeuvrability of knarrs made avoiding icebergs and floes relatively simple.

Putting theory into practice
Based on their analysis of Viking technology and expertise, in conjunction with ocean circulation and climate data, Doolittle and Stadler became convinced that the Vikings would have the requisite skills and ample opportunity to cross the Atlantic with relative ease. However, not satisfied with desk-based evidence, they decided to embark on their own reconstruction. Their first-hand experience of the North Atlantic in summer bore out their initial conclusions: placid and pleasant days on the water showed that summertime winds and currents would not be serious obstacles to Viking voyages. Moreover, the Vikings had the knowledge to read clouds and winds as omens of weather to come in the following hours and days; given the short sailing distances between islands (with transit times of 25 to 38 hours), the Vikings’ ability to forecast short-term weather was sufficient for safe passage.

None of this is to say that North Atlantic transit was simple. Sagas report Viking ships that set out from port and were never seen again. Sailors experienced hafvilla (ie, bewilderment or confusion) owing to low and thick clouds, relying on clearing skies, currents, and wind directions to reorient themselves. It is entirely possible that the first Viking to reach North America, Bjarni Herjolfsson, only did so because of hafvilla and being blown off course when heading for Greenland.

However, the evidence overwhelmingly suggests that, in general, the Vikings did not venture blindly into hostile waters, contrary to popular belief. Instead, they were skilled sailors who set sail only when conditions were favourable. By the time the Vikings arrived in North America, they had extensive knowledge of the geography of the North Atlantic well, including the islands, the waters between, and the basics of basin regional climatology and meteorology.

For your own reconstruction of these journeys, did you sail in a modern vessel or a replicate knarr?

We sailed in a large modern vessel with stops in the Shetlands, Iceland, Greenland, and the Canadian Maritimes. This was a far cry from the accommodations on Viking knarrs, but sea state, wind, and cloudiness jibed with the regional climatological records of the modern era.

Did the Vikings leave any written or pictorial evidence of their travels? 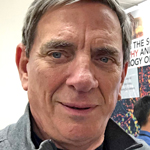 William E Doolittle has been on the faculty of the University of Texas at Austin since 1981. His research focuses on landscape transformations in the American Southwest and México, and pre-European trans-oceanic voyages. 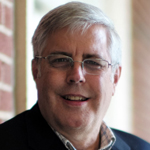 Stephen J Stadler has been on the faculty at Oklahoma State University since 1980. His research is in applied climatology with interests in wind power, human comfort, and the Vikings.

Using oceanic and climatic data, and documentary and empirical evidence, Professors Doolittle and Stadler challenge the current narrative regarding Vikings and their voyages in the North Atlantic Ocean.

William I Woods, Department of Geography and Atmospheric Science, University of Kansas