Engineering & Technology
Some social robots are assistants helping with tasks such as lifting, while others take on companion roles and simulate emotions. Dr Oliver Korn, Professor for Human Computer Interaction and Director of the Affective & Cognitive Institute at Offenburg University in Germany, discusses whether social robots should be able to replicate human emotions and explores ethical challenges arising from it. He examines various examples of social robots together with the results of an expert study into the desired future abilities and applications of both service and companion robots.

Social robots can interact with humans in both collaborative settings, such as shopping malls, and personal settings, performing tasks within domestic services and healthcare. Some social robots are assistants and just help with tasks such as lifting, while others take on companion roles and even simulate feelings.

Dr Oliver Korn, Full Professor for Human Computer Interaction (HCI) and Director of the Affective & Cognitive Institute at Offenburg University in Germany, researches assistive technologies, robotics and affective computing (i.e. emotions in HCI). Observing that social robots can incite both fascination and fear in humans he asks, “what abilities should social robots have and what should remain exclusive to humans?” 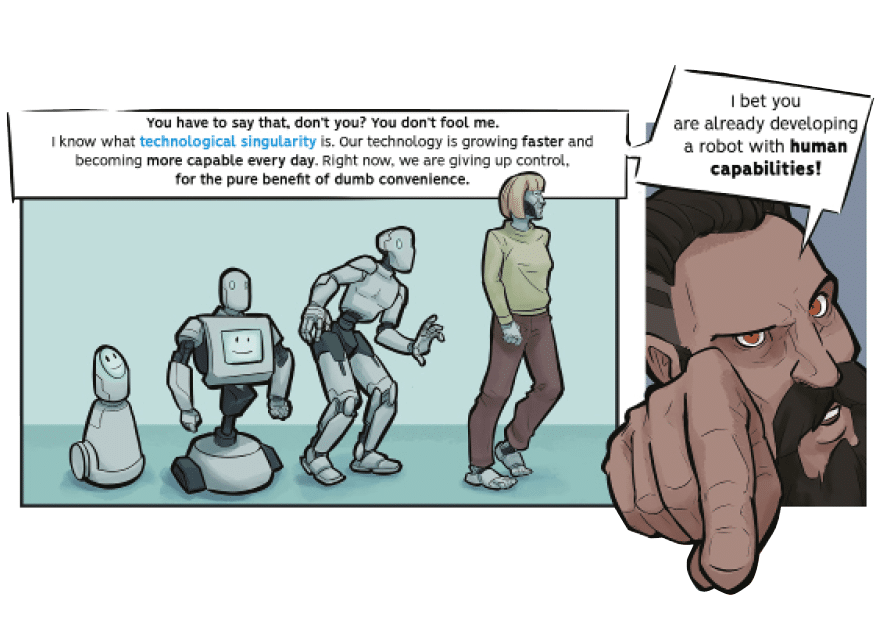 Ethical challenges
Korn describes how social robots, including those that provide only service functions such as assisting to lift elderly people, should appear harmless and friendly in order to reduce fear in the people they interact with. They are also required to respond to human behaviour and, if possible, react to human emotions, differentiating, for example, between the needs of a depressed patient and a healthy athlete recovering from a fracture.

He raises the question whether social robots should replicate human emotions, such as smiling, to alleviate nonverbal communication. One could argue that as the robot does not feel emotions, their simulation could be viewed as lying. Several scientists maintain that ‘ethically correct robots’ ought to be able to distinguish between right and wrong. However, are ethical decisions possible without the biological substrate of a human brain? Moreover, even if we could create emotion-sensing robots capable of applying ethical reasoning, do we really want them?

Automated devices with dubious talents
In order to provide a perspective on the future requirements for social robots, Korn examines their history. Since ancient times the creation of artificial beings links mechanics with the divine: a well-known example by the Roman poet Ovid (43BC – 17AD) is the tale of Pygmalion of Cyprus who creates a statue of an ideal female and then, after the goddess Venus brings the statue to life, treats it as his lover.

By the late 18th century, although the natural sciences were already established, automated machines with dubious talents were nevertheless accepted. A famous case is the success of Wolfgang von Kempelen’s chess playing automaton, called the ‘Mechanical Turk’: their tour through Europe and the United States, performing for the likes of Napoleon Bonaparte and Benjamin Franklin, is a brilliant example of society’s mindset at this time. Only later it was detected that the machine was a fake that actually housed a human chess master.

Still today, many people are fascinated by robots and automats and will credit them with physical and mental skills way beyond their actual capabilities.

Even if we could create emotion-sensing robots capable of applying ethical reasoning, do we really want them?

The French company Aldebaran Robotics developed the Nao Robot in 2006. While it looked like a toy, it could be programmed to mimic human behaviour. It was even trialled in human-robot interaction therapy with autistic children.

Paro, an artificial harp seal from Japan, has been supporting the therapy and care of elderly patients in hospitals and nursing homes since 2009. It responds to petting with sounds, body movements and opening and closing its eyes and has been shown to have positive effects on the activity of older people.

In 2015, the Japanese research institute Riken developed Robear to provide support for nursing home caregivers and patients. It provides the physical strength required to lift patients in and out of beds. Robear has a cartoon appearance that avoids the ‘uncanny valley’ dip in emotional response that characteristically occurs when we encounter a humanoid that is almost, but not quite human, therefore causing unease and discomfort for patients.

Korn also explores the use of robotics in the private homes of healthy people, such as Fraunhofer’s Care-O-bot, a mobile robot assistant designed to provide support within domestic environments. It can display different emotions on a screen integrated into its head.

The humanoid Pepper robot, in many ways a successor of Nao, analyses facial expressions and tone of voice in order to correspond with different emotions. While it is more often used as a marketing tool than as a companion robot, Pepper exemplifies the potential of future robotic platforms. 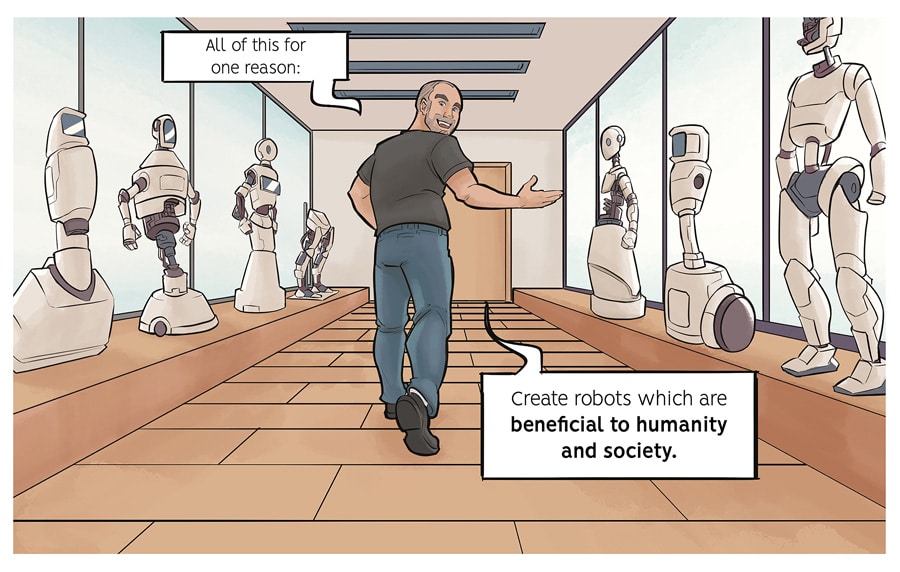 Another famous social robot is Sophia, a female humanoid developed by Hong Kong-based Hanson Robotics. It uses artificial intelligence (AI) to learn and adapt behaviours. Sophia’s responses, however, are in many cases pre-programmed and the AI just selects the most appropriate, creating the illusion of understanding with facial expressions that match the conversation. In 2017, Sophia was granted Saudi Arabian citizenship, thus becoming the first robot ever to receive a nationality. Korn links the audience’s fascination with Sophia to that of the Mechanical Turk, in that it is more illusion than actual ability.

The application of robots with emotional capabilities will have to be carefully guided by ethics and regulated by law.

This study combines elements of the Technology Acceptance Model (TAM), used to assess the acceptance of new technologies, with a Delphi study. Twenty experts with backgrounds in information science, health and gerontology were asked to rate potential features and make time predictions. The questions were designed to elicit the experts’ opinions regarding the tracking of patients’ emotions, the use of social robots in healthcare and other potential uses for social robots. The questionnaire included a Delphi section with predications on the introduction and widespread use of four future technologies: care robots, social robots sensing emotion in any setting, social robots sensing emotion in care and the use of implanted sensors. 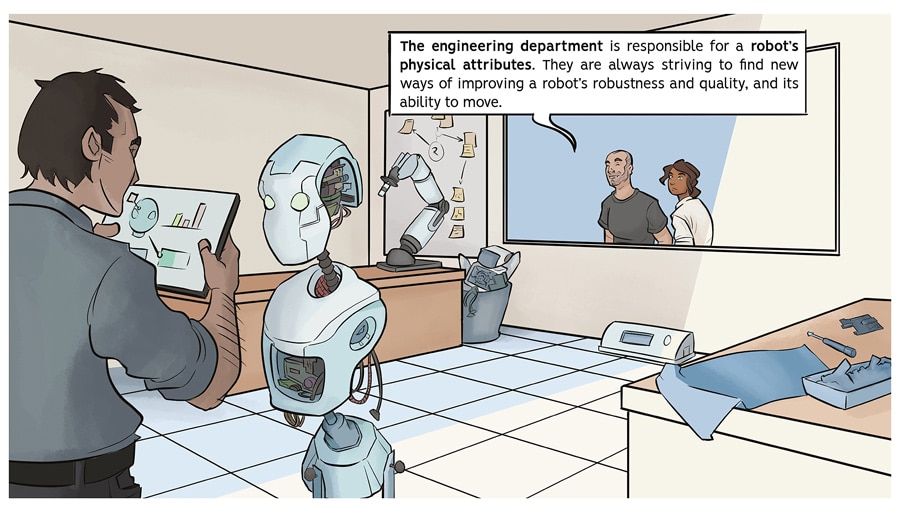 Study findings
The study revealed that the majority of experts felt that social robots will eventually address even the more sensitive societal areas such as emotional companionship. The experts predicted that all of the future technologies, including implanted sensors, would be fairly common by 2031. Comparing the experts’ optimistic time predictions with their scepticism concerning the application of social robots within society, it was apparent that they perceived technology to be moving faster than the required ethical discussions and adaptations of legal policy.

The results disclose that the experts consider that most of the technologies required for the social robots’ emotion sensing are already available. Referring to care robots, the experts approve health-related tasks like drawing blood and assisting in taking medicine, but they would prefer that nursing tasks, such as washing patients and putting them into bed, would be carried out by humans. Interestingly, the experts’ acceptance of employing emotional sensing within healthcare increased with the severity of the patient’s condition.

Outside of healthcare, familiarity appears to influence the acceptance of social robots. Health robots and military drones were deemed more ‘acceptable’ than either child companion robots for childless couples or sex robots. Furthermore, the acceptance of social robots seems to be inversely proportional to the level of face-to-face emotions involved.

Social robots comic
Korn and his research team at the Affective & Cognitive Institute are currently developing a comic. Underpinned by their research findings, it provides an innovative approach to inform the general public of future developments of social robotics in an entertaining way. Set within a detective story, various aspects of social robotics, ranging from real-life examples to the arguments of anti-robot activists, are presented in an engaging style. The comic is designed to appeal to audiences from school kids to university students and adults. 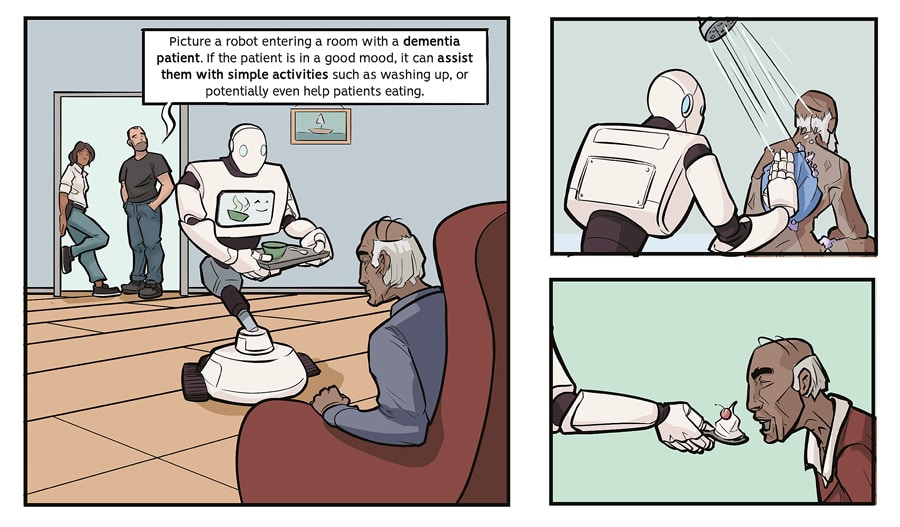 Concluding remarks
Korn explains that this research just provides a glimpse of the future of social robots. He stresses that even the experts’ opinions often were surprisingly varied. Society will dictate whether robotic assistants that can only clean or serve dinner will be enough. Personal services such as nursing and companionship that involve emotions will have to be carefully guided by ethics and regulated by law. The wide spectrum of social robots currently available demonstrates that we are on the verge of social robots becoming an everyday phenomenon.

What are your plans for future work in the field of social robotics?

<>We aim to continue our work on exploring the design space – using studies to determine which looks and abilities are adequate for social robots. We are currently working with ‘Wizard of Oz’ approaches, where human researchers make a robot behave cleverer than it actually is, similar to the Mechanical Turk or Sophia. This allows us to observe behaviour rather than opinions. 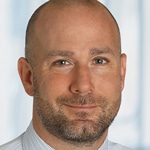 Oliver Korn is a Full Professor for Human Computer Interaction (HCI) and director of the Affective & Cognitive Institute (ACI) at Offenburg University in Germany. He also is a Senior Member of the Association for Computing Machinery (ACM), Professional Member of the Institute of Electrical and Electronics Engineers (IEEE) and certified Project Manager. His main areas of research are Assistive Technologies & Robotics, Affective Computing as well as Augmented, Virtual and Mixed Reality. In the ACI, he bundles these fields with an interdisciplinary research team. The overall vision is to enrich environments by intuitive interfaces and ‘intelligent’ context-aware assistants, which adapt to both the users and the context.

Prof Oliver Korn aims to shed light on how social robots will work within healthcare and domestic service settings.

This research was initiated within the Forum of the European Active and Assisted Living Programme (AAL). Furthermore, it is related to the project “Perspectives on Social Robots” within AGYA (Arab German Young Academy of Sciences and Humanities). Oliver Korn and co-author Christian Fron are AGYA members. AGYA is funded by the German Federal Ministry of Education and Research.

The future of product creation is open and community-based
Engineering & Technology
Read This Article
IRAND: Helping to preserve children’s and youth drawings of the 20th century
Arts & Humanities
Read This Article