X-rays are excellent tools for exploring the structure of matter and molecules. Professor Szymon Suckewer and his group at Princeton University, alongside Professors Olga Kocharovskaya, Marlan Scully and Alexei Sokolov of Texas A&M University, have developed a technology capable of producing X-rays, but which can fit into a standard university lab – even onto a table top. This offers new accessibility to experiments that need sufficiently high energy photons (above 30 eV), and this work marks the culmination of decades of vital research undertaken by Professor Suckewer in the field of soft X-ray lasers.

Experimental techniques that use X-ray radiation have changed our perspective on the structure and function of molecules. It was X-ray crystallography that gave us the first experimental proof of the double helix structure of DNA. X-ray imaging approaches are now capable of resolving the structures of single viruses or of tracking how the atoms in a molecule interact and move in a chemical reaction.

Opening a window into the life of a biological cell
Much like using X-ray imaging to look for broken bones in people, using X-rays to look at chemical and biological structures works very well. The reason that high energy – or ‘hard’ – X-rays are good for looking at structures such as bone is because all other tissue and fluids are mostly transparent to such X-rays. This means that the dense bone structures are the only regions that absorb the X-rays so if an X-ray-sensitive film is placed behind the patient, these regions remain unexposed and dark.

‘Soft’ X-rays have significantly lower photon energies than ‘hard’ X-rays but can still be incredibly useful for X-ray imaging. This is because most organic elements – such as carbon, nitrogen, and oxygen – have characteristic signals in this energy range. These are often considered the elements of life, as nearly all biological molecules are composed of several of these elements.

There is a region of the electromagnetic spectrum known as the ‘water window’ – between 4.40 to 2.33nm.

Most biological species and tissue samples also contain a large amount of water – another essential ingredient for life. A water molecule is composed of an oxygen atom and two hydrogens, and while the hydrogens are not particularly problematic, the presence of the oxygen can make it challenging to measure biological samples. This is because the concentrations of water in a biological sample are typically very high relative to the amount of protein or enzymes present. If the X-rays are absorbed or scattered by the water, this makes it challenging to investigate the biological species of interest as the signal is swamped by the water background.

However, there is a region of the electromagnetic spectrum known as the ‘water window’ – between 4.40 and 2.33nm (ie, 282 to 533 eV). This region gets its name from the fact that X-rays in this wavelength range are practically not absorbed by the water present in a sample, but the carbon and nitrogen (and potentially other elements) do absorb. This means that if you wanted to design an X-ray microscope to look at samples, this would be the ideal energy range to operate in. The challenge, however, is managing to generate short pulses of bright X-ray photons in this energy range in a laboratory environment. While it is possible to do this at the large facilities known as free-electron lasers, these set-ups are often a few kilometres in size and are incredibly expensive to build and maintain. And as free-electron lasers are often only capable of providing light for one experiment at a time, it can be very difficult to get access to them.

The X-ray laser problem is fundamentally challenging
X-ray lasers are hard to make, for a very fundamental reason: atoms will provide X-ray laser gain only for a few femtoseconds, and then lose their energy to spontaneous emission. A femtosecond is such a short unit of time that one femtosecond = 10-15 seconds – is the time for light to cross only about 0.3𝜇m, a distance comparable to the size of a virus particle. One way to get to this ultra-fast timescale and to achieve this short-lived gain is to pump the atoms/ions with femtosecond laser pulses (from another, typically infrared, laser). This kind of a pump laser provides instantaneous power that is several times larger than the total global production of electric power – turned on for a very, very short time. In order to harness this enormous power and make it stay focused for a longer distance, a ‘plasma channel’ needs to be created, to guide the pump (infrared) laser light.

Professor Simon Suckewer and his group at Princeton University have done just that: they have produced a plasma channel for the pump pulse, blasted (carbon) atoms with the enormous pump power, and measured the resultant X-ray lasing. The combined Princeton–Texas A&M team has developed important new approaches, allowing us to generate X-rays with energies in the ‘water window’ in a set-up that can fit in a usual university-type laboratory. To have achieved this with a device that can fit on a table-top, rather than requiring an entire building, is a huge step forward. This is a remarkable step towards making X-ray microscopy a readily accessible technique and the production of ultrafast soft X-ray pulses that do not require large-scale, expensive infrastructure.

This is a big step towards making X-ray microscopy a readily accessible technique and the production of ultrafast X-ray pulses that do not require huge amounts of infrastructure.

Constructing a camera to film the ultrafast world
All chemical and biological molecules are in constant motion. Even at room temperature in an unperturbed system, molecules are in a perpetual dance of wiggling bonds and shifting atoms. This motion is further modified when the system undergoes some kind of external stimulus such as a change in temperature, a chemical reaction, or some interaction with light.

Often, the motion in a molecule is driven by the movement of electrons. When the electrons in a system are perturbed for any reason, this then induces the slower motion of the heavier, sluggish nuclei. Electron motion can be very fast, happening on an attosecond (10-18 seconds) timescale. Even the relatively sluggish nuclei can move in tens of femtoseconds. For scientists such as Suckewer to capture on film this intricate motion of electrons and nuclei, they need a camera even faster than this motion. Their cameras of choice are laser pulses that are just attoseconds or femtoseconds in duration. Suckewer’s new scheme for Soft XRL is capable of generating X-rays of this pulse duration.

The additional challenge when producing such short X-ray pulses is making enough photons with which to do meaningful experiments. While there are techniques such as high-harmonic generation that can generate soft X-rays using high-power driving lasers, so far it has been challenging for lab-based technologies to compete with free-electron lasers for the amount of X-ray photons that can be made per pulse. While Suckewer’s X-ray laser is not yet as bright and energetic as some of the free-electron sources available, its footprint is much more compact and is already producing quite high-pulse energies with a lot of room for future improvements and amplification.

The advantage of being able to generate attosecond pulses is not just in being able to perform ultrafast experiments and track electronic and nuclear motion, but also in the fact that the shorter a pulse is, the broader its spectrum. These extremely broad band pulses are ideal for near-surface microscopy as they can probe multiple organic elements simultaneously and enhance the amount of information that could be recorded in a single microscopy image.

Suckewer and his team are excited to see how their new breakthrough will accelerate the search for a ‘user-friendly’ table-top X-ray laser. This discovery may open the way for future developments of technology moving towards creating compact soft X-ray microscopes that can provide high-resolution images of live cells in their natural environment – without the need for added markers or stains.

What are the technical challenges when it comes to making X-ray lasers commonplace in the lab?

There were a number of technical challenges during the many years of soft X-ray laser research and development, and during its adaptation for high resolution microscopy of live bio-cells.

The number one challenge was to demonstrate laser action in the ‘water window’ at 4.03nm with high gain via fast recombination process; here difficulties were related to stimulated and spontaneous radiations from various transitions in carbon ions, which accompany the 4.03nm lasing line. The next step was to find optimal conditions for the 4.03nm lasing via computer simulations and experimental trials; then, the issue was not to break a very thin microscope window nor to kill cells, but to have sufficient number of ~ 30 eV photons to get high-resolution and high-contrast images of live cells. 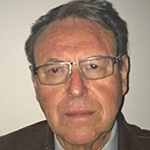 Szymon Suckewer, PhD and DSc, is a Professor Emeritus and Senior Scholar in Mechanical and Aerospace Engineering, and Director of the Laboratory of X-Ray Laser and Ultra-Intensive Femtosecond Lasers at Princeton University. He works on development and application of X-ray lasers, as well as on medical applications of ultra-short-pulse lasers. His research was recognised by many awards such as Schawlow Prize and Lamb Medal, and election to the National Academy of Inventors.

The researchers have developed a new type of compact (‘table-top’) soft x-ray laser (SXRL) at 4.03nm wavelength, in the so-called ‘water window’.

Thanks to the National Science Foundation for providing funding, and making it possible to conduct the research at Princeton and at Texas A&M Universities.