Earth & Environment
In the Alaskan Arctic, permafrost coastal systems are eroding at rates more than double those of the past. Rampant environmental change is putting new pressures on Arctic coastal dynamics, with the loss of landscapes, cultural heritage, infrastructure, and communities. Dr Benjamin Jones (Water and Environmental Research Center, Institute of Northern Engineering, University of Alaska Fairbanks) and Professor Hugues Lantuit (Alfred Wegener Institute Helmholtz Centre for Polar and Marine Research, Germany) are working with scientists and stakeholders from across Arctic nations to develop the Permafrost Coastal Systems Network (PerCS-Net), a forum for reinvigorated research, knowledge integration, and management of environmental change at the fringes of the Arctic.

High in the Alaskan Arctic, Drew Point, a bluff along the Beaufort Sea coast, is eroding away at an unprecedented rate, losing on average more than 17 m per year over the last decade. This level of erosion, more than double past rates, highlights an ever-increasing issue for Arctic landscapes, the degradation and loss of permafrost coastal systems, a system that encompasses nearly 30 % of Earth’s coastlines.

Increasingly rampant forces of environmental change, both local (e.g., land-use change) and global (e.g., climate change), are putting new pressures on permafrost coastal systems and communities that live upon them. Arctic landscapes are sensitive to Arctic Ocean–land linkages and permafrost degradation, owing to permafrost thaw and land subsidence, rising sea levels, reductions in sea ice cover and the resulting increase in open water, and increasingly frequent and impactful storms. As a result, coastal landscapes are irrevocably changing. Aside from environmental impacts, this presents a logistical challenge to the many human interests operating along the coastlines, including those involved in traditional lifestyles, industrial, and commercial activities.

A new study by Dr Benjamin Jones of the Water and Environmental Research Center (WERC) at the University of Alaska Fairbanks (UAF), which focused on 9 km of coastline at Drew Point, is one of the first to use satellite observations with high spatial (< 1 m) and temporal (near-annual) resolution to link decadal-scale erosion with environmental change. Until now, poor resolution and large data gaps have made this impossible. Critically, one of the most important findings is the sheer complexity of the issue. Coastal responses to environmental change vary significantly and there are fears that we are failing to identify and address the environmental forcing factors and long-term effects of permafrost degradation and the multitude of interactions at the terrestrial-marine interface. For example, questions remain as to the relative roles of long-term processes vs. extreme weather events, and as to whether there are factors at play that have not yet been considered. 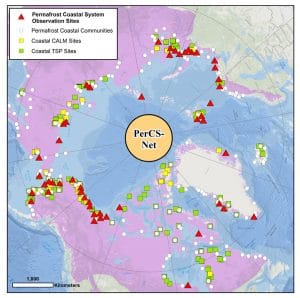 These new and evolving environmental conditions impact profoundly on planning and decision-making, threaten the preservation of cultural heritage, and pose challenges to national security for those nations that share the Arctic Ocean perimeter. Improving our understanding and management of such complex changes, which cross national borders, encompass many and diverse fields of study, and impact on a wide array of stakeholders, requires a careful and coordinated approach.

Dr Jones and his colleague Prof Hugues Lantuit (Alfred Wegener Institute Helmholtz Centre for Polar and Marine Research, Germany) are taking up this grand challenge. Experts in regional permafrost landscape dynamics, they are working together with scientists and other stakeholders from across the Arctic region and indeed the world to develop a new co-ordinated network for the understanding and management of Arctic permafrost coastal systems.

PerCS-Net will tie together some 20 existing networks from Russia, Poland, Germany, Norway, Denmark, Canada and the United States.

Understanding permafrost coastal systems: An international effort
The coastline of the Arctic extends nearly 200,000 km, passing through eight countries/territories (the United States, Canada, Greenland, Iceland, Finland, Sweden, Norway, and Russia). Since 1999, over 20 different networks of scientists and organisations that are directly or indirectly related to permafrost coastal systems have been formed around the world; many have been cross-disciplinary in nature. These often national networks provide information and support for coastal permafrost management, and many encompass experts from across fields of science, engineering, and society, providing critical knowledge of national permafrost dynamics.

For example, in Russia, the Russian Arctic Coastal Dynamics network is focused on understanding arctic coastal dynamics in Siberia; the Wroclaw Polar Station of the Foundation for Polish Sciences performs integrated research at sites across Svalbard, Greenland, and Iceland; the University of Copenhagen Center for Permafrost is focused on arctic coastal environments in Greenland. In Germany, a project funded by the European Union called Nunataryuk is focused on determining the impacts of thawing coastal and subsea permafrost on the global climate. In Norway, the Sustainable Arctic Marine and Coastal Technology Center is focused on work packages for coastal technology and material modelling to develop tools to assess infrastructure reliability in the Arctic coastal zone. In Canada, the Geological Survey is leading a Coastal Permafrost United Nations Environmental Programme Rapid Resource Assessment to explore the unique processes and interconnections across terrestrial and nearshore marine permafrost environments. In the USA, there are no less than 13 different networks focused on arctic coastal issues, permafrost, and/or related issues; many are funded by the National Science Foundation (e.g., the Permafrost Coastal Erosion RCN, Arctic COAST RCN, Beaufort Lagoons LTER, and the Permafrost Discovery Gateway), while others are state funded (e.g., the Alaska DGGS Coastal Hazards Program), university supported (e.g., the Arctic Coastal Geoscience Lab of UAF), or federally funded and/or affiliated (e.g., U.S. Geological Survey, NOAA, and the U.S. Army Corps Cold Regions Research and Engineering Laboratory, Sandia and Los Alamos National Labs, and the National Park Service.

However, Arctic permafrost resources transcend borders, and with the increasingly rapid pace of environmental and social change, there is ever greater need for international collaboration. In particular, there is a need for a robust intellectual framework to address critical environmental, social, and engineering challenges; such a framework must be based on knowledge sharing from all sides of national, political, cultural, and disciplinary borders. While some past and existing networks have attempted international cooperation and sharing of data, observations, and expertise, the long-term sustainability of these efforts has fallen short.

Along with colleagues and collaborators from around the world, Jones and Lantuit are launching PerCS-Net, an international network of experts and stakeholders from the permafrost coastal system community. Instead of starting from scratch, the team is harnessing existing networks and linkages, many stretching back decades through both formal and informal collaborations and agreements, to create an International ‘Network of Networks’. In sum, PerCS-Net will tie together some 20 existing networks from Canada, Denmark, Germany, Norway, Poland, Russia, and the United States.

PerCS-Net: An international ‘network of networks’
Setting up the Permafrost Coastal Systems Network (PerCS-Net) represents a five-year project that is supported by the U.S. National Science Foundation Accelerating Research Through International Network-to-Network Collaborations (AccelNet) program. Initially, the network will comprise some 100 individuals from 20 collaborating networks and organisations. The individuals involved represent universities, research institutes, and national/government laboratories and departments; they come from within the lead institution (UAF), and across North America and Europe. However, despite the difference in geography and focus, they are united in their goal of a network designed to accelerate scientific discovery, forge international connections, and facilitate knowledge transfer at the interface of permafrost coastal systems.

PerCS-Net is a bold new project that aims to address one of the many grand challenges we face in a changing world.

It is expected that the network will:

Achieving these goals goes beyond basic scientific research, focusing primarily on the development of strong network structures, data visualisation, and education programmes; it is these factors that will be the focus of many individuals working within the PerCS-Net project.

The initiation of PerCS-Net will proceed in four stages over five years. The first year, Phase 1, involves network initiation and planning, and in particular the integration of existing networks through the development of scientific collaborations and the formalisation of agreements between different stakeholders at regional and local levels. Phase 2, envisaged to take three years, will involve the full-scale initiation of the network and the development of products associated with the project objectives. Phase 3, network monitoring and assessment, will evaluate progress and provide feedback for network improvement. The final stage will focus on ensuring network sustainability by supporting and enabling network members to secure funding for ongoing collaborative scientific research and other network activities. It is important to Dr Jones and Dr Lantuit that this funding is sought in collaboration with Arctic coastal communities, ensuring critical information exchange and diversified participation. The project will also develop an Education and Human Resources (EHR) strategic framework to ensure that knowledge transfer is not just among scientists, but also filters down through undergraduate and school-aged students, and to underrepresented groups such as indigenous communities.

PerCS-Net is a bold new project that aims to address one of the many critical issues we face in a changing world; with its focus on collaborative international scientific research, institutional capacity building, education at all levels, and broadening participation. The success of PerCS-Net will provide a template for addressing other highly complex environmental and social dilemmas facing humanity. To find out more visit www.permafrostcoasts.org

Why is it important to bring together the international permafrost coastal systems research community?

Dr Benjamin Jones: A high proportion of Arctic residents live on or near coastlines, and many derive their livelihood from terrestrial and nearshore marine resources. Permafrost coastal systems are one of the most rapidly changing places on Earth, and no place is more representative of the challenges being faced at the intersection between natural, social, and built systems than the Arctic. Future permafrost coastal system dynamics will challenge conventional wisdom as the system enters a new state impacting human decision making and adaptation planning, impacts to cultural heritage resources, and likely resulting in unforeseen challenges that require knowledge sharing across disciplines and borders.

What are the key questions that need to be addressed to provide long-term knowledge transfer and sustainability?

Dr Benjamin Jones: Questions focused on how and to what extent permafrost coastal systems are changing, which factors are responsible for the observed changes and how similar or different are these factors and patterns of change across the Arctic, what are the impacts to society, infrastructure, ecosystems, and human health, and can we develop tools and resources to help plan for future permafrost coastal systems? 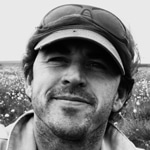 Benjamin M. Jones is a Research Professor at the University of Alaska Fairbanks. He specialises in observing, understanding, and interpreting present as well as past permafrost region landscape dynamics. He has conducted research on permafrost coasts since 2001 and is Principal Investigator of the NSF-Funded Permafrost Coastal Systems Network (PerCS-Net).

Hugues Lantuit is a Professor at the Alfred Wegener Institute. His research is primarily focused on the impacts of climate change on Arctic permafrost coasts. He has been conducting research on this topic since 2003 and is the leader of the EU2020 Nunataryuk project.

The Permafrost Coastal Systems Network is a holistic and transdisciplinary approach that aims to investigate the physical and socio-economic impacts of collapsing coastlines in the Arctic nearshore zone.