Physical Sciences
Transmission electron microscopy may have brought about some of the most cutting-edge research into materials physics, but the technique doesn’t come without its limitations. In his research, Dr Jinfeng Yang at Osaka University in Japan aims to further improve the capabilities of the most powerful microscopes ever made, by accelerating the pulsed beams of electrons they produce to relativistic speeds. Through several recent experiments, he and his team have shown that their updated technique of ‘ultrafast electron microscopy’ can image atomic-scale processes directly as they unfold.

Physicists have been measuring the properties of materials for many centuries. For most of this time, such research has involved manipulating samples in a wide variety of ways: from poking and stretching, to squeezing and crushing. Many useful physical laws have been constructed through measurements of how materials respond in these experiments, but to truly understand what is going on, more sophisticated apparatus would be needed.

In reality, the material properties we observe on macroscopic scales result from the countless interactions which take place between individual atoms, on timescales as fast as quadrillionths of a second – or ‘femtoseconds.’ To study processes on such intricate scales, physicists currently use the technique of time-resolved transmission electron microscopy (TEM), which forms images of samples by passing pulsed electron beams through them. The technology has seen significant advances in recent years, but in their research, Dr Yang and his colleagues aim to push its capabilities even further.

The inner workings of TEM
To gather images of microscopic samples, TEMs rely upon three principal components: an electron gun, a condenser system, and an imaging system. Within the first of these parts, electrons originating from heated metal filaments or cold field-emission cathodes are accelerated towards an aperture-shaped electrode by a strong electric field, produced by a direct current. Provided the voltage between the two electrodes is highly stable, the electrons will then pass through the hole in the electrode, completing the ‘gun’ component. Next, the electrons pass through a series of condenser lenses, which use magnetic fields to precisely control the intensity of the beam, and its illumination angle on the sample. 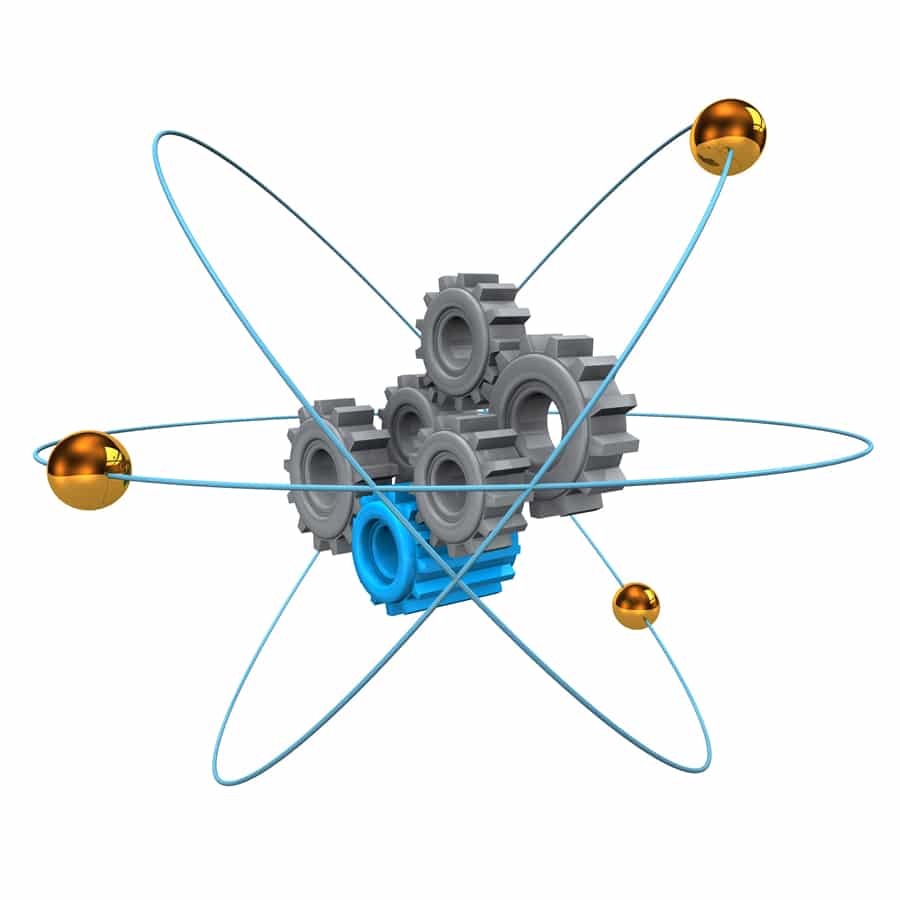 After passing through the sample, the altered electron beam is then magnified many times by a series of objective lenses, eventually reaching macroscopic scales. Finally, the electrons interact with a device that converts them into photons of visible light, producing a final image of the sample. Since the wavelengths of electrons, as described by quantum mechanics, are far smaller than those of visible light, TEM allows for 3D images with far higher resolutions than traditional light microscopes, enabling researchers to directly obtain images of individual atoms and molecules.

Challenges with femtosecond atomic-scale imaging
So far, this setup has allowed researchers to study systems as small as individual atoms, but significant limitations remain. The first major shortcoming with time-resolved TEM is the relatively long duration of the electron beams it produces in single-shot experiments, which are used to measure molecular processes on the shortest possible timescales. In addition, beam multi-scattering within samples is currently limiting the spatial resolution of the technique. In his research, Dr Yang proposes that each of these issues could be solved through the use of relativistic electron beams. Unlike the beams used in time-resolved TEM, these electrons would travel at significant fractions of the speed of light; so fast that the effects described by Einstein’s theory of general relativity become relevant.

“Femtosecond atomic-scale imaging is the most challenging subject in materials science,” explains Dr Yang. “In our research, we aim to develop an innovative, relativistic ultrafast electron microscope (UEM) with an ultimate temporal-spatial resolution of 10 femtoseconds (fs) and 1 angstrom. Then, we aim to realise the visualisation of structural dynamics in real time, and on atomic scales.” Since setting out these goals in a 2013 study, Dr Yang’s team has made significant strides towards the widespread realisation of UEM devices.

The radio-frequency gun
The electron gun was the first element addressed by the team in their updated setup. In conventional TEM, the component is limited because of its use of direct current, which restricts its controllability, as well as the low energies of up to 200 kilo-electronvolts (keV). They can produce femtosecond electron pulses, but the pulses only have relatively low electron numbers per pulse – typically a maximum of several thousand – which is not large enough for the single-shot experiments required to measure irreversible processes on femtosecond timescales.

To solve this problem, Dr Yang and his colleagues have developed an updated electron gun, which accelerates the electrons using radio frequencies instead of direct current. This approach subjects beams to electric fields around 10 times stronger, meaning they can be quickly accelerated to the relativistic energies required for UEM. “A radio-frequency (RF) acceleration-based electron gun has been developed to successfully generate a high-current femtosecond-pulsed electron beam with an energy of 3 MeV, and a pulse duration of 100 femtoseconds,” Dr Yang summarises. With this technological breakthrough, the researchers were then able to move on to realising the practical side of their goal.

Creating images with UEM
To achieve actual images of atomic-scale structures on ultrafast timescales, the researchers have developed more advanced lenses which, when in combination with their improved electron gun, can better concentrate the electron beam onto a sample. “Using the RF gun, we have developed the world’s first prototype of relativistic UEM,” Dr Yang describes. “We succeeded in observing UEM images of gold nanoparticles and polystyrene particles with 3 MeV femtosecond electron pulses. At a low-magnification observation, like in the observation of microcrystals, single-shot imaging with the relativistic femtosecond electron pulse is achievable.”

With such advanced capabilities of single-shot imaging, the researchers describe how UEM could be used to directly image the irreversible processes in materials as they transition from solids to liquids or from liquids to solids. In addition, it would provide unprecedented opportunities to view the dynamics of individual molecules in biological systems and chemical reactions in real time. 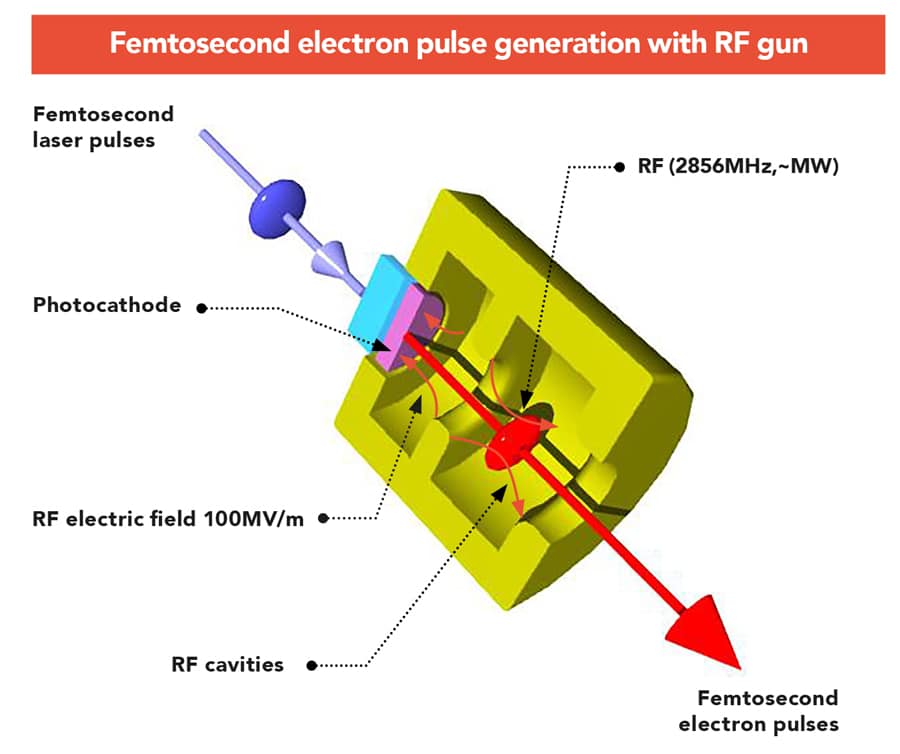 Electron diffraction patterns
Direct images of atomic or molecular structures aren’t the only desirable outcome of UEM. Perhaps even more fascinating physical properties can be gathered thanks to the quantum nature of electrons themselves. Since electrons are quantum particles, they can be described as both particles and waves. This means when they pass through a small gap, they will diffract just like a macroscopic wave. When measuring a crystalline sample, the elastically scattered electrons contribute in typical diffraction patterns. The diffraction patterns are used to obtain quantitative data including atomic structures, orientation relationship, and crystal defects in materials.

Through this ability to obtain diffraction patterns on such short timescales, the team was finally able to directly study the ways in which ultrafast physical processes unfold.

Thanks to this effect, Dr Yang’s team was able to use UEM to directly measure the structural dynamics of crystalline materials. “In our ultrafast electron diffraction (UED) study, we succeeded in the acquisition of high-quality high-resolution diffraction patterns with both single shot and time-resolved experiments, with an excellent temporal resolution of 180 fs,” Dr Yang describes.

Through this ability to obtain diffraction patterns on such short timescales, the team was finally able to directly study the ways in which ultrafast physical processes unfold. “This technique has been used successfully to observe the ultrafast dynamics of various photo-induced phase transitions in materials, including the photo-excited melting dynamics in a single crystal gold nanofilm,” continues Dr Yang. “This was obtained by the single-shot UED measurement with a 3 MeV and 90 fs electron pulse.” With the success of these diffraction experiments, Dr Yang’s team has made significant progress towards achieving the goals they first set out in 2013.

Advancing materials physics
Their innovative redesign of the electron gun has allowed Dr Yang and his colleagues to demonstrate for the first time that nanoscale imaging need not be limited by the shortcomings of time-resolved TEM. By accelerating electrons to relativistic speeds, both diffraction patterns and direct images of samples can be obtained on atomic spatial scales, and on almost unimaginably short timescales. With further research, the technique of relativistic UEM could become a staple of materials physics labs, allowing researchers in the future to make reliable measurements of highly intricate biological and chemical systems.

What are you most proud of in your work? 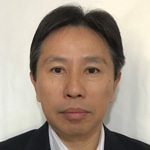 Professor Yang has worked on the generation and applications of high-brightness femtosecond/picosecond pulsed electron beams in the particle accelerator field over the twenty years. His current research is concerned with the development of ultrafast electron diffraction/microscopy with relativistic femtosecond electron pulses and the study of ultrafast phenomena including structural dynamics and chemical/biochemical reactions.

Dr Jinfeng Yang has dedicated his work to the development of ultrafast electron microscopy.