Health & Medicine
For those suffering from mental health or behavioural issues, there are a range of non-medical, non-talk based therapeutic options available. Perhaps one of the most interesting of these is equine-assisted interventions, which involve the interaction of humans and horses. The mechanisms underpinning how this works are little known and are the research focus of Professor Ann Hemingway and colleagues at Bournemouth University. In their pilot study they show that learning horsemanship skills and interacting with a horse causes emotional arousal and has the potential to facilitate positive behaviour change.

Equine assisted interventions (EAIs) are gaining in popularity and are used to assist those with behavioural, mental health and physical health related issues.

An evidence-based approach?
The use of these interventions has been growing in recent years and has sparked research interest from the scientific community. Studies have been conducted on the impact of EAIs and have shown some positive results for people with a range of mental health issues, as well as vulnerable individuals and those with learning disabilities. However, reviews have highlighted limitations in research design, and a lack of evidence of a clear causal link between the intervention and outcomes.

The mechanism underlying any causal link has not been well studied, but there have been some positive results. A study by Yoo et al. looking at the effects of an EAI on ADHD found activation in brain regions related to behavioural inhibition: a problem for those with ADHD. A second study by Naber et al. reported reductions in cortisol (a hormone associated with stress) in participants post-intervention.

How does it work?
Emotion is thought to be key to the positive results of EAIs, and a growing body of literature points towards emotion as an important contributor to learning. However, this has not been tested in real-world applications specifically focused on behaviour change. In a recent pilot study, Ann Hemingway and colleagues at Bournemouth University explored the possibility that emotional learning underpins the positive outcomes seen in EAIs.

The intervention used in the study is defined as a behavioural intervention assisted by horses rather than a therapy. Participants learn level 1 horsemanship skills usually over a ten-hour period with specially trained instructors. This involves playing a number of unmounted games with the horses and inviting them to respond to requests. The games are designed to establish communication and trust between human and horse.

The course is run by the charity TheHorseCourse which is based in Dorset, with additional centres in Barnet (North London), Gloucester, Surrey and Sussex. The Dorset centre provides the program to 150-200 people each year. Participants are by referral only, from Schools & Pupil Referral Units, Social Services, NHS Mental Health Services, Troubled Families, Offender Services and other specialist agencies. Participants have multiple problems which may include:

The charity has a clearly designed intervention which works well for research purposes through the type and clarity of horsemanship taught (Parelli Natural Horsemanship), and the consistency of coaching and facilitation undertaken (based on a theory of change). 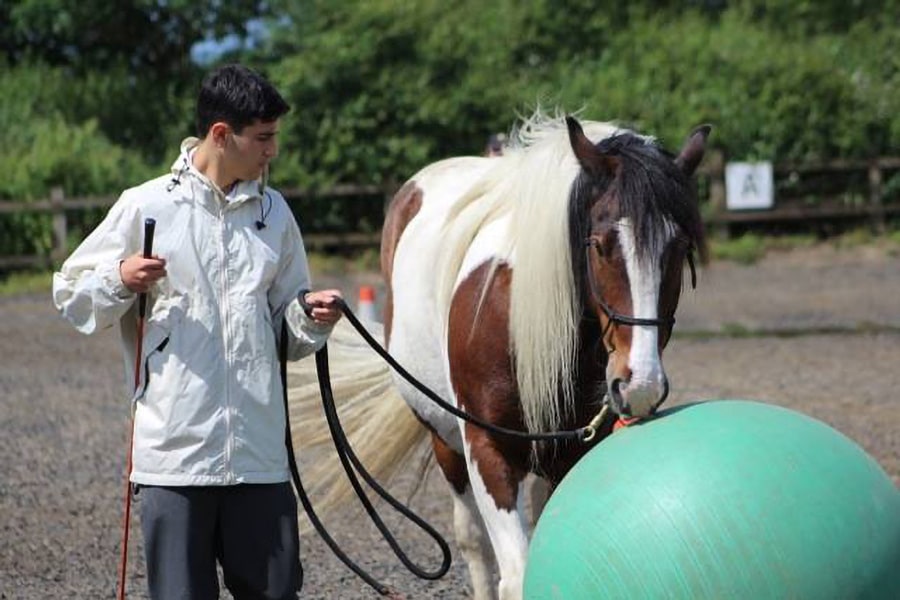 An innovative pilot design
In the pilot study, nine university students (three male and six female) undertook a shortened half hour version of the EAI. In order to explore the relationship between emotions and learning, the researchers used Skin Conductivity Response (SCR) as a physical measure of arousal. SCR is a technique that’s been used extensively in understanding the role of emotion in decision making, for example by Lo et al in understanding just how rational financial markets really are.

Measurable emotional changes were experienced by the students during only a short half-hour session.

During video playback, and while the SCR was being recorded, the researchers also conducted detailed interviews. These were phenomenological in approach, meaning they focused on the participants’ experiences, avoiding biases or preconceived assumptions. Researchers used open-ended prompts to allow participants to make descriptions based on their own experiences. Transcripts were later analysed to generate themes such as “confusion”, “feeling proud”, and “connections”.

Triangulating the results
Researchers were able to synchronise data collected from the three methods described above, to show at any given moment during the intervention a full spectrum of what was occurring for the participants: emotionally through SCR, behaviourally through video, and consciously through phenomenological interviews. 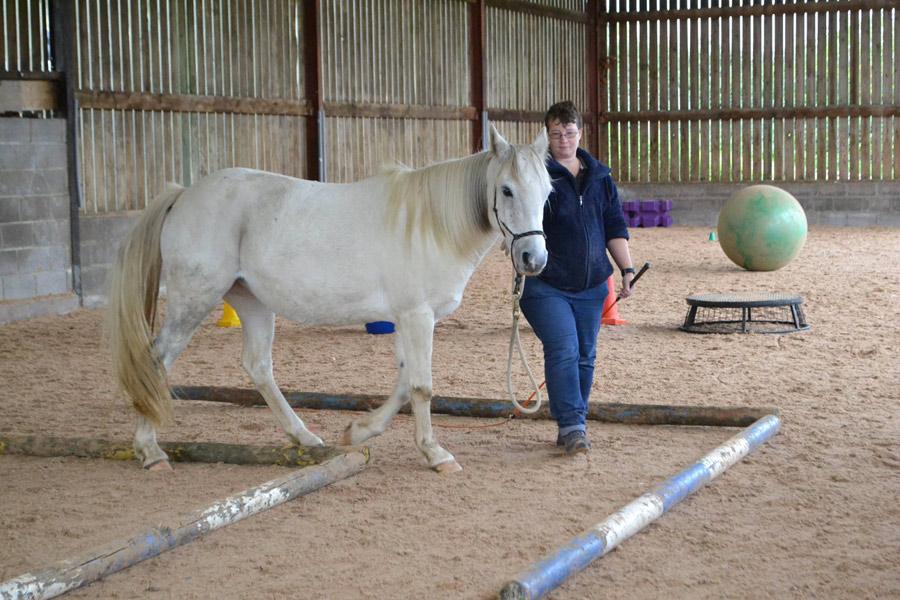 As expected, results showed that SCR was activated by learning to ask the horse to do something. Interestingly, analysis of the interview findings suggested that participants were not consistently aware of their own emotional arousal; when watching the video playback some participants expressed confusion in relation to the moments when the SCR indicated this. It was also stated by all participants that by the second half of their session with the horse they started to feel calmness, happiness and achievement, and ended the intervention with an overall positive mood. The combination of these findings suggests, as put forward by the research team, that learning occurs initially through our emotions and bodies rather than cognitively, and that cognitive recognition of changes may occur later. The researchers note that the sample size in this pilot study was very small, and that larger groups would be needed to properly understand the extent to which participants are aware of emotional arousal.

Positive impact on behaviour
Thanks to the rich data collected through the phenomenological interviews, the research has demonstrated interesting insights into the emotional journey that takes place during various elements of an EAI. Further work by Hemingway is looking at evaluating the particular EAI used in the pilot study which has already been shown to have a potentially positive impact on behaviour and one-year reoffending rates in young men incarcerated in a young offender institute. The team have also analysed before and after data on young people’s behaviour (ages 8-18) which has shown significant improvements in problem behaviours after the intervention.

Participants play a number of games with the horses, and invite them to respond to requests.

The researchers speculate that one of the reasons for the success of EAIs is the nature of the horse as a prey animal. They propose that the skills required to be learnt in order to interact successfully with such an animal may be what facilitates the calmness and control of behaviour often seen post-intervention. At the start of the session participants expressed feelings of anxiety, fear and nervousness as a result of being in the presence of such a large and unpredictable animal. The researchers suggest that these feelings may stimulate focus on finding a way to successfully communicate and build rapport with the horse, leading to feelings of power and calmness. Furthermore, this positive response to negative emotional arousal may offer an opportunity to break previous bad habits developed to deal with such emotions.

All is calm
The findings of the pilot study are reflected in the outcomes for people referred to the course for behavioural and mental health issues, the most consistent of which is calmness. This then directly translates into engagement with education and improved relationships, with social workers reporting rapid and effective changes after the intervention. The feelings of calmness experienced by participants are not unlike those that come about from yoga and mindfulness, indeed the intervention used in the pilot study has been described as “mindfulness in action”.

Practical application of emotional learning
The research conducted by Ann Hemingway and colleagues was a small sample pilot study, but it lends support to the model being used by the charity: emotional changes were achieved by the students during only a short half-hour session. The results also have practical applications for those working with children or adults for whom “talk” based interventions are not working. An understanding of emotional learning and how it can be brought about may be beneficial for those working in mental health, social care and education. The methodology used can also be applied to academic disciplines such as psychology, nursing and public health, offering a way to examine simultaneously emotional and physiological responses to behavioural interventions.

Of course, the study does raise several questions: Does learning through emotion enhance attempts to change behaviour? Does it only work in challenging situations? Would the findings be replicated in interventions with other species such as dogs? Research in this exciting field is in the early stages and further work is needed to understand the mechanism of emotional learning, when it occurs and its potential benefits.

There is already a body of literature suggesting that simple interaction with ‘therapy animals’ such as dogs and cats is beneficial to those with mental health issues and learning disabilities. To what extent do you think that the more complex and costly EAI model provides benefits beyond this, and are there plans to compare the two?

<> Yes we are planning to bid for funding this year to compare canine and equine assisted interventions. Horses are inevitably more expensive to keep and therefore provide assisted interventions with. However, through our work so far we are suggesting that the horse may offer something different in its interaction with humans as it is a prey animal whereas a dog is a predator and therefore more similar to humans as hunter gatherers. The modifications we may need to make in order to interact successfully with horses could be very different from that which would be acceptable to dogs.

In the equine world, there is much debate around style of horsemanship and the wellbeing of the horses in such interventions. What is your take on this?

Whenever we undertake research involving equines we use the latest research on how equines communicate and learn and what may cause them distress. The Parelli program is the only equine training program to have been assessed against The International Society for Equitation Science (ISES) evidence on how horses learn showing congruence between the program and this evidence base. ISES is an independent not-for-profit organisation that chiefly aims to facilitate research into the training of horses to enhance horse welfare and improve the horse–human relationship.

Hemingway A, Carter S, Callaway A, Kavanagh E, Ellis S. (2019) An exploration of the mechanism of action of an equine-assisted intervention. Animals, 9 (6), 303. 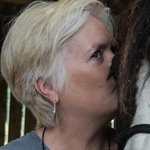 Professor Hemingway’s research focuses on whether interventions involving horses can aid in positive behaviour change for individuals with mental health and behavioural issues.

One thought on “Understanding equine assisted interventions: The role of emotional learning”