Biology
Professor Hiroshi Iwasaki, Tokyo Institute of Technology, aims to learn more about a biological process called homologous recombination, which is crucial to maintaining the integrity of DNA. His laboratory-based research means that we can learn more about this process and a key protein called Rad51. An increased understanding of this complex mechanism could be translated to the DNA repair processes in the human body.

Every day, DNA, proteins and other molecules engage in a concert of complex dances and rituals in our bodies. They change and share partners, routines and stages, all to keep the cell and the organism functioning, and to maintain genome integrity. One of these dances is called homologous recombination. In meiosis (cell division of reproductive egg or sperm cells), it sees one donor’s chromosome link arms with another and swap material to create genetic diversity; in mitosis (cell division of every other cell type), it helps preserve the integrity of genetic information.

However, this recombination and repair mechanism, if not danced properly, can also behave in a more sinister manner, generating cancerous mutations and genomic rearrangements. Learning the steps and actors in this convoluted dance could help researchers understand where and how things can go wrong while highlighting potential drug targets. Now, Tokyo Institute of Technology Professor Hiroshi Iwasaki and his team are working to put the pieces together.

Repairing DNA
DNA naturally exists as two strands that are intertwined. DNA stores the genetic instructions required for the functioning, growth and reproduction of all known organisms. Each strand of DNA is composed of building blocks that come in four varieties represented by the letters A, C, G, and T. The two strands of DNA are complementary, meaning that when A is present on one strand, the other strand has a T; and when C is present on one strand, the other strand has a G. The underlying chemistry responsible for the pairing of A with T and C with G is what holds the two strands of DNA together. The order of these building blocks along the strands is known as the sequence of DNA. DNA molecules such as chromosomes usually contain millions of these building blocks, which are grouped into hundreds of genes, each of which is typically comprised of thousands of building blocks. Genes encode proteins, which are the molecules responsible for all cellular activity. The correct sequence of each gene is critically important for the production of a fully functioning protein. When the sequence is changed, such as through the substitution of one building block for another (i.e., a mutation) – for example, an A becoming a G – the resultant protein is dysfunctional.

Each time a cell divides, it must first make a copy of all of its DNA (i.e., its genome) so that the new cell also carries the genetic instructions necessary for it to function. This process, known as DNA replication, is a major source of mutations since it involves copying each building block one-by-one. In addition to these mutations, a more severe form of DNA damage is breaks in either one (single-strand break) or both (double-strand break) strands. When both strands are broken, the DNA molecule is effectively separated into two, meaning that a single chromosome becomes two abnormal chromosomes. Such breaks arise frequently during DNA replication, but a process known as homologous recombination is able to repair them.

But even efforts to repair such breaks can go wrong. Erroneous or unchecked homologous recombination can lead to harmful changes such as chromosomal translocations, deletions and inversions that have similar or worse consequences than the damage it was trying to fix. When mutations accumulate, and the repair of breaks becomes inefficient, the genome is said to be unstable. These damaging events occur even more frequently in cells with unstable genomes, leading to further deterioration of the genetic instructions necessary for life. Such cells often become cancerous, and the ever-increasing genetic changes spur on the disease.

Why are some people more susceptible to the devastating effects of genome instability? In many cases, there are mutations in the genes involved in productive homologous recombination, causing diseases such as Bloom syndrome which carry a higher risk of cancer. Additionally, familial mutations in the BRCA1 and BRCA2 genes have been shown to decrease the efficiency of homologous recombination, and people who inherit such mutated genes are at a high risk of breast and ovarian cancer.

Homologous recombination 101
Each individual person contains trillions of cells. In one day, a single human cell’s DNA can suffer tens of thousands of damage events. Unrepaired, these lesions can result in gene dysfunction or inaccurate gene replication, leading to cell death or – through several cell generations – gene deterioration and eventually, cancer. Fortunately, cells have an arsenal of reparative tools and processes at their disposal – including homologous recombination.

Homologous recombination facilitates the shuffling of genetic information between two different DNA molecules with very similar (or homologous) sequences. It can be used to facilitate error-free repair of DNA double-strand breaks, alongside its role in the type of cell division known as meiosis. It is a universal mechanism, used across viruses, bacteria, yeasts and multicellular organisms (such as animal and plant cells).

During homologous recombination, a protein known as ‘Rad51’ in humans and other eukaryotes binds single-stranded DNA (ssDNA) – generated either by a troupe of helicases and nucleases unwinding DNA at a double-strand break or a replication fork’s passage over a damaged site – and searches intact double-stranded DNA (dsDNA) for sequence similarity. Once it has found a section of DNA whose sequence is highly similar to the sequence of the damaged site, the ssDNA invades the dsDNA and displaces its non-complementary strand to create a new “heteroduplex”. The invading strand is then elongated based on its complementary template, allowing the cell to recover ‘lost’ genetic information. The invading strand can then be released and reunited with its original strand or permanently swap partners with the displaced strand. This dance similarly occurs during meiosis, where the cell’s DNA entwines with a donor’s to create a unique, yet safe and functional set of genes.

Homologous recombination choreography: a deep dive
With so much riding on homologous recombination, understanding its choreography and key performers is critical. Mapping them out could help researchers understand where and how the dance can go wrong and potentially reveal new biomarkers and anti-cancer drug targets. Knowing this, Professor Iwasaki and his team set out to study Rad51’s relationship with single and double-stranded DNA and trace their steps.

Homologous recombination is a double-edged sword: it is essential for preventing genome instability but, if dysregulated, also has the potential to drastically destabilise the genome.

Learning from FRET
Previous attempts to decipher the molecular function of Rad51 have focused on biochemical assays, where the Rad51 protein is purified and mixed with purified single- and double-stranded DNA in a test tube. Then, by monitoring how Rad51 binds each type of DNA, it has been possible to evaluate the activity of Rad51. These approaches have provided many fundamental insights into Rad51 activity. Prof Iwasaki’s team exploited a process called fluorescence resonance energy transfer, or FRET, which allowed them to visualise the steps of homologous recombination directly in a solution. Importantly, this allowed them to detect the unstable and transient intermediates that occur during the recombination process, something that had not been possible with previous approaches. FRET works by transferring energy from a donor molecule to an acceptor molecule. The donor molecule emits fluorescence, which can be detected. However, when the acceptor molecule comes into close proximity with the donor molecule, the fluorescence from the donor molecule is greatly diminished as it is quenched by the acceptor. This transfer of energy can be used to calculate changes in the distance between two DNA molecules.

Previous biochemical and structural analyses had demonstrated that all Rad51-family proteins are remarkably similar, whether they be from bacteria, yeasts, mice, plants, or humans. Crucially, they all have two DNA binding sites (sites I and II), each responsible for holding single or double-stranded DNA. Site I also harbours two binding loops (L1 and L2). Scientists had suspected that the L1 and L2 loops of site I, along with site II, played distinct roles in the process of homologous recombination, but the differences had evaded understanding for many years. The team employed mutant versions of yeast Rad51 to examine this process using FRET-based approaches.

Their research showed that the dance initiated by DNA breaks opens with two amino acids in site II – Arg-324 and Lys-334 – taking ssDNA by the ‘hand’ and forming a protein-DNA complex. An amino acid in L1 – Arg-257 – then coaxes dsDNA to the floor. Extensive homology will see L1 and L2’s amino acids sequentially insert into the DNA, to create ‘C2’. Meanwhile, site II keeps the displaced ssDNA stable, which further assists the process.

In essence, there is a three-step model; firstly, a three-stranded DNA intermediate is formed, this intermediate then matures, and finally ssDNA is released from the mature intermediate. The ability to understand more about the role of accessory factors and the regulation of Rad51 helps uncover the causes of genomic instability seen during tumour development.

The finale
Professor Iwasaki’s study provides us with a comprehensive laboratory model of a critical DNA repair process and explores the key role of Rad51 in the dance of DNA strand exchange, something that has previously proven technically challenging. Expanding and enhancing the repertoire of techniques that are available to explore homologous recombination means that this research field can advance. In particular, it opens up the possibilities for studies using proteins derived from other species.

Indeed, despite being drawn with yeast proteins, homologous recombination’s high conservation and similarity among organisms mean the researchers’ map can be applied to humans. Further studies will be required to discover whether these findings are indeed evolutionarily conserved across species.

Do you think the Rad51-driven homologous repair process could be harnessed for potential therapeutics, such as gene therapy?

<> Simple answer: yes and no. My full answer is below. 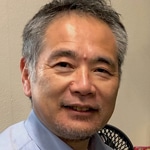 Hiroshi Iwasaki obtained his PhD in Medicine from Osaka University in 1991. He has previously worked at Osaka University and at Yokohama City University and is now a professor at Tokyo Institute of Technology. Prof Iwasaki’s research is focused on molecular mechanisms of homologous recombination and DNA repair

Prof Iwasaki examines the DNA strand exchange reaction, which is a central step of homologous recombination.

JSPS (Japan Society for the Promotion of Science)