Strongyloides stercoralis and HTLV-I are endemic pathogens that impact millions of people worldwide, particularly those in socioeconomically deprived communities. Dr Catherine Gordon and her team, led by NHMRC Leadership Fellow Professor Don McManus at QIMR Berghofer in Brisbane, Australia, summarise the current data on S. stercoralis and HTLV-I infections in Tropical Australia, and advocate for the inclusion of Strongyloides to the Australian National Notifiable Disease Surveillance System.

Neglected Tropical Diseases (NTDs) are a collective group of bacteria, viruses, fungi, and parasites that affect billions worldwide. NTDs are commonly found in countries in Africa, Asia, and Latin America, and are most prevalent in areas with restricted access to clean water and adequate sanitation. This group of diseases includes well-known maladies such as Leprosy, Rabies, and Chagas disease, which kill approximately 500,000 individuals per year. Soil-transmitted helminths (STHs) are a sub-group of NTDs comprised of intestinal roundworms, or nematodes, which are transmitted via contaminated soil, water, or food. They are most prevalent in warm, moist climates, and symptomatic infection can be lifelong and highly debilitating.

Problematic passengers
Strongyloides is a genus of parasitic nematodes that affects 100 million people worldwide. It is considered one of the world’s most neglected STHs, according to the World Health Organization (WHO). Dr Catherine Gordon and the team at the QIMR Berghofer in Brisbane, Australia, investigate molecular diagnostics and disease epidemiology for Australian and South East Asian parasites, and have recently explored the lifecycle, prevalence and management of one species of Strongyloides: S. stercoralis.

The S. stercoralis parasitic lifestyle is highly intricate and switches between a free-living (outside the human body) and a parasitic (inside the human body) cycle. In the free-living lifecycle, parasite larvae are passed from the stool of an infected person into the environment, where they develop into adult males and females that mate and produce eggs. These eggs hatch larvae which develop into infective larvae that penetrate human skin. These ‘second generation’ parasites cannot survive as free-living worms and must find a host in order to live. In the parasitic lifecycle, once the larvae have penetrated the human body, they migrate to the small intestine, via the bloodstream, lymphatic system, or connective tissue. Once inside the small intestine, larvae mature into adult females, which reside deep within the intestinal tissue, and produce eggs through a process called parthenogenesis – without males, or mating. Parasitic eggs hatch into larvae, which either complete the same parasitic life cycle as their mothers, remaining inside the body and reinfecting tissues of the host, or they are passed via the stool into the environment, to complete the free-living lifecycle.

S. stercoralis and HTLV-I are dangerous endemic pathogens that concurrently affect some of Australia’s most isolated and vulnerable citizens.

S. stercoralis infection presents in humans in three potential phases; acute, chronic, or hyperinfection (also termed the ‘disseminated’ phase). Symptoms for the acute and chronic infections are usually mild, and include a rash, fever, cough, and diarrhea. During the chronic phase, these symptoms persist intermittently for decades. In hyperinfection, high levels of autoinfection can lead to dissemination, or dispersal, of larvae throughout the body, and the patient may experience severe gastrointestinal symptoms, mineral deficiencies, malnutrition, and bacterial sepsis. During autoinfection, the migrating larvae carry bacteria with them from the small intestine, dispersing bacteria into the blood along the way. Infection also causes inflammation and increases the ‘porosity’ of blood vessels which can lead to increased bacteria in the blood. These bacteria can proliferate in the bloodstream, resulting in sepsis, multiple organ failure, and, without treatment, death.

Diagnosis of S. stercoralis is performed via laboratory analysis of blood or fecal samples, through serological ELISA tests against Strongyloides IgG antibodies present in the blood, or fecal microscopy detection of parasite larvae. Both testing methods exhibit low sensitivity and a high false-negative rate. Ivermectin is the current WHO-recommended treatment for strongyloidiasis, and treatment programmes for those infected should be managed extremely carefully, due to the septic nature of the disseminated infection phase. All drug classes used against human helminth infections have reported instances of parasitic resistance in veterinary practice, and resistance patterns in human infection will need to be monitored carefully over the coming years.

The ongoing coronavirus pandemic adds further complications: corticosteroids, a class of inflammatory drug used to treat COVID-19, can cause immunosuppression, which, in those with strongyliodiasis, can lead to hyperinfection, sepsis, and death. In countries with endemic strongyliodiasis, a high level of awareness of the risks associated with COVID-19 therapy, alongside presumptive treatment with ivermectin, may be essential to prevent additional fatalities associated with COVID-19 complications.

Helminth horror
S. stercoralis is endemic in the Aboriginal communities of Australia. Due to the primary distribution of STHs in warm, moist climes, the majority of Australia’s S. stercoralis infections are primarily concentrated in Tropical and Subtropical Australia – an area spanning the Northern Territories, North Queensland, and the northernmost provinces of Western Australia; however, cases have also been identified in more temperate regions. The problems associated with assessing the prevalence of strongyloidiasis in Australia are manifold: over the last 50 years, only 83 articles concerning S. stercoralis infection in Australia have been published, and only 52 of these were conducted on Australian residents, Indigenous or otherwise. While studies on S. stercoralis are lacking in general, those that have been carried out are primarily retrospective investigations of hospital cohorts and other groups already suspected of being infected – almost no community-wide prevalence studies exist. In Australia, strongyloidiasis is not recognised widely as a serious condition, so few people are routinely tested, and knowledge of the disorder is rudimentary among medical staff. Combined with the low accuracy of testing methods, these problems compound to blur the true impact of S. stercoralis on Australia’s Aboriginal communities.

To further complicate issues surrounding Strongyloides infection in Aboriginal communities, the immunosuppressive retrovirus HTLV-I is also endemic among Indigenous Australians. HTLV-I is passed through breast milk, the transfusion of blood products, and via sexual contact. HTLV-I itself causes increased inflammation, but as it infects T-cells, one of the major cells of the immune system, it can lead to decreased efficacy of the immune system and therefore perturb the immune system’s natural responses to invading pathogens. The immunosuppressive activities of HTLV-I can therefore make it easy for endemic parasites such as S. stercoralis to proliferate unchecked, and cause a widespread, fatal hyperinfection. Viral status is diagnosed through antibody testing of blood or cerebrospinal fluid samples. Currently no retroviral treatment against the virus exists, although corticosteroids can be used to manage disease progression in positive individuals, which, as mentioned earlier, are a risk factor for developing disseminated hyperinfection of strongyloidiasis. The majority of HTLV-I infections in Australia have been reported in remote Aboriginal groups in Tropical Australia, but, as with strongyloidiasis, assessing the ubiquity of the virus is near impossible due to the dearth of community-wide prevalence studies. In 2018, the Australian government pledged to change this through an eight-million-dollar research programme on communicable diseases, with a focus on HTLV-I. The results will hopefully shed light on the true pervasiveness of HTLV-I among Indigenous peoples.

Two’s company: HTLV-I & Strongyloides
Concurrent infection of HTLV-I and S. stercoralis is associated with a high death rate, even in medically advanced countries such as Australia. Due to the immunosuppressive nature of HTLV-I, diagnosis of both pathogens simultaneously is essential to ensure correct disease management. However, there is a general dearth of data on coinfection that perpetuates medical ignorance about signs and symptoms of HTLV-Strongyloides, resulting in many deaths from mismanagement of a highly treatable parasite.

Only one community-wide survey on concurrent HTLV-I-Strongyloides infection in Australia has been conducted, which showed that 40% of individuals tested (n=74) were positive for HTLV-I, and, of those, 14% were also positive for S. stercoralis. All other studies investigating HTLV-I-Strongyloides coinfection are retrospective examinations of data obtained from hospital cohorts. One such study from Alice Springs hospital identified 18 cases of strongyloidiasis, 7 of which also tested positive for HTLV-I. Of this cohort, 15 died from potential strongyloidiasis complications. Another Central Australian study identified 39 HTLV-I positive subjects (n=97), but only 6 of these virus-positive individuals also had strongyloidiasis. Clearly, a lack of data prevents drawing any firm conclusions about the true prevalence of coinfection in Australia, and further community-wide investigations, particularly in remote Aboriginal communities, are essential to developing a true understanding of the burden posed by both pathogens.

The immunosuppressive activities of HTLV-I make it easy for endemic parasites such as S. stercoralis to proliferate unchecked.

Hope for the future: pathogen surveillance
Diagnosis and treatment of the concurrent virus-parasite infection presents further problems. As previously mentioned, Strongyloides diagnosis tests are inaccurate, and even in cases where infection is correctly detected, treatment can be insufficient. One six-year study determined that there was an overall lack of effective treatment for S. stercoralis after positive diagnosis. This has been attributed to the rapid turnover of staff at remote locations and the subsequent paucity of local infection knowledge, as well as the nationwide lack of recognition of strongyloidiasis as a serious, life-threatening disorder.

Combined, these factors have led Dr Catherine Gordon and the team at QIMR Berghofer along with Strongyloides Australia Inc to advocate for S. stercoralis to be added to the Australian National Notifiable Disease Surveillance System (NNDSS). The NNDSS is a list of communicable diseases that serves to protect the public through the surveillance and monitoring of the registered pathogens. Established in 1990, the NNDSS is a tool aimed at educating and informing public health departments about communicable infections, to enable them to protect their local communities through implementing control and management strategies. Addition of S. stercoralis to this list would highlight the importance of strongyloidiasis within Aboriginal communities, and would prompt adequate monitoring of the parasite’s prevalence. Further to this, registration of Strongyloides as an NNDSS pathogen could help educate health care workers on disease signs and symptoms, ensuring that infected individuals receive the correct treatment, and generally improving patient outcomes.

Conclusion
Both S. stercoralis and HTLV-I are dangerous endemic pathogens that concurrently affect some of Australia’s most isolated and vulnerable citizens. Current data paucity, diagnosis methods and treatment options are both insufficient and dangerous. To alleviate this trifecta of inadequacy and provide help to some of Australia’s most disadvantaged and discriminated against peoples, S. stercoralis should be added to the NNDSS. Addition of the pathogen to this government-recognised list will draw attention to the medical needs of Indigenous Australians, providing them with a support system to help manage, control and eventually eradicate these devastating diseases.

We are currently focusing on developing rapid point-of-care DNA-based diagnostics for a range of parasitic diseases including strongyloidiasis, but also other soil-transmitted helminths, and schistosomiasis.

Are the same patterns and interactions with S. stercoralis seen with other immunosuppressive viruses, such as HIV, as with HTLV-I?

Concurrent infections of strongyloidiasis and these immunosuppressive viruses and resulting interactions and effect on the immune system are complex. While it is presumed that infection with immunosuppressive viruses leads to increased likelihood of disseminated strongyloidiasis, the data doesn’t quite back this idea up. Both HIV and HTLV-I are risk factors for increased dissemination, but they are not the whole story. 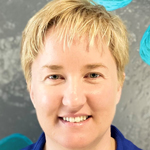 Dr Catherine Gordon is a post-doctoral researcher at the QIMR Berghofer in Brisbane, Australia. She holds a Bachelor of Science majoring in Biomedicine and Microbiology with first class honours in Marine Parasitology, and a PhD in Molecular Parasitology. Dr Gordon’s research focuses on molecular diagnostics and epidemiology for parasites in Australia and South East Asia.

Dr Gordon examines Strongyloides stercoralis, considered one of the most neglected tropical diseases.