Earth & Environment
Water is the lifeblood of planetary health and human civilisation. As a critical source of fresh water, rivers underpin civilisations, past and present. However, rivers constantly change in response to environmental and human pressures. Protecting global river systems from climate change and other anthropogenic activities (e.g., mining, pollution, dam construction), and understanding the interactions with human health (e.g., through the spread of water-borne and infectious diseases) has become a critical concern. This is the focus of the newly established Lincoln Centre for Water and Planetary Health, University of Lincoln (UK), under the foundational directorship of Professor Mark Macklin and Professor Chris Thomas.

Water is the lifeblood of human civilisation. Without water to support vital biological and social functions, civilisations could not flourish. As a critical source of fresh water, rivers have underpinned many, if not most, historical civilisations. However, rivers are not static; they constantly change in response to environmental (and increasingly human) pressures.

Climate change exerts a particularly strong influence on river systems; for example, prolonged drought can result in channel network contraction through sudden reductions in river flow, while catastrophic floods can result in the destruction of vital urban and rural infrastructure, loss of life and livelihoods. Climate during the Holocene (i.e., the last ~11,700 years of Earth history) has varied widely from region to region, and accordingly river regime dynamics have been equally diverse. In turn, changes in river channels, and their associated floodplains and wetlands, have impacted on human settlements in a myriad of significant ways.

Some river civilisations have faced chronic problems; that is, regular, incremental changes over decades or centuries (e.g., salinization) and which in some instances are manageable from year to year. Others have faced sudden, acute and catastrophic events (e.g., flooding, prolonged drought), occurring during single or successive seasons. Despite the different timescales, both forms of change can lead to irreversible impacts on riverside societies, and in some cases have resulted in total societal collapse.

Along the Nile, the world’s longest river and that with one of the longest histories of continuous, settled human occupation, independently dated archaeological records stretching back seven millennium record in great detail the effects of the changing river regime. Along the lower reaches of the Nile (i.e., Pharaonic Egypt in the Egyptian Nile) civilisation was relatively resilient to change, implementing a comprehensive system of levees and irrigation channels to manage water flow to agricultural areas and help control floodwaters, along with a crop storage system to guard against periods of drought and low river flow. Along the upper reaches of the Nile in present-day Sudan (e.g., the Bronze age Kerma Kingdom of the Nubian Nile) civilisations had only limited windows of opportunity for adaption to abrupt changes in river flow. Owing to both short- and long-term climatic changes that controlled the strength of the monsoon, the region intermittently experienced low flow conditions, when river channels dried up and could no longer support local agriculture, and then high flow conditions, when catastrophic floods inundated settlements and the surrounding land: mass abandonment of settlements was common.

In some cases, with the development of river channel engineering for the purposes of flood protection or irrigation, humans themselves have interfered with river flow conditions, either alone or in conjunction with changing climate. Along the Huang He River (Yellow River, China), large-scale construction of flood embankments, disconnection of the floodplain from the river channel and upstream soil erosion caused by farming and deforestation have altered the natural flow of water and sediment. As a consequence, periodic catastrophic floods breached flood embankments, resulting in millions of deaths and the wholesale relocation of settlements on the North China Plain.

As a critical source of fresh water and nutrient-rich sediment, rivers have underpinned human societies since the adoption of agriculture.

However, it is not just ancient civilisations for whom survival is intricately linked with the health and wellbeing of river systems. Today, both human and planetary health remain dependent on sources of fresh, clean water. This challenge has been taken on by Professor Mark Macklin, foundational head of the School of Geography, University of Lincoln, who has recently been joined by Professor Chris Thomas, by establishing the world’s first centre for water and planetary health.

The Lincoln Centre for Water and Planetary Health
The Lincoln Centre for Water and Planetary Health was established to promote research into the most serious global environmental and social problems related to Earth’s great rivers. These rivers support most of the globe’s population, often cross disputed borders (e.g., the Indus, Nile, Mekong) and provide sites for many of the world’s megacities (e.g., Shanghai and the Yangtze River, Delhi and the Yamuna River, Cairo and the Nile River, and Baghdad and the Tigris River). In the face of rapidly changing climate, these rivers (and by extension the populations living along their banks) are significantly impacted by extreme flooding and droughts, pollution and contamination from human activities (e.g., mining, agriculture, industry, domestic waste), and water-borne diseases.

Despite the University of Lincoln School of Geography only welcoming its first students in September 2017, the School and the Centre are flourishing, with the School already accredited by the Royal Geographical Society (with IBG). The RGS gave specific praise for its “integrated, relevant and contemporary” new courses, which uniquely focus on “the safety and health of the inhabited Earth”. Furthermore, the School is an active member of the RGS-IBG Geography Ambassador scheme, through which undergraduate, postgraduate, and graduate geographers are trained as ambassadors to promote geography in the classroom and beyond. Within the Centre for Water and Planetary Health itself, research is focused on six themes: Climate Change and Extreme Weather Events, Coasts and Catchments, River Science, Ecosystem Dynamics, Environmental Contamination, and Waterborne and Vector-borne Disease. The Centre supports a diverse group of researchers, including funding a PhD programme to train the next generation of scientists. The Centre also works closely with colleagues at other UK-based institutions and those around the world (e.g., Massey University, New Zealand; University of Padova, Italy; La Trobe University, Australia; University of Waterloo, Canada; Maastricht University, Netherlands).

In 2018, Prof Macklin was awarded the prestigious 2018 RGS-IBG Murchison Award for his pioneering research into the form and function of rivers. Now, to its already extensive and impressive list of researchers, the Centre is soon to welcome a new colleague, Prof Chris Thomas. Prof Thomas brings with him a wealth of experience leading interdisciplinary research programs in the interrelated fields of ecology, geographical information, spatial population dynamics, and disease vectors. He has led many field campaigns in remote and challenging environments, and as a past university VP Research he also brings strategic leadership experience to the Centre.

Rivers of humankind
While traditional fields of river research are an integral part of the Centre (e.g., climate change impacts, flood risk assessment, coastal and river dynamics), it is emerging areas of research that have generated much of the excitement. These are areas with a strong focus on ‘impact’, both environmental and social, the outputs from which address some of the most pressing contemporary issues facing humanity specifically and planetary health more generally. In particular, Prof Macklin has been focusing on river contamination from past and present metal mining, including catastrophic mine tailings dam failures, while Prof Thomas is focused on issues around feedbacks between human activity and water, including river contamination, with the epidemiology of infectious diseases in humans, livestock and wildlife.

Prof Macklin’s award-winning work on metal mine-linked contamination of river systems undertaken over the past 35 years, has ranged from geochemical mapping of historical contamination of English and Welsh floodplains to assessing the environmental impact of the 1850s Victorian gold rush on Australian rivers. In one study of note, he considered the long-term fate and impacts of two tailing dam failures that struck north-western Romania in 2000. These failures released some 200,000 m3 of contaminated water, along with 40,000 tonnes of tailings into major tributaries of the Danube. The resulting pollution had a significant impact on aquatic health downstream of the disasters, impacting not only on Romania, but also communities in Hungary, Serbia, and Bulgaria. For his part, Prof Thomas has been involved in numerous studies looking at population dynamics of wildlife and disease vectors in relation to climate, habitat and landscape structure, including large-scale studies of the spatial dynamics of malaria transmitting mosquitoes in rural Gambia and Tanzania, with current research projects on the vast floodplain of Upper-Zambezi in Zambia and, at a more local scale, residual hotspots of transition in Zanzibar.

Building on the combined experience and expertise of the group of researchers brought together in the University of Lincoln’s new School of Geography, the Centre will focus on the links between river systems and human health and, more broadly, the prospects for a flourishing human civilisation: a planetary health perspective. For example, a major new interdisciplinary theme is on emerging contaminants such as pesticides, pharmaceuticals, and natural and synthetic hormones introduced into water sources by way of agricultural runoff, urban and industrial waste. These can damage ecosystems and human health directly of course, but also may play a key role in developing anti-microbial resistance, with implications for both medicine and food-production. Certainly, process-based, cross-sector understanding of the system dynamics are urgently required to design possible interventions. This issue is the current focus of a major new study at the Centre of the Ganga River and its tributaries, funded through the UK’s Global Challenges Research Fund (GCRF).

We have entered an age where, annually, the production of solid mine wastes now matches the amount of Earth materials moved by global geological processes and where an estimated 50% of the Earth’s surface is anthropogenically modified. Major rivers, upon which our civilisations were founded and on which we still depend, are profoundly affected by the scale and rapidity of major shifts in Earth-system processes of this kind. This poses a significant threat to us all – on individual, settlement, and ultimately civilisation scales. As such, there has never been a more important time to invest in a better understanding of the processes and feedbacks between river, human and planetary health. 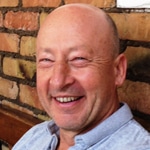 Prof Macklin is a multi-award-winning physical geographer and a world authority on river systems and global environmental change. He was awarded the 2018 Royal Geographical Society (with IBG) Murchison Award for his pioneering research into the study of the form and function of rivers.

Professor Chris Thomas focuses on water and the landscape ecology of vector-borne diseases, particularly malaria transmission in sub-Saharan Africa, and the effect that climate change has on these systems.