Arts & Humanities
Dr Helen K. Liu from the National Taiwan University provides a typology for crowdsourcing public services based on theories of coproduction, public sector volunteerism, and government–citizen relations. Having carried out an extensive review of existing literature on crowdsourcing, she systematically examined the fundamental concepts applied to defining the role of citizens engaged in crowdsourcing practices in the public sector. The resulting typology can help policymakers and designers clarify the functions of crowdsourcing adoption, reducing misunderstanding between governments and citizens. Furthermore, this typology will allow the field to build knowledge systematically and collectively.

The practice of obtaining services, information, or opinions from a large group of people is known as crowdsourcing. It usually involves online communities submitting their data via the internet, social media, and smartphone apps. Some people involved in crowdsourcing work as paid freelancers; others are unpaid volunteers. Crowdsourcing takes advantage of global interconnectedness via the internet as it strives to harness collaboration for problem solving, innovation, and efficiency. This collective intelligence enables a large group of individuals to share their knowledge, data, and skills in order to solve societal issues.

Studies have revealed that collaborative governance with effective crowdsourcing initiatives can reduce administrative costs, improve service efficiency, and enhance the government–citizen relationship. While crowdsourcing has the potential to improve the quality and efficiency of public services, potential risks include compensation, payment, rights of crowdsourcing outcomes, and crowdsourcing influences. A re-examination of the relationships and dynamics between governments and citizens who are engaged in crowdsourcing is therefore required to develop a framework, or typology, for practitioners adopting and implementing crowdsourcing within their organisations.

Dr Helen K. Liu, Associate Professor in the Department of Political Science at the National Taiwan University, is fulfilling this need. Her research provides a typology for crowdsourcing public services based on theories of coproduction, public sector volunteerism, and government–citizen relations.

Dr Liu’s work is the first stream of research that considers the design principles of adopting crowdsourcing in the public sector.

Consolidating the theoretical basis
In the course of this research, Dr Liu carried out an extensive review of existing literature on crowdsourcing. She systematically examined the fundamental concepts applied to defining the role of citizens engaged in crowdsourcing practices in the public sector. From this, she was able to identify the essential theories required to consolidate the theoretical ground underpinning crowdsourcing – such as coproduction, public sector volunteerism, and direct public engagement via new forms of technologies and social media.

Coproduction involves citizens working in partnership with government to improve both the quality and effectiveness of policies. It involves public participation in the delivery of government services. Coproduction has been observed to enhance relationships between citizens and government. It creates synergy between the policy work being carried out by citizens and government, as both parties share power, and can enhance service efficiency and effectiveness. In contrast, crowdsourcing involves only its service users and incorporates a broader scope of participants.

In the public sector, crowdsourcing requires government agencies making an open call for participants to contribute online. It can be viewed as a type of volunteering action. Volunteers are already involved in health, welfare, environmental protection, natural resources, parks and recreation within the government sector. Crowdsourcing, however, provides a new way for governments to collect intelligence and information. It provides governments with user-generated geographical data and enables translation jobs to be performed during crises.

Crowdsourcing is also recognised as a form of public engagement. Technology, such as in wiki planning, SeeClickFix and participatory budgeting, has the potential to enhance the design of effective direct citizen engagement. A recent study revealed that information communication technology (ICT) can enable a higher participation rate as it allows participants to access more information about their concerns.

Designing crowdsourcing based on citizen and government relationships helps designers align goals and tasks to the right coproducers.

Case studies
Dr Liu presents four case studies based on the process of producing public policy and services and the function of citizens’ inputs. For each case, evidence and information were collected through documents, interviews, and web content analysis. The cases were selected using theoretical sampling.

First, in complementary crowdsourcing in service implementation, citizens are involved in implementing services through a complementary task, but not in designing policy. Here, governments also seek citizens’ efforts and incorporate their inputs into service provisions.

In the Peer to Patent case, citizens were involved in patent review. Dr Liu studied a joint project by New York University and the United States Patent and Trademark Office. It ran from 2007 to 2009 with the aim of coproducing patent review services. Previously, reviewers lacked knowledge and timely access to sufficient information resulting in a huge backlog. This pilot involved many volunteer reviewers who conducted research and reviews through the online PTP platform. The citizens’ diverse knowledge of the latest inventions together with their access to a wider range of databases complemented the limitations of the patent office’s own review process. This coproduced patent review system was observed to improve both the efficiency and effectiveness of the patent review.

Second, in supplementary crowdsourcing in service implementation, citizens can provide information or effort that can be used to improve public services without providing essential services. Dr Liu examined the US National Archives Records Administration Citizen Archivist initiative. Citizens receive training so that they could transcribe and classify documents and records that are maintained and preserved by the government. This involvement of citizens’ efforts has improved the quality of digitalisation, even though the citizens do not directly provide digitalising services.

In complementary crowdsourcing in policy design, citizens are involved in the policy design of a complementary task. The citizens’ innovative ideas contribute directly to policymaking or public service design. These involve challenges or idea competitions where citizens are invited to contribute innovative solutions to a specific issue or problem. Dr Liu investigated the National Aeronautics and Space Administration’s (NASA) Centennial Challenges which invite citizens, universities, research institutions, and private firms to provide solutions to technical problems. This adoption of complementary crowdsourcing provides access to citizen science and enables NASA to coproduce with the public. It also provides a broader range of solutions than would be achieved by contracting the work to an individual company.

Lastly, supplementary crowdsourcing in policy design involves using citizens’ inputs as a reference in policy design. The citizens’ inputs serve only as references for policymakers and are not part of the policy itself. Dr Liu reviewed the UK Department of Energy and Climate Change (DECC) My2050 project. The My2050 simulation allows the public to express their preferences and actions related to energy policy. It provides reference points and important preferences facilitating the DECC’s understanding of public opinion about various energy options and policies.

Citizens as coproducers
Dr Liu’s typology redefines the roles of and relationships between governments and citizens. It demonstrates that the more a government views citizens as coproducers, the more crowdsourcing activities can become complementary. Moreover, citizens can have a greater impact on policy design and become more involved in the implementation of services. This typology can help policymakers and designers clarify the functions of crowdsourcing adoption, reducing misunderstanding between governments and citizens. Designing crowdsourcing based on citizen and government relationships helps designers align goals and tasks to the right coproducers. It also enhances relationships, promoting democracy building. Furthermore, this typology will allow the field to build knowledge systematically and collectively.

Dr Liu has published a series of manuscripts that help governments to anticipate crowds’ behaviours. She has also been invited to train and provide consultations for civil servants from several countries on the creation of crowdsourcing initiatives.

What has been the most rewarding outcome of your work so far?

The wisdom of the crowd: A new typology for crowdsourcing was last modified: August 16th, 2021 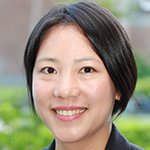 Dr Helen K. Liu is an Associate Professor in the Department of Political Science at the National Taiwan University, with a PhD from Indiana University-Bloomington. Recently, Dr Liu was awarded the 2020 MOST Outstanding Research Award. Her primary research interests are in interorganisational networks, social service provision, collaborative governance, crowdsourcing adaptation, and nonprofit management.

Dr Liu provides a typology for crowdsourcing public services based on theories of coproduction, public sector volunteerism, and government–citizen relations.

Liu, H. K.. (2021). The wisdom of the crowd: A new typology for crowdsourcing. Research Outreach, 124. Available at: https://researchoutreach.org/articles/the-wisdom-of-the-crowd-a-new-typology-for-crowdsourcing/ (Accessed YYYY/MM/DD)