Health & Medicine
Professor Giovanni Brandi and Dr Simona Tavolari, from the University of Bologna, study the association between asbestos exposure and intrahepatic cholangiocarcinoma (ICC). Case-control analyses in Italy and four Nordic countries found strong associations between occupational exposure to asbestos and ICC. Therefore, asbestos is suggested as a risk factor for ICC development. This could be due to asbestos fibres becoming trapped in the small bile ducts, leading to prolonged inflammatory responses and cell malignant transformation. The researchers identified a patient with a novel BAP1 mutation, thereby identifying a novel molecular marker for this disease. Genomic studies on ICC patients exposed to asbestos are ongoing in order to identify a possible asbestos-related genetic signature.

Cholangiocarcinoma (CC), also known as bile duct cancer, is a rare malignancy that affects the cholangiocytes (epithelial cells lining the bile duct). It is the second most common primary liver cancer after hepatocellular carcinoma, accounting for up to 15% of all primary liver tumours, and is characterised by poor prognosis. Based on epidemiological trends, it has been estimated that approximately half of all primary liver cancer deaths will be associated with CC by 2035. There are two forms of the cancer: the intrahepatic (ICC), developing within the liver, and the extrahepatic (ECC), developing outside the liver, characterised by different epidemiological, aetiological (the set of causes) and molecular features.

In the last few decades, there has been a steady increase in global reported cases of CC, particularly ICC, which affects all age groups. Some pathological conditions have been recognised as risk factors for ICC, such as bile duct cysts, cholangitis, hepatolitiasis, liver fluke infections, obesity, and chronic liver disease. Infectious diseases, such as hepatitis B and C, and personal habits, such as heavy alcohol and cigarette consumption, have all been identified as risk factors for ICC. However, these major risk factors cannot readily explain around 50% of ICC cases in developed countries, as there were no associations found. Recent developments have focused on possible occupational and environmental risk factors, such as asbestos exposure.

Asbestos exposure and cholangiocarcinoma
Asbestos is a natural mineral that has been widely used in construction and the manufacturing industry in the past century due to its durability, stability, heat and chemical resistance, and low cost. However, it has been banned in 52 countries in recent years, as environmental exposure to asbestos has been linked to several diseases, including cancers.

Asbestos exposure has been hypothesised to contribute to the increased rate of CC diagnosis. Researchers first found the presence of asbestos fibres in liver tissue more than three decades ago. Asbestos fibres were also found in removed gallbladders of patients with gall stones as well as of in the liver of patients with ICC living in Casale Monferrato, an Italian region with high incidence of asbestos-related cancers. Epidemiological and molecular studies suggested that asbestos-induced carcinogenesis is complex and occurs from different causative factors, such as patient genetic determinants and the time and dose of exposure. The biological mechanisms by which asbestos reaches the biliary duct still remains elusive.

In the last few decades, there has been a steady increase in the global reported cases of bile duct cancer (ICC).

Researchers suggested that after inhalation or ingestion, asbestos fibres may reach the circulatory system, and are then delivered to all organs, including the liver (Figure 1). Due to the high microvascular permeability of the liver sinusoids (small blood vessels), asbestos fibres can easily be deposited into the liver. Once in the liver, they can give rise to prolonged inflammation, which produces free oxygen radicals, cytokines, and growth factors. These are implicated in tumourigenesis, as the balance between cell proliferation and cell death becomes abnormal. Sustained proinflammatory signals may also alter cellular epigenetic programmes and induce gene hypermethylation, by silencing genes that are responsible
for suppressing tumours.

Case-control analyses
A 2013 case-control analysis to identify the association between occupational exposure to asbestos and CC was conducted by Prof Giovanni Brandi and his colleagues at the University of Bologna. They used historical data from 155 CC patients matched with different controls – such as birth date, sex, region in Italy, and occupational exposure to asbestos. It was found that there was an increased risk of ICC in workers exposed to asbestos, regardless of socioeconomic status and smoking history. 54 participants were classified as previously exposed to asbestos and in 52 of the subjects, the potential exposure occurred during the 1960s to 1980s, which are periods of high asbestos consumption in Italy prior to its ban in 1992. Therefore, this study suggested to Prof Brandi and colleagues a potential link between asbestos and the increased incidence of ICC pathogenesis over the past few decades.

The same experimental set up was repeated in a 2018 case-control analysis of CC patients in four Nordic countries: Finland, Iceland, Norway, and Sweden. The larger cohort of participants included 15 million people from the four countries, with the aim of identifying occupational risk factors of cancer. Using national population census data on occupations from 1960 to 1990, the estimated cumulative exposure to asbestos was obtained. It was found that cumulative exposure to asbestos led to an increased risk of ICC pathogenesis. Interestingly, the incidence of CC was higher in males and those aged 60 and above, owing to the lag time between exposure and disease development (around 30 – 40 years). This strengthens the hypothesis that asbestos may represent a risk factor for the development of ICC.

Prof Brandi and colleagues did not find an association between occupational exposure to asbestos and extrahepatic CC (ECC). ICC is derived from smaller bile ducts located proximally to the right and left hepatic ducts, whereas ECC is derived from the right or left hepatic duct, cystic duct, or the choledochal duct. It has been hypothesised that asbestos fibres are more likely to be trapped in smaller bile ducts, causing the higher association between asbestos exposure and ICC incidence.

The asbestos fibres trapped in the smaller bile ducts, particularly at the level of the canals of Hering – which is the site of stem cell niches – could also induce malignant hepatic stem cell transformation. Prof Brandi hypothesised that, given hepatic stem/progenitor cells can divide into cells of both hepatocyte (liver cells) and cholangiocyte (bile duct epithelial cell) lineages, other liver tumour development (such as hepatocellular carcinoma and mixed hepatocellular-cholangiocellular carcinoma) may also be due to long-term exposure to asbestos.

The molecular mechanisms of ICC development are rapidly evolving. A gene that is found to influence environmental carcinogenesis – BRCA1 Associated Protein 1 (BAP1) – has been linked to ICC susceptibility. BAP1 mutations have also been reported to occur with high frequency in sporadic malignant pleural mesothelioma, a classic model of asbestos-related cancer. Heterozygous (+/-) BAP1 mice models (with one deleted gene copy of BAP1) were found to develop malignant pleural mesothelioma at doses of asbestos 10 times lower than wild-type (+/+) BAP1 mice (with both normal alleles of the gene). Heterozygous BAP1 mice were also found to develop the cancer faster than wild-type (used as the control group), suggesting an increased invasiveness and proliferation rate of tumour cells.
Findings

Asbestos exposure is thought to contribute to the increased rate of bile duct cancer diagnosis.

Prof Giovanni Brandi and Dr Simona Tavolari reported the first clinical case of a patient developing an ICC at the young age of 47 years who carried both a germline and a somatic BAP1 mutation. Indeed, while BAP1 somatic mutations are a common genetic alteration in ICC tumour tissue, the presence of a concomitant germline mutation is a novel finding in this disease. Notably, the patient had no risk factors linked to ICC development, except for a low occupational exposure to asbestos.

BAP1 germline mutations are inherited in an autosomal-dominant manner, meaning only a single copy of the mutation is sufficient to cause the disease. Carriers of BAP1 germline mutations often develop at least one of the cancer types associated with BAP1-tumour predisposition syndrome (BAP1-TPDS), including mesothelioma, uveal and cutaneous melanoma, renal cell carcinoma, and basal cell and squamous cell carcinoma.

BAP1 functions as a tumour suppressor gene by maintaining genome integrity and regulating mitochondrial apoptosis after exposure to cellular stress. BAP1 mutant cells are more prone to accumulating DNA damage and mutations, therefore making cells more likely to become cancerous. The researchers also observed a higher recurrent rate of BAP1 mutations in other asbestos-exposed ICC patients compared to those who were not exposed to asbestos. This suggests that asbestos fibres may induce a typical molecular signature in target cells.

Currently, 125 million people globally are still exposed to asbestos. Even countries that have banned its use since the early 1990s are seeing the rise of asbestos-related diseases due to long latency periods. It is thus expected that the number of asbestos-related cancer cases will only increase in the future. Identification of other molecular markers of asbestos exposure would not only improve the monitoring of subjects exposed to this carcinogen and at high-risk of disease, but also allow the development of more tailored strategies for the treatment of this dismal disease.

What are the next steps in identifying further molecular markers of asbestos exposure and ICC? 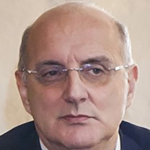 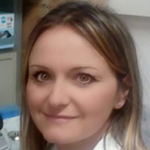 Simona Tavolari is Adjunct Professor for the School of Specialization in Medical Oncology at UNIBO (Italy), achieving a degree in Biological Sciences and a Ph.D in Molecular Physiology.