Health & Medicine
Exceptional mechanisms have evolved over millions of years to allow the foetus to grow directly inside the mother’s womb. These mechanisms, named placental immune editing switches, are orchestrated by the placenta and are responsible for locally switching off the mother’s immune system to protect the foetus. However, Dr Miguel Hernández-Bronchud from Clínica Corachan in Barcelona, suggests that the existence of such mechanisms has a potential side effect: there is growing evidence that cancer cells hijack these placental mechanisms to hide from the immune system.

About 150 million years ago, while most animals laid eggs containing all the food needed for the young to develop, evolution came up with a new system. Mammals were emerging and, as they were bigger and more complex animals, they needed more time to develop. It became impossible for eggs to be large enough to contain all the food required for such long gestation periods, so evolution found a new way: the young would develop directly in the maternal uterus instead. This was the dawn of placental mammals and the emergence of the placenta, an organ connecting the developing foetus to the mother’s blood supply.

Because the foetus is partly formed from the genetic material from the father, the foetus is a foreign body. However, the maternal immune system does not reject the foetus like it would reject any other foreign body; placental evolution was associated with the development of mechanisms, called placental immune editing switches (PIES), that locally switch off the maternal immune system so that the mother’s body accepts and even protects the foetus. But the existence of PIES may have, as Dr Hernández-Bronchud calls it, a side effect: cancer cells are suspected to hijack these regulatory mechanisms to escape immunosurveillance.

Placenta and foeto-maternal tolerance
About a week after conception, the embryo implants into the uterine wall as a blastocyst, an embryonic stage during which an outer layer of cells called the trophectoderm surrounds the inner mass cell. While the embryo itself originates from the inner mass cell, the trophectoderm gives trophoblasts, which attach the embryo to the uterine wall and form the placenta.

The roles of transposable elements
Transposable elements (TEs) are DNA sequences that play a major part in evolution: due to their ability to change their location within the genome, they can create or reverse mutations, and enable the establishment of new mechanisms. Some TEs, called human endogenous retroviruses, may even originate from ancient retroviral infections during which viruses inserted their genome into host cells and viral genes became integrant part of the human genome.

TE expression is tightly regulated. DNA methylation, involving addition of methyl groups (carbon atoms each bonded to three hydrogen atoms) onto DNA, prevents the gene from interacting with proteins, therefore silenceing it. In healthy cells, TEs are usually methylated, thus almost completely silenced. Embryonic and placental cells are an exception: some TEs are demethylated and active. Transcription factors (e.g. in genomics and epigenetic analysis of a single pregnant breast cancer patient several interesting changes in Nuclear Factor of Activated T-cells or NFAT family) can then bind to them and promote the expression of nearby genes. Amongst other things, this leads placental cells to wear on their surface proteins named immune checkpoints. Immune checkpoints physiologically protect healthy cells from a strong immune response by sending an “off” signal to immune cells. This at least partly explains how placental cells locally switch off the maternal immune system and allow foeto-maternal tolerance.

Because regulatory mechanisms to switch off the immune system already exist, cancerous cells do not need to invent new ones.

Why cancer needs immunotolerance
Carcinogenesis happens when normal cells are altered by mutations and become cancerous. Cancerous cells divide uncontrollably and may acquire the ability to infiltrate and destroy healthy body tissues.

Everyone during their life accumulates potentially carcinogenic mutations, but not everyone develops a cancer because the immune system is usually able to detect and eliminate modified cells. This detection is possible because, due to the mutations, proteins expressed on the cell surface are modified and therefore recognised as foreign by the immune system. The more mutations a cell accumulates, the more likely it is to become cancerous, but a higher number of mutations also increases its chances to be detected by the immune system because of the higher number of modified proteins on its surface. Most cancers are therefore destroyed before they can become a threat.

However, cancer immune escape sometimes happens. Aggressive cancers continue to display modified proteins on their surface, yet this does not appear to compromise cancer progression: the cancer keeps growing and spreading, out of control from the immune system. Immunotolerance facilitates and may even be required for a cancer to progress and for its metastases to develop.

Mimicking placental cells
Cancer shares a number of features with the placenta. Both are highly proliferative and, just like the placenta invades the uterine wall, cancer invades healthy tissues. While the placenta orchestrates foeto-maternal tolerance, creating an immunosuppressive microenvironment to protect the foetus, cancer also benefits from immunotolerance: in an immunosuppressive microenvironment like the one created by placental cells, cancer can develop and express new modified proteins without being targeted by the immune system. Because regulatory mechanisms to switch off the immune system already exist, cancerous cells do not need to invent new ones: they can just copy the genetic programmes carefully developed and refined over millions of years.

This theory was further confirmed during a case study conducted by Dr Hernández-Bronchud. The patient was a pregnant woman who also had a breast cancer. The team observed that several dozen immune regulatory genes which were physiologically overexpressed in placental cells were also pathologically overexpressed in cancer cells. The team also identified genes that were silenced in both placental and cancer cells.

Some changes in gene expression observed in both placental and cancer cells are related to the demethylation of TEs. Indeed, Dr Hernández-Bronchud and his team noticed that methylation patterns in cancer cells were similar to those in placental cells: TEs were demethylated and therefore active, able to overexpress or silence genes, while they are normally silenced. Preliminary evidence suggests that cancer redeploys the regulatory mechanisms known as PIES to mimic placental cells: through DNA demethylation, some key TEs, which are physiologically active in the placenta but otherwise mostly silenced in healthy cells, are pathologically activated in cancer. During early development, TEs contribute to the expression of genes involved in growth, proliferation and invasion of placental cells, and in immune regulation. These functions, though not essential in healthy cells, are hallmarks of cancer. In cancer cells, demethylated TEs would therefore promote the expression of genes contributing to cancer proliferation and invasion, and switch off the immune system.

Several research groups have reported that deletion or under expression of tumor suppressor genes may lead up to immunosuppressive landscapes in the tumour microenvironment (TME). Several of these tumour suppressor genes, including p53, PTEN, RB1 and ARF, have been implicated in immune responses and inflammatory diseases. In particular, the p53 tumour-suppressor pathway is involved in crucial aspects of homeostatic regulation of immune responses. Muñoz-Fontela et al. (2016) have also shown that oncoimmunology related molecules may play key tumour suppressor roles in certain cancers.

Response to treatment in patients treated with immune checkpoint inhibitors is promising. However, the development of resistance mechanisms is still possible. New knowledge on PIES and on how cancer mimics the placenta could help the advancement of cancer research because, as Dr Hernández-Bronchud says, “we are so far only seeing the visible part of the iceberg. Research therefore goes on as there is still much to uncover about how cancer hijacks the placental mechanisms involved in foeto-maternal tolerance to escape immunosurveillance”.

Do you think pregnancy (and the fact that the mechanisms involved in foeto-maternal tolerance are already physiologically activated) can make cancer cells more likely to hijack these placental mechanisms?

<> No. In general, cancer during pregnancy is an uncommon occurrence. Only 1 in every 1,000 pregnant women are diagnosed with cancer, even if the number of pregnant women with cancer is likely to increase because more women are waiting until they are older to have children.

Cumulative carcinogenic mutations (the hallmark of cancer but extremely unusual in placental tissues, except in rare choriocarcinomas) are related to ageing (and to some hereditary forms of DNA repair deficiencies).

It is probably mutations in regulatory genes (oncogenes, TEs and transcription factor genes) that are likely to “hijack these placental mechanisms.” https://www.healthline.com/health/cancer-in-pregnancy 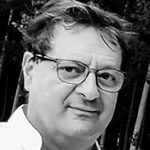 Miguel Hernández-Bronchud graduated from both Cambridge (BA, MA Natural Sciences 1980) and Oxford Medical School (BM BCh 1983, DM 1990), with cancer research and clinical training at the Royal Marsden Hospital (London) and at the Christie (Manchester). He is now a practicing medical oncologist at Genesis Care Oncology Corachán in Barcelona.

Dr Miguel Hernández-Bronchud has 35 years of clinical experience in oncology, with a special interest in breast cancer. He is a pioneer in international oncology research.