The transmission of information between brain cells is regulated by complex loops of biochemical processes. Neurotransmitter molecules are released in the intercellular space by an electrically stimulated neuron and bind to receptors in a different neuron, thus establishing a connection between these cells. By combining cryo-electron microscopy and tomography of vitrified brain samples, Dr Vladan Lučić at Max Planck Institute of Biochemistry is developing a powerful technique that makes it possible to obtain detailed images of the transient macromolecular complexes controlling the release and uptake of neurotransmitters in the brain.

The brain is by far the most complex and one of the most efficient biological structures known to man. A human brain consists of approximately 86 billion highly interconnected nerve cells, or neurons. The ability of higher organisms to respond quickly to external stimuli, to create tools and organised behaviour for survival, as well as, in humans, to support abstract thought and consciousness is crucially linked to the capacity of neurons to exchange information and create short or long-term paths for its transfer among different areas of the brain. Unlike artificial devices, like computers, in which information is created and manipulated in the form of electric currents flowing within tightly connected electronic circuits, the neurons in the brain maintain their individuality as cells, and mostly communicate with each other by exchanging chemical species, known as neurotransmitters. Over hundreds of millions of years of evolution, the process through which neurotransmitters are exchanged between neurons has been optimised to an incredible level of efficiency and reliability. Only recently, however, have we been able to gain some insight into the complex biochemical mechanisms that regulate this process.

How neurons exchange information
Neurons have a very characteristic morphology compared to other cells, and they are characterised by a long and thin structure, called axon, protruding from the cell body and terminating in the form of a ramified group of branches containing presynaptic terminals. Neuronal synapses are contact points between neurons, where information is transferred from a presynaptic to a postsynaptic cell. In an excited neuron, the arrival of an electric signal from the cell body to the synapses can cause the fusion of small vesicles filled with neurotransmitter molecules with the synaptic membrane and release its content to the extracellular space between the two neurons, known as synaptic cleft. The binding of the neurotransmitter to the postsynaptic receptor triggers chemical processes that result in the creation of electrical signals in the postsynaptic neurons, thus completing the information transfer.

The transfer of information between individual neurons in the brain occurs via a carefully regulated release of chemical
neurotransmitters.

The neurotransmitter release is a very fast and complex process, which requires a precise spatio-temporal coordination of biochemical processes involving presynaptic proteins. Not every synaptic vesicle can be released: other biochemical processes are involved in priming some of the vesicles for release, to form the so-called readily releasable pool. These processes are mostly carried out by macromolecular protein complexes, which, in many cases, exist in transient form and survive only for the time required for them to exert their function.

Imaging neurotransmitter release
Electron microscopy (EM) can be used to image biological samples, similar to conventional optical microscopy. In EM, the use of a beam of electrons, rather than visible light, makes it possible to reach a much higher level of resolution than standard microscopy. During EM observation, however, samples have to be kept in a vacuum. This is major problem in the case of biological systems, because water, which constitutes a large component of the sample, evaporates in the vacuum, leading to irreparable sample damage. Chemical fixation followed by controlled dehydration can be used to partially solve this problem, which makes EM suitable in the study of the structure and function of cellular organelles. Nonetheless, this technique still causes sample alterations that preclude the study of cellular processes at a molecular level.

Cryo-electron tomography
In cryo-EM, samples are cooled so fast that water molecules do not have enough time to reorient and form ice crystals, which brings them to a glass-like solid form, called a vitreous state. Dr Vladan Lučić at Max Planck Institute of Biochemistry is an expert in the use of cryo-EM in combination with tomography, a method in which multiple images of a sample with different orientations are combined to form a three-dimensional image (tomogram). This approach yields high resolution, three-dimensional images of fully hydrated, vitrified cellular samples, preserved in their native environment and state. Using this method, Dr Lučić and his collaborators have for the first time been able to image protein complexes and vesicles, both at synaptic ends, ready to release neurotransmitters, and in the process of being transported along an axon. This is an important result, as it confirms that the vesicles and the protein complexes involved in the releases of the neurotransmitters are likely to be synthesised in the cell body and then transported through the axon to the synapses, and provides a simultaneous view of both the protein cargo and the lipid membranes involved in the transport. 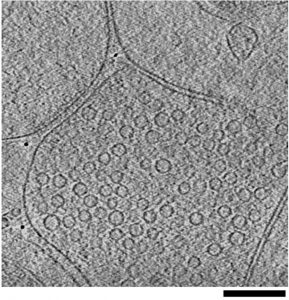 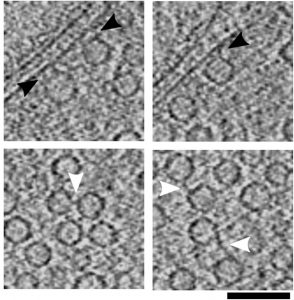 Synaptic vesicles and neural activity
Cryo-electron tomography experiments carried out on biochemically isolated synapses from rodent brains show that, at the active zone, which is a synaptic area where neurotransmitters are ready to be released, the synaptic vesicles are kept tethered to the synaptic membrane by different types of filaments, which, together with filaments that interlink vesicles, act as the main structural elements organising the vesicles. To understand the function and role of these filaments in the neurotransmitter release process, Dr Lučić and his collaborators have developed automated software procedures that make it possible to analyse the morphology, precise location and interrelation of these complexes at synapses imaged under different release-relevant states. They found that these filaments are dynamic structures that respond to synaptic stimulation and regulate the clustering of the synaptic vesicles by limiting vesicle dispersion at rest and allowing the vesicles to mobilise for release during synaptic activity.

Cryo-electron tomography has the potential to provide a detailed molecular picture of the mechanism of neurotransmitter release at
synaptic membranes.

Based on these findings, Dr Lučić has proposed a structural model of neurotransmitter release, in which synaptic vesicles are initially linked to the synaptic membrane via long tethers, and may acquire multiple, shorter tethers in subsequent steps. This change in their structural organisation makes the vesicles primed for the release of neurotransmitters in the synaptic cleft.

Towards a molecular model of neurotransmitter release
Despite the unprecedented level of insight into the mechanism of synaptic activity made possible by cryo-electron tomography, a number of technical issues hamper the application of this method to fully unravel the complexity of vesicle priming and neurotransmitter release at synaptic membranes. One of the intrinsic advantages of cryo-electron tomography is that all components of a given sample are imaged at the same time. By contrast, optical microscopy can be used to image only those molecular species that are artificially labelled and made fluorescent. This fact complicates enormously the identification of molecules and their complexes in cryo-electron tomography, except in the case of very large complexes of distinct shape.

To address this limitation of cryo-electron tomography, Dr Lučić and his collaborators are currently pursuing two approaches. One of them consists in analysing synapses where a protein is genetically removed. This provides hints on the molecular identity of the structures that are missing compared to the unmodified synapses. The second approach relies on the development of template-free software for the detection and classification of membrane-bound complexes in cellular cryo-electron tomography that contain large number of different proteins. Some of the protein classes obtained with this method are sufficiently homogeneous to allow averaging using available procedures.

In which fields, in addition to our fundamental understanding of brain function, will your work have the largest impact?

<> While this work is guided by our interest in synaptic transmission, the method we developed is more general. It can be applied to other cellular targets where vesicles play a prominent role, such as the vesicular transport and the secretory system. Furthermore, we already extended our procedure to analyse molecular complexes that bridge the synaptic cleft, thus expanding the applicability to other types of cellular junctions, such as those prominent in the immune response and the development.

Cryo-electron tomography and synaptic transmission in the brain was last modified: August 2nd, 2022 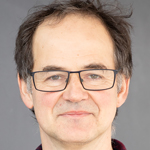 Vladan Lučić is a Project leader at Max Planck Institute of Biochemistry, working on cryo-electron tomography of neuronal synapses. He started research in neurobiology at the California Institute of Technology. Before that, he obtained a PhD in physics from the Northeastern University and a BS in electrical engineering from the University of Belgrade.

With the help of cryo-electron tomography, Dr Lučić proposes a structural neurotransmitter release model that gives insight into how the human brain processes information.