Temperature plays a vital role in plant development. Extreme hot and cold temperatures can perturb and even stop plant growth, dramatically affecting crop yields. Independent researcher Julian Schlubach looks at climate trends in an agro-region in Western Uzbekistan. He analysed local meteorological data and IPCC future climate projections to determine how the primary crops there have been and will be affected by a warmer climate.

Increased temperatures due to climate change will not only have a profound effect on human habitation through rising sea levels, droughts, and extreme weather. The impact of climate change also presents a massive challenge for agricultural food production. Rising temperatures are representing an increasing stress factor for plants across the world. This stress can to some extent be mitigated by evaporative cooling; however, this also increases water consumption. In this regard, rain patterns should be studied jointly with temperature trends. The study of arid and semi-arid areas allows to focus on temperature trends.

Uzbekistan has a continental climate with cold winters and hot summers. Western Uzbekistan is a semi-arid desertic area and with under 100mm of rain per annum, the region is highly dependent on irrigation from the Amu Darya watershed. Although cold winter temperatures influence agricultural plants, the primary risks in the studied area are increased summer and spring temperatures.

To show ongoing climate trends in the region and the expected timeline of changes in agricultural production, Julian Schlubach looked at day and night temperature trends and compared them with the Intergovernmental Panel on Climate Change (IPCC) future climate model. He then related these temperature trends to known physiological tolerances of plants grown in the region. Schlubach also showed how his temperature analysis could be integrated into downscaling models for agriculture in other regions around the world.

Temperatures may become such that rice and cotton are no longer viable summer crops by the 22nd century.

Western Uzbekistan climate study
Four meteorological stations were selected from around the region, with a considerable distance of about 100km between stations located to the north and to the south. Seasonal variations between the stations have been mainly explained by their south–north location as well as by the presence of vegetation and water masses or of desert ranges in their vicinity.

Schlubach selected two five-year periods between 1986–1990 and 2013–2017 and took meteorological data from the four stations. The two time periods, separated by 23 years, would provide a trend analysis over 33 years, coupled with the trend models over the 21st century from the IPCC. This level of data would give a big enough statistical value for the day and night temperatures over a suitable period to determine the effect on agriculture in the region.

Effects of temperature on agriculture
Temperature is an essential factor in every stage of a plant’s life, from germination to growth, flowering and seed production. Although most studies on the effect of climate change on agriculture have focused on drought, seawater inundation from flooding, etc., higher temperatures can also affect plants growth and yields.

Schlubach’s research looks at data from temperature trends in the region to provide insights into future crop yields and changing cropping seasons. The methodology for this research can also be adapted with complementary field studies to allow for downscaling models for different areas in Central Asia and beyond.

Temperature trends in West Uzbekistan
According to the IPCC, the central Asia region has, on average, warmed by 1–2°C, with substantial regional discrepancies based on hydrological and geographical differences throughout the region. Although the model is not bespoke to this sub-region, it gives something to compare with the data from the four meteorological stations. For this study, the most robust climate scenario was selected for trends to the 22nd century, which would indicate a 3.7°C increase by the end of the century.

Schlubach’s study used the temperature of 35°C as a metric. If day temperatures fell above this, it would be considered a day that plants’ health was negatively affected. 20°C was regarded as the minimum night temperature. The study also measured the number of winter days below 0°C to assess the level of winter warming.

Through evaluating trends from the two five-year periods from 1986–1990 and 2013–2017 across the four stations, an apparent upward trend in the number of days above 35°C was seen. These increases ranged from 0.39 to 1.19 days per year. However, although there was a slight reduction in days below freezing, it was not as pronounced as the increase in spring and summer temperatures. Based on the IPCC prediction of trends leading into the 21st century, the number of hot days will likely continue to increase. The estimate shows that the number of days above 35°C will increase in the most affected weather station area from 28 in 1986 to 164 in 2100. Thus by 2100, no single day would be suitable for plant growth over the May–September period.

The analysis also revealed that the times of the year which will see the most significant increase in hot days are in May and August, meaning that the summer is expanding. This could potentially indicate an earlier sowing time in spring for crops, but also a shorter period before crop growth is stopped in early summer.

Temperature increase effects on crops
This study has revealed a clear upward trend in the number of days with temperatures above 35°C and a shift in seasonality. Therefore, assumptions can be made that there will have to be adaptations for when crops are planted and that yields will be negatively affected in any case.

This critical and novel study reveals the stark reality for future global agriculture in the face of climate change.

Other studies have indicated that cotton and wheat yields will reduce by 19–31% and 13–32% by 2050, respectively. Although rice has a better resilience to heat, its yield is still likely to decline over the 21st century. Rice crops also increase soil salinity due to surface water evaporation and the reuse of irrigation water. The intensive use of water from the Amu Darya resulted in a doubled salinity over the 1960–1990 period. However, the increased early spring temperatures could be beneficial for some winter crops.

Temperatures may become such that rice and cotton are no longer viable summer crops by the 22nd century. The increased temperatures, coupled with the increased need for irrigation water due to the high temperatures and a considerable loss of Amu Darya outflow by 2050, means drastic changes in agriculture practices. Policies accompanying a transition toward more resilient agriculture are required in the region.

Implications for West Uzbekistan agro-region and beyond
This critical and novel study reveals the stark reality for future global agriculture in the face of climate change: negative feedback loops of higher temperatures, increased need for water, and increased water scarcity. This uncertain future is highlighted in this research in the study area of Western Uzbekistan, where crop yields are likely to reduce dramatically to the point where current crops will no longer be viable. At the same time, water usage will increase, and water availability will decrease.

This study will allow policymakers and agriculturists in the region to adapt their farming practices to change the planting timing or pivot to more resilient crops such as sorghum, millet or more resilient vegetables and fruit.

Although this study is limited by the possible inaccuracies in inter and intra-annual climate data variability, a general trend over time can be distinguished. The main uncertainty relates to the path of change. Further studies assessing trends in crop yields in comparable soil and irrigation conditions would allow refining the analysis at the local level. Besides, the analytical model could be fine-tuned with rain patterns and evapotranspiration data for use in other regions and sub-regions. This might allow us to anticipate agricultural adaptation processes increasing the resilience of agricultural production in the background of climate change.

Do you foresee a global shift from more traditional crops such as cotton and rice to more heat-resilient crops such as maize and sorghum?

Maize is more resilient but would still require an amount of water which may not be available in sufficient quantity in the studied region. Sorghum has lower yields but also requires less water. Besides, sorghum is already cultivated in the region. Resilient bushes like pomegranate have small leaves and maintain a cooler atmosphere inside the bush, which makes them a bit more resilient to high temperatures.

However, all those cultures have their own limits. If the temperatures continue to increase, at some point no crop production will be possible anymore. This doesn’t mean that there will be no more vegetation, but only fast-growing seasonal grass or slow-growing trees, bushes or cactuses.

The effects of climatic trends on agriculture in Western Uzbekistan was last modified: November 5th, 2021 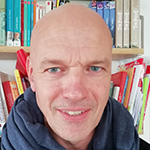 Julian Schlubach studies climate trends and their challenges for agriculture in Central Asia and Sub-Saharan Africa.

How to promote gender equity in the green economy
Behavioural Sciences
Read This Article
Climate change and the rise of infectious diseases: An Arctic perspective
Earth & Environment
Read This Article