While the field of robotics has made many exciting advances in recent years, designs of new robots are still generally being conceived by human engineers. Inspired by the evolution of organisms in nature, Professor A E Eiben at Vrije Universiteit Amsterdam, in The Netherlands, aims to show how robot designs may not need to be constrained in this way. Instead, they could pass on their advantageous traits to new generations, allowing them to adapt to unfamiliar environments. Named ‘EvoSphere’, this system could one day allow robots to perform tasks which, until now, have remained far beyond our reach.

Evolution by natural selection has fundamentally shaped every conceivable aspect of life on Earth. Over billions of years, the principle that organisms that are best adapted to their surroundings will be more likely to reproduce, and pass on their genetic traits to new generations, has allowed them to survive even in some of the most extreme environments.

Today, many researchers are aiming to draw from these principles, and apply them to our own physical technology. ‘Robots that evolve could develop themselves for given environments and tasks, akin to living organisms that have evolved to fit environmental niches on Earth’, Professor A E Eiben at Vrije Universiteit Amsterdam, explains.

In such a system, robots operating in unfamiliar environments could gather information about their surroundings, assess their performance in carrying out tasks, and use this data to conceive designs for new generations of robots – which could carry out those tasks more effectively. This would be directly comparable to the genetic mutations that emerge in living organisms over successive generations, which, over time, may give them an edge over their competitors. 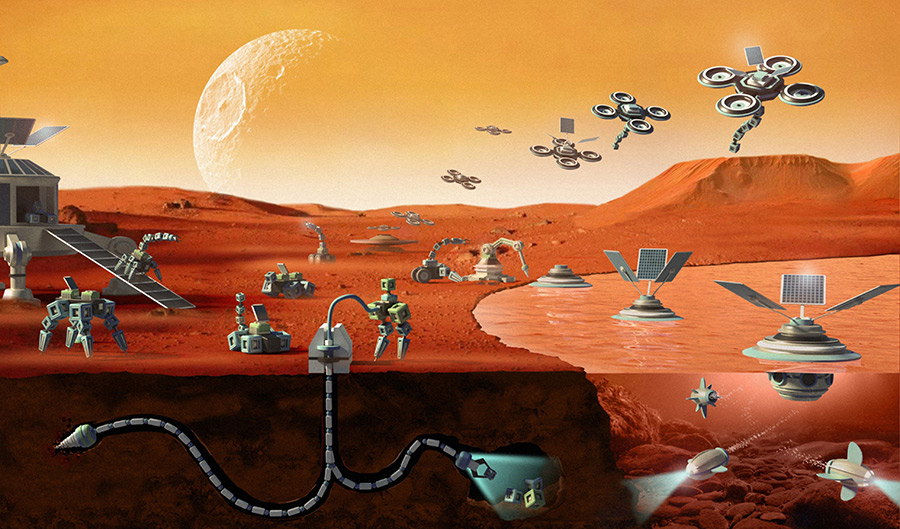 Robot evolution could be immensely beneficial to us – potentially allowing users to carry out incredibly demanding tasks in harsh and inaccessible environments. All the same, there are still many challenges to be faced before it can become a reality. In his research, Eiben explores how such systems could work, and how they could one day be implemented in real life.

Moving from software to hardware
The development of evolving robots may sound like an ambitious technological leap, but it certainly isn’t without precedent. For decades, researchers have looked to biological evolution for inspiration in developing new computer algorithms, which can generate new, more effective generations of solutions based on their current performance. The idea of using evolutionary algorithms to optimise robots has been around for more than two decades, but attempts were mainly limited to simulations because the technology to produce robot children was not available. These ‘evolutionary’ algorithms have now proved highly successful in a wide range of optimisation tasks: from molecular analysis for new drug candidates, to the engineering of new spacecraft.

This research delivers methods and know-how for developing robots in a radically new manner: evolving, instead of hand-designing them.

While this approximation of evolution has so far taken place in an entirely digital space, Eiben believes we are now on the cusp of a new technological leap. ‘Evolutionary Computing represents a paradigm change regarding the substrate where evolution takes place, a major transition from biological “wetware” to software’, he says. ‘Robot evolution represents a second major transition: from software to hardware.’

A comparable transition to the physical world has already been seen in the ‘Internet of Things’ – where groups of physical objects collect information about their surroundings using sensors, then process and share this data with other devices via the internet. In the same way, Eiben uses the term ‘Evolution of Things’ to describe the new phenomenon of evolving robots.

A number of key questions still need to be asked before the Evolution of Things can be realised, and implemented practically on large scales. Among the most pressing of these relates to how to select robot ‘parents’ and how to produce robot ‘children’. For constructing robot offspring, the solution lies in the combination of 3D printing and automated assembly. Given the current level of technology, manufacturing ‘newborn’ robots will also require human hands for a while. As for selecting parents, the mating of the fittest principle can be applied. To this end, the fitness of the robots can be evaluated by their ability to carry out certain tasks specified by their users. This can be automated, enabling algorithmic selection, but having the user in the loop is an additional possibility that can channel in implicit, subjective preferences that are hard to capture in a formula.

Selective breeding or natural selection?
Through his research, Eiben has identified two possible ways to address these challenges. The first of these is comparable to the selective breeding widely used by farmers – who might select which crops to breed next year, based on traits including their yield, taste, and resistance to disease.

Through a similarly supervised approach to robot evolution, a user would steer the process by selecting which robots should be reproduced based on their advantageous traits, and then repeat this selection across multiple generations, until a high-performing design is reached. This approach has its advantages, but if tasks or environmental conditions are changed, a user will then need to go through the entire process again – which will likely be costly and time-consuming.

Alternatively, an unsupervised approach would be less analogous to farming, and more towards natural evolution in wild ecosystems. Here, robots would decide by themselves with whom to mate. Improvements would happen more slowly in this case but, as Eiben explains, the approach is more autonomous than a breeding-farm scenario.

‘Unsupervised evolution is not using evolution as an optimiser, but as a force for continuous adaptation, allowing systems to operate for extended periods of time without direct human oversight’, he says. Since this evolutionary process is never-ending, it would allow robots to fluidly adapt to new tasks and scenarios, with no extra costs or time required on the part of the user. In this sense, there is no final solution to a given problem, and the robots’ evolution remains open-ended.

The Triangle of Life
Having established this background for the Evolution of Things, the next major challenge would be to determine the mechanisms and hardware approaches which could allow robots to actually reproduce and evolve by themselves. In particular, this involves establishing which aspects of robot hardware could actually become evolvable; these may include their shape, the number and position of their sensors, or the mechanisms used to move and signal to other robots.

In addition, there is a need to decide on how new generations of robots should be built: whether they are hand-crafted by engineers, or manufactured in fully automated processes like 3D printing. To address these questions, Eiben has developed a general conceptual framework for the Evolution of Things, named the ‘Triangle of Life’. ‘An essential requirement for a working robot-evolution system is an appropriate system architecture that integrates all necessary components’, he describes. ‘This model identifies three main stages in a robotic life cycle and defines three principal system components.’

Evolving robots which can readily adapt to harsh extraterrestrial environments could be used to build a functioning settlement before we even arrive – without posing any unnecessary risk to human life.

The first corner of the triangle can be thought of as a ‘birth clinic’, where new robot designs are created – comparable to creating the phenotypes (plants or animals) coded by the genotypes (DNA) of living organisms. The robotic genotypes are received by a fabricator, and used to create physical copies of the designs through 3D printing – while incorporating pre-fabricated sensors and actuators, which are attached in positions determined by the genotype.

In the second corner, the newborn robots pass through a ‘nursery’, which provides an environment for individual robots to learn, and control their bodies to perform simple tasks – increasing their chances of success in the real world. If robots perform poorly at this stage, they can be removed from the system, and their bodies recycled, ensuring that their faulty traits aren’t passed on to future generations. 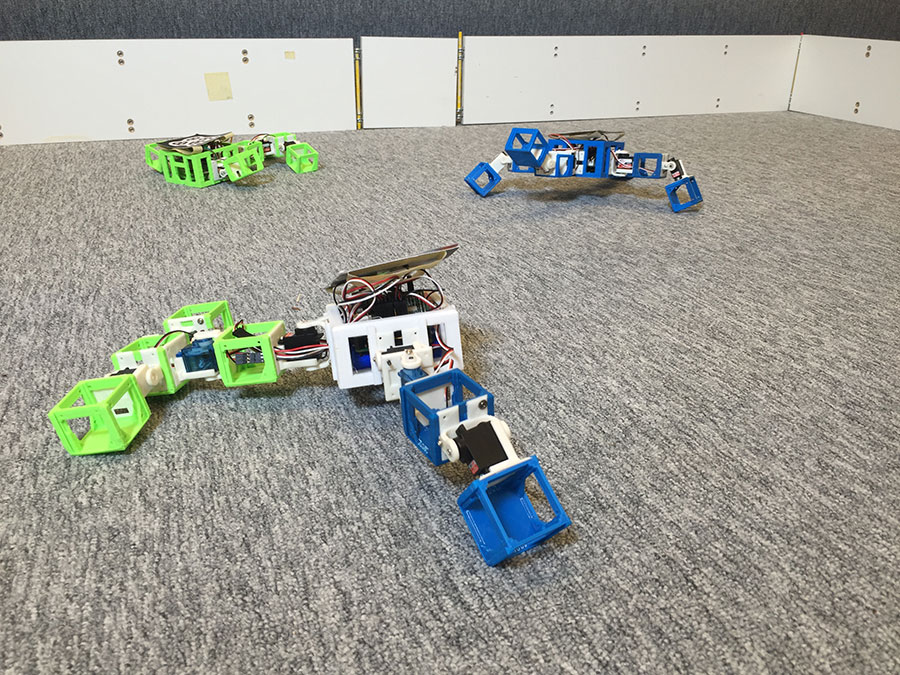 If a robot acquires the necessary set of skills in the nursery, it is then deemed to be a fertile ‘adult’, and passes into the final corner of the triangle: the real world. Here, the robot must survive, carry out the instructions of its users, and potentially be selected for reproduction. In this case, it recombines its genotype with the genotype of another robot (the mating partner) and will pass the new genotype to the first corner of the triangle – complete with insights into how its design could be improved further.

Introducing: EvoSphere
In identifying these three key stages, the Triangle of Life ensures that robot reproduction doesn’t need to be confined to a single approach – so that it isn’t strictly necessary to decide beforehand on how evolution should play out. Building on this concept, Eiben has now introduced ‘EvoSphere’: a research platform which could be used to study the evolution of intelligent machines, and to design them for practical scenarios.

‘The EvoSphere consists of a robot fabricator, a training centre where ‘infant robots’ learn, and an Arena: an operational environment where robots live, work and reproduce’, Eiben describes. Such a system could present exciting opportunities in the future: such as the establishment of self-sustaining human settlements on planets like Mars.

While this would present immense logistical challenges if humans were to build a settlement from scratch, evolving robots which can readily adapt to harsh extraterrestrial environments could be used to build a functioning settlement before we even arrive – without posing any unnecessary risk to human life. Through further improvements to EvoSphere, Eiben hopes that these types of application, currently far beyond our technological capabilities, will soon become closer to reality.

How close are we to seeing EvoSphere being implemented practically?

To be cynical: about €2M away. To be pragmatic: if we give up on fully automated fabrication of robot babies (and have experimenters finalise the assembly of new robots), then we are just a few (two to four) years away. If we go for the fully hands-free system, where an advanced combination of 3D-printers and robot arms constructs the robot babies, then it could take five to ten years, depending on the type of robots, their materials, components, sensors, and actuators.

EvoSphere: A system where robots can physically evolve was last modified: October 21st, 2022 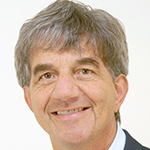