Biology
All animals need to find a way to avoid contact with pathogens when they are eating. For primates, Dr Cécile Sarabian, based at Kyoto University Primate Research Institute in Japan, shows that many species either avoid food contaminated with faeces or thoroughly handle the food, trying to clean it before eating. For the researcher, this is proof that this behaviour evolved as a way to reduce the risk of ingesting potentially fatal pathogens.

Animals can’t survive without eating. But if food is essential to supply nutrients and energy, it can also be a source of harmful pathogens with deadly consequences. As avoiding food altogether is obviously not an option, animals need a way to assess the quality of the food to minimise the risk of disease. 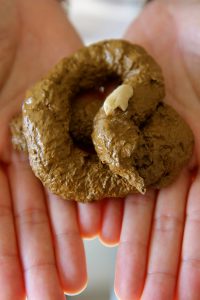 Instinctively, animals know to avoid food that is dirty or rotten, but what factors influence this decision? For many years, Dr Cécile Sarabian, based at Kyoto University Primate Research Institute in Japan, has been intrigued by what triggers this food avoidance, and how animals decide what to eat and what to leave. “We are only beginning to scratch the surface in understanding the diversity and effectiveness of such strategies in nature, as well as the mechanisms by which they are generated”, explains Dr Sarabian.

How to avoid contaminated food
Under normal circumstances, humans have nothing but disgust and revulsion for food stained with faeces. In fact, most animals have similar feelings about faeces (when not their own). This behaviour is not surprising given the number of infectious organisms present in animal excrements, from bacteria and viruses to protozoa and helminths. Captive primates may exhibit behaviours not observed in their wild counterparts, such as painting their enclosure with faeces; these animals have gathered a reputation for being rather liberal when they handle excrements. However, Dr Sarabian and her team have shown that it could not be further from the truth when it comes to the food they chose to eat.

Faced with food strategically placed atop replica faeces (made out of papier-mâché), most primates considered carefully whether to eat it or not. Mandrills opted to eat less of this contaminated food, while long-tailed macaques examined, smelled and manipulated the food thoroughly before eating. Bonobos also decided not to eat faecally contaminated food, and those that did often showed behaviours like rubbing food on the grass in an attempt to clean it, or even spitting it out after the first bite. Some primates seem to be less careful if the food item in question was a desired treat. Japanese macaques, for example, forgo of their food examination and/or reluctance to eat if they’re exposed to peanuts atop faeces, but they’re much stricter with dirty wheat.

Dr Sarabian found that it’s not just how the food looked, but also its smell. After some investigation, bonobos ignored the odour of a strong cleaning agent, but the whiff of faeces or rotten meat was enough to put them off their food. Similarly, chimpanzees were not fooled by the presence of non-smelling fake faeces but tended to eat less if the banana slices were associated with real faeces smell or if they were touching something with the consistency of faeces or biological contaminant.

This behaviour is not much different from what happens in humans. Everybody recognises a wrinkled nose and a raised upper lip as a sign that there is a bad smell in the area. This also causes a drop in heart rate and blood pressure, “both of which are hypothesised to prepare us for vomiting and therefore mimic the rejection of contaminants entering the body”, explains Dr Sarabian.

In addition to smell and touch, colour also seemed to be an important aspect for primates to spot bad food. Both chimpanzees and mandrills assumed that if the fake faeces were coloured pink, it was safe to continue eating. For long-tailed macaques, the reward (peanut) was probably too high to make any distinction between brown and pink faeces. Dr Sarabian suggested that seeing the shape of a potentially dangerous item but in the wrong colour is enough to relax any cautious behaviour. This distinction explains why adverts for sanitary pads use blue liquid rather than red to mimic blood, as this does not elicit a strong sense of disgust.

Getting used to the tricks
The aversion to food placed atop fake faeces decreased in successive experiments, suggesting the primates were getting used to it – potentially by using other cues such as touch and smell – and were beginning to ignore any signs of faeces. At first, some animals were extremely wary of the food, but eventually got used to it. “This finding may also indicate some degree of initial neophobia towards the experiment or these substrates, as subjects had not been exposed to them prior to experimentation”, said the researcher.

This habituation is the same as a medical student getting used to practising on a cadaver after a few lessons. It may be difficult at first to touch a cold dead body, but students find a way to get used to it and feel less nauseous as times goes by.

Male vs female
Despite these results, Dr Sarabian is quick to point out that this is not a universal response. Individual animals vary in their behaviour according to gender, age and even personal preferences. For example, female Japanese macaques were more hygienic than males in rubbing and/or washing soil-/sand-/faeces-contaminated food and eating less contaminated food. The team also showed that these females had lower levels of gastrointestinal infections, and this link between better hygiene and rate of infections supports the idea that disgust about contaminated food evolved as a plausible way to avoid disease. “These results have implications for our understanding of how behavioural traits might shape an animal’s health and more deeply, how hygiene might have evolved”, said Dr Sarabian.

Understanding the working of the disgust system could provide a vital contribution towards the understanding and conservation of the ecosystems of our planet.

When it comes to age, it’s all about experience. Not surprisingly, older bonobos didn’t want to eat food contaminated with fake faeces or soil, whereas younger animals showed less restraint. “These results seem to indicate that age may play a role in contamination-risk sensitivity”, said Dr Sarabian, “with younger individuals being less cautious, potentially to help them build their physiological immune system.”

Can this be used for conservation?
For Dr Sarabian, these results were confirmation that avoiding foods contaminated with faeces or rotting has evolved as a way for primates – and other animals – to avoid ingesting potentially dangerous parasites or pathogens. This idea is known as the parasite avoidance theory of disgust. The trick is not to see disgust as a personal and subjective experience, but as a mechanism that has evolved to detect signs of pathogens and encourage behaviours that may reduce the risk of disease. In a way, disgust is a form to avoid pathogens; the same way fear is a form to avoid being eaten by a predator. 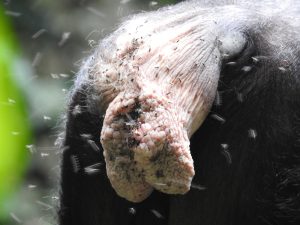 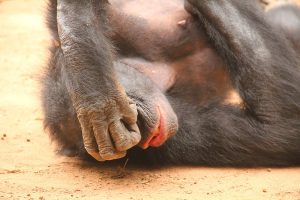 The field is still in its infancy for most animals, and there is a lot to uncover. While researchers already know about a vast array of different strategies to avoid contact with pathogens, there is no overarching idea to explain basic strategies and behaviours. It would be interesting to find out whether the response is expressed in relation to the degree of contamination, the perceived severity of the risk, the intensity of the cue presented or even in concert with the physiological immune system. This research would be extremely valuable to understand how these behaviours have evolved throughout primate evolution.

“In the longer term, understanding the working of the disgust system across species offers an excellent model for investigating the strategies, mechanisms and consequences of behaviour”, said Dr Sarabian, “and could provide a vital contribution towards the understanding and conservation of the ecosystems of our planet.”

Disgust could be used as a way to control how animals decide where they look for food. Using strategically placed odours and/or tastes could be enough to deter primates from entering a certain area. This would be a better alternative to more traditional methods like electrical fencing and acoustic deterrence, which are not based on the ecology of the species. 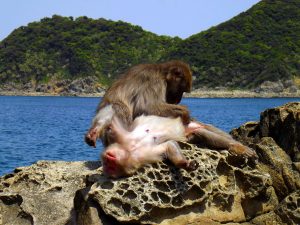 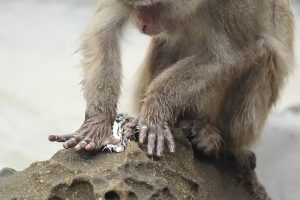 Individual animals vary in their behaviour. For example, female Japanese macaques were more hygienic than males.

On a larger scale, it can also be used to mitigate conflicts between humans and wild animals, and limit disease transmission. For example, our own disgust could be used to maintain human-wildlife distance in situations like wildlife tourism. This would apply, for example, when tourists want to get close to wild species to take the best picture, and ignore safety rules, such as keeping a distance or wearing a mask. This dangerous behaviour puts both humans and wildlife at risk and could have dramatic consequences for both sides. It could be as simple as sharing an information video with the tourists before their visit, showing spots of potential disease risk if they get too close.

Will you study conservation applications next?

<> My next project aims to investigate how contaminant odours may influence foraging behaviour in Asian elephants with conservation in mind. Elephants and their remarkable olfactory systems make an ideal new model for understanding how species perceive and react to parasite threats at both individual and landscape levels. In this project, we aim to investigate the mechanisms by which contaminant odours activate avoidance behaviour in elephants during foraging in order to develop a model of crop-raiding probability based on sensitivity to contaminant odours (disgust) and other socioecological and cognitive indices of wild elephants; and adaptive solutions.

That’s disgusting! How primates decide what not to eat was last modified: November 9th, 2020 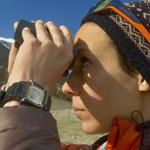 Dr Cécile Sarabian is a cognitive ecologist exploring the origins of hygiene and disgust through the evolution of behavioural, physiological and cognitive responses to parasites in animals. Her research aims to apply to conservation and global health in finding new solutions to mitigate human-wildlife conflicts and enforce human-wildlife distancing. 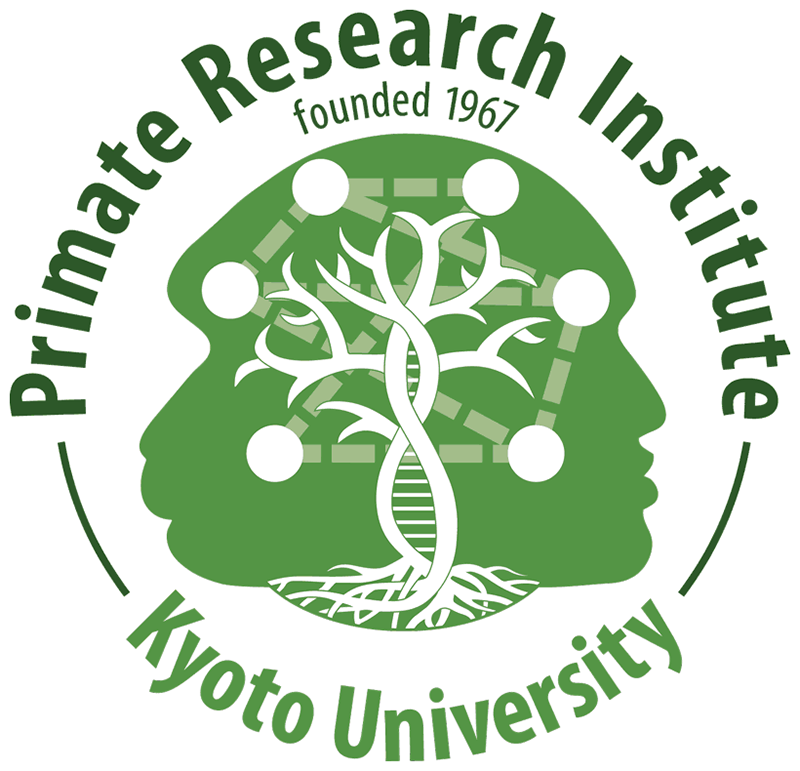