Health & Medicine
Researchers at the Avera Cancer Institute are using state-of-the-art fluorescent imaging to shed new light on the physical and biochemical processes behind apoptosis – also known as ‘programmed cell death’. The novel, cost-effective and user-friendly method uses three fluorescent stains, enabling the real-time, structure-function based identification of apoptosis in live, apoptotic tumour cells. This unique protocol developed by Dr Nandini Dey, in collaboration with Dr Pradip De, and with the help of Mrs Jennifer Carlson Aske is enabling the translational oncology research team to explore the efficacy of anti-cancer drugs in tumour models.

Every second, approximately one million cells in our body are destroyed by apoptosis and replaced with new ones. This process of ‘cellular suicide’ is critical for maintaining our cellular homeostasis and bodily health, and plays an important role in embryological, physiological and pathological conditions. In pathological conditions, cells bypass apoptosis, essentially living past their ‘use-by date’ and can become tumourigenic or cancerous by virtue of oncogenic alterations. In these cases, chemotherapies and anti-cancer drugs are used to induce apoptosis, preventing further tumour proliferation, with the aim of curing patients. Apoptosis is a therapeutic goal following the treatment of anti-cancer drugs. To ensure these drugs are working properly, it’s vital that researchers and health practitioners can accurately identify and quantify apoptotic cells. While several methods currently exist, most require expensive and sophisticated equipment and procedures such as cryo-microscopy, incredibly high resolution microscopy or specialised confocal microscopy. In addition, these methods use processed cell samples, rather than live cultures and cannot show the drugs’ mechanisms of action in the process of inducing apoptosis event-by event in a real-time manner in a standard laboratory set-up.

Changing this are Dr Nandini Dey, Dr Pradip De and Ms Jennifer Carlson Aske, based at the Avera Cancer Institute, South Dakota. The research group have spent many years studying anti-cancer drugs and their mode of action. In particular, their interest lies in the behaviour of tumour cells in response to treatment, and apoptosis is one of the main areas of focus in their laboratory. The method established by the group presents an event-based identification of the phenomenon of apoptosis in live cells which is enabling them to monitor the apoptotic cells following the anti-cancer drug treatment including conventional chemotherapy drugs, targeted therapy drugs and immune-therapy drugs in cells. 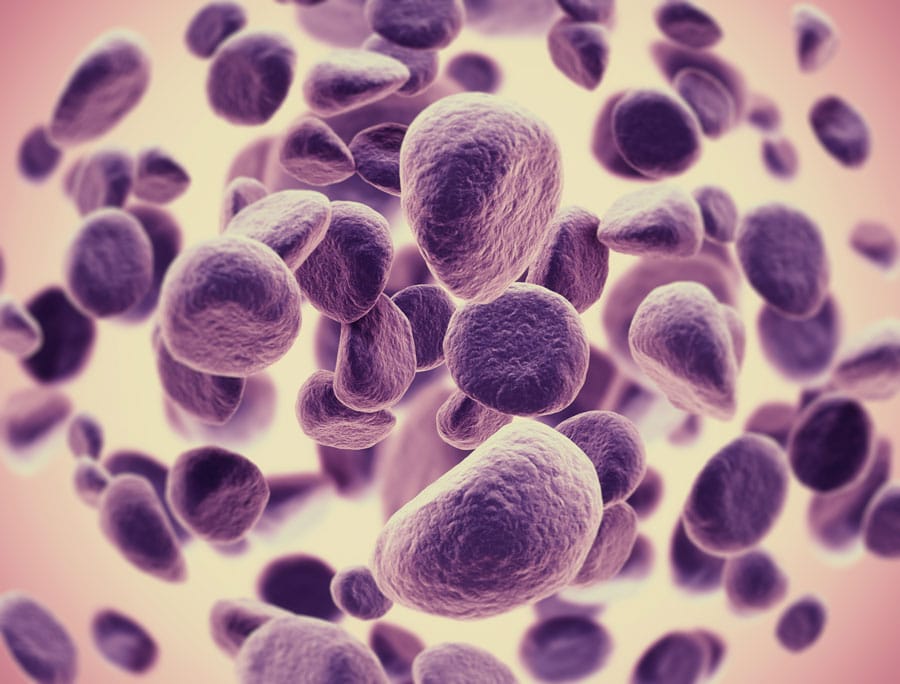 Setting out to improve the identification of apoptosis in live cells, the Avera Cancer Institute team have developed a cost-effective and user-friendly method to visualise the physical and biochemical processes behind apoptosis in live cells in real time. Recently published in Scientific Reports, the team show that this unique tool allows the efficacy of anti-cancer drugs to be determined, and has the potential to identify new drug targets. The novelty of this approach is that it identifies three sequential cardinal biochemical, enzymatic, and morphological events of apoptosis in a laboratory-friendly way.

What is apoptosis?
In a time of crisis, would you sacrifice one to save many? This is what our cells do: they are genetically programmed to ‘self-destruct’ if they suffer irreparable DNA damage, protecting the body from further harm. This ’programmed cell death’ is called apoptosis. Apoptosis is the hallmark of cancers. It involves certain morphological, biochemical, and physiological sequential steps controlled by a dying cell. Apoptosis is characterised by physical signs of cell shrinkage, rounding, nuclear shrinkage and loss of nuclear membrane integrity, plasma membrane blebbing, nuclear fragmentation and finally, cell fragmentation. 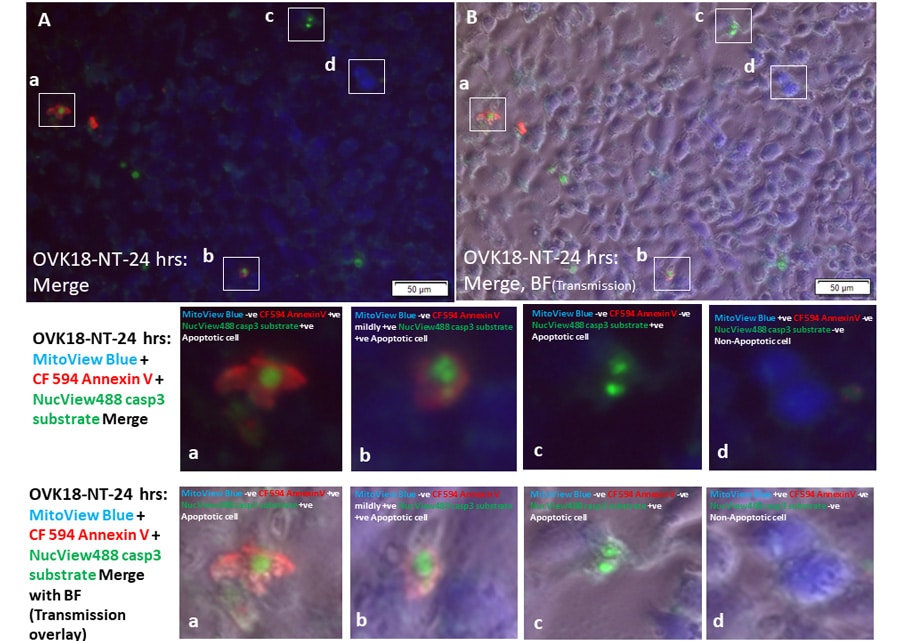 By tracking these well-regulated and sequential processes, researchers can observe the apoptotic effects of anti-cancer drug treatments on tumour cells and potentially identify new drug targets. This is where the research of Dr Dey and her group comes in. 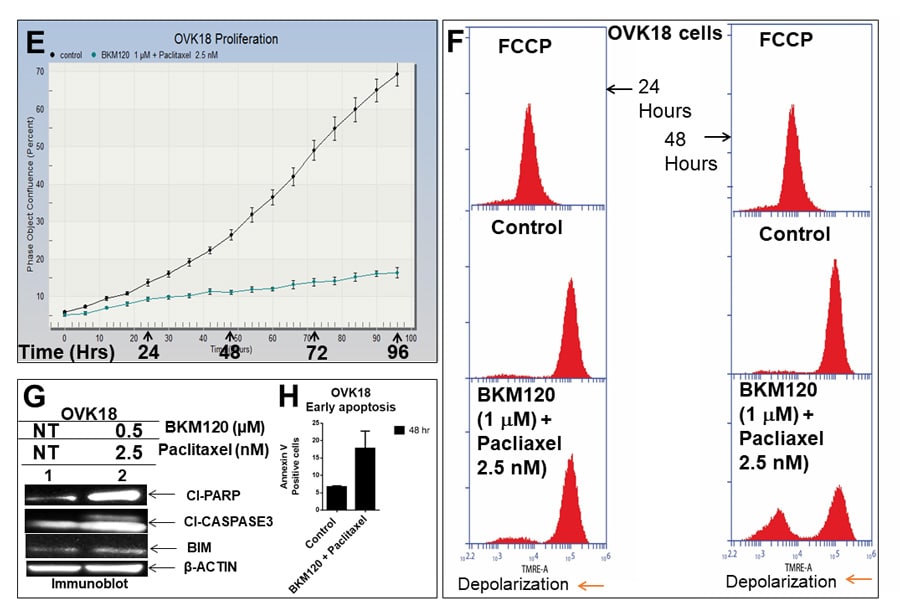 To induce apoptosis, the team treated two ovarian cancer cell lines – OVK18 and A2780 – with anti-cancer drugs called paclitaxel (conventional chemotherapy drug) and BMK120 (targeted pan PI3K inhibitor), either alone or in combination. The cells’ fluorescent patterns were then compared with those of untreated cells. Upon examination under the microscope, the researchers found that most untreated cells fluoresced bright blue, since their mitochondria were still intact. In contrast, treated cells fluoresced green and/or red. This was expected given that caspase 3 initiation and phosphatidylserine presentation only occur during apoptosis.

Movie #2: Immuno-fluorescence in GDC-0980 + ABT888 + carboplatin–treated MDA-MB468 cells: 3D projection movie from the confocal images (reconstituted Z-sections) shows the absence of nuclear Ki67 (yellow) and presence of cytoplasmic cleaved caspase 3 (green) in GDC-0980 + ABT888 + carboplatin-treated MDA-MB468 cells at 72 hours. Actin filaments are stained in red. MDA-MB468 cells double stained with Ki67 (Yellow) and Cleaved Caspase3 (green). Cells are negative for Ki67 and positive for Cleaved Caspase3. Actin is stained as the structural protein.

Validating the concept
To ensure that the anti-cancer drugs were responsible for these apoptotic effects, the researchers treated the ovarian cancer cells with different doses of paclitaxel or paclitaxel and BMK120 and imaged them at different magnifications and at different time points.
Unsurprisingly, proliferation of paclitaxel-treated OVK18 cells decreased or stopped, depending on the dose given, with apoptosis setting in after 48 hours and the simultaneous expression of apoptotic markers. Furthermore, these samples had a larger number of dead cells overall, compared to the untreated samples. Similar results were seen in paclitaxel and BMK120-treated OVK18 cells, with apoptosis setting in at 48 hours, however, this time, changes in mitochondrial activities first appeared at 24 hours.

Paclitaxel-treated A2780 cells took the longest to reach an apoptotic state, with the process occurring 48 and 72 hours after treatment. However, changes in mitochondrial activity occurred 24 and 48 hours post-treatment. This sample also had a larger number of dead cells than the untreated samples, proving that the paclitaxel causes cell death, therefore verifying the microscopy results. Thus using this protocol the group successfully identified the temporal and eventual pattern of drug-action in inducing apoptosis.

Identifying live and dead cells
In order to identify living and dead cells, Dr Dey and her group treated their samples with a new set of fluorophores. Dead cells fluoresced red while live cells were green. The mitochondrial potential was measured by flow cytometer while live-dead cells were read under fluorescent microscope. Fluorescent imaging comparisons using the ‘live and dead cell assay’ showed no overlapping of red (dead) cells and green (live) cells in treated and untreated samples.

In contrast, fluorescent imaging comparisons using their ‘triple-fluorescence staining assay’ showed overlapping of red (Annexin V positive apoptotic cells) and green (active caspase3 positive apoptotic cells) in treated and untreated samples; this is because green cells and red cells were at different stages of apoptosis. No overlap was observed between blue and red and/or green cells, and is to be expected since blue cells with active mitochondria were less likely to exhibit apoptosis, while red and/or green or both red and green cells were less likely to exhibit functional blue mitochondria. Interestingly, however, a few drug treated cells still displayed mitochondrial activity (blue fluorescence).

Why is this important?
While not all of these biochemical processes are specific to apoptosis and apoptotic events are stage-, time- and stimuli-dependent, the strength of the triple-fluorescence staining method lies in its ease of use and its ability to simultaneously stain three critical morphological and biochemical apoptotic steps – making it much easier to accurately identify apoptotic versus non-apoptotic cells. In comparison, most existing techniques rely on one apoptotic (but not necessarily apoptosis-specific) characteristic to identify and quantify these cells. Furthermore, triple-fluorescence staining can show apoptotic processes in live cells in real time – allowing researchers to see anti-cancer drugs’ mechanisms of action, and their efficacy. 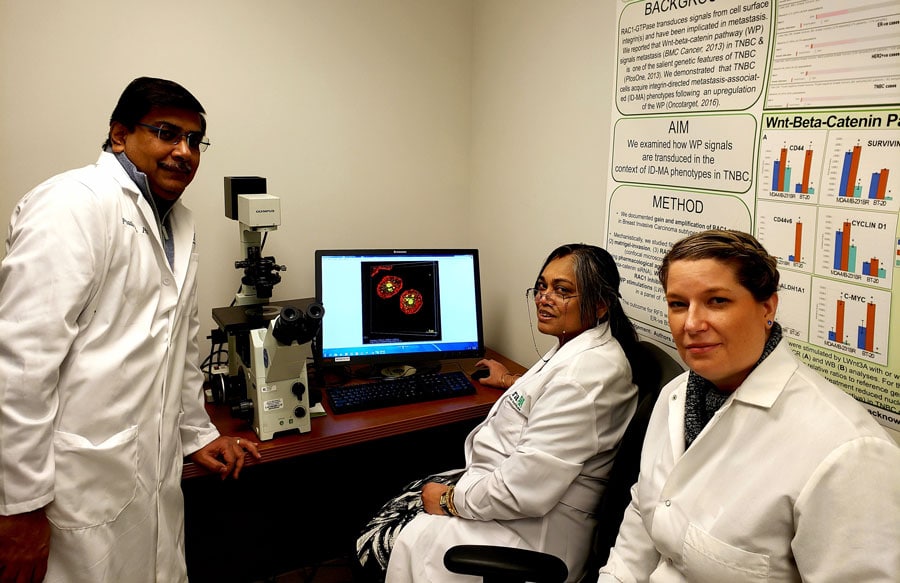 This laboratory friendly method can be standardized with minimalistic laboratory equipment and resources, making it a relatively cheap and accessible method that can be applied to any relevant drug treatment. Notably, it has already been used to observe the effects of different drug combinations on other tumour cell lines. The strength of this assay lies in its ability to identify modes of action of pro-apoptotic drugs in an event-based manner.

Why would some cells show red and blue staining in the ‘live and dead cell assay’?

<> The ‘live and dead cell assay’ was carried out to show live cells as green and dead cells as red. There is no blue colour in the assay. During the ‘triple fluorescence staining’ however, a few cells rarely showed red and blue staining under treatment conditions because, during the initial stage of apoptosis, mitochondria are still functional (blue) while their cell membranes have just started to show apoptotic features (red). These are really rare events and dependent on the drug used to induce apoptosis. In culture conditions, all cells are not in the same stage of apoptosis, and all cells were not synchronized for their stages of cell cycle.

What do you see for the future of this research?

<> Considering the laboratory friendly nature of the ‘triple-fluorescence staining’ in live cells, we expect that this method will become a commonly used laboratory tool to study drug effects in cancer research.

Although currently the protocol is validated and used in translational oncology, we think that this procedure will be meaningfully adapted in studies of apoptosis in other fields. For example, the phenomenon of apoptosis is a critical event in the field of developmental biology, regenerative medicine, and stem cells research. We envision that studies in the field of Parkinson’s disease, Alzheimer’s disease, myocardial ischaemia, myocardial infarction, and trauma-induced apoptosis will have the opportunity to use this protocol effectively. 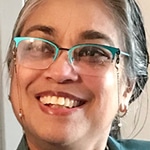 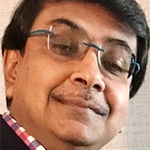 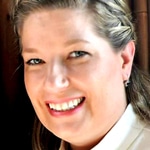 Dr Nandini Dey, M.S., PhD is a Senior Scientist, & Director of Translational Oncology Laboratory, Avera Cancer Institute, USA. She studies the biology of tumour cells in solid tumours with a special interest in cell phenotypes. Dr Dey is a member of the Royal Society of Medicine.

The Avera Cancer Institute team study anti-cancer drugs and their mode of action, in the context of tumour cell behaviour, including cell death by apoptosis.