Health & Medicine
Dr Ethel Nakimuli-Mpungu at Makerere University in Uganda works toward making therapy more culturally appropriate, particularly for people living with HIV and depression. She has developed a highly cost-effective group support psychotherapy programme that can be delivered by lay health workers and which has been shown to dramatically reduce depression symptoms and improve adherence to anti-viral medication in those affected.

The World Health Organisation (WHO) recommends that psychological interventions are used as first-line treatment options for mild to moderate depression in low- and middle-income countries. However, there is little data on the effectiveness of such interventions in some patient groups, including people with HIV, who are twice as likely to suffer from depression as someone without HIV. It is estimated that around one in three people living with HIV and taking antiretroviral medication (drugs that prevent the virus from multiplying) have significant symptoms of depression at some point in their life. People from African communities can also face stigma and concerns about being open about their HIV status. Despite this, most HIV treatment centres in sub-Saharan Africa do not screen for mental health problems.

It is already known that poverty is highly associated with depression; around seven of every ten of the 350 million people living with depression also live in poverty. Poverty is faced by many in African countries, and the lack of access to treatment for depression demands a new approach. Dr Ethel Nakimuli-Mpungu from Makerere University in Uganda seeks to overcome these issues by narrowing the treatment gap for depression among people with HIV. She set out to develop a culturally sensitive programme that could be implemented in African countries, and that would tackle depression in people living with HIV and AIDS, the disease caused by HIV infection.

The SEEK-GSP programme
The Social, Emotional, and Economic empowerment through Knowledge of Group Support Psychotherapy (SEEK-GSP) programme was developed by Dr Nakimuli-Mpungu and her colleagues in the Department of Psychiatry, University of Makerere, in collaboration with the Ugandan Ministry of Health’s Mental Health Program. The Ministry of Health is actively increasing its efforts to integrate mental health into primary health care. However, there are many barriers, including community, individual and institutional barriers to engagement.

Group support psychotherapy is not the same as a support group, although there is some overlap. In contrast to a support group, group support psychotherapy is led by a trained healthcare provider who facilitates psychological exercises or group activities. A support group is centred around discussions between group members about their experiences and struggles and is usually run by an individual who has experienced similar issues themselves. Further, the goal of a support group is often to help people cope, whereas the goal of group therapy is to help people change. Group support psychotherapy is a specific type of mental health treatment that brings together people with similar common mental health problems under the guidance of a trained health care provider. The approach treats depression by enhancing emotional and social support networks, the ability to practice positive coping skills, and income-generating skills. Many find that they feel less alone when they are part of a group and are able to share with others their experiences and strategies that may have helped.

It is estimated that around one in three people living with HIV and on treatment have significant symptoms of depression at some point in their life.

The programme includes eight weekly group sessions which cover the following topics; introductory issues, psycho-education about depression and HIV, sharing and externalising problems, positive coping skills to manage depressive thinking and excessive worries, problem-solving skills and skills for coping with stigma and discrimination, as well as training in basic livelihood skills and planning livelihood activities. Each session lasts two to three hours with practical take-home assignments to practice the skills learned during the session.

Trained lay health workers deliver group sessions
One of the major advantages of the SEEK-GSP programme is that it does not require ongoing input from expert mental health practitioners. Instead, primary healthcare workers in rural health centres are trained to deliver the GSP sessions. In turn, they are able to train lay health workers to identify individuals with depression and treat them through village-based weekly GSP sessions – thus empowering local communities to take control of their own mental health needs. The SEEK-GSP programme has already been successfully scaled up and integrated into HIV care in rural communities in three northern districts of Uganda.

To date, approximately 100 primary care health workers working in 30 health centres across three districts in northern Uganda have been trained. In addition to this, they have been able to subsequently train 200 lay health workers. This has enabled approximately 3,000 people living with HIV to undertake GSP in the past five years.

A success story
Unlike previous studies of group psychotherapies for depression, there was a high level of engagement with the SEEK-GSP programme, with 80% of participants completing all eight sessions. Dr Nakimuli-Mpungu identifies several possible explanations for such high rates. Firstly, they successfully got people living with HIV and depression involved in the development of the programme, therefore tailoring it exactly to meet their needs and also providing some ownership of the programme by those it is designed to help.

Secondly, the unique cultural appropriateness of the group sessions may have encouraged higher levels of engagement. The groups are gender specific and facilitated by health workers of the same gender, because problems faced by men and women can differ. The participants also get homework; for example, take-home assignments can include practice of social norms and values.

Other benefits of GSP treatment include the formation of a safe environment within a village, where participants are able to acquire knowledge and skills which enable them to experience a number of therapeutic processes despite personal, cultural and programme barriers.

Group members were also able to provide feedback and provide one another with support, both during therapy and in community groups outside the therapy setting. Opportunities to share experiences and give guidance to others can restore a sense of significance and increase self-esteem. Group members reported increased social relationships, indicating the development of socialisation techniques during GSP sessions.

Although the effects of GSP treatment on depression were seen in both men and women, the magnitude of the effects was largest among male participants. Given the low participation of men in health interventions in low resource settings, this finding suggests that integrating GSP for depression treatment into existing HIV service delivery platforms might confer additional value, particularly in attracting men and engaging them in HIV treatment services, thereby improving the health of the entire community.

Evaluation of SEEK-GSP
The most recent evaluation of the programme included 30 health centres which offer HIV care. The centres were randomly allocated the GSP sessions or group HIV education session. Following the eight-week programme, with data from almost 1,500 participants, the researchers were able to assess the effectiveness of the intervention.

Evaluation showed that GSP is effective in the treatment of mild to moderate depression, with almost everyone achieving remission within six months and remaining depression free 12 months later.

Evaluation showed that GSP is effective in the treatment of mild to moderate depression, with almost everyone achieving remission within six months. In addition, the participants remained free from symptoms of depression up to 12 months later. Interestingly, a greater effect was observed among males than females.

The group support sessions also reduced symptoms of post-traumatic stress, alcohol use, HIV-related stigma, and improved social support and self-esteem. The researchers also found that those who attended the sessions showed clinical health improvements, as well as mental health improvements, with improved adherence to anti-viral treatments and suppression of the HIV viral load. This means that affected individuals are less likely to transmit the virus to others.

The results from the SEEK-GSP programme show that it is possible to overcome barriers of poverty, remoteness, mental health, stigma and cultural ignorance to provide a comprehensive HIV care model in rural areas. Those who attend the programme feel more empowered to tackle their symptoms of depression, vastly improving their mental and physical wellbeing. Dr Nakimuli-Mpungu now wants to see similar approaches become embedded into other health serves across Africa, with access to group support psychotherapy being the norm for those living with depression and HIV.

How do you plan to implement the SEEK-GSP programme in more African countries?

<>The SEEK-GSP programme will be scaled to reach more people, cover a wider geographical area and also increase the variety of service offerings through a ‘Freemium’ model. This will look to achieve the goal of providing the service at no cost, or a greatly subsidised cost, to low-income beneficiaries, while allowing others in higher socio-economic categories to access GSP techniques via an online platform and pay premium rates to meet the cost of providing the service. The team will seek out grants from the largest non-governmental and governmental funders to support the delivery of the free services. 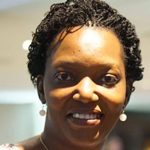 Etheldreda Nakimuli-Mpungu is a Senior Lecturer at the Makerere University in Uganda. She developed group support psychotherapy – a culturally appropriate evidence-based mental health intervention that improves social, emotional and economic wellbeing of highly stressed individuals in communities. She has received a Presidential National Independence Medal of Honour and an Elsevier Foundation Award. Nakimuli-Mpungu completed her doctoral degree in psychiatric epidemiology from Johns Hopkins University, USA.

Dr Nakimuli-Mpungu studies the effectiveness of group support therapy for depression among people living with HIV.