Biology
Jute is a commercially grown fibre plant that provides a natural resource for modern day fibre usage. With the lack of diversity in jute plants, the recent sequencing of the jute genome offers a wide range of gene targets for crop breeding. In parallel, the use of quantitative approaches to study the expression pattern of jute genes has taken precedent. However, for these approaches, universal reference genes are needed that allow accurate quantification of gene expression. A team of BARJ project at the Bangladesh Jute Research Institute have identified reference genes that provide a valuable resource for gene quantitation.

Jute is a bast fibre plant that offers a cheap, renewable resource for textiles. The fibres of its plant have multiple uses in everyday life, due to its strength, lustre, ability to absorb moisture and break down easily. With a recent increase in global demand of jute production, there has been considerable interest to understand the physiology and biochemistry of this important cash crop, to make better, healthier plants. The limited genetic variation in jute has, until recently, hindered advances in crop breeding. However, with the recent decoding of the jute genome (complete genetic information), there has been a growing interest to identify the functions of different genes in various aspects of plant growth and development. To perfect the methods of analysing the expression of genes in jute plants, a team of BARJ project have recently identified important housekeeping genes that provide basal references for gene quantification.

Dogma of molecular biology
The field of molecular biology involves the study of genes and their products in a living organism. The essential information necessary for the functioning of an organism is encoded in the DNA of a cell. DNA is the blueprint of life; it contains a string of chemicals that, in specific sequences, combine to form genes. These genes encode proteins that have various functions in a cell, including structural, responding to signals, and metabolic reactions. These proteins in turn determine the behaviour of a group of cells (tissues) which makes up an organism.

To perfect the methods of analysing the expression of genes in jute plants, a team of BARJ project have recently identified important housekeeping genes.

The central dogma of molecular biology is that the DNA in a cell makes a message (called messenger RNA, or mRNA) that subsequently makes a protein. There are numerous steps involved between a gene being turned on (or off) to synthesise an mRNA molecule, and it getting processed to form a protein. In this way, the information encoded in a gene is “expressed” as (i.e., changed into) an mRNA molecule, which is then decoded to make a specific protein.

How much matters
The amount of gene expressed in a cell generally determines the nature of its function in a particular location or metabolic pathway. However, gene expression is regulated at multiple levels within a cell or tissue. For example, signals from within the cell or external, can trigger switching gene expression on or off. These signals could be developmental or endogenous cues (such as changes in hormone concentrations), or external stress, which could be biological or non-biological. Once a gene is turned on, expression could continue for some time. Other signals could switch off the expression of the gene under certain conditions. Ultimately, the gene is made into an mRNA molecule. If the mRNA is stable and does not decay, then it is used to make a corresponding protein. Therefore the amount of gene expression in a given cell or tissue is very tightly regulated. If insufficient amount of the gene is expressed, then the corresponding protein may not get synthesised, which would then slow down or hinder a specific function of the cell or tissue. For example, if a gene for fruit ripening was not expressed enough, then the corresponding protein would not allow the reactions to take place that enable fruit ripening.

Number crunching genes
Sequencing of the jute genome has opened new doors to enable precision breeding of this fibre crop. However genome sequencing does not necessarily reveal the function of the genes; by annotating the genome, DNA sequences are compared with other known sequences and thereby putative functions are assigned to each gene. To verify the function of genes experimentally, identifying how much a gene is expressed as mRNA is a first step. Quantifying gene expression in a particular tissue, or in response to particular conditions would reveal the extent of expression of several genes, thereby indicating that particular genes are more likely to function in that tissue or in response to a signal.

Quantitative reverse transcriptase polymerase chain reaction (qRT-PCR) is a specialised technique in molecular biology by which mRNA is reverse changed to DNA using special enzymes. This DNA is then amplified exponentially using primers (bits of DNA similar to known sequences) via a chain reaction (PCR) to yield a DNA product which can be quantified. The reason for this amplification is because DNA is generally in minute amounts within a cell; therefore in order to study it in a laboratory it is amplified to get more of the same. In real-time qRT-PCR, the amount of a particular gene is quantified in real time relative to the expression of a reference gene, otherwise called a housekeeping gene. Algorithms are then used to perform statistical analysis of the gene quantification.

Perfecting housekeeping
Quantification of any variable needs to be assessed based on a reference value. With regards to gene expression analysis, the quantity of mRNA detected in each sample is compared with control references. These reference (or housekeeping) genes are thus named because they are those that do not change in their expression across developmental stages, tissues or stress conditions that the organism is subjected to. Whilst this is an ideal scenario, quite often a chosen reference gene might be expressed at a constant amount in certain tissues, but not in others. This is because expression of a reference gene can change with different tissues, treatments, and across organisms. Therefore what is considered a reference gene in one species might not be the same in other species under the same or different conditions. This makes qRT-PCR more challenging, as a universal reference gene is very unlikely.

This study will lay the foundation of several functional genomic studies and gene expression analysis in jute plants.

In jute, sequencing of the genome has led to a surge in interest in discovering the functions of the genes, so they can be used to breed better jute plants with enhanced qualities. To enable accurate quantification of gene expression via qRT-PCR, there has been no systematic validation of reference genes in the jute species Corchorus olitorius. A team of BARJ project have recently performed a thorough analysis of suitable housekeeping genes in this species that can be used for real-time qRT-PCR. 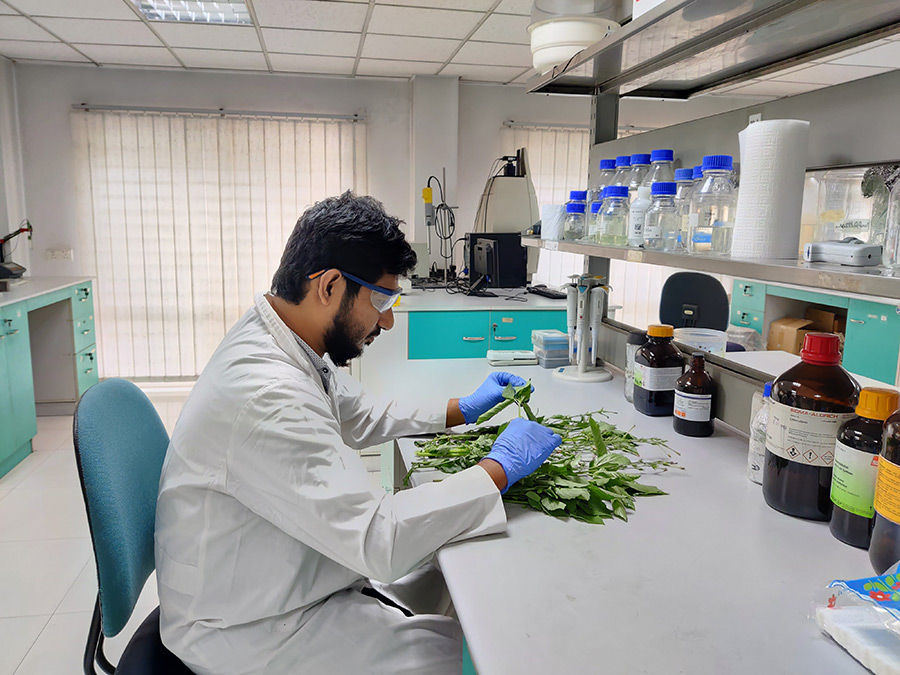 Choosing the right one
To understand the genetic basis of the formation of jute fibres, studying the gene expression profile across tissues and treatments would be beneficial. Dr Shahidul Islam and his team set out to identify reference genes in C. olitorius by using eight different tissues and four different stress conditions. Using four different algorithms, the authors identified eleven different reference genes that were stable in their expression in different tissues and stress conditions tested. The authors concluded that it is best to choose more than one housekeeping gene for a given species, following assessment of expression of these genes across tissues and treatments. This study will lay the foundation of several functional genomic studies and gene expression analysis in jute plants.

From your analysis, what will be the first gene that you select for functional analysis in jute?

<> From the results of our experiment, we would like to go for the functional analysis of PP2Ac gene first because it shows stable expression among different tissues, under biotic, salinity and waterlogged conditions. PP2Ac is the catalytic subunit of Protein Phosphatase 2A (PP2A) which is one of the critical control elements having important roles in every eukaryotic cellular processes as it dephosphorylates many different substrates to regulate their function. PP2A was found to be involved in signal transduction pathways, hormone biosynthesis, the regulation of cell cycle, metabolism, stress response and defence. Therefore, PP2Ac should be the first choice for future functional analysis.