Iridium (Ir) is a fascinating element. A rare metal found in the Earth’s crust, Ir can bond with a variety of other elements to make different metal complexes. Such complexes have unusual and interesting interactions with light, with many complexes exhibiting strong luminescence on long timescales. This has made them widely used as molecules for bioimaging probes and organic light emitting diodes (OLEDs) that can now be found in most display devices, from phones to computer screens. Professor Shin Aoki at the Tokyo University of Science has been designing new Ir-based complexes for not just the aforementioned applications, but cancer treatments as well.

Luminescence is a phenomenon found everywhere, from the deepest depths of the ocean to outer space. It is responsible for the distinctive glow of fireflies and the eery glow and fantastic colours of many deep-sea creatures. The power of luminescence is also harnessed in many of our electronic devices, from high-quality television displays to ‘flexible’ electronic displays that may be the basis of wearable electronic clothes and electronic paper in the future.

Luminescence occurs when a substance emits light without having been heated beforehand. Usually luminescence occurs when a substance has absorbed a small packet of light energy, known as a photon, and later reemits that energy in the form of light. The absorbed and emitted light do not have to be of the same wavelength, or colour, so it is possible to design substances that will absorb visible light coming from the sun, but emit a specific colour such as red. Not all luminescence has to be triggered by absorption of light either. Chemiluminescence is the name for light emitted as a result of a chemical reaction, and is what fireflies use to generate the characteristic lights seen on their tails.

While humans have found many ways to make use of luminescence, from using glow sticks as emergency lighting to security ink in bank notes, there has been a recent surge of interest in luminescent molecules, particularly those based on iridium (Ir). This has largely been driven by the development of more efficient organic light emitting diode (OLED) devices for use in electronic displays. OLED devices have rapidly become a popular alternative to liquid crystal display (LCD) screens as they do not require backlighting and pixels in the screen can be switched completely off to give a true black, rather than just a region where the backlight is dimmed. This allows for better contrast and generally higher image qualities.

The properties and behaviour of a metal complex are not just dictated by the type of metal the centre, but also very much by the type of ligands attached.

Ir-containing molecules have proved very popular for this application for their high luminescence yields, long emission lifetimes and stability with respect to chemical and light-induced degradation. By tuning the chemical structure of such Ir-containing metal complexes, it is also possible to tune their emission colours and properties, something which Prof Shin Aoki at the Tokyo University of Science is an expert in. Prof Aoki and his group have been designing and synthesising new Ir-based compounds for a variety of application, including as chemical pH sensors and anticancer agents.

Complex structures
A metal complex is a molecule that contains one or more metal atoms, surrounded by a series of ligands attached to the metal core. Ligands are like tree branches stemming from the central metal core and there are a multitude of types of ligands, differing in their size, shape and chemical composition.

Ligands are also very important in determining how a metal complex will interact with light. When a molecule absorbs light, this often leads to a movement of the electrons in the molecule to form what is known as an excited state. Such excited states are energetically unstable and can only live for a short time before the molecule tries to undergo energetic deactivation back to its original arrangement of electrons. For metal complexes, what this often means is that, on absorption of light, electrons are moved from the central metal to the attached ligands, or vice versa. 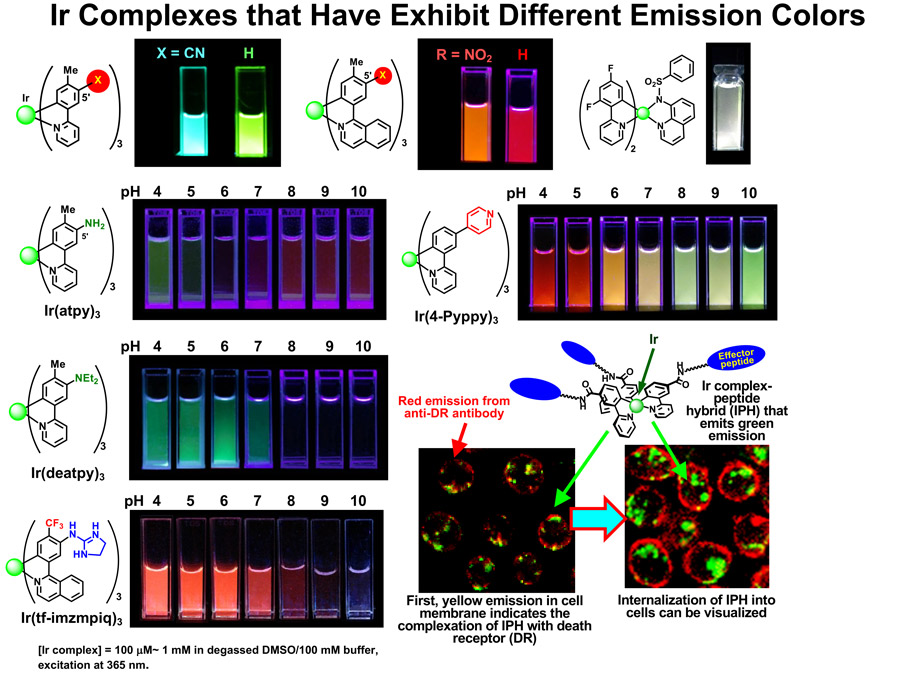 Prof Aoki has been deliberately tuning the type and arrangement of ligands around Ir centres to control this flow of electrons and energy in his cyclometalated Ir complexes, where the ligands form a ring with the central metal atom. What he has been able to do is create new Ir complexes with much longer emission timescales than previously synthesised compounds by playing a trick on the movement of the electron through the complex.

Electron tour guide
Previously, when designing metal complexes for applications such as photosensitisation and phosphorescent dyes, where long emission lifetimes are advantageous, it was common to put larger and larger conjugated ligands around the Ir core. However, while this worked to extend the lifetimes as desired, an unwanted side effect was that the efficiency of the emission process was negligibly improved.

This is why Prof Aoki took a different approach. Instead, he used ligands designed to facilitate a process called reversible electronic energy transfer. By having multiple ligands that are chromophoric (able to absorb light) physically close together and of similar energies, energy and electron density can be transferred between them reversibly. This provides alternative pathways for the movement of electron density rather than just relaxation back to the original electronic configuration that would result in quenching of the emission and a shorter lifetime.

Some of the specific ligands Prof Aoki’s group used to create complexes with very long lifetimes of over 90 and 200 microseconds included 6-N,N-dimethylamino-2-naphthoic acid (DMANA) or 6-N,N-diethylamino-2-naphthoic acid (DEANA), both of which are large ligands capable of creating cyclometalated complexes with the central Ir. Such ligands work well together for potentially promoting reversible electronic energy transfer processes as they have similar energies. Such complexes make excellent test systems for better understanding how these energy transfer processes work in large complex molecular systems.

Particular Ir complex-peptide hybrids created by the group have been used both to detect cancerous cells and to kill them.

Iridium cancer killers
The large amounts of light emitted by Prof Aoki’s complexes can also be used to shed light on what happens in the human body. One particular Ir complex created by the group has been used both to detect cancerous cells and then, to later kill them. The specific shape and arrangement of the ligands means that the Ir complexes can bind specifically to what are called ‘death receptors’ on the cancer cells. One of the main problems with current chemotherapy approaches is that the treatment is not specific enough to affect only cancerous cells, but often damages healthy surrounding cells as well, leading to numerous side effects.

The death receptors on cancer cells are of growing interest as they have a structure unique to cancerous cells, so drugs that bind selectively to these should not interact with healthy cells at all. Prof Aoki’s luminescent Ir complexes seem to meet that criterion and their bright glow means they can be seen in the cancerous cells using microscopy techniques. The Ir complex is also toxic to the cell, so after binding it eventually leads to cell death. However, the process is sufficiently slow that a single Ir complex could be used for both tumour imaging, diagnosis and treatment.

The widespread use of Ir complexes across many areas of chemistry means there is a constant demand for new designer complexes with carefully tuned properties for applications. Prof Aoki has not only created new, unique molecules for applications in medical imaging and treatment, but demonstrated novel ways of considering how ligand choice affects the resulting chemical properties.

What types of applications will you be targeting with your next series of Ir complexes?

<> We can apply this research to biological probes: there are so many luminescent (fluorescent and phosphorescent) probes, but their emission colours are mainly limited to the blue, green, yellow, red, and infrared red (IR) regions. A common problem though, is that if two different imaging probes emit light of similar colours, it is impossible to tell the probes apart. Our strategy would open a way for new time-resolved observation of intracellular molecules and events, even at same emission wavelength.

Secondly, Ir complexes can benefit photocatalysts that have long lifetimes – not only of emission but also excited states for energy transfer from Ir complexes to substrates. Lastly, we can apply this to circularly polarised luminescent (CPL) compounds having long emission lifetimes for new OLED. 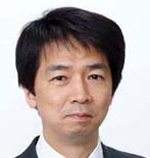 Dr Shin Aoki received his PhD (1992) from the University of Tokyo under the supervision of Prof Kenji Koga. He became an assistant professor at the same university, a postdoctoral fellow of the Scripps Research Institute (Professor Chi-Huey Wong), USA, and joined Prof Eiichi Kimura’s group at Hiroshima University, where he became an associate professor. In 2003, he was promoted to a professor at the Faculty of Pharmaceutical Sciences, Tokyo University of Science.